Diffuse idiopathic skeletal hyperostosis (DISH), also known as Forestier’s disease, is a systemic non inflammatory disease of unknown cause. It is characterized by the presence of osteophytes due to calcification and ossification of spinal ligaments and entheses. Moreover, diffuse idiopathic skeletal hyperostosis has been associated with a variety of metabolic disorders. However, to the best of our knowledge no association with non small cell lung cancer (NSCLC) has been reported so far. In the present study we report a case of a patient with NSCLC and DISH.

Diffuse idiopathic skeletal hyperostosis (DISH) is a non inflammatory disease of unknown cause, characterized by ossification of spinal ligaments and entheses [1]. Although it has been associated with a variety of disorders, no association with non small cell lung cancer (NSCLC) has been reported so far, to the best of our knowledge. In the present study we report a case of a patient with NSCLC and DISH.

A 65 year-old Caucasian male smoker (60 pack years) was admitted to our department complaining for minor dyspnea on exertion. He did not report any other symptom and his medical history was unremarkable.

Physical examination revealed digital clubbing and hypertension that did not need persistent treatment. Blood analysis was normal. Chest X-ray (Figure 1) showed a tumor-like opacity in the left upper lobe and calcification along the right anterolateral aspects of the vertebral bodies of the thoracic spine. Chest computed tomography (CT) confirmed the presence of a pulmonary mass in the left upper lobe as well as calcification and osteophytes along the right anterolateral aspect of four contiguous thoracic vertebral bodies (Figs 2, 3). The intervertebral height in the involved segment was well preserved without any degenerative disc disease and without any involvement of the sacroiliac joint. Bronchoscopy had no abnormal findings. The patient was submitted to fine needle biopsy of the lung lesion under CT guidance. The histological examination revealed adenocarcinoma of the lung. 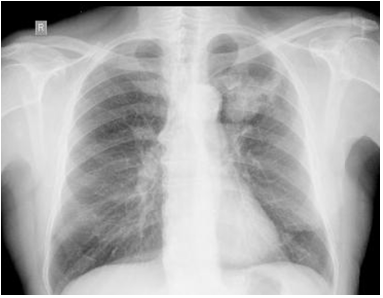 Figure 1. Chest X-ray revealed a nodular opacity in the left upper lobe and calcification along the right anterolateral aspects of the vertebral bodies of the thoracic spine 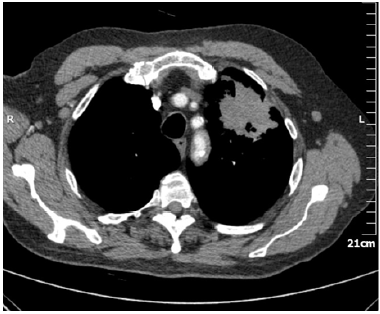 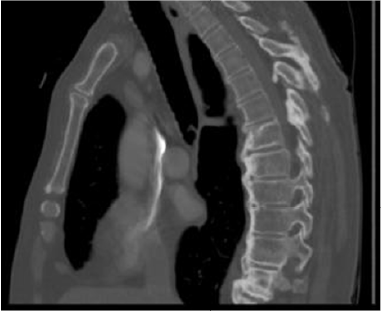 We present a case of a patient with NSCLC and diffuse idiopathic skeletal hyperostosis. The diagnosis of DISH is based mainly on radiological features. Resnick’s criteria are more often used and require at least four contiguous vertebrae to be involved, preservation of the intervertebral disc space and absence of any apophyseal joints or sacroiliac participation [2]. The case we present fulfills all these criteria. Usually, DISH concerns the anterolateral aspect of the vertebrae, what is compatible with the linear paravertebral opacity we observed on chest imaging [3]. The cause of DISH remains uncertain [4]. However, a variety of factors have been proposed to contribute to its pathogenesis, including mechanical (location of the aorta), environmental, related to treatment (derivatives of vitamine A) as well as genetic predisposition (HLA polymorphisms). Increased levels of growth hormone and insulin-like growth factor-1(IGF-1) have been observed in patients with DISH [5–7]. Moreover, a higher prevalence of DISH has been reported in patients with metabolic disorders, such as obesity, hypertension, diabetes mellitus, hyperuricemia, dyslipidemia and hyperinsulinemia [6−8]. Our patient, did not suffer from any of the above mentioned comorbidities except hypertension that however, did not need persistent treatment.

Usually, patients are asymptomatic, exactly just as our case and the diagnosis of DISH is based on an incidental finding in chest imaging. However, patients may present local symptoms depending on the distribution of the osteophytes, such as neck, thoracic spine or lumbar pain. Dysphagia or even airway obstruction have also been described due to osteophytes in the cervical spine [9, 10].

In the differential diagnosis a variety of diseases that appear with similar characteristics with DISH, such as osteoarthritis of the vertebral column and ankylosing spondylitis should be considered. In our case, the absence of degeneration of intervertebral disks as well as of any erosion and bone ankylosis of the sacroiliac joints excludes the above diseases.

On the other hand, lung cancer consists of the most common cause of cancer-related mortality worldwide [11]. Up to 85% of all cases concern NSCLC, while adenocarcinoma accounts for more than 50% of the cases [12]. So far, DISH is considered to be idiopathic and its etiology remains unclear. However recently, there is evidence that in lung cancer patients and especially NSCLC, IGF-1 plasma levels are increased [13], whilst several studies have shown the potential role of IGF-1 in DISH pathogenesis by increasing osteoblastic activity [5, 14]. The mentioned role of IGF-1 in the pathogenesis of DISH and its increased levels found in NSCLC patients, potentially, may imply an association between the diseases. Further studies are needed to confirm the above hypothesis. Unfortunately, concerning our patient, it was not feasible to measure his IGF-1 plasma levels.

We present a rare case of a patient with concurrent NSCLC and DISH, a disease with no special symptoms and thereafter usually underdiagnosed. Although DISH is considered idiopathic, the increased levels of IGF-1 in NSCLC and its role in osteoblastic activity and the pathogenesis of DISH, give a hint for a potential association between the diseases. However, this coexistence of DISH and NSCLC might be just incidental and not necessary clinically significant. Unfortunately, so far, there is not enough evidence to confirm any clinical associations between both disorders, while further research is needed to elucidate the link that might exist.