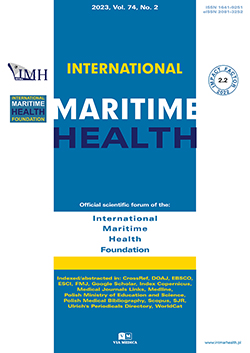 The Journal was established in 1949 and from then until 2018 it was owned by the Institute of Maritime and Tropical Medicine in Gdynia.

In 2018 the ownership of IMH  was passed onto the newly formed International Maritime Health Foundation (IMHF; www.IMHF.pl) which is now responsible for the maintenance of this periodical.

IMH publishes original papers, reviews, case reports but also letters to editors, book reviews and editorial materials. It is an open access magazine. Authors are not charged for publication.

The Journal has been included in the register of journals and proceedings of international conferences published by Polish Ministry of Education and Science on 2021 with 40 points awarded.