3Department of Pathology, Institute for Tuberculosis and Lung Diseases, Warsaw

The authors declare no finacial disclosure

Rheumatoid arthritis (RA) is a systemic disease that frequently involves the respiratory system. Interstitial lung disease (ILD) is one of the leading causes of RA-related mortality [1]. Disease-modifying anti-rheumatic drugs (DMARDs) have been shown to have a positive impact on the course of the disease.

Leflunomide, a DMARD introduced more than a decade ago, was reported to alleviate RA symptoms and retard radiological progression of the disease [2]. However, adverse-event monitoring revealed an increased risk of interstitial lung disease in predisposed individuals. These particularly included subjects with pre-existing interstitial lung disease or other lung diseases and a history of methotrexate treatment [3].

We present a case of a 54-year-old male with a RA-related interstitial lung disease treated with leflunomide, who had previously undergone methotrexate therapy and who developed rapid ILD progression.

A 54-year-old male with rheumatoid arthritis and a relevant smoking history (30 packyears) was admitted to our department due to rapidly progressing dyspnoea and dry cough. Data on the course of RA came exclusively from the patient’s family and a single discharge card. RA had been diagnosed 20 years ago and had been treated with methotrexate and steroids. The treatment had been withdrawn 6 months previously because of the progression of lung fibrosis, and was replaced by azathioprine; however, this therapy was also terminated due to drug intolerance. Two months prior to the present hospitalisation the patient’s consulting rheumatologist decided to initiate leflunomide therapy at a daily dosage of 20 mg, and the patient had been receiving leflunomide up to the day of admission. 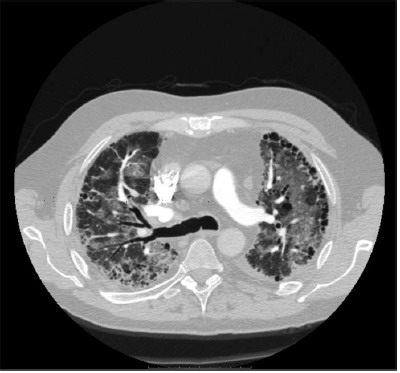 The modification of antimicrobial treatment resulted in five days of stabilisation. However, on the 9th day after admission the patient’s condition worsened and he required mechanical ventilation. The chest radiograph performed at that time showed progression of the interstitial opacities. The dose of methylprednisolone was doubled (250 mg once daily) and cyclophosphamide (100 mg once daily) was initiated, but no improvement was noted. The patient died on the 16th day of hospitalisation. 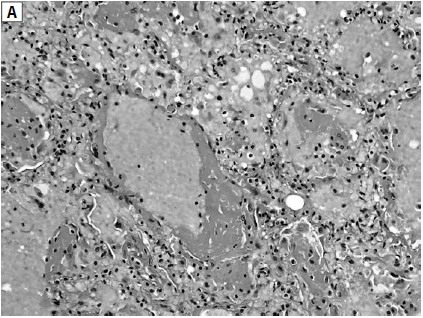 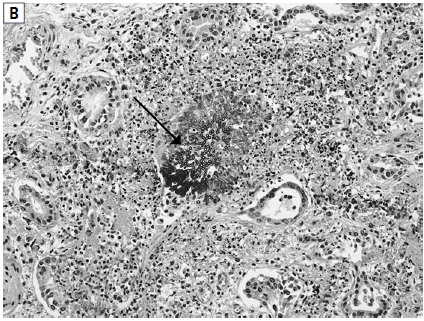 Respiratory involvement is the second leading cause of mortality in rheumatoid arthritis following cardiovascular diseases [1, 4]. Respiratory manifestations of RA include the following: pulmonary nodules, bronchiectases, bronchiolitis, pleural involvement and interstitial lung diseases, and, finally, infections related to immunosuppressive treatment [5, 6, 7]. The lifetime risk of RA-related interstitial lung disease is estimated at 7.7% and is related with a threefold higher RA mortality [7]. It is more frequent in males, in patients with late RA onset, and increases with RA severity. However, for evident reasons, these studies were performed in patients receiving RA treatment, and the potential lung toxicity of anti-rheumatic drugs cannot be excluded.

Leflunomide was licensed for the treatment of rheumatoid arthritis more than 10 years ago [8]. Since then, surveillance studies have carefully analysed its effectiveness and potential side effects. After alarming reports coming from Japan on 5 deaths in 16 RA patients who had received this drug [9], lung toxicity remains one of the major concerns related to leflunomide therapy. Ju et al. found an ILD incidence of 1% in a group of 1,010 RA patients treated with leflunomide in the Korean population [10]. Similar data were reported by Sawada et al., who estimated the prevalence of ILD to be 1.2% in Japanese patients with RA receiving leflunomide [3]. However, the exact relation between leflunomide use and ILD occurrence is being discussed. Studies published to date do not to clarify whether the increased risk of newly developed ILD or exacerbation of pre-existing RA-ILD is related to leflunomide itself or to RA progression. The authors indicate that patients with a history of chronic lung disease, pre-existing ILD, and prior methotrexate use are at a higher risk of developing ILD during leflunomide treatment (Table 1) [3, 10, 11]. Suissa et al. found that RA patients without any of the above-mentioned risk factors did not have a higher probability of ILD with leflunomide use [11].

Our patient had several risk factors for leflunomide-related ILD: male sex, a relevant smoking history, and long RA duration with a high disease activity, which imposed treatment modifications. Moreover, he had an eight-year history of RA-ILD and had been receiving methotrexate prior to leflunomide administration, both of which increase the risk of ILD development/exacerbation during leflunomide use. The first symptoms of lung injury appeared after nine weeks of leflunomide therapy. This time interval concurs with that reported by Chikura et al., who performed an analysis of 32 cases of leflunomide-induced lung injury and demonstrated that this condition usually occurs within 20 weeks from the onset of leflunomide administration [12]. The time relation between ILD progression and leflunomide use, ineffective antimicrobial treatment, and lack of evidence for viral infection in our patient indicated an association between ILD and leflunomide.

Leflunomide discontinuation is a cornerstone in the management of leflunomide-induced lung injury; however, no particular therapeutic algorithm has been established to date. Chikura et al. found that 75% of the reviewed cases had received steroids, 31% had received antimicrobial treatment, and 22% were treated with both steroids and antibiotics [12]. The elimination of leflunomide may be accelerated by cholestyramine, and this is a very promising treatment option [2, 12, 13]. Wong et al. reported a case of successful treatment with cholestyramine in monotherapy administered orally in a dose of 8 g three times daily [14], but further convincing data on the efficacy of this drug in the treatment of leflunomide-induced lung injury are required. In a recent review by R. Raj and K. Nugent, the recommended approach is that of leflunomide washout with cholestyramine; activated charcoal (50 mg every six hours for 24 hours) may also be considered to enhance leflunomide elimination. Nevertheless, the same authors present data that show that leflunomide discontinuation along with systemic steroids is the most frequently applied treatment [15].

Our patient presented a temporary response to combined therapy with steroids and antibiotics. The initial improvement suggested respiratory infection as the underlying cause of the patient’s condition, regardless of leflunomide discontinuation, as leflunomide is characterised by a half-life of 1−4 weeks [14]. That is why cholestyramine washout was not applied. The treatment had to be verified due to the patient’s deterioration after a five-day period of stability. We subsequently chose cyclophosphamide, which is potentially capable of inhibiting lung fibrosis, for add-on therapy as the patient had reported azathioprine intolerance. No data on the effectiveness of cyclophosphamide in leflunomide-induced lung injury are available. Unfortunately, an increase in the steroid dose and the addition of cyclophosphamide had no effect.

Autopsy findings revealed DAD superimposed on long-standing interstitial lung disease. The pathomechanism leading to DAD in our case is complex with at least three potential contributing factors: Aspergillus infection, leflunomide treatment, and RA itself. Ochi et al. [13] described a 75-year-old patient with RA who developed acute interstitial pneumonia 45 days after the onset of leflunomide therapy, and who had a very similar histopathological appearance of the lung, including features of Aspergillus infection. The probability of pulmonary aspergillosis in our patient seemed low; the radiological appearance of the chest was not typical for invasive Aspergillus infection (usually presenting as nodular lesions with a rim of ground glass — the so-called “halo sign” or the air crescent sign). Sputum cultures were negative and the patient’s condition did not allow bronchoalveolar lavage, so BAL fluid galactomannan and Aspergillus specific PCR could not be evaluated. Serum galactomannan and 1-D β glucan were not assessed. Of note, the sensitivity and specificity of the above-mentioned serological and molecular methods in the diagnosis of invasive aspergillosis are still being discussed [16, 17]. Despite progress in the diagnostics of fungal infections, up to 75% of invasive fungal diseases are diagnosed in autopsy [19]. In our patient, the presence of Aspergillus in the lungs causing tissue damage, a definite criterion of invasive aspergillosis, was also found in autopsy [17].

Chikura et al. have shown that there is 50% mortality in leflunomide-induced lung injury in patients with pre-existing RA-ILD [12]. According to Saito et al., a high serum CRP, lymphopaenia, hypoalbuminaemia, respiratory failure, and mechanical ventilation are also associated with a poor prognosis [18]. Most of these factors were present in our patient and may have contributed to the fatal outcome.

In conclusion, we advise caution in the use of leflunomide in RA patients with prior methotrexate therapy or pre-existing interstitial lung disease, because of the elevated risk of lung injury, a rare but potentially life-threatening condition. There is need for an effective diagnostic and treatment algorithm to improve the final outcome in patients with leflunomide-induced lung injury.