Direct burden of the cardiovascular disease in patients from a hospital in Guangzhou, China 2006–2015

According to the latest report from Chinese center for disease control and prevention, cardiovascular disease (CVD) had overtook the tumors and became the leading cause of deaths from chronic diseases in China in 2015. Meanwhile, China is a developing country with limited per capita medical resource. It is reported that the most CVD occurs in low-income and middle-income countries on a world scale, but little is known about the use of effective primary and secondary prevention medications in these communities [1]. There are also few reports on the situation of hospitalization and status of the economic burden of CVD. Therefore, the purpose of our study was to explore the epidemiologic characters of CVD inpatients and to reveal their changing conditions in a hospital in Guangzhou from 2006 to 2015, in order to provide an epidemiologic thread for disease prevention and clinical therapy in cities of developing countries.

We screen medical records from the database of a teaching hospital, which had collected information about more than 1,1 billion inpatients. We retrieve the medical records in which the main diagnosis was coded by I00-I99 according to the 10th revision of International Classification of Dise­ases (ICD) or 390–459 in ICD-9 for records prior to the implementation of ICD-10. Therefore, CVD in this essay was used as a general sense including cardiovascular, cerebrovascular disease and other diseases of circulation system. Cases with available age, gender, disease onset time, clinical diagnosis, hospitalization days and cost were included in this study, excluding the cases of congenital heart diseases. In all, there were 102,122 inpatients suffered from CVD in the study hospital from January 1990 to December 2015. Finally, we identified 102,122 inpatients (1990–2015) for age, gender and onset time analysis, 102,001 inpatients (1991–2015) for admission analysis, and 66,357 inpatients (2006–2015) for disease distribution, hospitalization days and cost analysis in this research. Likewise, hospitalization costs were converted into a single currency for the particular year (2015 USD).

In this study, we explored the direct disease burden of CVD by reviewing the clinical records from a hospital in Guangzhou. So our study does not require an ethics statement or written informed consents given by patients. We can confirm that the records was anonymous prior to analysis. The ethics committee of the first affiliated hospital of Sun Yat-sen University approved this retrospective study.

The analysis of clinical characteristics were according to a single hospital data. Statistical methods included frequency for categorical variables (age, gender, disease onset time and the main clinical diagnosis) and descriptive analysis for numerical variable (hospitalization days and cost). The disease onset time was grouped into 12 month groups. And the analysis of age constitution were grouped into below 26, six 10-year age groups from 26–85 years to 86 or above, respectively. The gender ratio was calculated dividing male number by female number. In the hospitalization cost analysis process, cost was converted into a single currency for the particular year (2015 in Guangzhou, China). The hospitalization cost was adjusted by calculating with the price inflation rates in Guangzhou during the study period to eliminate the influence of price inflation on hospitalization cost. The Statistical analysis was performed using SPSS (version 15.0, SPSS Inc. Chicago, IL, USA). 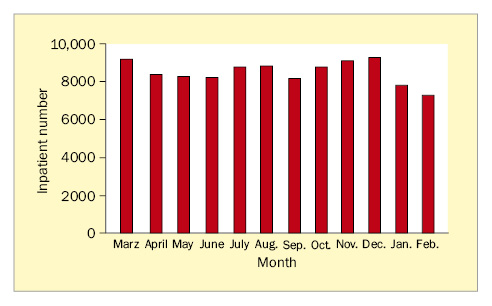 In summary, there were more CVD inpatients in this hospital at the beginning of winter and spring. 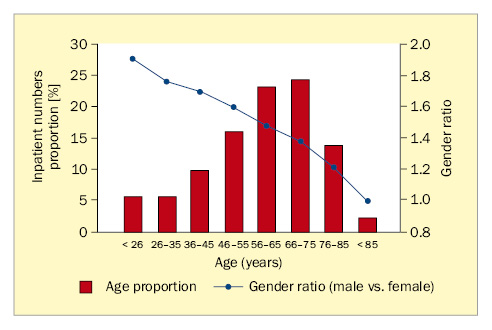 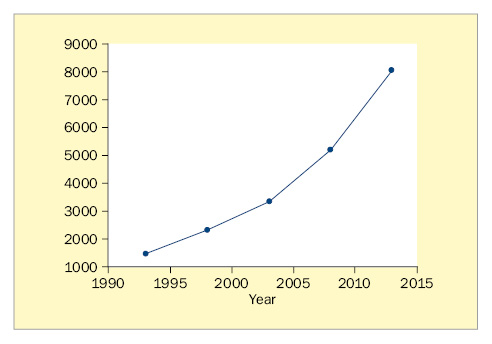 According to the Table 1, it can be seen that the ische­mic heart diseases accounted for the largest proportion (29.46%). The following were the cerebrovascular dise­ases (21.59%). Next came the hypertensive diseases (15.18%).

Hospitalization cost and the length of stay of cardiovascular diseases 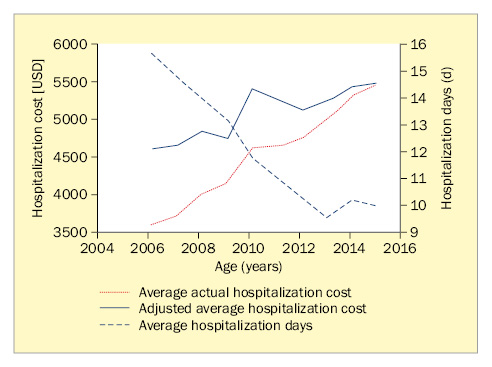 Admissions were increasing from 1991 to 2015 in the study hospital. Initially, it was due to an unhealthy living style. For instance, more people in Guangzhou were accustomedto a diet with high levels of salt and oil. Smoking and drinking became more popular than before in the daily life [2]. Likewise, many people working in the office lack of sports. It is reported that among a sample of patients with a coronary heart disease (CHD) or stroke event from countries with varying income levels, the prevalence of healthy lifestyle behaviors was low, with even lower levels in poorer countries [3]. The next reason is the working pressure in the modern society. People, especially the young people, had to work harder because of the working competition, which contributed to the onset of CVD. The following reason was that old people accounted for a large proportion in Guangzhou in recent years, just like many other cities in China. As we know, most risks of CVD are related to aging. Therefore, we could understand there will be more CVD patients in an aging society. Finally, medicine conditions in Guangzhou are improving. People have more knowledge about CVD, and the diagnosis technology is improving. It can make a sense that more CVD can be diagnosed at an early stage than before, and it also led to an increasing admission number in the hospitals [4].

According to our study, there were more admissions in the spring and winter in a year. To be specific, the number of admissions was the highest in December, and March ranked second. We can learn that there were more CVD inpatients at the beginning of spring and winter, when the weather was changing. We think there were several reasons. Firstly, the cold weather in the winter will cause blood vessels in the human body to constrict, which is an important cause of CVD. Secondly, people are susceptible to catch a cold in the changeable weather of spring. A cold is an important inducement of many CVD such as heart failure. A latest research suggested that the winter season was associated with a substantially increased risk of cardiovascular death among older Chinese cardiovascular inpatients [5].

Distribution of cardiovascular disease in admissions

The middle and elderly patients, especially people who were 66–75-year-old, accounted for the largest proportion of admissions. To begin with, many CVD are degenerative, so they often onset in or after the middle age. On the other hand, many risks of CVD, such as smoking and diabetes mellitus, are more popular in the middle and elderly people. It is evidenced that both early and late onset of diabetes are associated with increased risk of major CHD events and mortality [7].

Length of stay of admissions with cardiovascular diseases

Length of stay of inpatients gradually decreased in the study years. Many factors could affect the hospitalization days, for instance, illness severity [9], clinical complications [10], hospital management level [11], curative technology and so on. It is well known that the hospitalization day concern about the working efficiency and quality of the medical staff. So we can learn that the clinical diagnosis and treatment level of CVD specialty in our hospital is improving. How to further reduce the hospitalization days while guaranteeing medical quality and safety, is what we should pay attention to in the following days.

In our study, we found that more men suffered from CVD than women, but it was interesting to note that the gender ratio (male vs. female) showed a downward trend from 2006 to 2015. There were many reasons. Firstly, it is easy to understand men were more susceptible to CVD because of unhealthy living style, for example, smoking, drinking and more society pressure. It is reported that inequalities in cardiovascular risk factors by social class were higher among women than among men. Some cardiovascular risk factors such as smoking and obesity showed significant inequalities from a very early age [12]. Secondly, it was reported that the symptoms of CVD were always atypical in female patients, which may lead to fewer female inpatients in the hospital admissions. Thirdly, although there is lack of explicit clinical evidence, it is widely believed that estrogen is an important endogenous protection factor for women being free from the CVD. Likewise, we found that the gender ratio was still declining in premenopausal females. It suggested that there may be many comprehensive factors besides unhealthy male living habits are affecting the gender ratio besides the lifestyle and estrogen. And it deserves more attentions.

Cardiovascular diseases can greatly affect the life quality. In the coming days, there will be more people suffering from the diseases, especially the coronary heart disease and cerebral apoplexy, because of the aging population. Therefore, the prevention of CVD will play an important role in improving life quality. And more attention should be paid to the middle and elderly women. Our research is a single center study. So the sample size is limited, and its representation are somewhat affected. Meanwhile, this study is a cross-sectional study, and the extended follow-up information of these inpatients is not available at present. It needs further multi-center, long-term follow-up researches.

No authors have any conﬂict of interest to declare.