Coronary artery disease (CAD) surfaced as a multifactorial disease with acquired and inherited components and offers significant economic burden to developing countries like India [1]. The prevalence of CAD in Indian subcontinent is typically manifested between the age group of 20–40 years and 20–45 years respectively in young men and women [2]. CAD is characterized by atherosclerosis — a chronic inflammatory process involving accumulation of lipoprotein particles in the intima of the coronary artery and deposition of fibrous plaque containing smooth muscle cells, lipids, fibrous tissue and extra cellular matrix proteins [3, 4]. Accumulation of atheroma can limit blood flow to the myocardium resulting in ischemic discomfort and progressively leading to myocardial infarction (MI) [5]. Pioneering studies revealed the pivotal role of myeloperoxidase (MPO) in clinical presentation of atherosclerosis and development of coronary artery disease (CAD) [6]. MPO is an enzyme produced in the bone marrow during myeloid differentiation which accumulates in neutrophils and monocytes before their entry in circulation and is gradually released during inflammation upon leukocytes activation and degranulation [7]. Despite its antimicrobial activity, MPO has a strong pro-inflammatory feature that promotes tissue injury through oxidative damage at inflammatory site [8]. MPO plays an important role in the diagnosis and prognosis of CAD and elevated MPO levels frequently form the predictive marker for cardiovascular diseases [9].

A prominent functional polymorphism involving G to A base exchange at –463 (rs2333227) located in the promoter region was documented to positively elevate MPO transcriptional activity by reversible binding of SP1 transcription factor [12]. In addition, the clinical impact of –463G allele has been suggested in several diseases wherein MPO serum concentration were relatively higher to healthy controls activity was significantly elevated [13, 14]. Studies have shown that in myeloid cell lines –463G>A obliterates the binding site for SP1 that results in decreased the expression of MPO enzyme in the cell [12].

Another relevant polymorphism i.e., G>A substitution located at promoter position –129 upstream alters the transcription start site by abolishing SP1 binding efficiency [11, 15]. According to documented medical literature, there are no published reports mentioning the MPO gene polymorphisms in relation to CAD especially in south Indian population. Hence the present study was aimed to evaluate the association of MPO gene (–463G>A and –129G>A) in clinical presentation of CAD.

The study group included 200 patients (20–40 yrs.) with angiographically diagnosed clinical presentation of acute myocardial infarction admitted at the Department of Cardiology, Gandhi Hospital and Nizams Institute of Medical Sciences, Hyderabad, India. Patients presenting with systemic inflammatory disease, liver disease, cardiomyopathy, malignancy or any other heart diseases were excluded from the study. The control group consisted of 200 age, gender and ethnicity matched healthy individuals with no clinical or family history of CAD or clinical symptoms of any other systemic disease. The epidemiological variables like age, gender, nativity, occupation, life style habits, family history and clinical symptoms were recorded in the form of structured questionnaire. The study was approved from the institutional ethics committee for biomedical research. An informed consent was taken from the patients prior to the study and the objectives of the study were clearly explained.

Plasma MPO levels were assessed using enzyme-linked immunosorbent assay (ELISA) kit (Hycult biotech, Catalog number HK324, The Netherlands) based on the sandwich principle and the detection range of the samples was 0.4 to 100 ng/ml. The absorbance of the samples was measured by using a microplate reader at 450 nm.

Hardy-Weinberg equilibrium was tested for the MPO gene polymorphism and the association between genotypes and CAD was examined by odds ratio and chi-square analysis with threshold confidence interval (CI) of 95% using open EPI6 software (Open Epi Version 2.3.1, Department of Epidemiology, Rollins School of Public Health, Emory University, Atlanta, GA 30322, USA). The demographic and clinical data were expressed as mean ± standard deviation (SD) value and p values were calculated using Students’ paired t-test. Haplotype association of MPO gene polymorphism and CAD was examined by odds ratio with 95% CI employing single nucleotide polymorphisms (SNP) stats web server [17]. The coefﬁcient (D’) of pairwise linkage disequilibrium (LD) between the SNPs was calculated using the software haploview version 4,2 ref. All the p values were two sided, and the level of significance was considered at p < 0.05.

The demographic and clinical data of the CAD patients and controls is summarized in Table 2.

The mean age of CAD patients was 37.0 years and that for controls was 36.0 years. The differences between CAD patients and control subjects were statistically significant in all measures of established risk factors such as hypertension, smoking, alcohol and family history of CAD. The clinical data on TC, LDL-C and TG was found to be significantly elevated in patients than in healthy controls (p < 0.001) on the contrary HDL-C was higher in controls than their patient counterparts (p < 0.001). Myeloperoxidase levels were found to be significantly increased in patients when compared with controls (p < 0.04, Table 3) and there was no statistically significant difference found in distribution of –463G>A gene polymorphism in patients when compared with controls (p = 0.7, Table 4).

The frequency distribution of different genotypes in cases and controls are shown in Table 5 and 6.

Table 5. Distribution of myeloperoxidase (MPO) –463G>A and –129G>A genotype and allelic frequencies in patients and controls 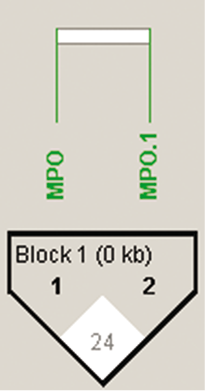 In recent years, several studies have confirmed that elevated concentrations of MPO are independently associated with increased risk of CAD [18–20]. Both the polymorphic variants MPO –463G>A and MPO –129G>A are located upstream of the translation initiation codon of MPO gene. These two variants have been reported to disrupt the SP1-binding site in an Alu hormone-responsive element and subsequently induce the down regulation of MPO expression, which in turn likely decreases the enzyme levels [21].

In the present study, we investigated the association of –463G>A polymorphism and MPO levels but we did not observe any significant difference between MPO genotypes and patients. A study carried out by Duzguncınar et al., (2008) [22] showed that MPO levels were elevated in Turkish patients with CAD and this increase is correlated with extent and severity of atherosclerosis. In our study we observed that increased MPO levels in CAD cases when compared with controls as similar to previous studies.

Our study is in coherence with investigation by Nikpoor et al., in French Canadian population (2001) [23] who reported recessive allele “A” being statistically associated with less probability of developing CAD. Another study carried out by Zhang et al., (2008) [24] suggested that the risk of premature CAD was significantly reduced with –463AA genotype and the similar results were observed in the present study.

According to Nikpoor et al., (2001) [23] MPO gene –463G/A polymorphism is related with changes in lipid levels and it is involved in the oxidation of low density lipoprotein, the high levels of MPO increasing the brittleness of artery plaque, there by converting the plaque from stable to unstable state, thus increasing the risk of Acute coronary syndrome. The MPO –463A allele could interfere with the binding sites of sp1 transcription factor, by reducing the level of MPO gene expression and its role in plaque formation, thus having a definite impact on risk of CAD. Meanwhile MPO may promote the oxidation of HDL-C and affect the reverse cholesterol transport, thereby interfering in the development of disease. In the present study family history, smoking, alcohol, TC, LDL-C and TG are independent predictors for early onset of CAD, thus conforming they are traditional risk factors contributing independently to disease.

In summary, in the present study we found that MPO levels were increasing in CAD but there was no effect of –463G>A gene polymorphism on MPO levels and in our study there was significant association of –463G>A recessive allele as well as genotype in the clinical condition of CAD. The presence of recessive allele offers a benign effect by down regulating the levels of circulatory MPO enzyme thereby implying lower oxidation of LDL and reducing atherosclerotic events occurring CAD. The haplotype analysis of our study revealed that SNP 1 of AA genotype and SNP 2 of GG genotype has a protective role in clinical condition of CAD. However there was no significant association observed for –129G>A polymorphism and CAD pathophysiology. However, there is no strong LD between the two promoter polymorphisms in both patients and controls. The study underscores the importance of MPO polymorphism and its associated down regulation as a protective confounder in atheroprotection in CAD.

This research received no grant from any funding agency in the public, commercial or not-for-profit.

The cooperation extended by the principals of Nims & Gandhi Hyderabad, and staff is highly acknowledged.