Abstract
Background: The aim of the study was to determine the prognostic value of 8-oxo-2’-deoxyguanosine (8-OHdG) plasma levels for cardiovascular complications (CVC) development in hypertension (HTN) and type 2 diabetes mellitus (T2DM) comorbidity.
Material and methods: One hundred fifty-six patients (mean age 61.71 ± 0.87 years) with the combined course of HTN stage II and T2DM (group 1) and 100 non-diabetic patients with HTN stage II (mean age 60.59 ± 0.87 years, group 2) were examined. Lipid, carbohydrate metabolism, plasma insulin, plasma 8-OHdG (by ELISA), blood pressure levels were measured. Observation period was 12 months.
Results: Plasma levels of 8-OHdG in the patients’ groups were significantly higher than in the controls (p < 0.001), in the group 1 higher than in group 2 (15.37 ± 0.27 ng/L vs. 14.00 ± 0.29 ng/L, respectively, p = 0.002). Plasma levels of 8-OHdG in group-2 patients who developed cardiovascular complications during observation period were significantly higher than in those without cardiovascular complications (16.47 ± 0.62 ng/L vs. 15.11 ± 0.29 ng/L, respectively, p = 0.046). The ROC analysis made it possible to propose the 8-OHdG plasma level ≥ 15.68 ng/L as an identifier for the cardiovascular complications in patients with studied comorbidity. In group 1, in patients with 8-OHdG plasma level ≥ 15.68 ng/L such cardiovascular risk factors as total cholesterol (TC) (p = 0.034), low density lipoprotein cholesterol (LDL-C) (p = 0.035), systolic blood pressure (p = 0.022), HOMA-IR (p = 0.046) were significantly higher compared with those whose level of this indicator was < 15.68 ng/L.
Conclusion: Determination of the plasma 8-OHdG allows not only for assessment of the severity of oxidative stress, but also for determination of the course and prognosis in comorbidity of HTN and T2DM.
Key words: arterial hypertension; type 2 diabetes mellitus; plasma 8-oxo-2’-deoxyguanosine; cardiovascular complications
Arterial Hypertens. 2022, vol. 26, no. 2, pages: 78–83
DOI: 10.5603/AH.a2022.0006

Hypertension (HTN) affects 26.4% of the world’s adult population, remaining the leading risk factor for premature death and disability worldwide [1]. HTN together with such common risk factors as dyslipidemia, obesity, smoking, hypodynamia, diabetes mellitus (DM) is causative for at least 70–75% incident stroke, 80–90% myocardial infarction [2]. The association of HTN and type 2 DM (T2DM) is estimated at 80% of diabetic patients [2]. At the same time, among patients with HTN the prevalence of T2DM is in 2–2.5 times higher than in subjects with normal blood pressure [2].

There are numerous studies suggesting that oxidative stress (OS) links vascular wall damage to the progression of various cardiovascular complications in diabetes [3]. One of the key role in the regulation of cells’ antioxidant protection plays the enzymatic redox system of glutathione [4], which includes reduced glutathione and enzymes that ensure its regeneration from the oxidized form of glutathione: glutathione peroxidase (GPO), glutathione reductase and glutathione transferase. Reduced glutathione availability, in turn, maintains the high activity of thiol-containing enzymes and has a stabilizing effect on the state of highly reactive SH-groups in erythrocyte membranes [4].

Oxidative stress also includes reactive molecules that can damage nucleic acids, which significantly affects the course of many diseases. Changes in genetic information, mutagenesis, and cellular apoptosis associated with this make oxidative damage of nucleic acids one of the most dangerous modifications among biomolecules [5]. It was previously shown that of the four bases, which make up the DNA structure, guanine is the most oxidized [6]. Among the most important biological OS markers there are the following purines: 8-hydroxy-2’-deoxyguanosine (8-OHdG) or its oxidized form 8-oxo-7,8-dihydro-2’-deoxyguanosine (8-oxodG). 8-OHdG is considered as the most sensitive and useful marker of oxidative DNA damage [7, 8], which can be found in many tissues and fluids as it easily penetrates from cells into the blood [6]. However, the biological role of 8-OHdG is currently poorly understood [6, 9].

Patients with any type of diabetes, both children and adults, are characterized by higher levels of oxidative DNA damage as assessed with 8-OHdG levels. Based on these observations, the 8-OHdG may play a role as a biomarker in the diagnosis of OS in diabetes [5, 7].

The aim of our study was to determine the prognostic value of 8-oxo-2’-deoxyguanosine plasma levels for the development of cardiovascular complications in patients with a combined course of HTN and T2DM.

Along with dietary recommendations, patients were administered with blood pressure-, glycemia- and cholesterol-lowering therapies, as recommended by international and national guidelines for the management of these patients [10–12]. Stable drug therapy was administered no shorter than 6 months prior to inclusion. Patients with symptomatic HTN, type 1 DM as well as other endocrine disorders and severe diseases of any sorts were excluded. The follow up was set at 12 months.

Oxidative stress assessment included activity of GPO and the level of sulfhydryl groups (SH-groups). The level of malondialdehyde (MDA) was used as a marker of the lipid peroxidation and oxidative system activity. The activity of GPO (EC 1.11.1.9) in Ethylenediaminetetraacetic acid (EDTA)-hemolysate was determined by the decrease of the reduced glutathione content within the 5-minute period of test hemolysate sample incubation in the presence of an oxidizing substrate, cumene hydroperoxide, by means of the photometric method [13]. The SH-groups and MDA were determined in the blood serum using the photometric method [13]. The following reagents were used: thiobarbituric acid (Organika, Germany), dithiobis nitrobenzoic acid (Merck, Germany), glutathione (Sigma-Aldrich, Japan), cumene hydroperoxide (Merck, Germany). The determination of 8-OH-dG in the blood serum was carried out by ELISA with kits “Bio-Vendor” (Czech Republic).

Normality of data distribution was tested with Shapiro-Wilk test. Quantitative variables are presented as Mean ± SE (SE-standard error), qualitative characteristics were described as the frequency of events (% of the observations normal number). T-test was used to check for differences between groups where appropriate. Linear regression analysis with correlation coefficient was performed to see the associations where appropriate. Receiver operating characteristic (ROC) analysis was used to determine the identifier of the cardiovascular events formation. P-value of less than 0.05 was considered valid for all calculations.

The study was performed in compliance with the basic provisions of the World Medical Association (WMA), Helsinki Declaration on ethical principles for medical research involving human subjects (1964–2000) and MHC of Ukraine Order N690 dated September 23, 2009. The study was approved by the Bioethics Commission of Kharkiv National Medical University (Ukraine) in accordance with the principles set forth in Helsinki Declaration. All the patients signed the inform consent.

By the end of the follow-up period, in 20 patients (12.8 ± 2.7%) with comorbid pathology, cardiovascular complications (CVC) developed including acute coronary syndromes (MI inclusive), ischemic stroke, transient ischemic attack (TIA), signs and symptoms of heart failure. Comparative analysis of OS parameters with relation to CVC showed significantly higher levels of 8-OHdG in patients who developed CVC (p = 0.046) (Tab. 2). At the same time, in this subgroup of individuals, there were signs of a significant decrease in the antioxidant system activity (significantly lower levels of GPO, p = 0.048) and significantly higher levels of OS indicator MDA (p = 0.048).

To find the optimal threshold value of 8-OHdG or the cut-off-value of this parameter as a predictor of CVC in patients with HTN and T2DM a ROC analysis was performed. AUC equaled 0.834 ± 0.042, which suggested a very good quality of an identifier for the CVC development (Fig. 1). 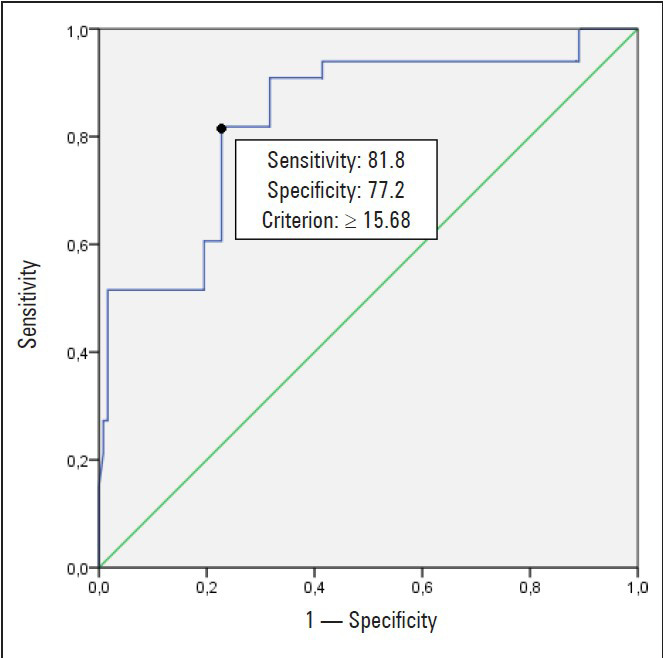 Analysis of metabolic parameters and BP levels depending on the level of 8-OHdG, proposed as a predictor of CVC in specified comorbidity, showed significantly higher levels of TC (p = 0.034), LDL-C (p = 0.035), systolic blood pressure (SBP, p = 0.022), and HOMA-IR index (p = 0.046) in patients with 8-OHdG levels of more than 15.68 ng/L (Tab. 3). The presence of significantly higher values of these recognized cardiovascular risk factors (CVR) in patients with plasma 8-OHdG above the threshold confirmed the assumption that the plasma level of 8-OHdG can be used as a marker of CVC in this category of patients.

Despite the data on the beneficial effects of contemporary blood pressure-lowering [10] and hypoglycemic [11] therapies, our study did not confirm these phenomena in real-world cohorts. Clustering of HTN and T2DM may partly explain lack of such phenomenon. As previously shown, an increase in blood glucose between 5.5 and 7.0 mmol/L may be accompanied by an increase in free radicals, which in turn may translate into TOD development [7].

Over the course of the last 2 decades, there have been studies suggesting the negative effect of statins on oxidant-antioxidant balance, especially studies in diabetes. The so-called statin-induced oxidative stress, associated primarily with toxic effects on liver enzymes [14–16] and with a negative effect on the redox-balance of b-cells [17], cannot be excluded also in our cohort.

Numerous studies have shown that 8-OHdG is not only a biomarker of OS, a possible risk factor for cancer, coronary heart disease, diabetes and atherosclerosis, but can also be a predictor of the course and prognosis of some diseases [18]. Our data coincide with the data of Erkan Yıldırım et al. (2017) who found higher levels of 8-OHdG in patients with HTN, including white coat hypertension, emphasizing the role of this molecule in oxidative damage [19]. The presence of significantly higher levels of 8-OHdG in patients with HTN solely as well as HTN + T2DM vs. the control group are also in line with the results of the meta-analysis of 14 trials involving 810 CVD patients which demonstrated higher levels of 8-OHdG in this category of patients compared to healthy individuals [20].

Elevated levels of 8-OHdG in patients with diabetes have been described in a number of studies; a correlation between the level of oxidative DNA damage and the severity of diabetic nephropathy/retinopathy was reported [21]. It is known that high levels of oxidized purines caused by hyperglycemia reflect DNA damage [22]. As opposed to previous reports [21] on normalization of the elevated levels of 8-OHdG in diabetes with glycemia-lowering drugs, our study showed more than twofold increase in 8-OHdG levels in patients with HTN and T2DM compared with the control group (p < 0.001) and significantly higher than in the nondiabetic patients with HTN solely (p = 0.002), despite the ongoing therapy.

In our previous study, we have shown that mutually aggravating effect of endothelial dysfunction, dyslipidemia, hyperglycemia and insulin resistance on the clinical course of HTN and T2DM may exist [23]. In this study, differences in TC, LDL-C, HOMA-IR and SBP were observed with relation to 8-OHdG plasma levels. Plasma levels of TC and SBP are included in most of the scales used to assess CV risk (SCORE, Framingham scale) [24, 25]. The presence of a coherent relationship between 8-OHdG levels and SBP as well as 8-OHdG levels and TC supports the concept of utilizing this marker in the prediction of clinical course of HTN and T2DM.

Our study suggests that 8-OHdG plasma levels not only depict current oxidative stress status, but it may contribute to more precise CV risk assessment of patients with comorbid hypertension and diabetes.

The authors declare the absence of conflict of interests.