1II Department of Cardiology of the Świętokrzyskie Cardiology Center in Kielce

A 74-year-old male was admitted to the Department of Cardiology, due to atrioventricular arrhythmia (second degree atrioventricular block 2: 1) with MAS syndrome. During hospital admission the patient was secured by a temporary transvenosus pacing electrode. The next day the DDDR pacemaker was implanted. After surgery, on ECG recording right bundle branch block (RBBB) configuration of paced complexes were present (Figure 1A).

The chests X-ray in posterior-anterior (PA) and lateral projections were correct (Figure 2). 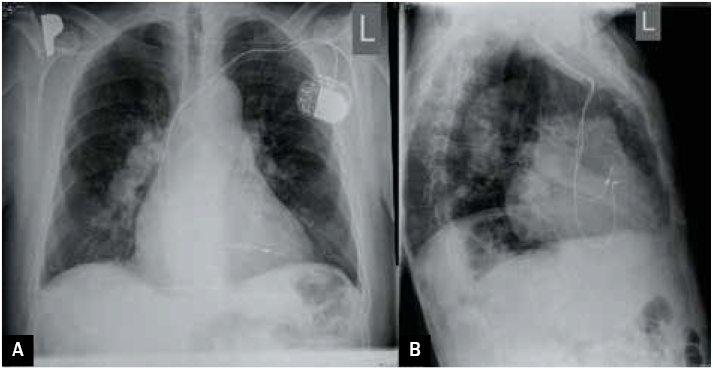 Figure 2A, B. Chest X-ray in posterior-anterior (PA) and lateral projections

To confirm a malposition of the electrode and to exclude possible artifacts, the transesophageal echocardiography was done. It also showed an incorrect position of ventricular electrode (Figure 4), current patent foramen ovale (PFO) and a trace of the left-to-right leak through the interatrial septum around the passage of the lead (Figure 5). 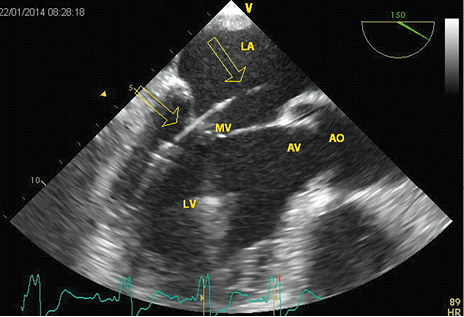 Figure 4. Transesophageal echocardiography. Pacing lead passing from the right to the left atrium (LA) and through the mitral valve (MV) into the left ventricle (LV); Ao — aorta; AV — aortic valve 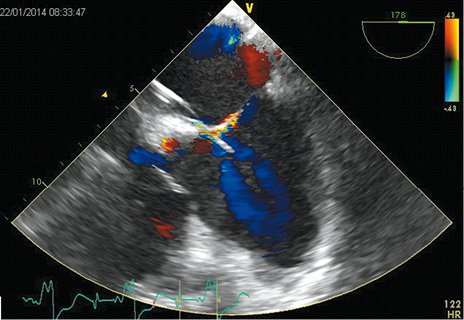 The next day of hospitalization repositioning ventricular electrode was done. After the procedure, the control ECG showed normal right ventricular stimulation with left bundle branch block (LBBB) (Figure 1B). The echocardiography showed the correct location of the pacemaker electrodes, there was no damage to the structures of the heart or leakage through the septum. Control stimulation parameters were correct.

The pacemaker implantation is the most common surgery in the invasive cardiology. Doctors are more often faced with problems of this treatment due to the fact that the population of pacemaker patients increases.

The article presents a very rare case of complication of the pacemaker implantation, which is the accidental placement of the pacing electrode in the left ventricle. The incidence of this complication is not known [1]. Most often this occurs during ventricular lead implantation in patients with PFO or interatrial or interventricular septum defect [2, 3]. The literature also describes isolated cases of the penetration interatrial, the interventricular septum or the right ventricular apex by the electrode displaced by the pericardial sac of the left ventricle. It is also described as a case of puncture of the subclavian artery and the introduction of the pacing electrode through the aortic valve into the left ventricle [3]. The abnormal ventricular lead position in the left ventricle of the heart is usually diagnosed late, most frequently during accidentally performed echocardiography. Therefore, the incidence of this complication is estimated by some authors to 2% of patients with an implanted pacemaker, which may be underestimated [1].

The delay in the diagnosis of abnormal location of the pacing electrode is influenced by several factors. During pacemaker implantation only electrocardiogram from limb leads are routinely assessed. Fluoroscopic image performed during surgery may be incorrectly evaluated as normal, especially when it is analyzed only by the PA projection [3]. Furthermore, the proper stimulation parameters measured intraoperatively are not differentiating because they are similar both in stimulating the right and left ventricle [2, 3]. Therefore, careful analysis and observation after pacemaker implantation are very important in order to identify the earliest possible complications.

The basic diagnostic tool to rank the correct position of the pacing electrode is a 12-lead ECG. Proper stimulation of the right ventricle gives a complete left bundle branch block (LBBB), usually with a sinistrogram. In contrast, stimulation of the left ventricle results in the right bundle branch block (RBBB), usually with the dextrogram. However, presence of RBBB in ECG during ventricular pacing not always proves wrong position of the electrode [4]. Right bundle branch block may occur in the case of placing the electrode in the coronary sinus or in the left ventricle of the heart or may occur as a result of septal or right ventricular free wall perforation. There are a few cases of atypical right bundle branch block (so-called the pseudo RBBB — in ECG in lead I, aVL is typical LBBB, and in V1–V3 is typical RBBB) in case of normal right ventricular apical pacing or apical segment of the septum in right ventricle, which can cause early left ventricular pacing. Moreover, if the ECG recording is technically wrong it can be mistakenly interpreted as a RBBB; the displacement of electrodes V1–V3 by one intercostal space below can normalize the ECG [4, 5]. The shape of the QRS with morphology RBBB during right ventricular pacing can be distinguished from the shape of the QRS with morphology RBBB during left ventricular pacing according to the criteria described by Okmen et al.: left axis deviation to the left in the frontal plane between –30 and –90 degrees, the transition zone in V3 lead (R-wave amplitude equal to the S-wave amplitude), the lack of S-wave in lead I and the sets of qR or RS in V1 lead. Nevertheless, each case of RBBB in ECG requires an accurate assessment of the electrode location [6].

Rapid diagnosis of pacemaker electrodes placed accidentally in the left ventricle is very important, because it may be a source of arterial embolism manifested by transient ischemic attack (TIA) or stroke. Thromboembolic complications occur in about 40% of patients with an electrode in the left ventricle of the heart who didn’t receive anticoagulation treatment [5, 7, 8]. In addition, there may be other complications such as perforation of the mitral valve, mitral regurgitation, endocarditis, or the loss of stimulation.

If the malposition of pacing lead is detected early after surgery it is possible to remove the electrodes usually by transvenous access. Transvenous lead extractions are effectively accomplished in many hospital centers by qualified doctors and with various techniques. Surgical lead extraction should be taken into consideration, especially if the cardiac surgery has to be performed because of other indications or in case of serious complications such as pericardial perforation [5, 7, 8]. If the leaving of pacing electrode in the left ventricle is necessary, anticoagulants (acenocoumarol or warfarin) must be given with therapeutic range of international normalization ratio (INR) between 2.5 and 3.0. Lower levels of anticoagulation or the antiplatelet treatment alone are ineffective [8].

The accidental introduction of pacing lead into the left ventricle is a potentially dangerous complication, which is rare, but can be overlooked during the routine pacemaker check. 12-lead ECG is recommended after each heart pacemaker implantation. It is the simplest test method used to assess the position of the pacing electrode. RBBB seen during ventricular pacing should arouse suspicion of improper position of the electrode in the left ventricle. Echocardiography is the most important study for evaluating location of pacing lead, while the chest X-ray has a little diagnostic value. The treatment of an inadvertent left ventricular pacing has two options: lead removal or chronic anticoagulation therapy.