Coronary artery disease (CAD) remains the leading cause of death in both developed and developing countries. One of the methods used to treat advanced CAD is coronary artery bypass grafting (CABG). This is the most common cardiac surgery and the number of people undergoing CABG is constantly increasing. The aim of this operation is to bypass the severely constricted coronary arteries in order to obtain cardiac revascularization, improve the quality of life and general condition of the patient and, above all, reduce the risk of death, especially due to cardiovascular diseases. Despite the tremendous progress in cardiac surgery and interventional cardiology, the risk of cardiovascular death continues to increase and the complication rate of cardiac surgery still remains high. This is undoubtedly related to a change in the profile of patients undergoing CABG — they are often elderly, with many concomitant diseases. The aim of this paper is to characterize patients undergoing isolated CABG [1–3].

Retrospective analysis included medical records of patients operated in the Cardiac Surgery Department of Świętokrzyskie Center of Cardiology from 2009 to 2011. The inclusion criterion for the study was an isolated CABG surgery. Excluded from the study were patients:

Statistical analysis was performed on clinical and echocardiographic data. The arithmetic mean, standard deviation, median, maximum and minimum values were determined for the individual parameters. The following models of statistical analysis were used in the study: χ2 test to establish whether a single nominal variable was significantly different from the expected value and to determine whether there was a relationship between two categorical variables; Student’s t-test for comparison of normally distributed data and Mann-Whitney test for comparison of non-normally distributed data between groups. The statistical significance of differences was determined by the p value; p values less than 0.05 were considered statistically significant. Univariate and multivariate logistic regression analyses were used to determine the predictive value of selected features. 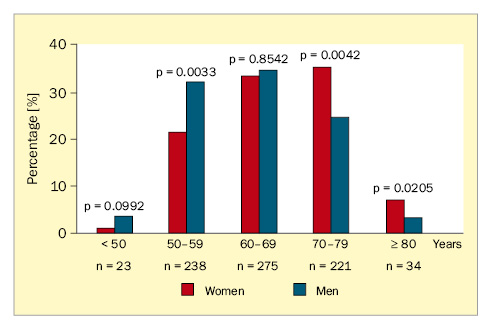 Figure 1. Age distribution according to gender

The disease that most commonly coexisted with coronary artery disease in patients undergoing isolated CABG was hypertension. It was diagnosed in 607 out of 791 patients, i.e. 76.7% of all patients (Table 1). 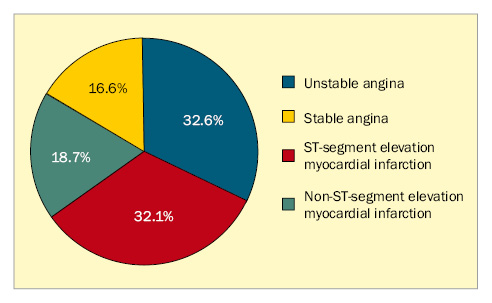 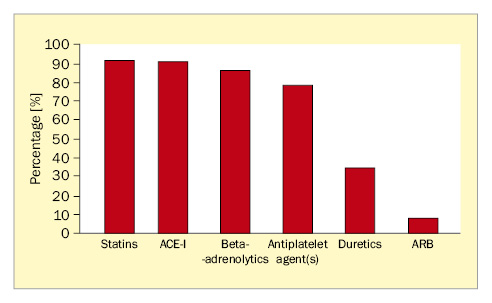 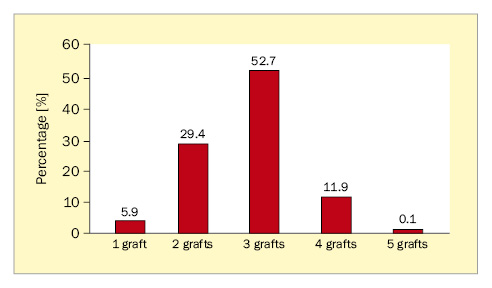 The mean age of a group of 791 patients was 65 years. Patients in the present study were older than those in the studies by Zamana et al. [4], El-Chami et al. [5] and Hashemzadeh et al. [6], in which the mean age was between 57 and 63 years. Also, patients in the studies performed by Polish authors — Sobczyk et al. [7], Pastuszek et al. [8], Banach et al [9] and Dąbrowski et al. [10] — were younger than in the present study (mean age was 59–62 years). In our study, 32% of the patients were over 70 years of age and 4% of the patients were over 80 years of age. The percentage of men was 74%. According to epidemiological data, ischemic heart disease is more likely to cause death in women than in men, but multivessel coronary artery disease is more common in men [11].

Antiplatelet drug(s) were used by 78.9% (n = 624) patients participating in our study. Their beneficial effects in patients undergoing CABG include reduced mortality, lower risk of myocardial infarction and stroke. Reduced incidence of cardiovascular disease is also associated with the use of beta-adrenolytics. In our study, 86.3% of patients were prescribed beta-adrenolytics. In other studies, 89% of patients [97] and 97% of patients [10] were treated with beta-adrenolytics before the CABG. Large number of patients taking angiotensin-converting enzyme inhibitors (ACE-I) in our study (91% of patients) were probably associated with a high incidence of hypertension in patients assigned to surgery and were significantly higher than that reported by other authors: Dąbrowski et al. — 64% [10]; Pastuszek et al. — 48% [8]. Meta-analysis of randomized trials on statin use prior to CABG showed that statins significantly reduced postoperative risk of myocardial infarction. In our study, statins were administered to over 90% of patients.

The mean number of implanted bypass grafts in the examined group was 2.7 ± 0.5 and was comparable to the results of the study by Banach et al. [9] — 2.58 ± 1.64. Both in our study and in the study by Pastuszek et al. [8], the most frequently bypassed artery was the left anterior descending coronary artery (in 99.5% and 96% of patients, respectively).