2Chair and Department of Cardiology, Medical University of Lublin, Poland

Prinzmetal angina (PA) is a rare form of the coronary vessel spasm ischemic heart disease [1]. It results in a local spasm of the big epicardial coronary artery [2]. The exact cause of the spasm has not been established yet, however, it is most likely related to the dysfunction of the endothelium, hypersensitivity of the vascular smooth muscle, increased tension of the autonomic system or oxidative stress [3]. Spasms might pass to both healthy arteries and arteries with atherosclerotic lesions [4, 5]. The type of angina described by Prinzmetal in 1959, with the help of an outstanding Polish expert Jan Kwoczyński, might pass with a varied clinical picture in the case of the same patient. It is prevalent in patients who are from 50 to 60 years old. Smoking is the major risk factor in the case of the epicardial vessel spasm [6–9]. AP appears most often when the body is resting and has no casual link with situations where the heart muscle has an increased need for oxygen.

A 60-year-old patient was transferred to an endocrinology clinic from an emergency department due to high hyperglycemia, about 390 mg/dL. The patient had been treated for diabetes type 2 for 4 years, he is obese, does not follow the diabetic diet and has been addicted to smoking for 30 years. He is a professional driver. His medical history shows that in 2002 he underwent an ischaemic brain stem stroke. At present, he shows a partial hemiparesis of the left side. The patient has been complaining about joint pains for 2 weeks, especially spine joints and he also reported temporary sensation of pins and needles in his hand as well as bone and joint aches in that area. In a primary care facility he had been treated with non-steroidal anti-inflammatory drugs. Moreover, he was treated for hypertension and hypercholesterolemia. He was given the following drugs: aspirin 75 mg, carvedilol 25 mg, rampiril 10 mg, metformin 2 × 500 mg, methylprednisolone 16 mg, rosuvastatin 10 mg, paracetamol 325 mg + tramadol 37,5 mg. Physical examination results – regular heart action at about 75/min, loud heart sounds, blood pressure at about 130/80 mm Hg. Laboratory test showed concentration of uric acid 7.40 mg/dL, CRP 146 mg/L, WBC 11 thousand/mm3. Three times during the stay in the endocrinology clinic, the patient reported his fingers turning pale, then violet and then turning red which lasted for few minutes (according to the doctors conducting the 2nd stage following the Taylor-Pelmear scale). In the initial phase, hands become pale and blood does not run through finger vessels due to the hand spasm. Then, small blood vessels expand and fill with blood which is devoid of oxygen and because of that the color of hands turns violet. Finally, the color of hands becomes red because of the increasing blood flow in vessels, after the spasm subsides [10]. After all three stages, the patient experienced pain in the chest of typical nature and extending to the left upper limb, which would stop after few minutes and always occurred at night. Because of coronary symptoms with an unclear cause, the patient was transferred to an intensive care unit. During his stay, early in the morning, he experienced severe pains in his chest, typical for ischemia and preceded by the Raynaud’s syndrome attack. The ECG taken when he was experiencing the pain is showed in Figure 1. The patient had coronary angiography which showed a spasm in the proximal part of the anterior interventricular branch of the left coronary artery (Fig. 2), which subsided after an intracoronary nitroglycerin dose was administered; it also showed mural lesions in other vessels (Fig. 3). The collected troponin was negative (< 0.006 ng/mL). The ECG (Fig. 4) taken 20 minutes after the pains subsided showed normalization of the ST segment in leads from the anterior wall, where the left anterior descending artery is responsible for the blood flow. Due to the above reasons, conservative treatment was recommended as a course of action. Transthoracic echocardiography showed a 60% ejection fraction of the left ventricle, mitral valve insufficiency of the 2nd level and 3rd tricuspid level. A calcium channel blocker was incorporated into the treatment (diltiazem 2 × 120 mg). Administration of beta blockers was stopped because they were intensifying PA symptoms. The same was applied to aspirin as it could intensify symptoms and inhibit prostacyclin production, a natural vasodilator. Coronary ailments did not return after the drug therapy. No new Raynaud’s syndrome attacks were observed. Since there was a possibility of PA complications due to cardiac and conduction arrhythmia or a sudden cardiac death, the Holter monitor test was conducted. It registered only 10 additional instances of activation of supraventricular nature. The patient was transferred to his primary clinic in a stable condition to continue the treatment of metabolic disorders. 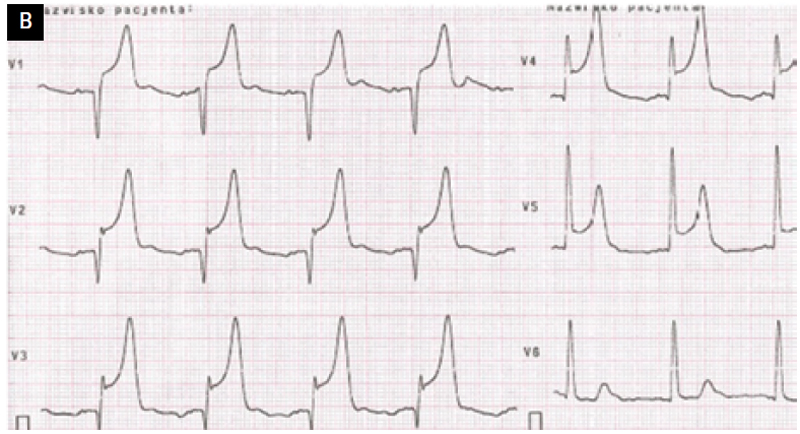 Figure 1A, B. ECG conducted while the patient was experiencing pain. Sinus rhythm 65/min. ST-segment elevation in lead V1–V5 with a contrasting depression in leads II, III, aVF 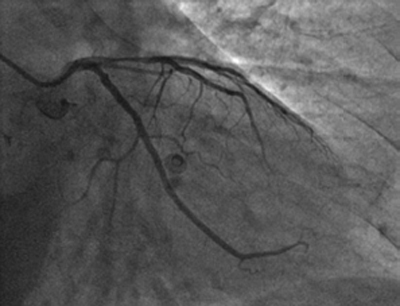 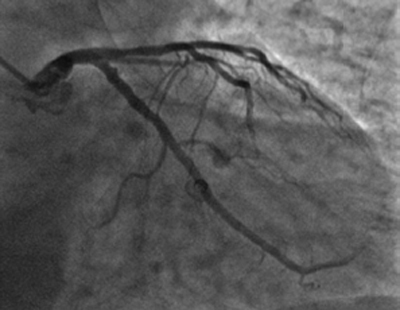 Figure 3. Diastole of the LAD initial segment after intracoronary nitroglycerin dose was administered Prinzmetal angina occurs in Poland in less than 1% of the patients with signs of angina. Its frequency rate is from 3% to 5% of the general population and the average age of patients is 47.2 [11, 12]. In the Nakamura test [13], the prevalence of migraine and RS among Japanese patients with PA was assessed. Three groups were created. The first one included patients with PA, the second one included the ones with exercise-induced angina and the third group included patients without an ischemic heart disease. Each group had 100 patients and there were no significant differences between them with respect to age and sex. The migraine frequency rate in Japanese patients with PA was 23%, while in the group with exercise-induced angina and in the control group it was 4% and 11%, respectively [14, 15]. The prevalence of RS in the first group was 9%, in the second group it was 3% and in the third group it was 4%, which shows that the differences were not considerable. The Miller & Associates Test [16] carried out on patients in the Northern America, showed that the prevalence of migraine was 26% in 62 patients with PA and that was a considerably bigger number than in the case of the coronary group (6%) and the control group with no coronary disease (10%). In the test, the prevalence of RS was as much as 24% in patients with PA, while it was 5% in the coronary group and 3% in the non-coronary control group. In Korea, Koh and associates [17] proved that the prevalence of migraine (40%) and RS (10%) in 20 patients with PA did not significantly differ from the one in patients with coronary disease and patients without it. The frequency of migraines in those patients was compliant with the tests carried out by Miller, unlike RS. The number of patients with PA was lower in comparison with the Miller’s test. The differences in results of Japanese and American researchers, and especially those concerning the number of RS cases in patients with PA, may be the result of racial and climate differences as the tests were carried out in Kanazawa and Toyama in Japan and Montreal in Northern America where it is colder. Low temperature was the predisposing factor for both PA and RS. The fact that exposure to cold caused RS is probably related with the additional increase in biosynthesis of thromboxane A2, which is a factor narrowing blood vessels [18, 19]. There are many other theories which try to explain the pathophysiological mechanism of PA. One of them stated that the symptoms of the disease may result from disorders of oxide of nitrogen production which physiologically causes the increase of the cyclic guanosine monophosphate through guanylyl cyclase activation and thus causes vasodilation effects. It is also suppressive with respect to endothelin and angiotensins II production, which have vasoconstrictive effect. Acetylcholine is the next chemical substance which may play its part in the patomechanism of vasospasm. In the case of vessels with no damage to endothelium, it widens them through the oxide of nitrogen, but when there is damage, it has a vasoconstrictive effect. Also, an excessive activity of phospholipase C plays its part in pathophysiology of PA, which may cause smooth muscle spasm by shifting calcium ions from the extracellular space [1, 20–23].

The case of the patient described as the last one shows standard risk factors of coronary disease. Moreover, the patient was addicted to smoking cigarettes, which plays an important role in PA etiology. In the above mentioned Nakamura test [13], as many as 44% of PA patients smoked cigarettes. The confirmation of the diagnosis in the instance described is the ECG recording done when the patient was experiencing pain in the chest, as well as the spasm of the epicardial coronary artery present in coronary catheterization which decreased after intracoronary application of nitroglycerine and also the lack of increasing markers of the heart muscle necrosis. Temporary elevation of the ST segment in the ECG recording occurred in the leads correspondent to vessels experiencing spasms. The nature and time of symptoms were characteristic for PA and suggested that angina ailments are not connected with the disproportion between the heart muscle’s demand for oxygen and its supply. This hypothesis is confirmed by the fact that PA symptoms increased after administering beta blockers. It was replaced with blockers of the calcium channel in a big dosage and this brought positive clinical effects. The factor conducive to RS, except for factors common with PA, was the profession of a driver and the microinjuries connected therewith which occurred during a constant contact of the driver’s hands with the wheels of his vehicles.

The case described is a very rare situation where episodes of Prinzmetal angina are preceded by Raynaud’s disease attacks. The course of PA, favorably for the patient, was not complicated by a heart attack or a dangerous arrhythmia. Clinical symptoms related with RS attacks were a signal for the patient that angina ailments could occur. As they did not recur, the case shows high efficiency of pharmacological treatment, the same in the case of both diseases.