2The Faculty of Medicine and Health Science, Jan Kochanowski University in Kielce, Poland

Atrial fibrillation (AF) is the most frequent chronic arrhythmia, affecting 1–1.5% of global population [1]. In the United States, about 2.3 million people suffer from AF, while the number of patient with AF in Poland is about 400,000 [2, 3]. It is estimated that, due to population ageing, resulting in more frequent occurrence of the diseases promoting AF development, the number of patients with arrhythmias will at least double by the year 2050 [4]. The increase in AF prevalence in recent years has been confirmed by the data from Spanish registry, showing 27% increase in AF prevalence during 10 years: from 4.8% in 1999 to 6.14% in 2009 [5]. The prevalence of AF increases with age; it is 0.1% in subjects younger than 50 years, whereas in patients above 85 years it rises to 17.8% [6]. The evaluation of clinical profile of patients with AF is very important because it determines the choice of antithrombotic and anti-arrhythmic therapy. The presence of concomitant diseases, as well as the age and sex of patients with AF, influence the risk of stroke. Among those diagnosed with AF, there are very few patients without comorbidities that are risk factors for thromboembolic events. According to data from REALISE-AF registry of 10,523 patients with AF, only in 5% patients no concomitant diseases were present [7].

The aim of the study was to analyse demographic data and assess the prevalence of concomitant diseases and the risk of thromboembolic and bleeding complications in hospitalized patients with AF.

Our study is a multicentre, retrospective registry. The analysis included data of 4,099 patients discharged from reference cardiology centre who were hospitalized in the years 2004–2012. Consecutive patients hospitalized for AF were included in the study. Included in the analysis were medical records with complete data allowing for the assessment of thromboembolic and bleeding complication risks according to currently used scales, as well as the data on recommended antithrombotic prophylaxis. For patients who were hospitalized more than once, only data concerning the last hospitalization were analysed. Exclusion criteria were valvular AF and in-hospital death.

The study included patients hospitalized in the years 2004–2012 when mainly CHADS2 scale was used and therefore this scale was utilised for thromboembolic risk assessment. CHADS2 score of 0 points means low thromboembolic risk, 1 point — moderate risk, and 2 points or more — high risk of stroke. Also CHA2DS2VASc score was used in the study. The risk of stroke assessed with this scale corresponds to CHADS2 score.

When assessing the risk of bleeding complication according to HAS-BLED score, following conditions were considered as promoting bleeding episodes: anaemia, defined as haemoglobin level below 13 g/dL in women and below 12 g/dL in men, and thrombocytopoenia below 150 G/L. Labile international normalized ratio (INR) was defined as time in therapeutic range (TTR) below 60%. Impaired kidney function was defined as creatinine levels ≥ 220 µmol/L or chronic dialysotherapy or previous kidney transplantation. Impaired liver function was defined as chronic liver disease or biochemically significant liver injury (bilirubin level > than 2 × upper limit of normal [ULN] or aminotransferase activity higher than 3 × ULN).

The study was approved by regional Bioethics Committee (No 12/21011). 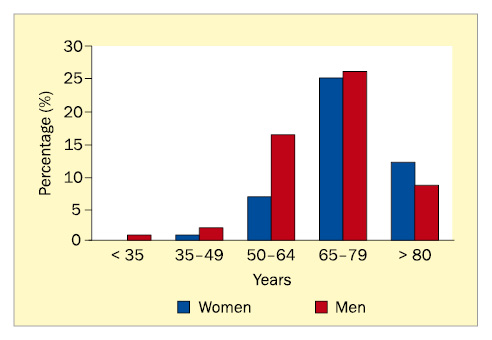 Figure 1. Age of patients with atrial fibrillation according to gender

Patients with AF were hospitalized mainly to perform elective procedures: cardiac stimulation system implantation/reimplantation — 1,422 patients (34.7%), coronary angiography or coronary angioplasty — 250 patients (6.1%) or electrophysiology study and/or ablation — 57 patients (1.4%). Aggravation of the underlying disease was the reason for hospitalization in 845 patients (20.6%) with AF. Most of them (580 patients; 68.4% of patients hospitalized for underlying disease) presented with decompensation of heart failure caused by other condition than AF with rapid ventricular rate. AF with rapid heart rate was a reason for hospitalization in 127 patients (15%), ischaemic heart disease aggravation — in 102 patients (12.1%), and hypertensive crisis — in 36 patients (4.5%). Angina pectoris was diagnosed in 142 patients, myocardial infarction without ST segment elevation — in 213 patients, and myocardial infarction with ST segment elevation — in 232 patients, that is in 24.2%, 36.3% and 39.5% patients with acute coronary syndrome, respectively. 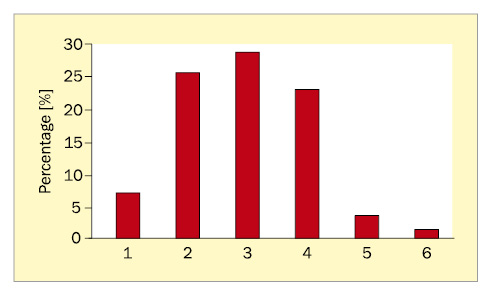 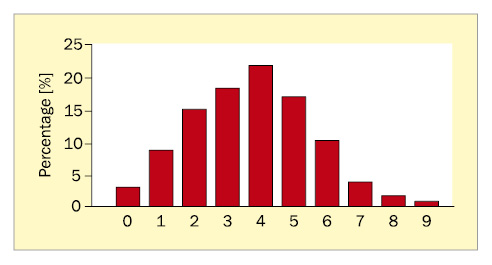 The risks of bleeding complications were compared between the groups of patients with low, moderate and high thromboembolic risk. High bleeding risk (HAS-BLED ≥ 3 pts) was found in 5 patients (1.7%) with no risk factors for stroke, 143 patients (13.7%) with moderate risk of stroke and 1,256 patients (45.5%) with high risk of stroke (Fig. 4). 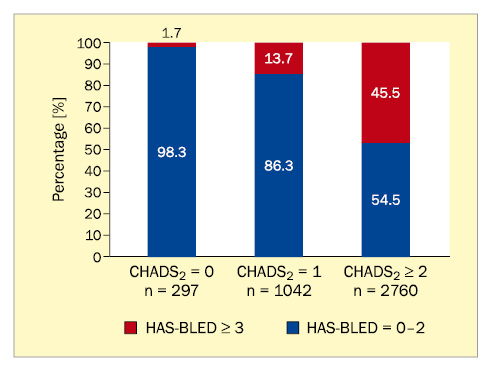 Figure 4. Risk of bleeding complications in patients with low, moderate and high risk of stroke

The mean age of the patients included in our study (n = 4,099) was 71 years. In this group, 42% of patients were older than 75 years, and every fifth patient was older than 80 years. Women were most prevalent in the study population (55%). The mean age of the patient in our study was similar to that of patients in the first cohort of European GARFIELD Registry — 70 years [8]. The proportion of GARFIELD Registry patients older than 75 years is 39%. Patients included in our study were younger than those included in the ATRIUM Registry (mean age 72 years) [9] and other patients hospitalized in District Hospital in Grodzisk Mazowiecki, Poland, (mean age 74 years) [10]. On the other hand, our patients were younger than patients included in Euro Heart Survey on Atrial Fibrillation Registry (mean age 68 years) [11], AFNET registry (mean age 68 years) [12] and REALISE-AF trial [7]. This may be caused by the fact that these registries included both inpatients and outpatients, while in our paper only hospitalized patients were analysed. Women were 55% of patients with AF hospitalized in Kielce Centre, whereas in cited registries women were in minority [9, 11, 12]. Only in the study of Bednarski et al., including 613 patients treated in district hospital, most of the patients were female (51%) [10], like in our study. Almost in all European countries there is a preponderance of women in general population. Higher percentage of women in two mentioned Polish studies may be probably attributed to older age of its participants compared with those included in GARFIELD, EHS, AFNET and REALISE-AF registries, and to the fact that AF prevalence is higher in elderly women than in elderly men, which is related to longer life-span of women.

In our study, the underlying ischaemic heart disease was found more frequently in patients with AF compared with other registries: 57% vs 19 % (GARFIELD), 28% (AFNET), 32% (Euro Heart Survey on Atrial Fibrillation) and 35% (ATRIUM). This might result from 24-hour access to haemodynamics laboratory and hospitalization of patients with acute coronary syndromes who were also referred from other centres in the region. In these patients ischaemic heart disease often led to heart failure.

In our study, only small percent of patients had isolated AF, which was consistent with the results obtained by other authors. The vast majority of patients with arrhythmia had comorbid conditions that contributed to significant thromboembolic risk in these patients.

In our registry of hospitalized patients with AF, the most prevalent group were elderly patients with many concomitant diseases that can be considered as a cause of arrhythmia, but also influence thromboembolic risk in these patients and determine the need for antithrombotic therapy. 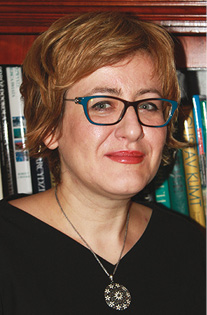