Submit an article Author Guidelines Ahead Of Print Reviewers 2020
Comparison of the Miller and Macintosh laryngoscopes in simulated pediatric trauma patient: a pilot study

COMPARISON OF THE MILLER AND MACINTOSH LARYNGOSCOPES IN SIMULATED PEDIATRIC TRAUMA PATIENT: A PILOT STUDY

INTRODUCTION: Airway management in pediatric trauma patients is challenging. Direct laryngoscopy is the gold standard for endotracheal intubation in emergency and trauma patients. The aim of the present study was to evaluate the performance of Miller (MIL) and Macintosh (MAC) laryngoscopes when employed in emergency pediatric intubation scenarios.

METHODS: This was a prospective, randomized, crossover, single-center study on novice physicians recruited on a voluntary basis. Each participant performer endotracheal intubation using Miller or Macintosh laryngoscopes during two airway scenarios: Scenario A — normal airway; Scenario B — difficult airway, defined as scenario in which the patient was placed on backboard with neck immobilization performer using rigid cervical collar. The order of use of one or other of the devices was randomized with a ratio of 1:1. The primary endpoint was the first attempt success rate.

Securing a clear airway in children compared with adults can be a challenge for medical staff due to the anatomical differences present, including a shorter neck, a relatively larger head or larger and more cranially located epiglottis [1, 2]. During a laryngoscopy, the larynx, both in young children and infants, often seems to be located more anteriorly [3]. In this situation it may be helpful to keep the head tilted and to shift the tongue to the left out of the line of sight. However, such maneuvers within the cervical spine are accepted only in non-traumatic patients. In the case of trauma patients (both adults and children), the immobilization of the cervical spine in order to reduce the possibility of injury is essential [4–6]. This limitation could result in the worsening of glottis visibility and less effective endotracheal intubation [5, 6]. During endotracheal intubation in children, most health professionals commencing endotracheal intubation in a direct laryngoscopy use a straight Miller laryngoscope blade. However, as indicated in the scientific literature, in children above 2 years of age the curved Macintosh blade may also be used [7–9]. However, regardless to the chosen method of the endotracheal intubation in pediatric patients, it should be noted that intubation should be done by the most experienced team member as more than three or four unsuccessful intubation attempts may result in bleeding and edema and eventually lead to the phenomenon in which each subsequent intubation attempt increases the bleeding and swelling, leading to a situation defined by the Difficult Airway Society as “cannot intubate, cannot ventilate”.

The aim of this study was to compare the efficacy of endotracheal intubation using Macintosh and Miller laryngoscopes in simulated cervical trauma pediatric patient conditions.

Approval from the Institutional Review Board of the Polish Society for Disaster Medicine (Approval no. 21/04/2016.IRB) and verbal informed consent from each participant were obtained before the study. Physicians included in the study were recruited on a voluntary basis. Inclusion criteria were that they had to be graduate physicians completing a postgraduate internship course in Emergency Medicine. This prospective, randomized, cross-over manikin study was performed in July 2016. Brief standardized prior training was given to each physician. The study devices consisted of the Miller laryngoscope (MIL) with a size 2 blade and the Macintosh laryngoscope (MAC) also with a size 2 blade (Fig. 1). We used a 5.0 cuffed endotracheal tube (ETT) for each intubation attempt. We also use a 6 French outer diameter malleable Slick stylet (Teleflex Medical, Research Triangle Park, NC, USA). 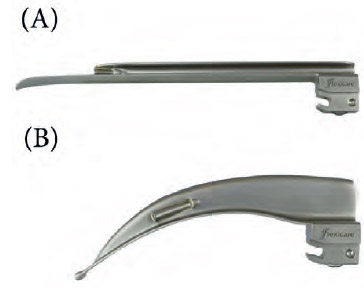 FIGURE 1. Laryngoscope blades used in the study: (A) Miller blade; (B) Macintosh blade

The participants performed endotracheal intubations with each device in two scenarios:

— Scenario B: difficult airway scenario. To simulate a trauma patient, manikin was placed on the board, and a hard cervical collar was applied to the manikin with its head fixed in a neutral position (Fig. 2). 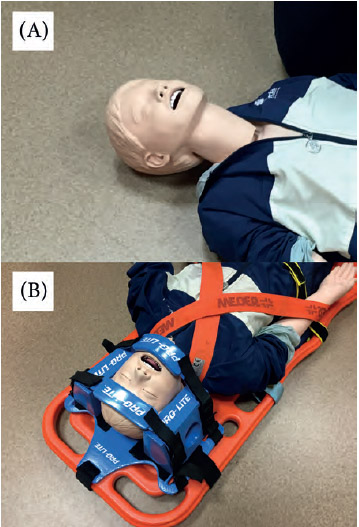 To simulate the scenario of a multi-trauma patient, a standardized airway manikin with a regular airway was used (MegaCode Kelly™; Laerdal, Stavanger, Norway). 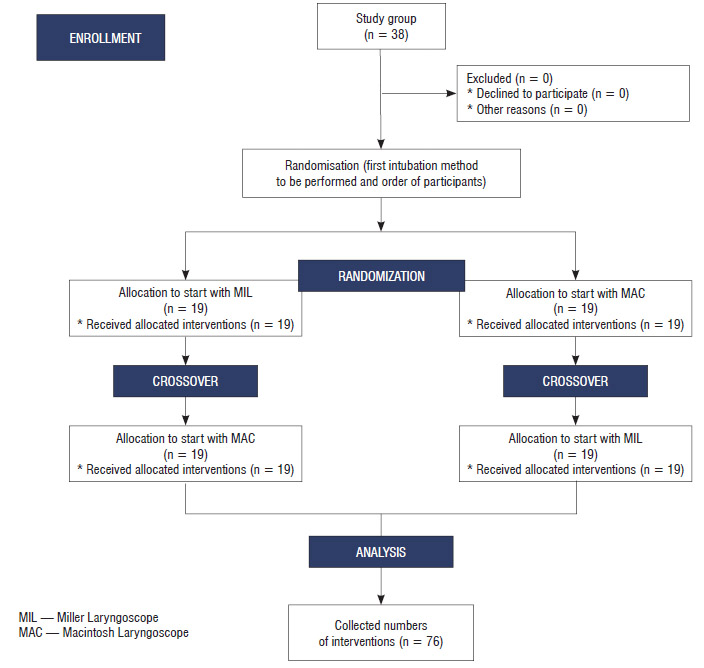 The primary endpoint was time to intubation (TTI), defined as the time in seconds from insertion of the device between the teeth to first ventilation. Successful intubation was verified when the lungs were inflatable by an Ambu bag. Failed intubation was defined as when the trachea was not intubated in the first attempt or the intubation attempt required more than 60 s [10, 11]. After each scenario, the participants were asked to grade glottis visualization using the Cormack-Lehane laryngoscopic grading scale (Grade 1 to Grade 4) [12], and to mark the ease of intubation on a 10-point visual analog scale (VAS; 1 — very difficult; 10 — very easy).

All procedures were recorded using a GoPro HERO 5 camera (GoPro GmbH, Munich, Germany), and all of the time variables were precisely analyzed by reviewing the recorded data. Statistical calculations were performer using the Statistica 12.5EN statistical software (StatSoft, Tulsa, OK, USA). Values of p < 0.05 were considered significant. Categorical variables were presented as frequencies, and continuous and ordinal variables as medians with an interquartile range (IQR). We compared qualitative variables by using Fisher’s exact test and the Kruskal-Willis test, and the quantitative variables by using Student’s test. All statistical tests were two-sided.

The study involved 38 novice physicians participating in a compulsory course in emergency medicine. All participants declared their ability to perform endotracheal intubation using direct laryngoscopy for both adults and pediatric patients. The median age of participants was 25 [IQR; 24.5–26] years.

During the endotracheal intubation in normal airways (Scenario A), the effectiveness of the first endotracheal intubation attempt using MIL and MAC was varied and amounted to 76.3% vs. 78.9%, respectively (Tab. 1). The median duration time of intubation using MIL was 24.5 s [IQR; 21–32.5] and was slightly shorter compared to the MAC 23 s [IQR; 20.5–31] (Fig. 4). Visualization of the glottis, as well as the ease of intubation were comparable between these two devices. 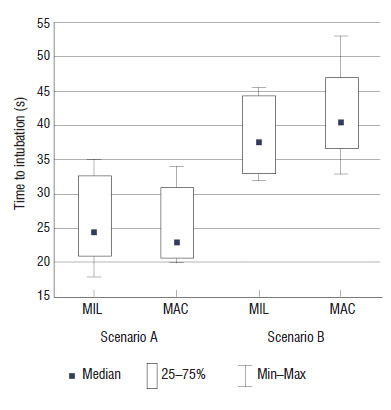 In difficult airways scenario where the manikin was placed on the spinal board and a rigid cervical collar used, the effectiveness of the first intubation attempt for MAC was 36.8%, and for MIL — 44.7%. The difference in the effectiveness of the first attempted intubation was statistically significant (p = 0.023). The median duration of intubation during the Scenario B with the MAC laryngoscope was 40.5 s [IQR; 36.5–47], and with MIL 37.5 s [IQR; 33–44.5] (p = 0.011). The endotracheal intubation using MIL was associated with better visualizing of the glottis compared to the Macintosh laryngoscope (Tab. 2). A similar relationship was observed when the scale of ease of the implementation of the procedure was analyzed (VAS).

The study demonstrated that cervical spine immobilization during simulated endotracheal intubation using a laryngoscope with the Miller blade was associated with higher efficiency than intubation with the Macintosh laryngoscope.

Our study has several limitations. First we used a standard manikin with a standard anatomical design, which might not adequately simulate emergency clinic conditions. However, only the use of manikin allows one to perform randomized crossover trials on the participants with limited experience in the field of clinical endotracheal intubation. Simulated conditions allow one to perform a study without prejudice to the health of potential patients.Secondly, the participants knew the scenario before evaluation. Thirdly, the severity of dental trauma was not considered.

The main strengths of our study are the number of novice physicians included in this trial and the randomized, crossover design of this study.

Acknowledgement: We are grateful to all study participants.