Arterial hypertension (AH) and obesity are among the most common non-communicable diseases. Given the negative contribution of obesity-associated metabolic disorders to the formation of cardiovascular complications, adequate blood pressure (BP) control is very important in patients with hypertension and obesity comorbidity [1–3]. At the same time, the presence of resistant hypertension (RH) is a serious problem due to the increased risk of adverse cardiovascular events in this category of patients [4, 5].

According to the 2018 European Society of Cardiology/European Society of Hypertension (ESC/ESH) Guidelines for the management of arterial hypertension, resistance can be talked about if the target BP levels are not achieved when three antihypertensive drugs are used in full (or maximum tolerated) doses, which is confirmed not only by office data, but also by out-of-office BP measurement [1]. The American consensus has expanded this definition of resistance by adding a formulation to control BP when using four or more antihypertensive drugs [5].

It should be noted that in addition to true resistance in some patients receiving antihypertensive therapy, there is pseudo-resistance due to a number of reasons, an important place among which is poor compliance with the prescribed therapy [1, 5, 6]. Although there is no gold standard for assessing patient adherence to therapy, it has been shown that compliance is inversely proportional to the frequency of antihypertensive drug use [6]. That is why the use of fixed combinations of antihypertensive drugs is important in increasing compliance to therapy, preventing the development of pseudo-resistance and masked uncontrolled hypertension [1, 3, 5].

Despite the large-scale studies evaluating resistant hypertension, only a few studies have studied pseudo-resistance, in particular, with suboptimal drug dosages (medical inertia), poor compliance and white-coat hypertension [5–7]. In addition to these reasons, the formation of pseudo-resistance in obesity can be facilitated by lifestyle features such as insufficient physical activity, unhealthy diet and excessive salt intake [7–9].

This study is a continuation of our previous work on the establishment of the characteristics of hemodynamic and metabolic parameters in RH in obese patients [10]. In this study, the sample of patients has been expanded and not only patients whose pseudo-resistance is due to poor compliance with the therapy and non-compliance with the doctor’s instructions to increase physical activity (but also for other reasons) are included. In addition, it was presented with the results of ambulatory blood pressure monitoring (ABPM) and home BP measurements (HBPM), which are necessary to confirm the concept of “resistant hypertension”, according to the current guidelines [1, 5, 11].

The aim was to establish the frequency of occurrence of different variants of RH in obesity and to conduct a comparative assessment between pseudo-resistant (due to different causes) and true resistant AH.

The study included 302 patients with uncontrolled AH and obesity (middle-aged patients 45–59 years old) (Fig. 1). In accordance with the current European and international guidelines [1, 12], treatment of all patients began with the implementation of dual antihypertensive therapy (fixed combination of ACE inhibitor and CCB). Initial treatment efficacy was assessed 3 months after dual therapy was administered. Patients who achieved the target BP level on dual therapy (169 people) continued to receive dual therapy, and those patients in whom dual therapy did not sufficiently reduce BP to target levels (153 people) were switched to triple therapy (fixed combination of ACE inhibitor, CCB and the thiazide-like diuretic indapamide). Among patients who received triple therapy, 69 people failed to achieve a decrease in BP to < 140 and 90 mm Hg. In accordance with the current guidelines [1, 5], these patients were regarded as patients with resistant hypertension (true or pseudo) and, in addition to triple therapy, they received the fourth antihypertensive drug, spironolactone. Patients with sufficient physical activity who did not have target BP levels with triple antihypertensive therapy (and the inadequate control of BP was confirmed by ABPM or HBPM) were patients with true RH. Those patients who had poor adherence to prescribed medicines, and/or failure to follow the doctor’s instructions to increase physical activity, and/or failure to follow the doctor’s instructions for reducing calorie intake, and/or white-coat phenomenon, and/or high sodium intake, and/or obstructive sleep apnoea, and/or chronic kidney disease (CKD) were assigned to the group of patients with pseudo-resistance [1, 7, 13]. 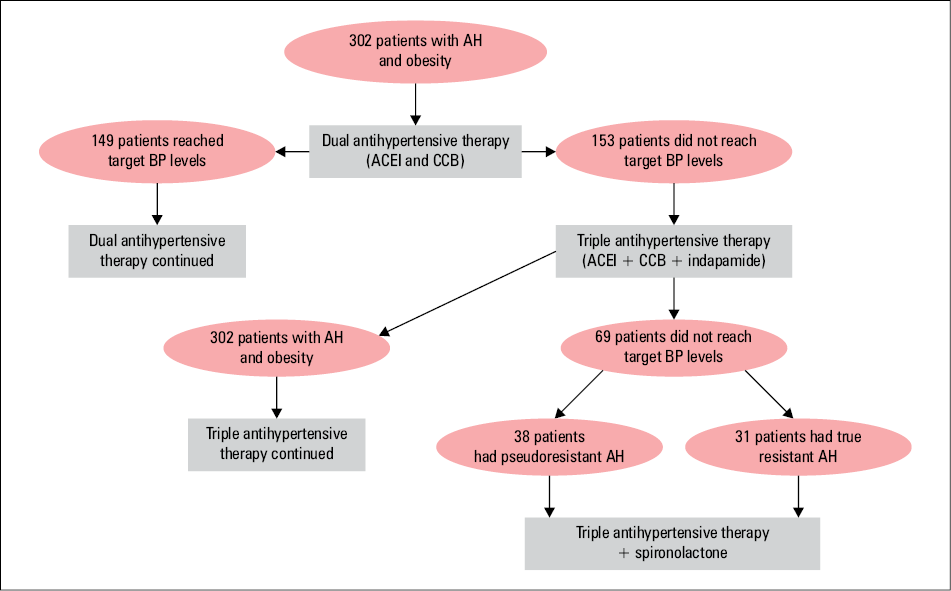 Regardless of the therapy option, all patients were additionally examined 6 months after the initiation of antihypertensive therapy.

All patients were given recommendations for lifestyle modification: increasing physical activity (assessed using a pedometer with indication the number of steps taken during the day), limiting food intake and reducing salt intake. Adherence to treatment was evaluated on the basis of the patient’s diary, which included the time of taking a fixed combination of the antihypertensive drug and BP levels in the morning and evening hours.

ABPM was performed three times during the observation period: at the stage of enrolling patients into the study, 3 months after the start of therapy, and 6 months after the initiation of antihypertensive therapy.

Other research methods are described in detail in our previous work [10].

The statistical processing of the obtained data was carried out using the package of statistical software “SPSS 17” (IBM), Microsoft Office Exel-2003. The data are presented as M ± s. The difference was statistically significant at p < 0.05.

It is known that in assessing the effectiveness of antihypertensive therapy, it is important to control both office and out-of-office BP [1, 14]. The data obtained during ABPM allow assessing the circadian rhythm, violations of which are associated with an increased risk of cardiovascular events [15–18]. At the same time, the regulation of the circadian rhythm is a complex and not fully understood process that stimulates the participation of the central nervous system, the sympathetic activity of the autonomic nervous system, cardiac, vascular and renal regulation, molecular genetic mechanisms [16, 18]. It can be assumed that in this study, more pronounced disturbances of the circadian rhythm in RH are associated with a higher renin-angiotensin-aldosterone system (RAAS) activity even at the stage of inclusion of patients into the study, which is more pronounced with a difference in BP levels during the prescribed therapy.

According to the literature data, poor adherence to therapy is the most common cause of RH [7, 13]. In this study, it was shown that failure to comply with the doctor’s recommendations for lifestyle modification (as well as a combination of various factors associated with resistance) plays an equally important role as poor adherence to therapy. This may also be due to the fact that the study initially included only patients with comorbidity of hypertension and obesity, and in the management of obese patients it is the lifestyle change (which helps to reduce metabolic disorders) that plays an important role, including in the BP control.

In our previous article describing the initial phase of the study, we have already explained the reasons for the lower BMI and higher aldosterone levels in the presence of true resistance [10]. At the same time, our new data regarding the difference in SBP levels in true and pseudo-resistance even when target BP levels are reached can be explained by the difference in aldosterone levels and its effect on the sympathetic tone of the autonomic nervous system, which in turn leads to poorer BP control as reflected by office and out-of-office BP [19–22]. At the same time, lower LDL-C levels with true resistance can be explained by better adherence to therapy, including the implementation of recommendations for lifestyle modification (in particular, increased physical activity and reduced caloric intake of food), which positively affected the level of atherogenic lipoproteins.

The difference in circadian rhythms of BP between patients with pseudo-resistant and true RH is consistent with the data of a number of authors [15–18] and can be explained by the fact that violations of the circadian rhythm (most often in the form of non-dipper) are associated with an increased cardiovascular risk, target organs damage and the formation of RH [19, 21]. Therefore, not only good control of office and out-of-office BP, but also of the circadian rhythm is important in assessing the effectiveness of antihypertensive therapy, and in patients with true resistance, even against the background of relatively satisfactory BP control, normal circadian rhythm is more difficult to achieve than in pseudo-resistant patients.

Despite the fact that in recent decades, interventional techniques (renal denervation, carotid baroreceptor stimulation, arteriovenous fistula, etc.) have begun to be used for the treatment of RH as an alternative to traditional medical treatment (intensification of antihypertensive therapy with the addition of spironolactone), perhaps in the future they will prove themselves as effective options for influencing RH (and those hemodynamic and metabolic disorders that are associated with it), but so far they do not belong to routine methods [7].Therefore, in the management of patients with RH and obesity, clinicians should first of all prescribe a quadruple antihypertensive therapy and control adherence to it, try to modify the patients’ lifestyle and take into account the comorbid pathology that is present in patients.

Despite the fact that, in comparison with our previous study, in this work we slightly extended the age of the patients (up to 59 years inclusive), nevertheless, our study was limited only to middle-aged patients. When enrolling patients in the study, we only included patients with a BMI in the range of 30–39.9 kg/m2. Perhaps, with more pronounced obesity, as well as with overweight, there are other features of resistance. Our study included 69 patients with resistant hypertension (both true and pseudo-resistant), so it can be assumed that with a larger sample, slightly different changes in hemodynamic, metabolic and anthropometric parameters in obese patients will be noted. It should also be noted that despite the inclusion of ABPM data in the study, which is the most sensitive method for assessing the effectiveness of antihypertensive therapy, the data obtained from patient’s diary regarding compliance with therapy and lifestyle modification are somewhat subjective.

Thus, in our work it was found that even when target BP levels in antihypertensive therapy (triple fixed combination + spironolactone) are achieved, obese patients with resistant hypertension are characterized by more pronounced disturbances of the circadian rhythm (most often in the form of non-dipper) and higher levels of office and out-of-office BP, compared with non-resistant patients. In the majority of obese patients, a combination of several factors plays a role in the development of pseudo-resistance, the most frequent of which is non-compliance with recommendations to increase physical activity and reduce the calorie intake, poor adherence to prescribed medicines. Compared with pseudo-resistant patients, the presence of true resistance in obesity is associated with higher SBP and aldosterone levels, as well as lower BMI and LDL-C.