Fasting during Ramadan means abstention from food, liquids, tobacco, medication (oral, inhaler or injection) and sexual activity from sunrise to sunset. The S’hour is the last meal of the night, taken before dawn. Food and fluids are consumed only at night.

During this month, repeated cycles of fasting, associated with alterations in the daily patterns of sleep, activities and medication timing might contribute to changes in blood pressure and heart rate among hypertensive patients.

Fasting can lead to worsening of cardiovascular disease, dehydration, hypoglycemia, hyperglycemia, and hypertensive peaks [1]. Each year, doctors have to decide with patients with high cardiovascular risk their ability to fast, as well as their therapeutic adaptations to be made, and the methods of the monitoring [2].

Studies on the effects of fasting on the blood pressure and heart rate of hypertensive patients are rare, and have provided inconclusive results.

It is therefore essential for any cardiologist to objectively assess the safety of fasting during this holy month, in order to improve the care of his/her patients and guarantee their physical and psychological well-being.

The aim of this study was to examine the effect of medication timing during Ramadan on blood pressure and heart rate in hypertensive patients taking their treatment once daily.

This was a descriptive cross-sectional, single-center study including 44 known, reliable and compliant hypertensive patients. After giving their informed consent, they were enrolled between April and June 2019 (one month before and during the month of Ramadan) and followed up at the cardiology department of Habib Thameur Hospital in Tunis.

Tunisia is a country in Northern Africa, bordering the Mediterranean Sea. Tunisia has a highly homogeneous population, almost entirely of Arab and Berber descent. The climate is Mediterranean in the north and along the coast, semi-arid in the interior and arid in the south.

We received the ethical approval from the Bioethics Committee of Habib Thameur hospital.

We performed an individual interview with each patient, during which a clinical examination was carried out [age, gender, body mass index (BMI), age at diagnosis of the hypertension, comorbidities, treatment, and lifestyle].

All the monitoring sessions started at approximately the same time in the morning at 10 am (within a 2-hour interval). The cuff was placed on the non-dominant arm and removed after 24 hours for the monitoring of the blood pressure and heart rate. Calibration was checked by comparing the auscultatory results with those by a mercury sphygmomanometer, which were verified to be in close agreement (5 mm Hg). Blood pressure was measured three times per hour between 7.00 am and 11.00 pm, and twice per hour between 11.00 pm and 7.00 am. Subjects were instructed to immobilize their arms during cuff inflation.

The data were then analyzed using the following software: ABPM V4.5.0, Copyright © 2015. A minimum of 70% usable BP recordings are required for a valid ABPM measurement session.

P-value < 0.05 was considered statistically significant for all tests.

Among our patients, 15 were diabetics, 20 had dyslipidemia, 7 had a coronaropathy, and 17 were active smokers.

During the month of Ramadan, the antihypertensive treatment schedule differs from one patient to another. Twenty-five patients took their treatment after dinner (group 1), and 19 during the S’hour (group 2).

All patient biological parameters are summarized in Table 1.

Regardless of age, we found a significantly higher value of average asleep systolic blood pressure in women in comparison with men before Ramadan.

We also compared the average values of blood pressure and heart rate according to age (older/younger than 60 years old), BMI (over than 25 kg/m² or less), duration of hypertension with a cutoff of 5 years, medical history such as the presence of diabetes, dyslipidemia, coronaropathy, smoking and diet. We found out that there are no significant differences between the groups in both periods.

The average values are summarized in Table 2.

Figure 1 is a representation of the 24-hour profile of blood pressure values during the last ten days of Ramadan in groups 1 and 2. 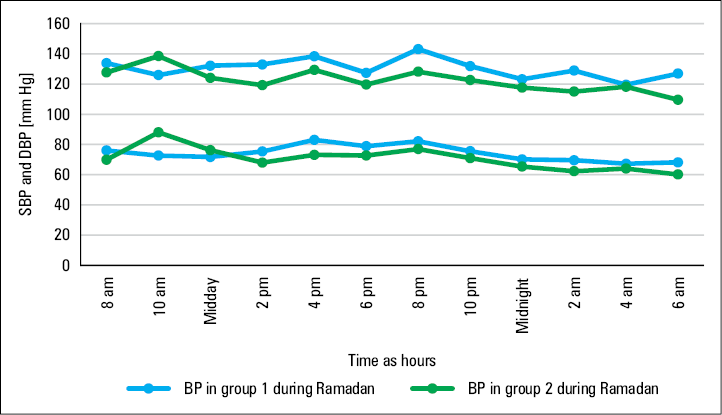 Characteristics of the study population

Our population was made up of 29 women and 15 men. Women were certainly more willing to perform multiple visits than men. Regardless of age, we found a significantly higher value of average asleep systolic blood pressure in women in comparison with men in period A. In contrast to our results, several studies have shown that there is a significant difference between men and women where men have a higher prevalence of hypertension and higher values of blood pressure from 20 to 65 years then the difference between the two genders is narrowed [3].

However, as far as we know, there are no large-scale studies that have yielded results powerful enough to change recommendations about hypertension according to gender [4].

Several studies showed that a normal BMI was associated with a lower prevalence of cardiovascular diseases [5]. The link between obesity and hypertension is complex. A high BMI is one the principal risk factors for hypertension [6, 7] and as a result the prevalence of hypertension increases with a rising BMI [8, 9].

In our study, 15 patients were diabetics, 10 under treatment and 5 on a diet. In a study carried out in Algeria, in Ain Taya, involving 1511 patients, Biad et al. found that the prevalence of diabetes in the population of hypertensive patients was 22.7% [10].

As we all know, type 2 diabetes and hypertension are often present as part of the metabolic syndrome [11].

Moreover, 20 patients were dyslipidemic, 15 on lipid-lowering therapy and 5 on a diet.

By analyzing three reports from the National Health and Nutrition Examination Surveys from 1988 to 2010, Egan et al. [12] showed that 60.7 to 64.3 % of hypertensive patients also had hypercholesterolemia.

If we consider the hypotensive treatment, among our patients, 20 were on monotherapy, 19 on dual therapy and 5 on a triple antihypertensive therapy.

Our results are in line with those of the French Mona Lisa study that has involved 4825 hypertensive patients of which 47% received monotherapy, 34% were on dual therapy and 19% on a triple therapy [13]10 year-age group (35–74 years).

Many functions of the organism, such as heart rate and blood pressure, are subject to fluctuations during the day [14].

In healthy subjects, we can see a nocturnal decrease in blood pressure (10 to 20 mm Hg) called dipping. In some patients, however, this daily rhythm is abolished, resulting in an insufficient decrease or even an increase in their blood pressure during the night [15].

The day/night cycle of blood pressure and heart rate may vary due to activities. It has been demonstrated that subjects with variable work shifts have a reversed circadian rhythm. This adaptation is rapid since it can be observed from the first day of change (from daytime to night-time break, for example) [16].

A number of published trials have reported that taking the treatment in the morning or at night, may interfere with the efficiency, the duration of action and the safety profile of the antihypertensive drugs [17].

Taking at least one hypotensive medication in the evening may improve the control of blood pressure and reduce the risk of significant cardiovascular morbidity and mortality [17].

Given the importance of chronotherapy in hypertension, and the significant changes in the circadian rhythm during the month of Ramadan, it is necessary to know the therapeutic adaptations to be made to avoid or to minimize cardiovascular morbidity and mortality.

During Ramadan, patients have to take their treatments between sunset and sunrise, trying to keep the same therapeutic pattern as before this month.

In our study, patients were divided into two groups: 25 took their treatment during dinner and 19 during the S’hour.

This is a further proof that chronotherapy, especially during the month of Ramadan, is an essential element that needs to be studied in greater depth in order to provide better management of hypertensive patients.

The weak points of our study were:

• the single-center nature of the study with a low population size;
• the limited repeatability of the ABPM;
• the lack of accurate data on patient dietary surveys: the nutritional value of food could not be objectively assessed as it was based on patients’ self-reporting;
• for technical reasons, we were unable to carry out systematic medical laboratory tests during the month of Ramadan to compare the results in both periods;
• we studied the impact of the month of Ramadan when it occurred during summer, the hot season, which did not allow us to generalize the results;
• no power analysis was performed prior the study. The number 44 was not determined before the start of the study. These are the patients who consented to come to the hospital for the ABPM 2 times.

In this study, there were no significant changes in systolic and diastolic blood pressures as well as heart rate during the 2 periods. However, during Ramadan, a slightly better result is observed when taking the treatment with the S’hour. In order to elaborate recommendations on the management of patients with cardiovascular risk during Ramadan, it would be necessary to conduct an international randomized single-center study.

This research did not receive any specific grant from funding agencies in the public, commercial, or not-for-profit sectors.