Funding source and disclosure: None

BACKGROUND: To assess the frequency of normal and abnormal myocardial perfusion imaging (MPI) in a consecutive cohort of patients from Pakistan over a period of 8.5 years.

MATERIAL AND METHODS: We assessed 9170 patients who had undergone stress-rest MPI between January 2004 and June 2013. Patients were assessed for change in demographics, risk factors, and frequency of abnormal and normal MPI.

CONCLUSIONS: We conclude that over the past 8.5 years, a marginal but significant decline in abnormal and a rise in normal MPIs trend have been observed. An exorbitant rise in use of vasodilator as a method of stress was also observed. We envisaged a follow-up study to ascertain lower negative predictive value of vasodilator as a possible reason and till than results of this and other such studies must be read cautiously.

Myocardial perfusion Imaging (MPI) using ECG-gated single photon emission computerized tomography (GSPECT) since its introduction in late 1980s has become the most commonly performed non-invasive functional cardiac imaging modality. This is attributed as it provides enormous information for risk assessment of patients with known or suspected coronary artery disease and aids in the assessment of myocardial viability [1]. According to 2010 statistic published by American Heart Association (AHA), there has been a progressive decline in cardiac deaths and myocardial infarction, yet the burden of disease remain high [2]. A recently published single center study from USA has documented a declining trend of abnormal GSPECT over a period of two decades [3]. However, despite the high death rates due to non-communicable diseases, by 2010 the leading cause of death in the developing countries including Pakistan would be cardiac deaths [4]. With this diversified pattern of cardiac mortalities, the purpose of this study was to assess the frequency of normal and abnormal MPIs in a consecutive cohort of patients from Pakistan over a period of 8.5 years.

This study included 10 563 consecutive patients who had GSPECT studies at Karachi Institute of Radiotherapy and Nuclear Medicine [KIRAN] (3905 patients from January 2004 till November 2009) and Karachi Institute of Heart Diseases [KIHD] (6658 patients from December 2009 till June 2013). We excluded 1393 patients with history of valvular disease and cardiomyopathies, while remaining 9170 patients constituted the studied cohort. The study was duly approved by ethical review committee of Institutes. As per departmental practice, pertinent information regarding demographics, presenting complaints, risk factors, and history of intervention were recorded. Dynamic exercise (Bruce or Modified Bruce Protocol) was used in 4469 patients (48.74%) and remaining 4701 (51.26%) patients had pharmacological stress using dipyridamole (with or without low level exercise). SPECT MPI was acquired using one day stress and rest or stress only without gating (3905 patients from January 2004 till November 2009) and with gating (6658 patients from December 2009 till June 2013) using 16 frames for post-stress studies under dual head gamma cameras (CardioMD, Philips, Netherland and Mediso, Hungry till November 2009 and only CardioMD, Philips, Netherland from December 2009 onward). Technetium-99m labelled Methoxy IsoBbutyl Isonitrile (Tc-99m MIBI) in dose of 10-15 mCi (370-555 MBq) for stress and 20-30 mCi (740-1110 MBq) for resting studies. Radiotracer was injected at least 1 minute before terminating the treadmill stress test and 3 minutes after dipyridamole infusion (0.142 mg/kg/min for 4 minute). We did not use attenuation correction in either study. Left ventricular function parameters like ejection fraction (LVEF in %), end-diastolic volume (EDV in ml) and end-systolic volume (ESV in ml) were measured using commercially available software (Autoquan®). All patients were asked to come with 3-4 hour fasting, stop beta and calcium blocker 24 hours prior, long acting nitrate and tea/coffee at least 12 hour prior the test. All scans were reported by two board certified nuclear cardiologists with > 05 years’ experience. 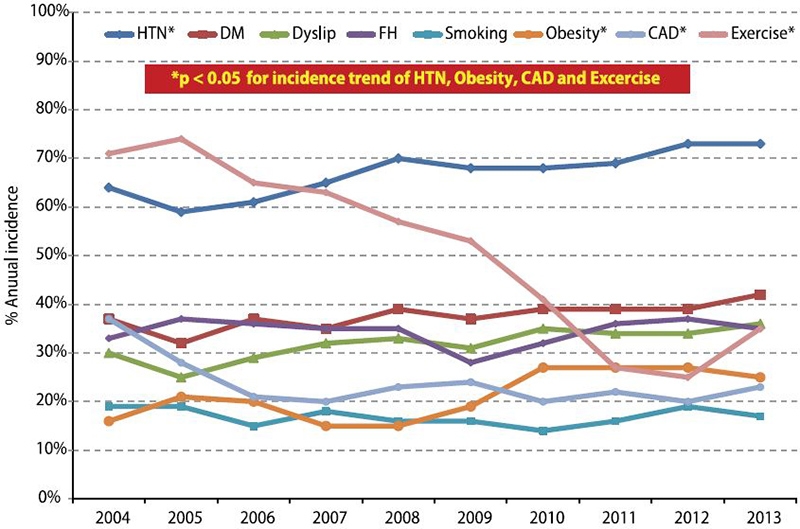 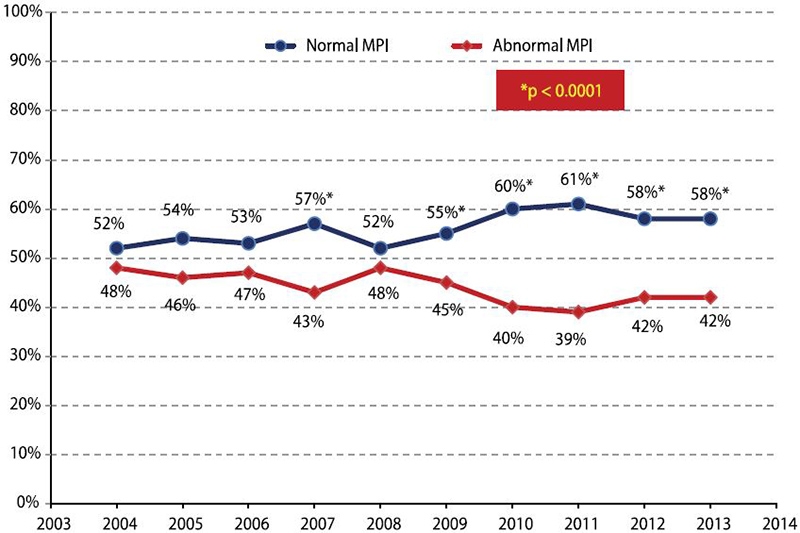 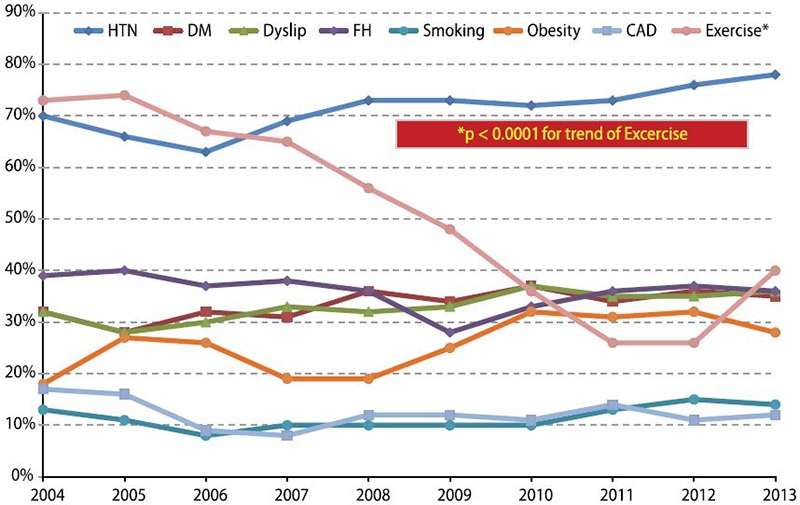 Figure 3. Demographical annual %incidence trend from 2004 to 2013 for normal MPI 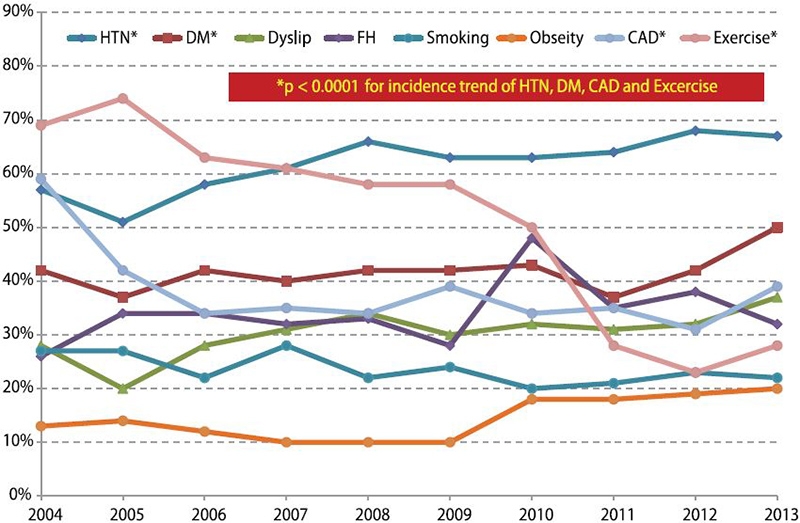 Figure 4. Demographical annual %incidence trend from 2004 to 2013 for abnormal MPI

In this study we have observed a mild but significant declining trend of abnormal MPIs in the second half of study period. There was a concomitant significant increase in mean BMI of all participants, which is considered to have a positive correlation with CAD and associated mortality [5]. However, there are published studies revealing low incidence of abnormal MPIs in obese patients [6] and plausible explanation for this protective role of higher BMI is reverse epidemiology and obesity paradox [7]. We have also observed an overall significant declining trend of exercise as a mode of stress, and a sedentary life style in studied population could be the prime reason for preference towards pharmacological (vasodilator) intervention over exercise as stress method. It is generally considered that MPI results obtained with vasodilators stress have shown good concordance with exercise stress [8, 9]. However, recent studies have shown lower negative predictive value (NPV) of a normal MPI done with vasodilator than with dynamic exercise [10, 11]. We cannot exclude possible contribution of higher false negative results to the rising trend of normal MPIs in our cohort, as coronary angiography was not justified in these cases. Our results are in concordance with a study published by Rozanski et al. [3], although their study exhibited a very steep declining trend of abnormal MPIs from 40.9% to 8.7% in 20 years. The primary reason could be the larger sample size and longer study duration in their study.

Comparing patients with normal and abnormal MPIs on yearly basis, older age, male gender predominance, lower BMI, diabetes and smoking were found to have significant correlation with abnormal than normal MPIs. Except lower BMI, the remaining are well established risk factors for CAD and favor contribution towards an abnormal MPI. Reverse epidemiology and obesity paradox as discussed above may be the possible reasons for an unusual association between lower BMI and abnormal MPIs, which needs to be explored appropriately.

Interestingly in patients’ cohort with a marginal rising trend of normal MPIs, only dynamic exercise did show an exaggerated declining trend while rest of known risk factors did not do exhibit any significant change in trend. The possible explanation could be the referral bias or possible higher false negative rate (lower NPV) of vasodilator stress MPI [12]. While marginal but significant declining trend of abnormal MPIs was found to be associated with significant rising trend of DM and HTN. This finding is in contradiction to previous studies where significant decline in abnormal MPIs was associated with reduction in risk factors [3]. One plausible explanation for this finding could be the referral bias and subjecting more patients with DM and HTN (mixed population with or without symptoms for ischemia) for MPIs studies. Regarding asymptomatic diabetics, various prospective studies have shown a lower (6-22%) prevalence of ischemia [13]. However, we have not segregated patients with or without ischemic symptoms and this is a limitation of the study. Another limitation of this study is lack of follow up of patients especially those with normal MPIs to find out NPV. The result of this study should be read carefully, as marginal but significant rise in normal MPI over a period 8.5 years has been associated with significantly higher trends of vasodilators stress which has lower NPV than exercise. We envisaged following these cases to ascertain the NPV of normal MPIs which will be shared in future.

We conclude that over the past 8.5 years, a marginal but significant decline in abnormal and a rise in normal MPIs trend have been observed. An exorbitant rise in use of vasodilator as method of stress has also been observed. We envisaged a follow-up study to ascertain lower NPV of vasodilator as a possible reason and till than results of this and other such studies must be read cautiously.