Myocardial perfusion imaging (MPI) is widely used in routine practice for diagnosis and risk stratification of coronary artery disease (CAD). Intense curvilinear activity in the stomach wall of a patient was seen on MPI raw data. This phenomenon was completely dissimilar to the familiar intraluminal gastric reflux of sestamibi. This observed activity could have resulted in false-positive or false-negative artifacts — and inaccurate diagnosis — of the inferior wall of the left ventricle after MPI processing. On further exploration, the current researchers found that the patient had a history of 10-year Omeprazole capsule consumption. The authors present this infrequent case of intense stomach uptake to stress the related clinical and diagnostic implications with the aim to stimulate acute awareness of possible, unexpected infringements on image quality that could potentially interfere with accurate interpretation of the data.

Myocardial perfusion imaging (MPI) with exercise or pharmacological stress, either with thallium-201 (201Tl) or technetium-99m (99mTc)-sestamibi, is widely used for preparation of diagnostic and prognostic information regarding patients with proved or possible coronary artery disease (CAD) and it facilitates the accurate ma­nagement of CAD patients [1]. However, with present myocardial radiotracers, such as 99mTc-sestamibi, rather high extra-cardiac activity is usually seen, which is mostly associated with physiologic hepatobiliary or renal excretion [2]. In contrast, there are limited reports suggesting possible non-physiologic reasons for these visceral uptakes, and occasionally, indicating different underlying pathologies [2]. Indeed, accidental pathological findings during myocardial perfusion imaging are not scarce and cautious examination of the full field of image acquisition has been useful in identifying these accidental findings [3–5]. Alternatively, most efforts concentrate on dissolving these interfering abdominal activities without attention to the clinical importance of such findings [6, 7].

On the MPI raw data of one such patient, intense curvili­near activity in the stomach wall was evident. This phenomenon was completely dissimilar to the familiar intraluminal gastric reflux of sestamibi. This observed activity could have resulted in false-positive or false-negative artifacts — and inaccurate diagnosis — of the inferior wall of the left ventricle after MPI processing. On further exploration, the current researchers found that the patient had a history of 10-year Omeprazole capsule consumption. The authors present this infrequent case of intense stomach uptake to stress the related clinical and diagnostic implications with the aim to stimulate acute awareness of possible, unexpected infringements on image quality that could potentially interfere with accurate interpretation of the data.

A 54-year-old woman with an atypical chest pain was referred to the nuclear medicine department for assessment of possible coronary artery disease. The patient filled out a questionnaire that included demographics and risk factors for CAD. She had not had previous coronary artery bypass surgery (CABG) or percutaneous coronary intervention (PCI). The patient underwent a 2-day dipyridamole technetium 99m-sestamibi SPECT protocol. All cardiovascular medications were stopped for at least 2 days and the patient fasted overnight prior the test. Dipyridamole (0.56 mg/kg) as a pharmacologic agent was infused over 4 min. Patient symptoms and a 12-lead ECG were monitored continuously. A dose of 740 MBq of Tc-99m sestamibi as a compact bolus was injected 4 min after the beginning of the infusion. After twenty minutes, the patient was requested to drink two glasses of fatty milk to hasten hepatobiliary clearance of the Tc-99m sestamibi, and acquisition was performed 90 minutes after the initial infusion of dipyridamole. The following day was the rest phase of the test.

During the processing of the raw data, the authors observed intense curvilinear activity in the stomach wall, which was identical in shape and intensity to stress and rest sets (Figure 1A, B). The intensity of the gastric wall activity was considerably higher than the patient’s heart activity. The authors asked about her past medical history regarding gastrointestinal problems, including hiatus hernia, peptic ulcer disease, indigestion, heart burn, an acid reflux problem, previous procedures (gastric surgery), and other medical records. The patient explained that she experienced epigastric discomfort and nausea about ten years ago; a gastroenterologist prescribed her Omeprazole capsules (20 mg) daily. Her symptoms subsided after taking this capsule; so, she had been taking it since that date by self-prescription. 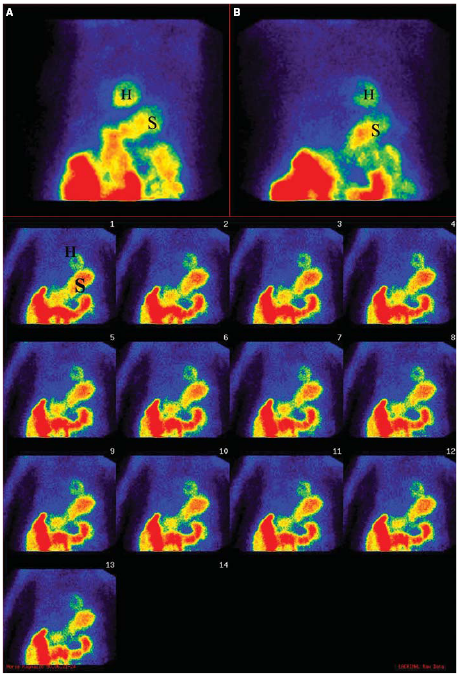 Figure 1. There is curvilinear activity with more intensity in the stomach wall than in the heart on both stress (A) and rest (B) raw data of myocardial perfusion imaging (MPI) using 99mTc-sestamibi SPECT. H, heart; S, stomach

Myocardial perfusion imaging with 99mTc-labeled agents is used wildly for the diagnosis and risk stratification of CAD [1]. In spite of all the benefits of 99mTc-MIBI myocardial perfusion imaging, the radiopharmaceutical has some extra-cardiac uptake, frequently in the stomach, liver, bowel, and spleen [8], which can interfere with accurate interpretation of the MPI [9]. Several techniques have been tried, with mixed results, to reduce the effect of extra-cardiac activity on the interpretation of the images, including delaying the imaging, ingesting water, milk, or food, altering the patient’s position, or using various prokinetic medications [9–11].

This case showed that stomach wall uptake was strongly associated with prolonged use of PPIs. The intense stomach wall 99mTc-sestamibi activity was not washed out by the ingestion of milk and was the same on both stress and rest sets.

In the literature, a number of studies have demonstrated the association of this activity with dyspepsia [12–14], but to the authors’ knowledge, only one investigation reported its association with consumption of PPIs [15]. In a Khary et al study on 39 patients who underwent dipyridamole 201 Tl stress tests, a stepwise logistic regression analysis revealed that only two variables had predictive value in 201 Tl gastric uptake: the presence of active gastritis symptoms and the use of anti-gastritis medications [12].

In another study by Côté et al, on a group of 819 patients who underwent 99m Tc-sestamibi cardiac, single photon emission, computed tomography (SPECT), 13 patients (1.6%) depicted significant gastric-wall hyperactivity. They concluded that this finding was associated with dyspepsia [13].

In a similar study by Gholamrezanezhad et al. on 1056 patients, 1.9% of participants were identified with gastric wall hyperacti­- vity [14]. In addition, this study classified gastric wall activity qualitatively as G1, or hyperactive gastric wall (equivalent to the patient’s heart activity), or G2 (less than heart activity), and showed that dyspeptic symptoms were present in 80% and 18.6% of G1 and G2 patients, respectively (p < 0.001) [14].

The mechanism of impact of the PPIs on stomach-wall sestamibi uptake is not obvious. 99mTc-sestamibi is a lipophilic cationic agent that is taken up by myocardial tissue in proportion to myocardial blood flow and concentrated in mitochondria [1]. However, as a preliminary cause, it may concentrate through gastric parietal cells due to their abundant mitochondria; therefore, inhibition of the H1/K1 ATPase pump diminishes the secretion of sestamibi from the gastric wall into the gastric lumen in the same way that the decline of acid secretion would [15].

This case and previous reports may indicate that stomach wall activity, due to its proximity to the inferior myocardial wall, could cause either false-negative or false-positive myocardial perfusion SPECT findings resulting from either Compton scatter or ramp filter artifacts. This suggests a need for more attention during the interpretation of MPI of patients, particularly those who are taking PPIs [15]. This paper recommends designing a clinical trial that compares gastric wall activity in patients who stop, and in patients who continue, the PPIs before scheduling myocardial perfusion scanning.

Additionally, although gastric wall hyperactivity on cardiac SPECT is infrequent, it may indicate a treatable cause of chest pain or contribute to distinguishing further diagnostic evaluation regarding peptic ulcer or other gastric disorders. Therefore, a systematic review of the raw data before reading the specific images and a report of the findings should be included in cardiac SPECT reports.

The presented case may demonstrate that gastric wall activity on 99m Tc-sestamibi cardiac SPECT images is associated with prolonged PPI use. The authors recommend taking a history of prolonged use of PPIs to predict the increased stomach wall 99m Tc-sestamibi activity, which can interfere with the accuracy of a study. As a guide for further diagnostic tests, there should be a systematic review of the raw data before reading the images and a report of the findings should be included in cardiac SPECT reports.