The prognostic value of RDW, NLR and PLR in sequential radio-chemotherapy for advanced lung cancer

Lung cancer is the most common cause of cancer-related death among men and the second most frequent among women with as many as 1.76 million deaths worldwide annually [1]. The disease is frequently diagnosed at an advanced stage, which is associated with a poor prognosis. Approximately 84% of lung cancers are non-small cell lung cancers (NSCLC) characterized by a 5-year overall survival rate of 24%, which is significantly higher than 6% for small cell lung cancer (SCLC) [2, 3].

Inflammation plays a significant role in cancer development and is regarded as the 7th hallmark of cancer [4]. Inflammatory cells release molecules to the tumor microenvironment, including growth factors that stimulate proliferation and survival factors that limit apoptosis. Furthermore, these molecules include proangiogenic factors and extracellular matrix-modifying enzymes, which facilitate angiogenesis, invasion, and metastasis [5].

Multiple studies indicate that blood morphology indices, such as red blood cell distribution width (RDW) [6–13], neutrophil-to-lymphocyte ratio (NLR) [14–19], and platelet-to-lymphocyte ratio (PLR) [6, 19–21], may be prognostic factors in cancer patients. Such indices could be particularly useful for clinicians given that the majority are based on routinely performed laboratory tests.

RDW indicates the variability of red blood cell volume, and it is commonly used to distinguish the etiology of anemia [22]. Higher RDW values reflect a larger variation of erythrocyte volume, which can be associated with chronic inflammation [23] and oxidative stress [24]. Likewise, neutrophil-to-lymphocyte ratio (NLR) and platelet-to-lymphocyte ratio (PLR) have been reported as inflammation biomarkers [19, 25]. In our study, we analyzed whether parameters such as RDW, NLR, and PLR could be useful in assessing prognosis in patients treated with definitive sequential radio-chemotherapy for stage IIIA–IIIB NSCLC.

This retrospective analysis was based on a group of 110 patients treated for NSCLC at a single institution between January 2009 and December 2017. The following inclusion criteria were used:

thinoperable stage IIIA or IIIB NSCLC (according to the 7 edition of AJCC/UICC TNM Classification of Malignant Tumors),
radical sequential radiotherapy and chemotherapy as the primary method of treatment.

Patients with a diagnosis of a secondary malignant neoplasm, ongoing autoimmune disease, or chronic steroid uptake were excluded from the study group.

The data were collected from patients’ medical history and the Polish National Cancer Registry. Out of the initial database of 176 patients, 64 cases had to be excluded due to missing data (36.8%). The final cohort included 110 patients. The RDW was available in 81 cases (73.6%), NLR and PLR in 110 cases (100%). The indices were calculated based on laboratory tests performed before the first dose of chemotherapy (median delay of 1 day, IQR 0–10).

The vast majority of patients (97; 88.2%) received chemotherapy based on cisplatin and vinorelbine. Remaining patients received gemcitabine and carboplatin (5; 4.5%), cisplatin and etoposide (5; 4.5%), carboplatin and vinorelbine (2; 1.8%), or pemetrexed and cisplatin (1; 0.9%). The median radiotherapy dose was 67.2 Gy (IQR 66.51–69.2). The majority of the patients received radiotherapy doses ranging between 60 and 70 Gy (93.6%). The remaining patients had their total dose reduced due to treatment complications. Patients’ characteristics are presented in table I.

The receiver operating characteristic (ROC), Kaplan-Meier estimator, log-rank testing, and Cox proportional hazards regression model were used for the analysis. Median OS was chosen as a cut-off point for the ROC analysis. The univariate Cox analysis was performed using known clinical factors. Statistically significant cofactors (p-value < 0.05) were included in the multivariable analysis (MVA, tab. II). Due to the inclusion of corresponding variables, the MVA was performed twice, using RDW, NLR, and PLR as continuous and binary indices. The Spearman Rank Correlation test was used to assess the correlation between the RDW or primary gross tumor value (GTVp) and hemoglobin concentration (HGB). The statistical analysis was performed using the STATISTICA 13.3 by TIBCO Software Inc. 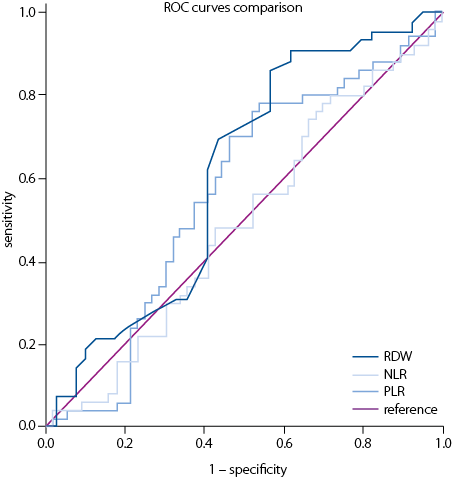 Figure 1. ROC analysis based on RDW, PLR, and NLR for OS in patients treated with sequential radio-chemotherapy for advanced inoperable NSCLC 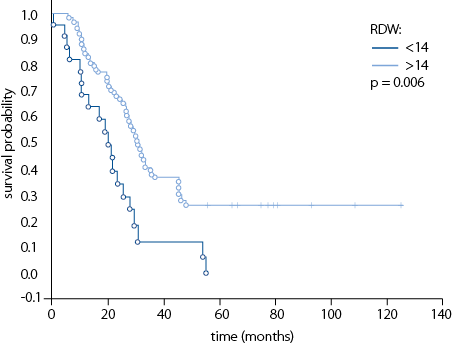 Inflammation plays an important role in tumor development, including angiogenesis, tumor invasion, and metastasis. Many molecules released by the inflammatory cells to the tumor environment promote cancer development [5, 26]. Elevated expression of various inflammatory biomarkers, including interleukin-10 (IL-10) and transforming growth factor (TGF-β), were found to be associated with poor survival in patients with NSCLC [27, 29].

The correlation between C-reactive protein, erythrocyte sedimentation rate (ESR), and RDW was reported by Lippi et al. in 2009 [23]. In another study, by Allen et al. reported a correlation of RDW and different inflammatory biomarkers; it was suggested that RDW may reflect pathologic processes, such as inflammatory stress and impaired iron metabolism [30]. Since RDW can be considered a marker of chronic inflammation, its elevated value may be associated with poor survival in patients.

In this study, overall survival (OS) was significantly lower in patients with higher RDW as well as higher PLR and NLR, when the latter two were expressed as binary values. Furthermore, as shown in table I, patients with RDW > 14% had lower HGB and RBC than those with RDW ≤ 14%, higher median GTVp, and more frequently stage IIIB disease. Additionally, there was a statistically significant correlation between HGB and RDW (p = 0.002). However, the HGB was not significantly associated with survival (tab. II), while RDW was found to be an independent prognostic factor.

Many authors reported that elevated RDW values are associated with an advanced cancer stage in NSCLC [7, 31, 32]. In our study, we have shown that RDW can also provide additional prognostic insights in patients presenting advanced disease (IIIA–IIIB). Chen et al. found that among 245 NSCLC patients, RDW ≥ 13.25 was significantly correlated with cancer stage III–IV [31]. In a study conducted by Song et al. RDW > 12.95 was strongly associated with the IIIB and IV stage of NSCLC [32]. Koma et al. conducted a study to assess the association between RDW levels and prognosis in 332 patients with NSCLC (stages I–IV) [7]. In the last study, the authors divided patients into two groups: the early (stage I–II) and advanced cancer stage (stage III–IV). In the early stage group, higher RDW levels (>15%) were associated with prognosis, but such association was not found in the advanced stage group [7]. The RDW was also found as potentially helpful in screening, as RDW varies significantly between healthy adults and NSCLC patients [31, 32].

In this analysis, in contrast to other studies, we analyzed RDW both as a continuous and binary variable. The conversion of continuous variables into binary variables can lead to overfitting and lack of reproducibility of results, especially considering the relatively low AUC values for each investigated index (0.606, 0.564, and 0.509 respectively). While setting a cut-off value can produce statistically significant results, those values vary in different studies. Koma et al. established a cut-off value of 15% [7]. Toyokawa et al. used 14.5% as a cut-off value, which they described as “the upper limit of the hospital laboratory normal range” [33]. Ichinose et al. used a cut-off value of 13.8 [34]. Some authors used quartiles or tertiles to divide patients into groups, such as Kiriu et al. [35] or Warwick et al. [36]. In our study, we have shown that RDW remains a significant prognostic factor even as a continuous variable, and although defining a single cut-off value remains controversial, higher RDW values are universally associated with poorer prognosis in NSCLC patients.

The strength of our study lies in the analysis of RDW influence on prognosis in patients limited to stage III NSCLC, decreasing the influence of cancer stage on prognosis, and the use of RDW as both a continuous and binary index in COX regression analysis, which is less prone to overfitting. We acknowledge the study limitations, including the small group size, retrospective design, and limited clinical data available. Additionally, concurrent radio-chemotherapy and immunotherapy with durvalumab are currently considered to be the standard of care for advanced NSCLC patients, superseding sequential radio-chemotherapy. However, due to the recent introduction of durvalumab to clinical practice [37–39], there is limited follow-up data available. Moreover, sequential radio-chemotherapy remains in use for patients with contraindications for concurrent therapy [39, 40].

The introduction of RDW to the initial patient assessment might improve the prognostic accuracy, as RDW was determined to be an independent prognostic factor for the OS in non-operative stage IIIA and IIIB NSCLC, albeit with limited specificity and sensitivity. Both NLR and PLR were not found to be statistically significant prognostic factors in our analysis.

Department of Biophysics, Faculty of Medical Sciences in Zabrze