Percutaneous ablation is the recommended treatment for patients whose symptoms are related to the presence of an accessory pathway (AP). For asymptomatic patients, the electrophysiological study (EPS) is one of the methods to stratify the risk of sudden cardiac death (class IIa, level of evidence B). An effective refractory period of the AP during isoprenaline stimulation lower than or equal to 250 ms, the finding of multiple pathways, and inducible tachycardia dependent on the presence of the AP indicate the need for ablation [1]. However, this clinical situation and scientific evidence are related to a fully innervated heart, both sympathetically and parasympathetically.

We report the case of a 63-year-old female after orthotopic heart transplantation (OHT) by bicaval anastomosis in June 2020. The reason for referring the patient to our department was intermittent preexcitation syndrome, which occurred in the second year of the follow-up after OHT and was not associated with clinical symptoms. In the report from the Polish transplant coordination center (“Poltransplant”), the death of the donor was due to irreversible central nervous system damage as a result of a gunshot. There were no data on heart rhythm disturbances, including life-threatening arrhythmias in the donor. On the patient’s admission, the resting electrocardiogram (ECG) showed the right bundle branch block (RBBB) (Figure 1A) with intermittent preexcitation (Figure 1B). 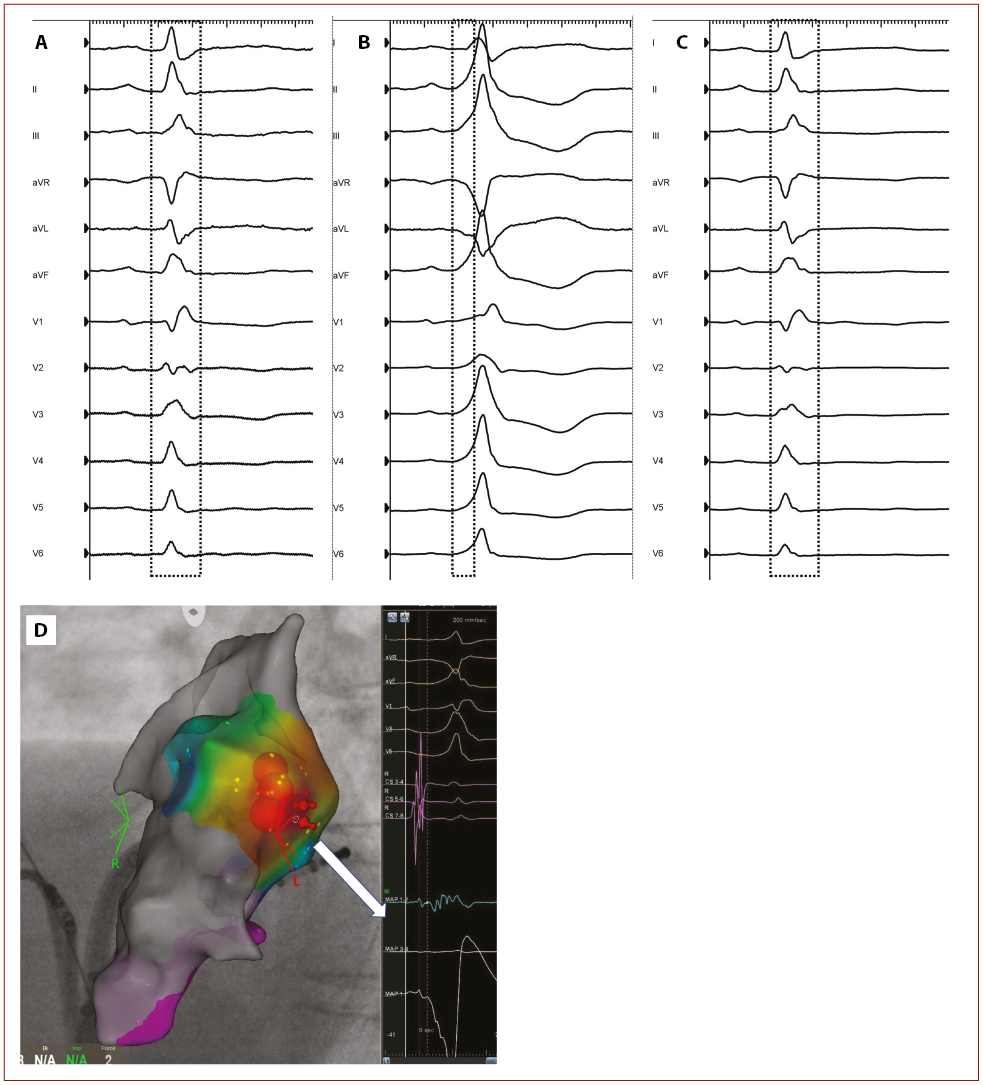 No signs of acute cellular rejection (“0” according to the International Society for Heart and Lung Transplantation [ISHLT] scale) were found on in-hospital histological examination of myocardial biopsy material. After obtaining written informed consent, EPS was performed. During pacing maneuvers, antegrade conduction involved an AP and increased to 380 ms under isoprenaline infusion. On the other hand, retrograde conduction was observed via physiological pathways and reached 490 ms. No arrhythmia could be induced using standard pacing maneuvers from either the atrium or ventricle. Next, a single transseptal puncture was performed under fluoroscopy and transesophageal echocardiography. For electroanatomical mapping and ablation, the Thermocool® SmartTouchTM (Biosense Webster, Irvine, CA, US) catheter was selected, and the whole procedure was supported by a 3D electroanatomical system. The radiofrequency applications in the lateral region of the mitral annulus resulted in the complete conduction block through the AP (Figure 1D). The patient was discharged without the in-hospital recurrence of preexcitation on the resting ECG (Figure 1C) and Holter monitoring.

In such a rare case, in the resting ECG, apart from the RBBB, preexcitation syndrome occurred intermittently and was not associated with clinical symptoms. The results of EPS did not clearly indicate the need for ablation. However, data on the patient’s management were strongly limited, and the decision on further better treatment was ambiguous [2]. An argument in favor of ablation could be the progressive reinnervation of the donor’s heart after OHT accompanied by an increase in the number of adrenergic receptors [3]. This may have an impact on preexcitation manifestation on the resting ECG late after OHT, resulting from changes in the conduction properties of both the atrioventricular node and AP. It may be a factor increasing the risk of sudden cardiac death in such patients.