The relationship between anisocytosis, quantitative and qualitative characteristics of coronary atherosclerosis, and major adverse cardiac events in patients with coronary artery disease: Rationale and study design

Red cell distribution width (RDW) is a quantitative measure of anisocytosis, which is the measured index of erythrocyte dispersion with the average value (Figure 1A). In our previously published original study, we showed that the RDW is an independent and strong predictor of death and myocardial infarction (MI) in secondary prevention in patients with coronary artery disease (CAD), with a cut-off value of 14% [1]. 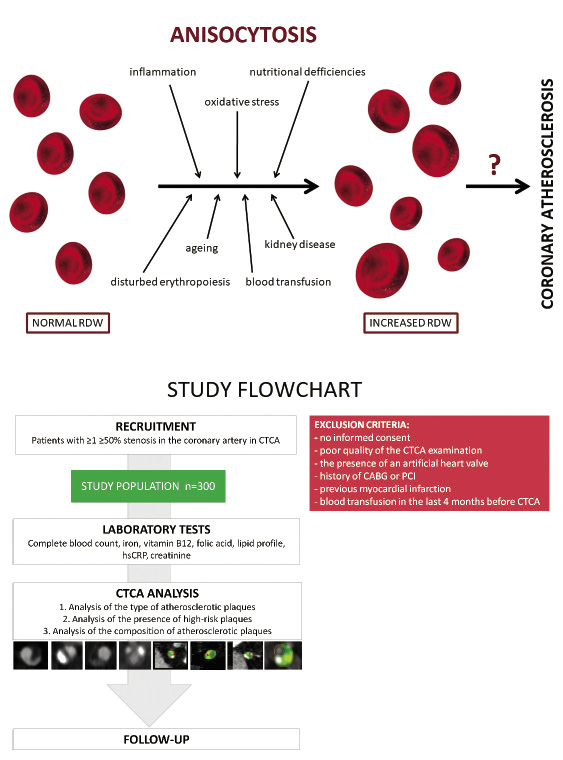 In 2009, Tonelli et al. [2] demonstrated in an analysis involving 4111 patients that increasing RDW is associated with mortality and major adverse cardiovascular events (MACE) in patients after MI. Similar conclusions were presented in recent research including patients with acute coronary syndrome or undergoing percutaneous coronary intervention (PCI) [3–5]. Higher levels of the RDW are associated with a higher incidence of cardiovascular events also in patients with chronic heart failure [6, 7]. In another study, RDW has been identified as an independent predictor of mortality in patients with heart failure due to ischemic etiology, but there was no such relationship for heart failure due to valvular abnormalities [8].

The increasing number of publications confirmed the prognostic value of RDW in patients with CAD; however, the substrate pathophysiology of this relationship is unknown. Some authors suggest that the presence of anisocytosis may reflect chronic subclinical inflammation, inflammatory biomarkers, oxidative stress, and abnormal erythropoiesis [9, 10]. We showed, however, that this relationship does not depend on the level of hemoglobin [1]. In addition, the National Health and Nutrition Examination Survey (NHANES) enrolling 8513 participants showed that the RDW, but not high-sensitivity C-reactive protein (hs-CRP), were associated with cardiovascular mortality independently of traditional risk factors in patients with no previously diagnosed heart disease [11]. None of the studies included potential confounders: the level of hemoglobin, white blood cell count, hs-CRP, levels of iron, vitamin B12, and folic acid.

Other potential mechanisms could include a relationship between the RDW and atherosclerosis or the presence of vulnerable plaques. In an original study published in 2015, Lappegard et al. [12] showed that anisocytosis is associated with the progression of atherosclerosis in carotid arteries in a group of 4677 patients and a 1% increase in the RDW was associated with an increase in the total plaque area of about 0.6 mm2. For coronary arteries — this problem has not yet been investigated.

This is a prospective, single-center, observational study (the study flowchart is presented in Figure 1B). Three hundred consecutive patients were enrolled in the study. The inclusion criteria were signed informed consent; age over 18 years; ≥1 plaque with ≥50% narrowing of the coronary artery lumen with a reference diameter >2.0 mm on computed tomography coronary angiography (CTCA). The exclusion criteria were poor quality of CTCA enabling analysis; the presence of artificial heart valves; previous revascularization; previous myocardial infarction and being a recipient of red blood cell concentrate during the last four months before the CTCA. All patients had their clinical histories and blood tests taken, including lipids, complete blood count (CBC), creatinine, hs-CRP, iron, vitamin B12, and folic acid levels. Anisocytosis was defined as RDW-CV (coefficient of variation) out of the reference ranges which were 11.6%–14.4% for men and 11.7%–14.4% for women. A quantitative and qualitative analysis of CTCA for assessment of atherosclerotic plaques was performed using Syngo CT Coronary (Siemens, Germany), including the presence of high-risk plaque features: low-attenuation plaque (LAP), napkin-ring sign (NRS), positive remodeling (PR), spotty calcium (SC) (Syngo, Siemens), type of plaque (calcified, non-calcified, mixed) (Syngo, Siemens), and their composition (calcified, fibrous, fibro-fatty, necrotic core) (QAngioCT, Medis). The patient management was according to the current European Society of Cardiology (ESC) guidelines. Participation in the study did not influence standard ESC treatment recommendations. The study was approved by the Ethics Committee of the National Institute of Cardiology.

Patient history data were obtained from the patients’ interviews and medical documentation. The follow-up data were collected based on outpatient visits or using a standardized telephone questionnaire. The follow-up was planned as at least 24 months from CTCA, therefore, by definition, the shortest observation period was 2 years, and the longest exceeded 5 years (recruitment started in 2016). The follow-up data were regularly collected after the first and second year from CTCA. Additional follow-up checks up were performed for all patients in January 2022. Data about invasive procedures, as well as non-invasive functional tasting after CTCA, were also collected.

The primary study outcome is a composite of death, nonfatal myocardial infarction according to the 4th Universal Definition of Myocardial Infarction, and revascularization due to CAD progression, confirmed by invasive angiography during long-term follow-up. Out of the enrolled patients, 18 had elective coronary artery bypass grafting, and 65 had elective percutaneous coronary intervention as the result of the index angiography after CTCA. Others were managed medically based on the clinical status and functional ischemia testing. Those procedures were not counted as events.

The secondary study outcomes include the presence of high-risk coronary plaque features, plaque composition, and the plaque burden.

The size of the group was estimated based on the differences in the mean RDW values. Assuming mean RDW at 13.4% (1.1%), 30 events would allow detection of a 6% difference between events/non-events, with alpha error of 0.05 and power of 80%. Based on the previous literature, we assumed an 11% (30 patients) event rate over the planned follow-up period, translating into 270 enrolled subjects [1]. We recruited about 10% patients more than needed; the final study group included 300 patients.

Continuous data with normal distribution will be presented as means (standard deviation [SD]). Non-normally distributed variables will be presented as medians with interquartile ranges (IQR). Patients with and without anisocytosis will be compared for demographic data, clinical characteristics, and CTCA findings. The predictive value of the variables will be evaluated with Cox univariable and multivariable proportional hazards regression analysis. Kaplan-Meier curves will be presented for primary study outcomes. P <0.05 will be considered statistically significant. All analyses will be performed using MedCalc Software (version 13.2.2, Ostend, Belgium).

The study recruited 300 patients (191 men) at the mean age of 67 (8) years who underwent laboratory tests, advanced coronary plaque assessment, and follow-up. Full study results will be presented in the main paper.

Anemia is quite common and often underestimated clinical problem in CAD patients, which can exacerbate angina symptoms due to insufficient blood oxygenation, and thus — with the coexistence of stenotic coronary arteries — impaired oxygen supply to the myocardial muscle.