Atrial fibrillation (AF) affects approximately 2% of the general population [1] leading to an increased risk of cardioembolic stroke. Liver dysfunction in patients with AF necessitates optimization of anticoagulation strategy due to the high risk of thrombotic and bleeding complications [2]. Clinical trials on direct oral anticoagulants (DOAC) for stroke prevention in AF have notoriously excluded patients with liver cirrhosis (LC), therefore the optimal management of such patients remains unclear.

The aim of this case series was to assess the safety and efficacy of DOACs in AF patients with LC.

Forty-two consecutive patients (aged ≥18 years) with LC and AF, receiving DOACs were enrolled at the outpatient department at the John Paul II Hospital in Cracow, Poland, from January 2014 to December 2018. The choice of DOACs was made based on patients’ preferences and left at the physician’s discretion. The exclusion criteria were: severe hepatic impairment (Child-Pugh C), severe thrombocytopenia, recent bleeding, indications for anticoagulation other than AF, and acute coronary syndrome within the preceding 12 months.

Data on demographics, cardiovascular risk factors, comorbidities, and current treatment were collected prospectively. The diagnosis of LC was established based on medical records (liver function tests, ultrasound examination, and/or biopsy). LC was categorized using the Child-Pugh score [5]. We assessed the bleeding and thromboembolic risks using the HAS-BLED and CHA2DS2-VASc scores. The comorbidities were defined as described [6]. Laboratory investigations were performed at enrolment.

The ethical committee of Jagiellonian University approved the study.

Follow-up visits were performed on a 3–6-month basis (an ambulatory visit or telephone contact). The primary clinical outcome of the study was a composite of stroke, transient ischemic attack (TIA), systemic embolism (SE), major bleeding, and all-cause mortality. Secondary endpoints were: SE, stroke/TIA, major bleeding, clinically relevant non-major bleeding (CRNMB), and/or death considered separately. Stroke and TIA were diagnosed based on World Health Organization criteria. The diagnosis of SE was based on a clinical history consistent with an acute loss of blood flow to a peripheral artery (or arteries) supported by evidence of embolism from surgical specimens, angiography, vascular imaging, or other objective testing. Major bleeding and CRNMB were defined according to the International Society on Thrombosis and Haemostasis [7].

Comparison of AF patients based on the severity of liver dysfunction showed no differences in demographics, comorbidities, and most laboratory variables (Supplementary material, Table S1). As expected, bilirubin level was higher and albumin level was lower in Child-Pugh B (P <0.005; P <0.001, respectively).

There were 2 cerebrovascular events (1.2%/year, both on apixaban, both in patients with Child-Pugh B and with high thromboembolic risk). A single patient experienced a stroke after cessation of DOAC therapy, while on prophylactic-dose enoxaparin (CHA2DS2-VASc 4). The other patient had a prior ischemic stroke (CHA2DS2-VASc 5). We observed two SE events in patients with Child-Pugh A (1.2%/year, both on dabigatran), including one episode after discontinuation of DOAC and the other one after a prior stroke.

Eight relevant bleeding events were recorded (4.8%/year). Three patients had major (all upper gastrointestinal) bleeding events (2 patients on dabigatran and one on rivaroxaban), including 2 with Child-Pugh B. Three of them underwent invasive therapy of varices. Two patients with major bleeds were on proton-pump inhibitor.

Five patients (11.2%), including 4 on apixaban and 1 on dabigatran, suffered from CRNMB. In terms of liver injury, 3 subjects had Child-Pugh A and 2 had Child-Pugh B. None of the bleeding patients had international normalized ratio >1.7.

Ten patients (23.8%) died during follow-up and no death case was related to stroke and/or bleeding (Supplementary material, Table S1).

There was no difference in clinical outcomes related to the type of DOACs, which suggests that the 3 drugs are similar in terms of safety and efficacy in mild-to-moderate liver injury.

The patients with moderate LC (Child-Pugh B) had a higher incidence of primary outcome than those with mild LC (n = 10; 13.2%/year vs n = 5; 5.4%/year). Overall, Child-Pugh A showed a 70% lower risk of the composite outcome than class B (HR 0.30; 95% CI, 0.09–0.94; Figure 1), which supports robust evidence that the more advanced LC, the higher risk of both bleeding and thromboembolism due to complex hemostatic abnormalities reviewed recently by International Society on Thrombosis and Haemostasis experts [9]. 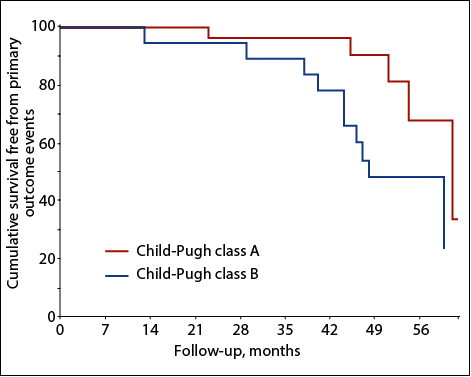 We demonstrated in Polish patients that reduced-dose DOACs can be used in AF patients with mild-to-moderate LC, defined as Child-Pugh A and B. To our knowledge, this report is the first to suggest that Child-Pugh B patients might require different anticoagulant strategies to ensure safe stroke prevention, including improved patient education and possibly measurements of DOAC levels [3].

Evidence for the efficacy and safety of DOACs in AF patients with this disease is derived from observational studies. In a cohort study on AF patients including 89.7% on reduced-dose DOACs, the incidence of thromboembolism and major bleeding was 3.2%/year and 2.9%/year, respectively [10], whereas in the current study the respective rates were 2.4%/year and 1.8%/year, and the risk of stroke and relevant bleeding was relatively low. It suggests that in real-life the use of full-dose DOAC in LC might pose an unacceptable risk of major bleeding given the presence of esophageal varices and limited access to effective reversal agents for apixaban or rivaroxaban; solely anticoagulant effects of dabigatran can be quickly reversed [11, 12]. However, idarucizumab did not lead to more frequent use of dabigatran in our AF patients with LC at high-bleeding risk.

Several limitations should be acknowledged. The study did not include a control group on vitamin K antagonists and the sample size was limited, so it was underpowered to compare 3 different DOACs. However, concomitant LC is observed solely in 3.3% of AF patients [13].

In conclusion, reduced-dose DOACs are relatively safe and effective in cirrhotic patients with AF. Further cohort studies are needed to validate the present preliminary data.

Funding: The work was supported by the grant of Jagiellonian University Medical College (grant no. N41/DBS/000516, to MZ).