Abdominal aortic aneurysm (AAA) is defined as a widening of the aorta below the renal arteries with a diameter greater than 3 cm [1] or exceeding 50% of the normal diameter, measured, for example, above the aneurysm sac [2]. For the purpose of this study the authors adopted the first definition, which has its justification in screening programmes for abdominal aortic aneurysms carried out in other countries where the results have been published. The prevalence of AAA is estimated at 4–8% in men aged 65 years and older and 1–2% of women in this age group [3–5]. AAA is usually asymptomatic, and its first sign may be rupture, which is associated with 59–83% mortality [6].

In the United States ruptured AAA is the 11th most common cause of death [7]. The risks factors associated with AAA are: older age [6], male sex [4], and smoking [7, 8]. Other potential risk factors are: aneurysms of other arteries, chronic heart failure, cerebrovascular disease, atherosclerosis, hypercholesterolaemia, and arterial hypertension [9, 10]. Female gender and diabetes mellitus are so-called “protective” factors in AAA development. In the 1990s, large randomised studies showed that ultrasound screening can reduce risk of AAA rupture in males [9]. The abdomen ultrasound screening test seems to be the standard procedure for the early detection of AAA, which has a high sensitivity (96%) and specificity close to 100% [11–13]. In addition to, the abdomen ultrasound is a non-invasive, simple, and inexpensive test. Since 2007, men in the United States, aged 65–75 years, who have ever smoked are offered a single ultrasound scan examination of the aorta. In the United Kingdom, since 2009, the National Health Service Abdominal Aortic Aneurysm Screening Programme is applicable to 65-year-old men [13]. Recently published data from Western Countries show a decreasing number of AAAs. This may be due to widely incorporated population-based screening strategies [9]. So far, no studies focused on prevalence of AAA have been conducted in Central and Eastern Europe.

The study was conducted in a rural/urban Gniewkowo commune in central Poland, in the period from October 2009 to April 2012, and included men aged 60 years and above and women aged 65 years and older. Patients were divided into three groups: men aged 60–64 years (n = 198), men aged 65 years and older (n = 355), and women aged 65 years and older (n = 365). In total, during the study, 922 people were examined. Two research methods were used: 1) the questionnaire method; 2) ultrasound measurement of the diameter of the abdominal aorta. The questionnaire used closed questions and consisted of parts relating to: 1) identification and demographic data; 2) AAA-associated risk factors such as smoking and family history of AAA; and 3) information on the prevalence of diabetes mellitus, arterial hypertension, and myocardial infarction/acute coronary syndrome (MI/ACS). Analysis of the data from the questionnaire determined the relationship between the studied risk factors and the development of AAA. Subsequently the abdominal ultrasonography was performed to assess the abdominal aorta. Ultrasound examination was performed using a convex transducer, and the diameter measurement was made on the abdominal aorta (from renal arteries to the bifurcation). Two measurements were taken into account: the anterior-posterior and transverse. The cut-off value for aneurysm was the diameter ≥ 30 mm. The lists of patients invited to join the study was based on the populations covered by the care of primary care physicians in the municipality. The response rate was 61% of patients (Table 1). 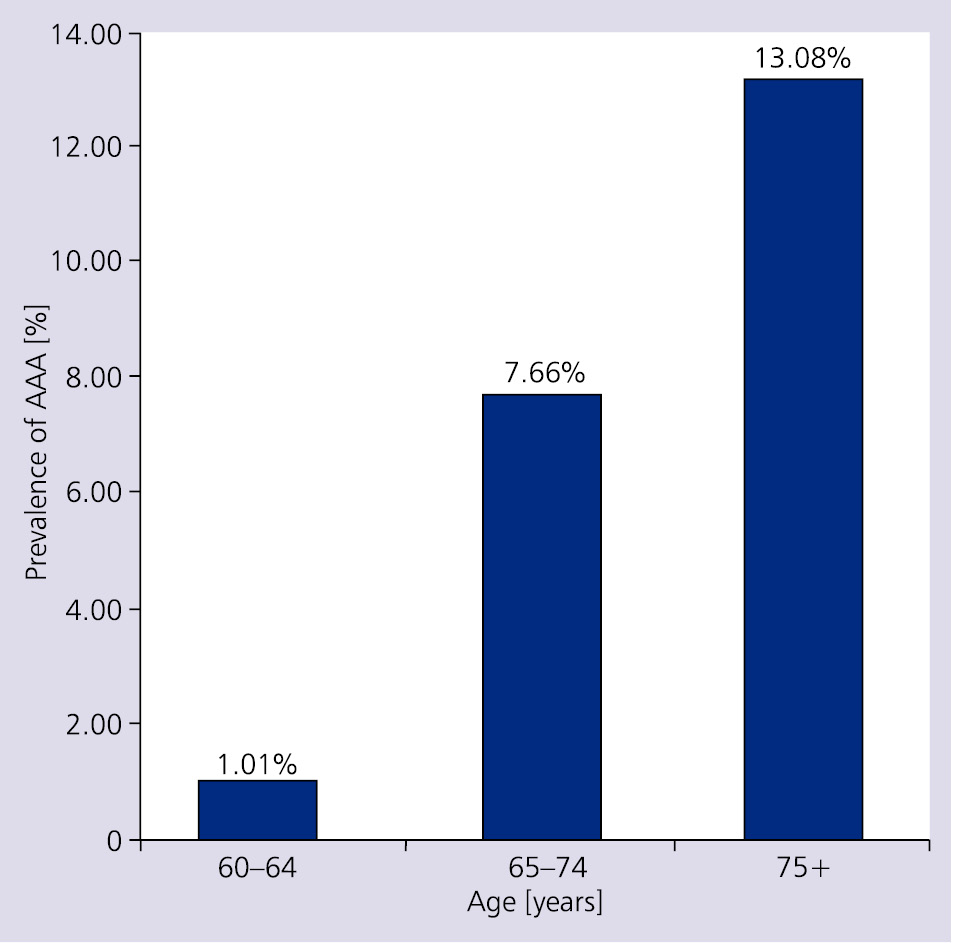 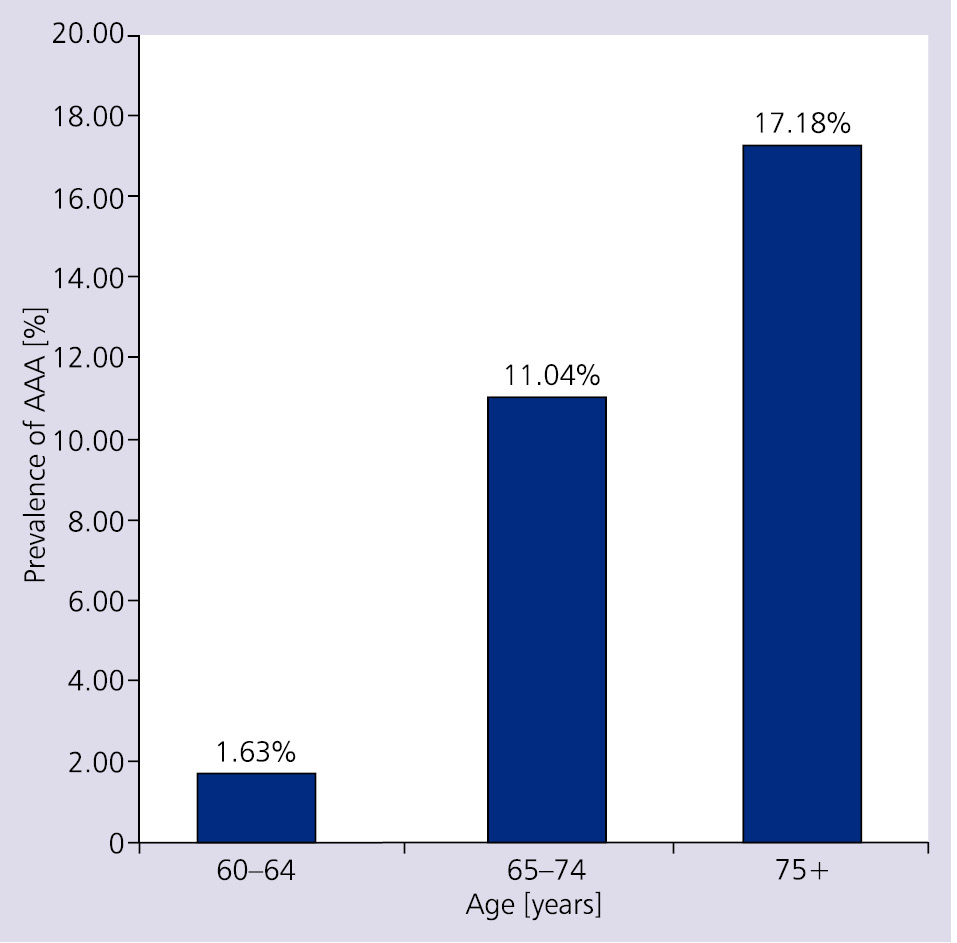 Figure 2. Abdominal aortic aneurysm (AAA) in men smoking currently or in the past

In the entire study population, 38 cases of AAA were found, for which the following algorithm of the follow-up (depending on the size of the aneurysm) was used:

In six men in the group aged 65 years and older, who were diagnosed with AAA larger than 55 mm, the operation was performed urgently within one month from diagnosis. Another eleven people were operated on in the subsequent five years, and eight patients from the observed group died in the period following diagnosis. Four of them died of cancer, one in the course of severe post-infarction heart failure, and two died suddenly — in these cases, no autopsy was performed. Another patient diagnosed at the age of 61 years also died suddenly, probably due to aneurysm rupture. He was diagnosed with lung cancer and was disqualified from surgery due to the severity of the disease (Table 3).

Large scale population-based studies carried out in the 1980s and 1990s showed that AAA occurs in 4.9–8.9% of men over 65 years old, its course is frequently asymptomatic, and sometimes the first symptom of aneurysm is rupture, characterised by roughly 65% mortality [3–5]. The introduction of population-based screening reduced mortality associated with AAA by 45% [14]. A meta-analysis published in January 2014 demonstrated that a one-time screening for AAA in men aged 65 years and older is associated with a decreased incidence of AAA ruptures and mortality associated with the AAA, but has no effect on total mortality [9]. So far, the prevalence of AAA in Poland and Central and Eastern Europe has not been evaluated. The aim of this study was to evaluate the prevalence of AAA in the population of the one of the municipalities in central Poland. The age groups in men have been chosen to compare obtained results with other population-based studies. After finishing the screening programme with the population aged 65 years and over an additional sample with mean age 60–64 years was invited to find the proper cut-off age for the Polish population. In 2010, in a special issue of the ‘European Journal of Vascular and Endovascular Surgery’, the current guidelines for the treatment of AAA were published [15, 16]. According to these guidelines, mortality from AAA can be reduced by almost a half within four years, mostly by reducing the incidence of ruptured aneurysms due to population screening for AAA of older men, in areas where the prevalence is 4% or more (level of evidence 1a, strength of recommendation A). In two studies conducted in the Kuyavian-Pomeranian voivodship in 2012 and 2013, AAA during screening among men aged 65 years and more was found in 5.4% of patients [17, 18]. The data obtained in this study by the authors showed that the prevalence of AAA is a bit higher than the results obtained in the 1990s. In the authors’ opinion, this fact may correspond to a larger number of current or ex-smokers (among men aged 65–75 years they constituted 65.72%, and in the group aged 76 years and more, 59.81% of respondents). According to the recommendations of the European Society of Cardiology, Poland is included in the group of countries at high cardiovascular risk. This is primarily due to a greater percentage of current or past smokers than in Western Europe and a higher prevalence of lipid disorders, arterial hypertension, and acute MI/ACS.

The incidence of MI in the group of 65–75-year-olds was 19.35%, and in the group aged 76 years and more it was 26.16%, which can also influence the results obtained. The study also confirmed a significantly lower incidence of AAA among women aged 65 years and over (0.82% vs. 9.29%, p = 0.00002) compared to that in men, and it was in line with expectations. This may happen due to the large number of diabetic patients in that group (more than 50% of study participants suffered from diabetes and prediabetes) [19]. In the study population, in 38 cases of AAA only one person knew of fact the presence of an aneurysm prior to submission to the test; the others did not have that awareness. Extrapolating data from the population of the examined community, approximately 80,000 unidentified AAAs can be expected among men aged 65 years and over in Poland, and among them almost 15% require surgery urgently.

The study confirmed the desirability of ultrasound screening in the diagnosis of abdominal aortic aneurysms in men over 65 years of age, especially with a history of smoking. Such a procedure should become standard based on the recommendations of the European Society of Vascular Surgery.

The results of this study and the results of studies conducted in the years 2011 and 2012 among men aged 65 years were a contribution to the development of the Programme for Early Diagnosis of abdominal aortic aneurysms, which is intended to include men aged 65 years, who are current/past smokers. This programme was approved by the Health Technology Assessment Agency and has been implemented in Poland.