Coronary computed tomography angiography for the assessment of SYNTAX score

The SYNTAX score (SXScore), developed in 2005 [1, 2], although not perfect, is a widely used tool for the assessment of coronary artery disease (CAD) complexity in patients with multivessel disease or in cases with left main (LM) stem involved. Five-year follow-up of the patients enrolled to the SYNTAX trial confirmed the role of SXScore in the prediction of adverse effects after percutaneous coronary intervention (PCI) or coronary artery bypass graft (CABG) [3]. It has been found that the SXScore result correlates with the outcome of patients undergoing elective or acute coronary syndrome-associated PCI [4, 5].

Coronary computed tomography angiography (CCTA) is already a well-established diagnostic method in certain groups of patients [6], and its usefulness has recently been evaluated in new indications, including diagnosis of acute chest pain [7] and in-stent restenosis [8]. The result of a CCTA examination is now available for a significant number of patients scheduled for myocardial revascularisation due to multivessel/LM CAD. Because the results of investigations carried out to-date are conflicting [9, 10], in this retrospective study we aimed to define the feasibility of calculating SXScore using CCTA. If it is possible, it might facilitate the decision-making process for the physician performing coronary angiography in this high-risk subgroup of patients. Because inter- and intra-observer reproducibility of the SXScore assessment was reported to be only moderate and varied between studies [11, 12], we also decided to directly compare the intra-modality (invasive coronary angiography [ICA vs. ICA and CCTA vs. CCTA]) and inter-modality (ICA vs. CCTA) reproducibility of the SXScore to determine if the type of diagnostic method or the SXScore algorithm itself is the main source of possible inaccuracy.

The study was based on a high-volume single-centre registry. Consecutive patients with at least two-vessel or LM CAD diagnosed with ICA, scheduled for revascularisation between 2009 and 2012, and in whom CCTA was performed for clinical indications within six months before diagnostic ICA, were included in the analysis. All the patients had at least one significant lesion scheduled for revascularisation (at least 50% stenosis assessed by visual estimation) in an epicardial coronary vessel > 1.5 mm in diameter. Patients with previously performed PCI or CABG were excluded.

The acquired images were evaluated by two readers experienced in the assessment of both ICA and CCTA. Calculation of the SXScore was done according to the rules and definitions available online [13]. For CCTA, multiple planar reconstructions (MPR) and maximum intensity projections (MIP) were used for the assessment of number of lesions, severity, and morphology, while three-dimensional volume-rendering reconstructions were used to assess the right/left dominance and angles. Curved-MPR was used for the measurements of lesion length.

Two independent evaluation runs were performed in three-month intervals. In RUN1 SXScore was calculated separately using ICA and CCTA by different readers. In case of any discrepancy a decision was made by consensus. In RUN2 SXScore was calculated in the same way; however, the readers were exchanged (the person who assessed ICA in RUN1 assessed CCTA in RUN2, and vice versa). Additionally, to minimise the potential effect of the learning curve, calculations for the first 40 patients form RUN1 were discarded and images were re-assessed at the end. Data from RUN1 were used for comparison of CCTA and ICA, while data from RUN2 and from RUN1 were used to assess the intra-modality variability. In all analyses ICA was used as a standard reference.

Normally distributed continuous data were presented as mean ± standard deviation (SD), and non-normally distributed as medians and inter-quartile range (IQR). Spearman’s correlation was used to compare the results of SXScore calculation with ICA and CCTA. The Z statistics were used to compare the Spearman’s R coefficients. Cohen’s kappa statistic was applied to assess inter-modality (ICA vs. CCTA) as well as intra-modality variability (ICA from RUN1 and RUN2 and CCTA from RUN1 and RUN2) regarding SXScore tertiles and selected morphological features influencing the final result of SXScore calculation. Bland-Altman’s plots were generated for comparison of ICA and CCTA. MedCalc version 9.3.8.0 (MedCalc Software, Marierkerke, Belgium) was used for all statistical analyses.

A total of 90 patients (of whom 60% were male) of mean age 63.8 ± 8.9 years filled the inclusion criteria within the study period. Eighty-one (90%) patients were qualified for PCI and nine (10%) for CABG after diagnostic ICA. Fifty-eight (64%) subjects were diagnosed with two-vessel CAD and 32 (36%) with three-vessel or LM disease. Demographic and clinical characteristics of the patients are presented in Table 1.

Table 1. Demographic and clinical characteristics of the study population

Bland-Altman plots for inter- and intra-modality correlation in the estimation of total SXScore revealed the best reproducibility between ICA RUN1 and RUN2 (mean –2.2), followed by CCTA RUN1 and CCTA RUN2 (mean 8.9) and ICA and CCTA (mean 18.4) (Fig. 2).

To determine if SXScore calculation with CCTA would change the patients’ qualification into tertiles validated in the SYNTAX trial (< 23; 23–32 and > 32 points calculated by ICA) [2] kappa values were calculated. Similar reproducibility in terms of patients’ assignment into tertiles was observed for ICA vs. CCTA (k = 0.4), CCTA RUN1 and RUN2 (k = 0.51) and ICA RUN1 and RUN 2 (k = 0.47). For example, from 78 patients qualified to the lowest SXScore tertile (< 23 points) based on ICA, 16 (20.5%) patients were classified to the intermediate tertile (23–32 points) and two patients to the highest tertile (> 32 points) after calculation of SXScore based on CCTA, which would have important clinical implications. Due to gte low mean SXScore in the analysed cohort, additional total SXScore quantification into quintiles was made (< 10; 11–20; 21–30; 31–40, and > 40 points calculated by ICA). The inter-modality reproducibility in patients’ assignment into quintiles (k = 0.17) was lower in comparison to intra-modality reproducibility of CCTA (k = 0.34) and ICA (k = 0.43) (Fig. 3). 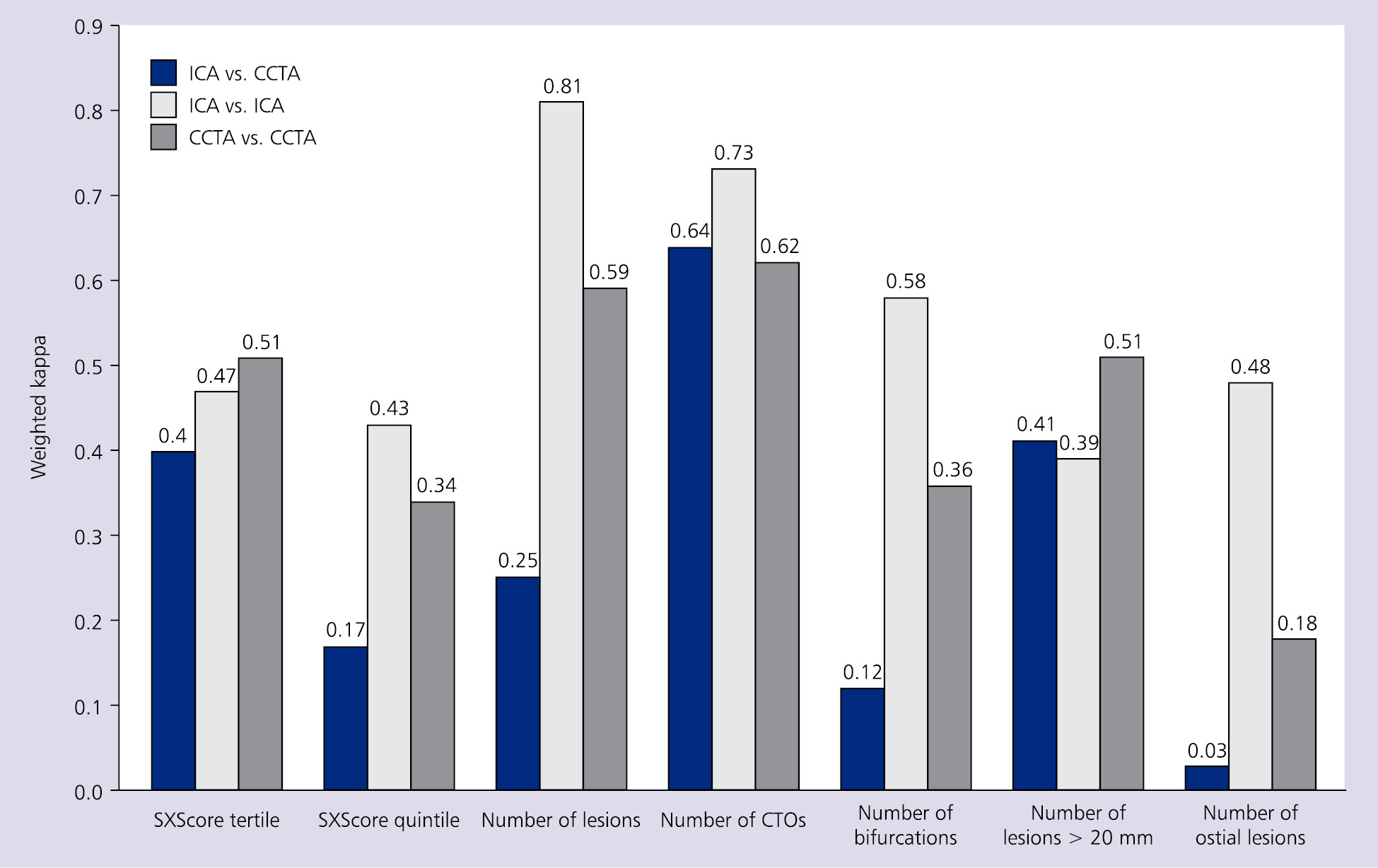 To determine the variables of SXScore that were best and worst reproduced by CCTA, a subanalysis was performed. Variables selected for analysis were: total number of lesions, number of bifurcation lesions, long lesions (> 20 mm), aorto-ostial lesions, heavily calcified lesions, and chronically occluded vessels (CTOs). The best reproduced variable by CCTA in comparison to ICA was the number of CTOs (k = 0.64) and number of long lesions (k = 0.41), while poor reproducibility was observed for the number of bifurcations (k = 0.12) and ostial lesions (k = 0.03) (Fig. 3).

The number of patients who undergo CCTA before ICA and even instead of ICA is continuously growing. This is apparently because of improvements in CT-scanner construction and the growing experience of medical staff in interpreting images, which results in good reproducibility in detection of coronary lesions [14, 15]. Good accessibility and low-invasiveness encourage physicians to precede invasive procedures in cases of stable CAD and sometimes of acute chest pain with CCTA.

Assuming that the calculation of SXScore may be performed reliably using CCTA alone, the decision-making process in patients with complex CAD would be faster. Obtaining information about SXScore before invasive diagnosis would give useful information on long-term risk stratification [3–5, 16] and therefore possibly reduce the number of required invasive procedures. In selected cases with high SXScore and convenient anatomy the decision to perform CABG might even be made without ICA.

To our knowledge, direct comparison of CCTA and ICA in the calculation of the SXScore was already described in two papers [9, 10]. The results of those studies were not concordant.

Popadopoulou et al. [9] calculated SXScores for 80 patients, only 45% of whom had two- or three-vessel CAD. Median SXScore for ICA and CCTA was 10.5 and 13.0, respectively, and there was significant correlation (Spearman’s R = 0.73) between calculated results. Very good reproducibility in terms of patient classification into tertiles was found (k = 0.8); however, the tertiles were different form the standard thresholds used in the SYNTAX trial.

To our study only patients with multivessel or LM-involved CAD were included, to allow comparability with the SYNTAX trial population. Also, standard SXScore tertiles (< 23; 23–32, > 32 points) were used to compare reproducibility; however, the median ICA SXScore in our study was low (11.5; IQR 10.2–14.0). In our setting, in contrast to the results of Kerner et al. [10], CCTA significantly overestimated total SXScore. However, we confirmed the conclusion of Kerner et al. [10] that performance of CCTA is good for recognising CTOs and is low for bifurcations. We found higher reproducibility in long lesions (> 20 mm; k = 0.41 vs. k = 0.12 by Kerner et al. [10]).

The very low number of patients with high SYNTAX score is probably the main limitation of the study. Therefore, any reasoning concerning this particular subgroup of patients should be very careful.

The results of our study, which compared the CCTA-derived SXScore with SXScore derived from ICA, show moderate inter-modality agreement between CCTA and ICA for SXSscore calculation. However, the observed agreement is only slightly worse than intra-observer agreement for angiographic SXScore evaluation. Most of the observed variability can be assigned to the characteristic of the SXScore itself, not to the choice of imaging method. Overall, the use of CCTA to assess the SXScore should be cautious.