A 25-year-old woman was admitted to the Emergency Department because of intermittent chest pain recurring for the preceding 12 h. Previous medical history except for smoking was not relevant and the patient denied any illicit substance intake. Electrocardiogram showed a borderline (0.1–0.15 mV) ST segment elevation in most of the precordial (V2–V6) as well as inferior wall (II, III, aVF) leads, and a troponin (TnI) test was positive. The patient was referred for coronary angiography, in which a large thrombus filling the distal part of the left anterior descending artery (LAD) and the presence of an insignificant lesion in the proximal part of the vessel were found (Fig. 1A). After repeated inquiry, the patient admitted cocaine use on the night preceding the event as well as previous occasional cocaine intake. During the angioplasty the guiding catheter moved into the vessel, causing dissection in the proximal segment of the LAD (Fig. 1B). The dissection increased rapidly towards the left main artery, causing severe flow limitation in the LAD (Fig. 1C). An intravascular ultrasound examination showed dissection originating from the ostial LAD region (Fig. 2A) and a large, positively remodelled hypoechogenic plaque in the proximal segment of the artery (Fig. 2B). A single everolimus eluting stent (XiencePRO 3.5 × 38 mm) was implanted from the ostium of the left main artery (Fig. 1D; Fig. 2C), and proper epicardial flow was restored. The remainder of the hospital stay was uneventful, peak TnI concentration reached the level of 18.0 ng/mL, and echocardiography showed hypokinesis of apex and apical segments of anterior wall with ejection fraction of 52%. Although cocaine-induced myocardial infarction occurrence is far from being casuistic, data regarding in vivo intravascular coronary artery visualisation in this population is scant. On the other hand, iatrogenic coronary artery dissection is an uncommon phenomenon, complicating less than 0.1% of percutaneous coronary procedures. The existence of a pathologic process within the vessel wall might be one of the factors predisposing to its occurrence. Our case depicts the presence of a large atherosclerotic plaque in the coronary artery of a young, cocaine-abusing female. Underestimation of the atherosclerotic burden in the coronary angiography led to the inappropriate procedural strategy and exposed the patient to the risk of possibly life-threatening complications. Moreover, the extent and progression of coronary artery dissection might, in our opinion, reflect the presence of vessel wall weakening in cocaine abusing-subjects, making them prone to this rare complication of percutaneous coronary procedures. 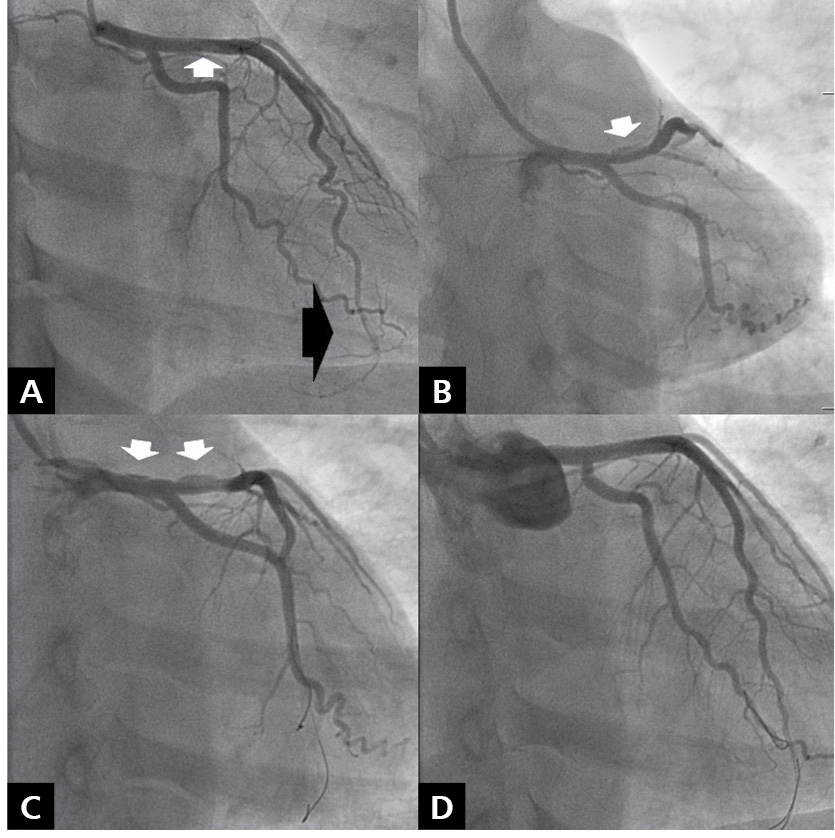 Figure 2. A. Dissection in the proximal left anterior descending artery (LAD) segment; B. Positively remodelled hypoechogenic plaque in the proximal segment of the LAD; C. Immediate result of stenting