Mitral annular calcification (MAC) occurs as a result of a chronic degenerative process of the fibrous support structure of the mitral valve. MAC is present in approximately 8%–15% of the general population, more often in women [1–3]. MAC commonly coexists with aortic stenosis (AS) [4, 5] and may have similar etiology and pathophysiological mechanism [6, 7]. About one-fifth of patients with mild to moderate AS and half with severe AS have at least some degree of MAC [4, 8]. Half of all patients undergoing transcatheter aortic valve implantation (TAVI) have MAC, and approximately 20% have severe MAC [8–11]. The latter is associated with increased all-cause and cardiovascular mortality and with conduction abnormalities in patients undergoing TAVI [10, 11]. Several studies assessed the role of mitral regurgitation (MR) following TAVI [12, 13], but only few examined the influence of MAC on its changes after TAVI [8, 11, 14, 15]. MAC frequently coexists with calcification of mitro-aortic continuity (CMAC) [16]. The latter may influence the results of TAVI, especially in the case of deeper implantation, protruding to left ventricular outflow tract (LVOT). To the best of our knowledge, the role of CMAC on the occurrence and dynamic changes of MR during TAVI procedure has never been examined.

In the present study we aimed at qualitative and semi-quantitative analysis of calcifications of the mitral complex — MAC and CMAC in multi-slice computed tomography (MSCT) in patients qualified to TAVI, in order to assess their impact on the occurrence and dynamics of MR following aortic valve implantation.

We retrospectively examined 94 consecutive patients with severe AS who underwent TAVI procedure at the Institute of Cardiology in Warsaw, between January 2016 and December 2017. The study protocol was approved by the local Bioethics Committee. All examined patients presented severe symptomatic AS and had been disqualified from surgical aortic valve replacement by an institutional Heart Team. Informed consent for diagnostic and treatment procedures was obtained from all patients.

Before TAVI, all patients underwent routine laboratory testing, transthoracic echocardiography (TTE), coronary angiography, MSCT as well as angio-MSCT of iliac and femoral arteries [17]. Aortic valve anatomy and diameter were evaluated by TTE and MSCT [18]. These studies were used for proper planning of the valve implantation in terms of selection of access route, valve size, and complication risk assessment.

A prospective ECG gated non-contrast scan was performed to measure the Calcium Score of the aortic valve and mitral annulus. MAC and CMAC were evaluated in MSCT after contrast administration.

MSCT with contrast was routinely performed in patients before TAVI for evaluation of coronary arteries and access to TAVI (entire aorta and iliofemoral arteries). A bolus of 70 to 100 ml (depending on the patient body mass) of iodinated contrast media (Ultravist 370 Bayer Pharma AG) was administered through an antecubital vein at a rate of 4.0 ml/s.

MAC was defined as the presence of dense calcium deposits at the base of mitral leaflets at the level of the mitral annulus. The quantitative assessment of calcifications — Calcium Score mitral annulus — was done using the Agatston scale based on the maximum X-ray absorption coefficient measured in Hounsfield units (HU) and the measurement of the calcium deposits size. The absorbing structures were considered to be 130 HU and more. 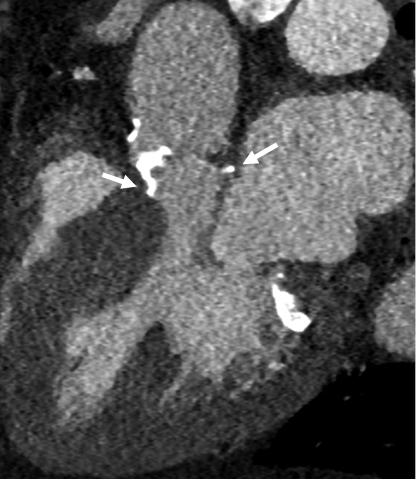 Figure 1. Comparison of calcifications localized in the anterior and posterior aspect of the left ventricular outflow tract in oblique sagittal projection on multislice computed tomography

Subsequently, patients were classified in a dichotomous manner as having non-severe or severe MAC and CMAC (grades 0, 1, and 2 versus grade 3). Classification was performed by a single observer, experienced in the assessment of pre-TAVR CT scans, blinded to the clinical and other imaging data.

All patients underwent TTE (Vivid E95, Vivid S70) prior to the procedure, either during the same or preceding hospitalization, as part of diagnostic routine assessment. The follow-up transthoracic echocardiographic examination was routinely performed before discharge following TAVI procedure and up to 30 days after TAVI.

MR was evaluated in an integrated manner, according to a current standard, based on color Doppler jet area, vena contracta, proximal isovelocity surface area, effective regurgitant orifice [22, 23], and graded as: 0, no MR; 1, mild MR; 2, moderate MR; 3, severe MR; with significant MR defined as grade ≥2. Changes of MR severity following TAVI were defined as no change, improvement, or worsening by at least one degree.

Continuous variables with normal distribution were presented as means with their standard deviations, and in the case of non-normally distributed variables (as confirmed by the Kolmogorov-Smirnov test), in the form of the median and the interquartile range. Categorical variables were expressed as percentages. Patients were divided into groups with severe vs non-severe/absent MAC and CMAC, as previously defined. Comparative analyzes of continuous variables were done using the Student t-test or the Mann-Whitney tests, and of discrete variables using the chi-square test.

In order to evaluate if the degree of calcification of mitral complex affects MR in patients undergoing TAVI, single- and multi-variable logistic regression analyses were used.

A univariate logistic regression analysis was performed to obtain the odds ratio for worsening MR after TAVI.

Thereafter, a multivariable logistic regression analysis was performed using the variables with P-values <0.10 in the univariate analyses, to examine their independent association with MR worsening after TAVI. Results of the regression model were presented as odds ratios, with 95% confidence intervals. A P-value <0.05 was considered statistically significant. All analyses were performed using SAS 9.2.

The study group consisted of 94 patients (63 female [67.1%]), undergoing TAVI. The mean (SD) age of patients was 79.9 (8.02) years. Clinical characteristics and echocardiographic parameters of the studied patients are presented in Table 1.

Examples of MAC and CMAC in MSCT are shown in Figure 2 and Figure 3. 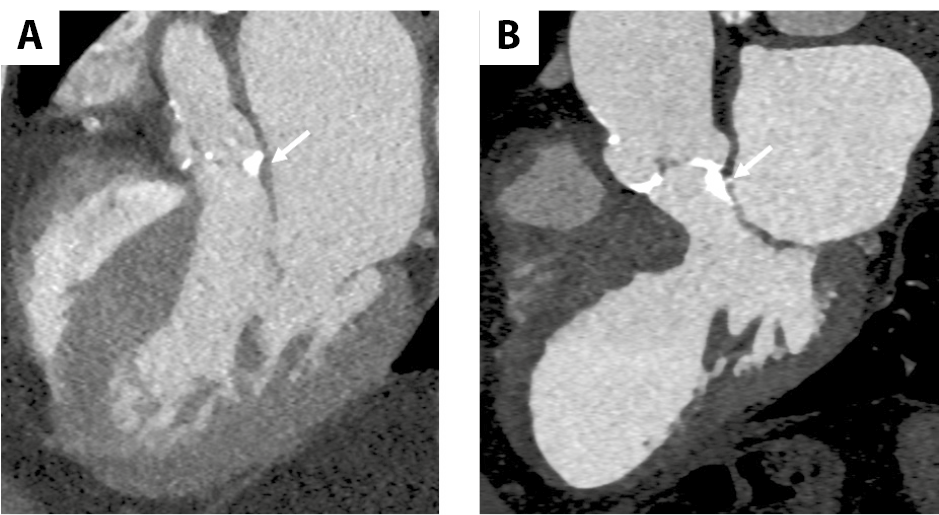 MAC and CMAC are frequent in severe aortic valve stenosis. In our study, MAC and CMAC were present in approximately half of the patients undergoing TAVI. In our series, MR severity changed following TAVI, as also described by others [8, 11–13, 24, 25].

Female sex, higher transvalvular gradient, and older age were more frequently present in patients with MAC, which is consistent with previous reports [4, 26]. Anatomic features, important from diagnostic and procedural point of view, such as narrower aortic annulus and LVOT and thicker interventricular septum, were associated with severe MAC. Conversely, other conditions frequently reported as risk factors for MAC (e.g, hypertension, diabetes mellitus, advanced kidney disease, atrial fibrillation) were not independent predictors in our population, perhaps due to smaller numbers and preselection of patients with AS [2, 27]. Only few studies examined the influence of MAC on the degree of MR after TAVI, with discordant results [8, 11, 14, 15]. In some series MAC was associated with worsening of MR [8, 14, 15]. Other authors did not report such relationship [11]. We did not observe differences in the degree of MR after TAVI in patients with and without MAC; however, the number of patients in whom the MR worsened was small.

In contrast to the relatively well defined role of MAC in patients with AS, including those undergoing TAVI, little is known about the potential role of CMAC in these patients. We demonstrated a correlation between CMAC and higher Calcium Score aortic valve, thicker ventricular septum, narrower aortic annular and LVOT diameters, smaller AVA, as well as female sex. These are important endpoints, relevant both to the diagnosis of severe AS, and to procedural issues, such as valve sizing, as well as prognosis [28]. A closer look at CMAC in larger datasets is necessary in order to better establish its influence on the procedure and its long term results.

The presence or absence of CMAC in patients with MAC may offer explanation to the discordant results of the studies examining the influence of MAC on the degree of MR after TAVI. Previous studies did not clearly distinguish between MAC and CMAC. In our study however, in contrast to MAC, the presence of CMAC was an independent predictor of worsened MR. To the best of our knowledge, this study is the first in which the role of CMAC in MR development was assessed. This is an important and novel finding, that may have implications in clinical practice. CMAC influences both LVOT geometry and mitral valve function. Theoretically, the presence of CMAC, working as a rigid scaffold, may limit potentially favorable reverse remodeling of mitral valve apparatus related to improved left ventricular function following TAVI.

The presence of CMAC may also influence prosthetic valve positioning and expansion, indirectly affecting also anterior mitral valve leaflet movement restriction. This is probably especially relevant in case of self-expandable valves protruding to a greater extend to LVOT, as valve implantation depth is related to the presence of MR [29].

In our series, lower LV ejection fraction predicted MR improvement. This was also observed by others [15, 30, 31]. Apart from reduced retrograde transmitral gradient, improvement of MR in patients with lower EF (also within normal limits) may be partially explained by the removal of afterload mismatch following TAVI [32], as acute improvement in MR reported following TAVR was related to immediate post-procedural changes in left ventricular hemodynamics and improved mitral leaflet tethering, resulting from reduced afterload [33]. In our patients, as in the other series, MR worsened following TAVI only in a minority of patients [34–37].

The main limitation of the present study is that it represents a retrospective, single-center experience. The relatively small population, allowed only for hypothesis generating results.

The study demonstrated that CMAC was prevalent in patients undergoing TAVI and associated with MR worsening. This is a novel finding, which may be of relevance for procedural planning and prevention of implantation failure. Its presence is of particular importance in patients with severe AS and coexisting MR in whom arguments for and against surgical repair of concomitant mitral insufficiency are considered, as opposed to isolated aortic valve procedure. Severe CMAC may be an additional argument to consider bivalvular cardiac surgery in patients with equivocal MR accompanying AS, rather than isolated percutaneous aortic procedure.