1st Department and Chair of Cardiology, Medical University of Lodz,

It was estimated by the World Health Organzation in 2018 that 2.4 billion people, i.e., 43% of the global population over 15 years old, consumed alcohol [1]. In particular, western countries have a higher incidence of dilated cardiomyopathy with an alcoholic etiology, ranging from 4% to 47% [2, 3]. Even so, the pathophysiology of alcohol-induced myocardial damage remains unclear, and there is a need for deeper study of the relationship between the consumed ethanol dose and severity of myocardial injury and outcomes. Novel imaging modalities provide an opportunity for more sensitive assessment of heart damage [4]. Deformation parameters with the leading global longitudinal strain allow myocardial function to be characterized quantitatively, and often more precisely than conventional variables. Furthermore, the myocardial wall can be divided into tiers according to the dominant direction of myocardial fibers (viz. endo-, epi- and mid-wall layers), which may be followed separately during deformation assessment [4].

Clinical and laboratory data was collected from two groups, viz. alcohol over-users (ALC) and controls (CG) over the period 2015–2020. The alcohol dose was expressed in alcohol units (AU), with one AU representing ten grams of pure ethanol, irrespective of beverage type. The declared amount of alcohol consumed during a patient’s life, i.e., total dose (TD), was expressed in AU, expressed as liters. Daily or weekly alcohol dose was calculated as TD divided by a period of time, i.e., AUD being alcohol units per day and AUW being alcohol units per week. The approximate accuracy of the declared alcohol dose was indirectly verified with the Michigan Alcohol Screening Test (MAST), which indicates whether the patient is addicted to alcohol and assesses addiction severity. Patients with a MAST score <4 (very low risk of alcohol addiction) were not included in the study.

The inclusion criteria comprised the following: age >18 years, reported alcohol overuse ≥10 AUW in any period of patient’s life, recruitment to the ALC group, sinus rhythm at the time of examination. In addition, informed consent had to be given for the study and follow-up.

The CG was formed by patients without symptoms or coronary artery disease, diabetes or uncontrolled hypertension or any cardiomyopathies or valve diseases. All patients denied regular alcohol consumption: sporadic consumption ≤2 AU per week was allowed and reported by three subjects.

Data analysis was performed with MedCalc version 12.7.0.0 (MedCalc Software Ltd, Ostend, Belgium) and Excel version 14.0.7237 (Redmond, WA, USA). Variables were classified as normally or non-normally distributed with the D’Agostino-Pearson test. Quantitative variables with a normal distribution were presented as means and standard deviations (SD), and those with a non-normal distribution as medians and interquartile ranges (IQR). The results for categorical variables are presented as percentages. Qualitative data was compared using the chi-square test and the Fisher’s exact test. Quantitative variables were compared using the Student’s t-test for normal distributions, or the Mann-Whitney test for non-normal distributions. The correlation coefficient was calculated as the Pearson’s or Spearman’s coefficient for normal and non-normal distribution respectively. The combined endpoint was defined as cardiac-related hospitalization, i.e., heart failure (HF) exacerbation, myocardial infarction or ischemia or arrhythmias, or cardiac death. Survival data was analyzed with the Kaplan-Meier method and displayed as the Kaplan-Meier curve. Exact Binomial Confidence Intervals for the Area Under the Curves (AUC) in ROC analysis were calculated and, in the next step, AUC comparison was performed by DeLong method.

The mean (SD) time of alcohol consumption declared by patients was 16 (9) years. The median (IQR) time between the last alcohol ingestion and echocardiography examination, i.e., free time (FT), was 10 (7–21) days. The most popular type of drink was vodka, as well as other forms of distilled alcohol, with 26% of patients reported drinking it as a solo beverage and 87% with another type of alcoholic drink, such as beer or wine. The mean (SD) MAST score was 25 (10), which indicated a high level of alcohol addiction in the studied group.

The prevalence of arterial hypertension was similar between the groups, although more intensive hypertension therapy was observed in ALC. In addition, smoking was more prevalent in the ALC group (51%) than the CG group (6%) (P = 0.002; Table 1). 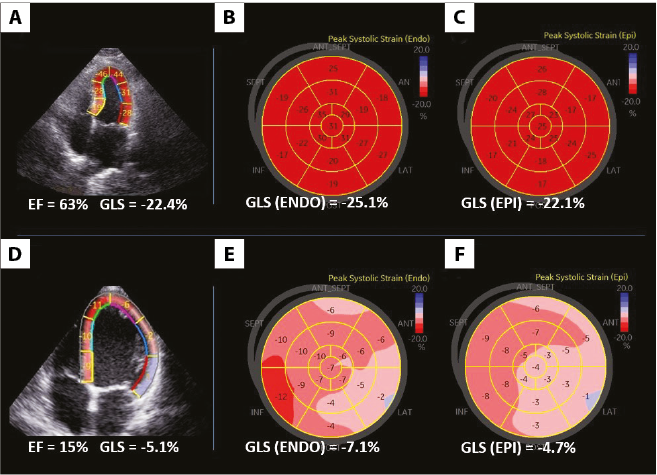 Follow-up by direct contact with the patient was achieved in 47 participants (72%) and life status (dead/alive) was confirmed in all. During follow-up, which lasted for mean 28 (16) months, 11 patients reached the combined endpoint. Ten hospitalizations were recorded and assessed as HF exacerbation, according to the patients’ reports. In eight cases, hospitalization was related to peripheral edema and dyspnea and in two cases to symptomatic arrhythmias. Death was reported by the patient’s relatives as of cardiac origin.

A comparison between outcome-free patients and the group with combined endpoint found the group with worse prognosis to have significantly higher NT-proBNP, as well as lower EF and lower absolute values for all strain parameters (Table 4).

Table 4. The comparison of chosen parameters between groups with and without combined endpoint

Daily alcohol consumption greater than 80 g of pure alcohol (equal >56 AUW) for ≥5 years has been associated with the development of alcohol cardiomyopathy [2, 3, 11]. However, our findings also indicate systolic and diastolic dysfunction in the ALC group, who were consuming slightly above half the dose of alcohol, i.e., 30 AUW (12–51), but over a longer mean period of time, i.e. — mean (SD) 16 years (9). In our ALC group, 89% of patients reported symptoms corresponding to New York Heart Association (NYHA) ≥I class. This clinical presentation may be partially related to liver disease or malnutrition caused by alcohol abuse [12].

LV function can be more precisely evaluated in different clinical settings, e.g., in ischemia detection, by including deformation parameters [13]. Layer-specific strain was found to be a marker of cardiac muscle dysfunction associated with arterial hypertension and LV hypertrophy [14, 15]. Similarly, absolute GLS values have been found to be lower in toxic cardiomyopathies [16–20].

In the present study, median (IQR) GLSendo absolute values were 19% (12%–23%) in ALC vs 24% (21%–27%) in CG (P = 0.007), and absolute GLSepi was 14% (9%–18%) vs 19% (16%–20%) (P = 0.007). The presence of a better-preserved layer strain in our ALC group might be partly related to the relatively higher implementation of hypertension therapy. This may exert a protective effect on LV function: mean (SD) EF was found to increase from 34% (8%) to 39% (8%) (P <0.001) during six months of observation in HF patients with spironolactone added to the therapy [21]. The literature concerning the layer-specific strain associated with chronic alcohol exposure is rather sparse, and it is difficult to obtain accurate information about alcoholism severity, often due to under-rated self-reported alcohol consumption [22]. Nevertheless, in a study of 199 healthy patients, mean age 44 (5) years, 71% males, in the acute phase of alcohol toxicity, the mean (SD) alcohol level in blood sample six hours after alcohol ingestion was 1.2 (0.3) g/L. The mean (SD) GLSendo during alcohol exposure was 27% (4%), significantly lower than the value taken after four weeks of strict alcohol abstinence, i.e. 33% (3%) (P = 0.002). Blood pressure, EF, heart rate, and other classical echocardiographic parameters did not show any difference between the two examinations [23].

Deformation parameters have demonstrated diagnostic and prognostic utility in a wide range of cardiac and non-cardiac conditions, such as ischemic heart disease [13], aortic stenosis [24], diabetes type 2 [25], acute hyperglycemia [26] or pre-eclampsia [27]. Both GLS and layer-specific strains (GLSendo, GLSepi) have been found to have predictive significance for adverse outcomes following acute coronary syndrome [28]. Skaarup et al. [28] observed that global longitudinal strain is independently associated with the combined outcome (HF or cardiovascular symptom development) for lowered GLSendo (HR, 1.19 [1.10–1.28]; P <0.001) and GLSepi (HR, 1.26 [1.15–1.39]; P <0.001). In our study, univariate analysis found elevated NT-proBNP >2058 pg/ml decreased EF ≤26% and longitudinal strain (GLS <18%; GLSepi <15.1%; GLSendo <19%) were related to a worse prognosis in the ALC group. Logistic regression analysis found that all tested parameters similarly discerned the outcomes which were not significantly improved in models based on two or three variables; this was probably due to the insufficient number of observed endpoints.

The study does have some limitations. The main one is that it only includes a relatively small number of examined patients. This is partially related to the difficulties of cooperating with addicted people and lower compliance in direct follow-up. However, the study also places an emphasis on 2D longitudinal strain and LV assessment. Further information could be gathered by including information gathered by 3D strain variables, rotation and torsion analysis, as well as deformation of right ventricle. In addition, it is difficult to objectively quantify self-reported alcohol doses, which may be underrated. Furthermore, the duration of the follow-up was relatively short, and only a limited number of combined endpoints were used, with cardiac origin established only by phone interview. Finally, differences in hypertension treatment were used between groups; this could influence cardiac function and prognosis outcomes, potentially improving natural history of HF in the affected group.

Regarding myocardial deformation, GLS and layer strain showed lower absolute values in alcohol overusers as compared to controls; both were associated with a more frequent occurrence of combined endpoint: a higher clinical risk of death or cardiovascular hospitalization for GLSendo <19% and GLSepi <15%. Nevertheless, similarly to volumetric assessment of atrium (LAVI), quantitative assessment of deformation (GLS, GLSendo and GLSepi) did not add any significant predictive value to models based on EF and NT-proBNP.

Moreover, the duration of abstinence from the last drinking episode correlated positively with the absolute value of longitudinal strain; this indicates the value of quantitative strain data for assessing functional recovery based on abstinence and pharmacological treatment.