Referring to the discussion on effective methods of treatment for patients with a post-infarction left ventricular aneurysm and a ventricular septal defect (VSD) [1], we present the case of a 57-year-old man with hypertension, chronic renal failure, and Crohn’s disease who was admitted to the cardiac surgery department due to cardiogenic shock in the course of acute ST-segment elevation myocardial infarction of the anterior wall, complicated by rupture of the interventricular septum (IVS) and large left ventricular aneurysm within the apex. In the patient’s history, an acute cardiac pain occurred six days before hospitalization in the department of cardiology. Coronary angiography revealed the left anterior descending artery with a very narrow 8th segment and a significantly stenosed marginal artery treated with one drug-eluting stent implantation. Transthoracic echocardiography showed akinesis with the thinning of apical segments of the left ventricle (LV) walls and the mid-anterior part of IVS (Figure 1A), dyskinesis of the apex and hyperkinesis of hypertrophied basal segments. LV ejection fraction was approximately 36%. In the apical segment of the IVS a 5 mm VSD with the left-right shunt was exposed (Figure 1B). The patient was qualified for a delayed surgical treatment after day 12 with femoral veno-arterial extracorporeal membrane oxygenation (VA-ECMO), instituted 8 hours after admission, as well as CRRT (renal failure, metabolic acidosis). He was extubated next morning. His hemodynamic and metabolic status improved in the next few days. On day 19 after the first symptoms of myocardial infarction, in a stable patient’s condition, LV repair and VSD closure were performed using 2 goretex patches (Figure 1C). VA-ECMO was continued for the next 4 days. In the early postoperative phase, the patient required bedside dialysis and inotropic support. On day 3, levosimendan was administered. Two weeks after the surgery, the patient was discharged home in a good general condition. Almost 3 months after the surgery, a follow-up transthoracic echocardiography revealed no shunt between ventricles (Figure 1D) and showed an improved LV shape (Figure 1E–F). The LV end-diastolic volume was 180 ml, SV 60 ml and EF 35%. 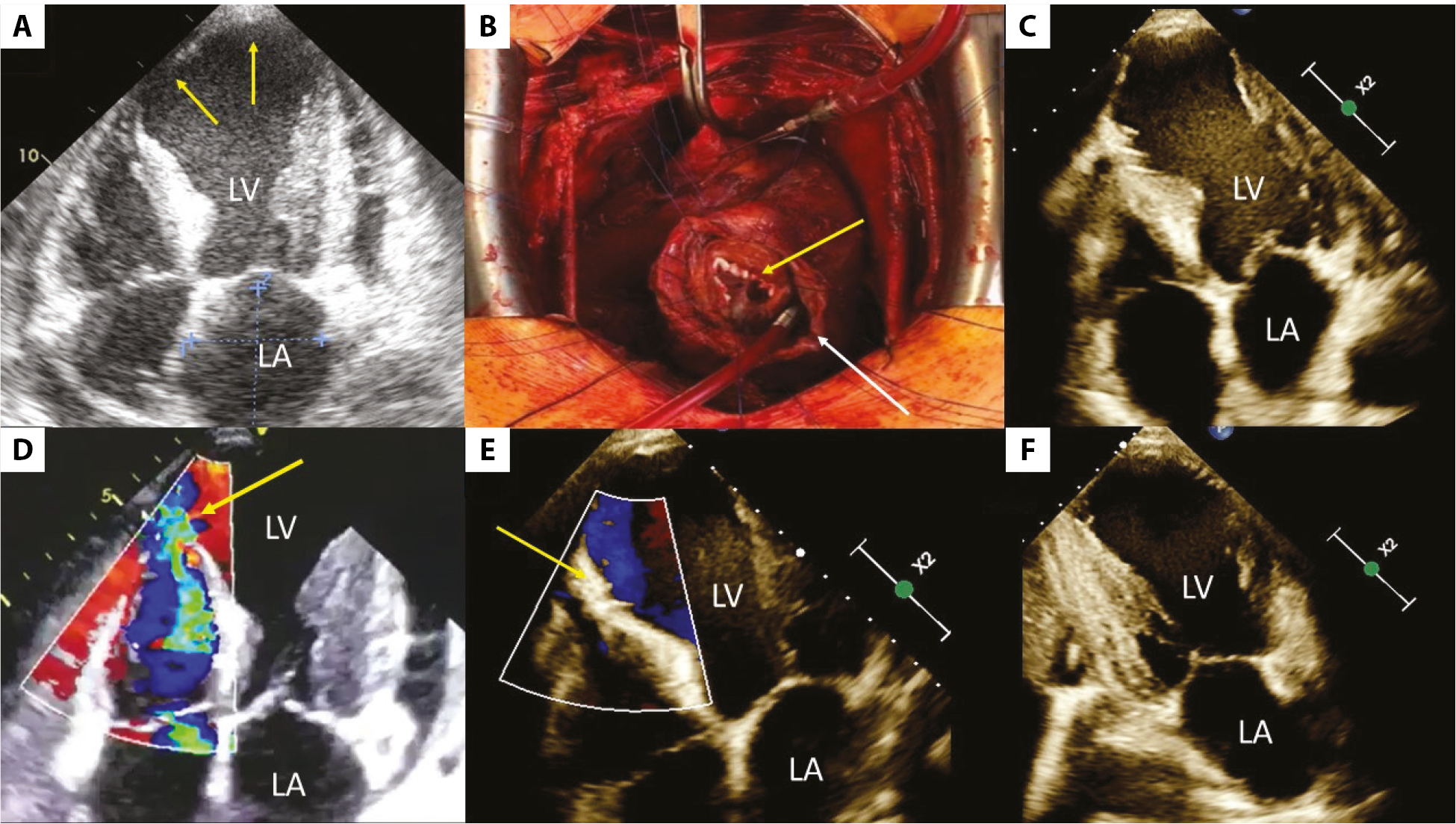 VSD of the apical IVS segment develops typically in the course of a transmural anterior infarction, frequently in the absence of reperfusion therapy or delayed reperfusion [2, 3]. Surgery is an effective method of treatment, but with a high risk of complications, often due to the patient’s hemodynamic instability and post-infarction fragility of tissues associated with increased activity of metalloproteinases and myocardial remodeling. Reports of recent years have drawn attention to the role of a delayed surgical treatment with the use of mechanical circulatory support devices [4]. Temporary VA-ECMO support may significantly contribute to the achievement of good therapeutic results by stabilizing the patient, maintaining adequate tissue oxygenation [4], obtaining time for myocardial remodeling, and elimination of the effect of antiplatelet therapy and further therapeutic decisions [5]. In patients without cardiogenic shock ECMO should be considered individually in order to unload the ventricles and prevent hemodynamic deterioration (large VSDs and impending deterioration, severe RV infarction, progressive dilatation of cardiac chambers).