The main concerns of staged treatment of single ventricle type congenital heart defects are low pulmonary artery (PA) resistance, adequate pulmonary microvasculature maturation, and the pulmonary arteries’ growth [1]. Unfortunately, after initial palliative procedures some patients do not meet the criteria for successful Glenn or hemi-Fontan surgery and eventual Fontan completion, which is the treatment goal. Low energy non-pulsatile blood flow through the cavo-pulmonary connection significantly increases pulmonary resistance over that seen in pulsatile flow. It can cause preoperative underestimation of postoperative pulmonary resistance in borderline cases, leading to profound hypoxia and circulatory failure immediately after the Glenn procedure. In the long-term prognosis, non-pulsatile flow can contribute to the underdevelopment of pulmonary arteries and thromboembolic issues. Elimination of the hepatic bloodstream through the lungs contributes to developing pulmonary arteriovenous malformations and severe hypoxia [2, 3]. Lack of optimal preoperative risk stratification may extend the ultimate decision on the intraoperative period. Patients approaching borderline criteria are frequently disqualified from surgery. We present a group of high-risk borderline patients with hypoxia, increased pulmonary resistance, and marginal-sized pulmonary arteries in whom the lungs accessory blood flow was established and precisely adjusted during the Glenn procedure. The group of patients with pulsatile Glenn (BDGS) is compared to patients with classic bidirectional Glenn anastomosis (BDG) as preparation for Fontan surgery. Although the concept has been known for decades, there is no evidence-based ground for routine leaving an additional pulmonary blood flow at Glenn surgery in all patients. The advantages and disadvantages of the modification are still debated, and the exact role of the procedure unknown [4–7].

The study involved patients with single ventricle physiology who underwent the Glenn procedure at the Department of Pediatric Cardiac Surgery, Jagiellonian University, between 2008 and 2019. Jagiellonian University Ethics Committee approved the project, and the informed consent for the study was obtained from the patients’ parents.

The BDG and BDGS groups were identified and compared (Table 1, Table 2).

Table 1. Procedures carried out in patients with single ventricle physiology in the 12 years. The numbers in brackets indicate patients who died

All surgeries were carried out using the previously described technique and methodology. During surgery, the superior vena cava was anastomosed to the PA in the end–to–side manner. All accessory sources of pulmonary blood flow were closed (including tightening of the native PA, if present) (Figure 1). 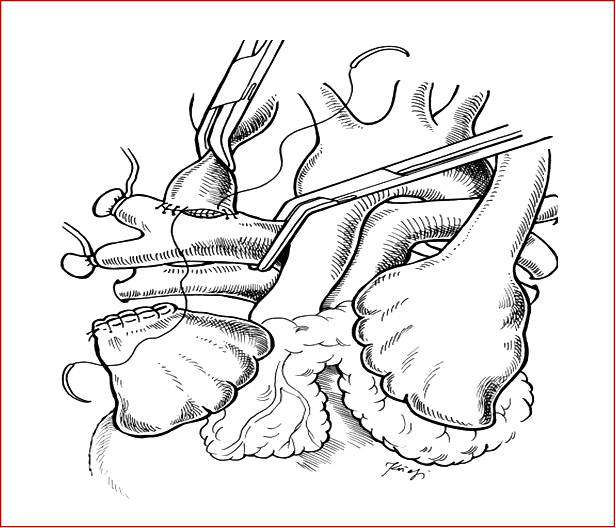 Figure 1. The surgical technique of creating a bidirectional Glenn shunt. The superior vena cava is cut of the right atrium and anastomosed to the pulmonary artery in the end to side

An additional pulmonary blood flow source was created based on preoperative data, size of pulmonary arteries, and lung disease history. In patients in whom preoperative pulmonary resistance was higher (above 1.8 WU/m2), a mean PA pressure elevated (13–15 mm Hg), or pulmonary arteries small-sized (z score –1.5 to –1.8), and/or there was no possibility of weaning from cardiopulmonary bypass (CPB) because of hypoxia (e.g., blood oxygen saturation below 70%, despite 20 ppm of nitric oxide and FiO2 1.0, appropriate pharmacologic support with catecholamines and milrinone), either a 3.5 Blalock–Taussig shunt (BTS) was created or a native pulmonary outflow tract was adjusted. The invasive measurement of the pressure in PA was done and, based on the measurements, the BTS was narrowed at the pulmonary end with a vascular clip (to the diameter of approximately 3 mm), or the native outflow tract was banded to a diameter of approximately 3 mm (Figure 2) to maintain mean PA pressure below 15 mm Hg by FiO2 0.7, ETCO2 35–40, hemoglobin level 13–14 g/dl, and systemic oxygen saturation 75%–85%. The Fontan procedure was performed before 4 years of age. The total cavopulmonary connection was completed using an extracardiac or intra-extracardiac conduit with fenestration. Any residual accessory pulmonary blood flow source was eliminated at the time of Fontan surgery. 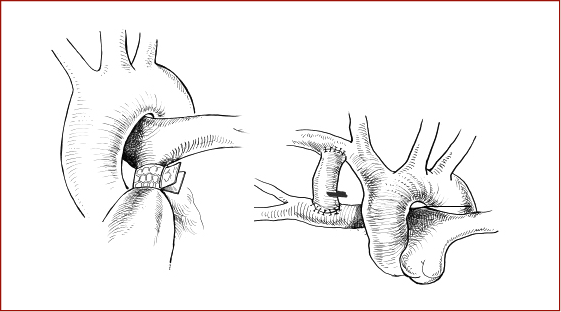 Figure 2. The technique of creation of additional pulmonary blood flow source. A. Pulmonary artery banding by narrowing of a distal portion of the pulmonary trunk with polytetrafluoroethylene (PTFE) band. B. Modified Blalock–Taussig shunt (diameter of 3.5–3.0 mm) with narrowing of distal part with vascular clip to 3.0 mm

Bidirectional Glenn anastomosis was carried out in 99 patients. In 21 (21.3%) of them, an accessory pulsatile shunt was created (the BDGS group) (Table 1). One (4.7%) patient in the BDGS group died after the procedure because of sepsis. In 78 patients the only pulmonary blood flow source was Glenn anastomosis (the BDG group). Four (5.1%) patients died in the BDG group. Two of them died because of thromboembolic complications and neurologic damage. One child died of sepsis, and one because of the single ventricle’s severe dysfunction. There was no difference in the mortality rate between groups (P = 0.71).

Table 3. Comparison of data concerning clinical and laboratory characteristics of the patients in the investigated period

The bidirectional Glenn shunt or hemi-Fontan anastomosis are well-established, integral steps in a single ventricle treatment strategy. As a second step, these procedures are preceded by neonatal palliations such as Norwood surgery, PA banding, or systemic-to-PA shunt. Both stages aim to optimize the circulatory system for the third step, the Fontan procedure. After several decades of developing such a strategy, 2 of the initial 10 [11] necessary conditions of successful creation of Fontan circulation remained: the good functioning single ventricle and well-developed pulmonary arteries. These are the main goals of the initial stages of treatment. They ensure volume unloading, stepwise remodeling of the single ventricle, and PA development [12, 13]. Unfortunately, a group of patients in whom the criteria of creating cavo-pulmonary anastomosis are borderline imposes significantly increased risk on the second-stage procedure. Lack of perfect preoperative risk stratification causes disqualification of many of them from further treatment. In the present study, we looked at the borderline cavo-pulmonary anastomosis candidates in whom an additional blood flow source was created during surgery. The pulsatile shunt’s influence on early and late postoperative results was shown compared to patients with classic BDG.

The population of single ventricle patients with hemodynamics not necessarily suited for creating Fontan circulation is growing. The elevated PA pressure and resistance, small PA branches, accessory vascular or lung defects, chronic lung disease, or single ventricle dysfunction may contribute to intolerance of Fontan physiology [11, 14]. Regrettably, there is no good alternative for such patients. Following neonatal palliative procedures, our approach was not to disqualify borderline patients, however, at the expense of higher perioperative risk. After weaning from CPB, all patients in the BDGS group experienced severe desaturation, despite appropriate pharmacological support. The alternative was to start extracorporeal membrane oxygenation support without a realistic perspective for a successful outcome. The ultimate decision to create an accessory pulsatile shunt was reached intraoperatively. Such an approach ensured a stable, reasonably safe clinical conditions with optimal systemic oxygen saturation and ventricular function. It also created additional possibility of long-term palliation if Fontan completion would be contraindicated [15].

The pulsatile shunt was constructed under the precise invasive pressure measurement within the cavo-pulmonary connection, putting accessory banding on the native pulmonary trunk or a vascular clip on the distal end of the BTS. Such a narrowing can significantly reduce pressure transition to the superior vena cava (SVC) and cause the “ejector pump effect”. This approach was based on experimental hemodynamic studies and computational simulations indicating that optimal conditions were reached with the clipped distal shunt, anastomosed to the SVC. This model provided evidence that the energy of the systemic ﬂow is partly transferred to the SVC ﬂow and that it works as the ejector pump. It can increase pulmonary flow without significantly increasing SVC pressure [16, 17].

The reported mortality and morbidity in patients with BDGS differ in previous reports. A higher mortality rate in comparison to classic BDG was reported [18, 19]. In our group of higher-risk patients, only one patient died in the postoperative period because of sepsis, and the mortality rate did not differ between groups. Also, respiratory support time, intensive care time, and hospitalization time were not significantly different. The chylothorax frequency was higher in the BDGS group, although not significantly. Additionally, in the BDGS group, the systemic blood oxygen saturation was significantly higher than in the BDG group, which seems to be the most crucial benefit for patients’ quality of life and physical efficiency.

Although there was no difference in the McGoon ratio before the second stage and before the third stage (P = 0.91, Table 3), there was a significant difference in the change (Δ) of the McGoon ratio with a substantial increment in the BDGS group (P = 0.002). The pulmonary branches’ diameter, expressed as the McGoon ratio, is an important risk factor of creating Fontan circulation [20]. Although the time between the first and second stage coincides with intensive PA growth, classical Glenn physiology with a non-pulsatile blood flow through the lungs can profoundly affect PA development. In our material, it ensured significantly better development of pulmonary arteries. It contradicted previous studies that revealed the absence of development or even regression of PA indices [21–23]. In most published works, the comparison between matched groups (classic Glenn anastomosis vs assisted Glenn shunt) and case-control studies, the comparison of absolute diameters, z-scores, and PA indices between groups were unable to reveal the increase of their size. In our study, the paired comparison of the McGoon index’s mean values within matched groups between the surgical treatment stages also did not reveal significant differences. However, the comparison of the mean inside group increments (the mean Δ, the mean change) of the McGoon index between matched groups showed a significantly higher increment in the assisted Glenn (BDGS) group between the second and the third stage of treatment. A pulsatile flow in the vascular bed is a well-known factor influencing vascular development by appropriate shear stress regulation, the release of endothelium-derived factors (nitric oxide, endothelin), and reducing vascular resistance [24]. The additional advantage of such an approach is perfusion of the lungs supplied with blood containing angiogenesis inhibitors of the liver (e.g., endostatin, angiostatin), which were shown to regulate normal development and prevent the formation of arteriovenous fistulas [25–27].

Our data show higher blood oxygen saturation after BDGS than following the BDG (P = 0.03). It is related to slightly increased pulmonary blood flow, increased PA pressure, and increased ventricle volume load [28]. Before the second stage surgery, the PA resistance and pressure were higher in the BDGS group (Table 3). However, there was no difference in PA pressure and PA resistance in pre-Fontan catheterization. At the same time, the oxygen saturation and increase in the McGoon ratio were significantly higher in the BDGS group. The ventricular function and atrioventricular valve performance were comparable in both groups (Table 4). Given that the BDGS group contained borderline candidates for Glenn surgery, the results indicate a positive influence of pulsatile blood flow on central pulmonary arteries development in these high-risk patients by maintained atrioventricular valve and ventricle function.