A case of severe stinging caused by venomous marine animal, “Portuguese man of war” (Physalia species) in all probability

There are about 150 million jellyfish stings every year. “Portuguese man of war” is responsible for substantial proportion of stings worldwide. The biggest risk from a jellyfish stings may come from incorrect management. A 42-year-old woman was severely stung by venomous marine animal while bathing in waters of the Thai Gulf. It was most likely “Portuguese man of war”. The patient didn’t remember while being rescued. Looking at damages it seems that first aid was incorrect. Inappropriate and delayed management caused disfiguring scars. On the ground of this case, first aid for ”Portuguese man of war” stings is reminded.

Snorkelling, scuba diving, swimming, or bathing in warm sea/ocean waters are the greatest attractions of summer holidays. However, there is danger of meeting venomous marine animals, which have worldwide geographic distribution but they are more plentiful in waters of tropical and subtropical zones. It is estimated that more than 150 million people worldwide come into contact with jellyfish that cause symptoms and that at least 200 die as a result each year [1–4]. “Portuguese man of war” has widespread distribution. It may be found in Indo-Pacific areas, the Indian Ocean, the South and North Atlantic, and European coasts [1, 5, 6]. “Portuguese man of war” is not really a jellyfish at all, but an animal that looks like a jellyfish. It is a floating colonial siphonophore. It has pneumatophore (balloon-like float) 2–25 cm long, with dangle tentacles measuring from 10 m up to 50 m. “Portuguese man of war” is also called a Bluebottle, or Man o’ War [1, 7–9]. The colony is a carnivore. Using its venomous tentacles, a Bluebottle traps and paralyses its prey. It feeds mainly on small fish, shrimps, other crustaceans, and small marine organisms in the plankton. Up to 90% of the prey is fish. Clinical picture of ”Portuguese man of war” stings is characterised by painful red lesions running along the side of tentacle contact. The lesions may become filled with fluid. Some severe skin injures become necrotic within 24 h if first aid is delayed and incorrect [1, 5, 6].

A 42-year-old woman spent her holiday by the Gulf of Thailand, which is part of South-Chinese Sea. She was severely stung by venomous marine animal while bathing approximately 50 m from the beach. It was most probably “Portuguese man of war”. The woman reported that she had felt sudden burning pain in her left leg and right arm. She didn’t remember how she found herself on the shore. The injured areas involved: left thigh, popliteal area and right wrist, forearm, arm and shoulder. Anamnesis revealed that initial injures (bright-red skin changes with single vesicles) turned black. Indurated swelling appeared which made the knee joint stiff (Fig. 1). Figure 1. 42-year-old woman. On the day of admission, 3 days after stinging 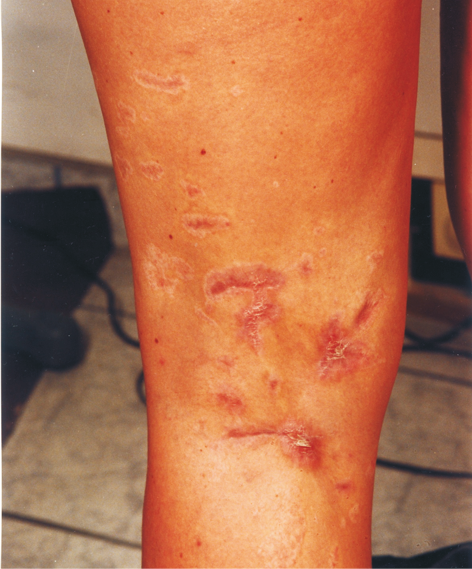 The woman has been complaining of hyperaesthesia and paraesthesia of affected skin up to 5 months. Muscular contracture and hard swelling remained for over 2 months. Very weak reaction to antihistamines and glucocorticoids given both intravenously and intramuscularly was observed. The scars in popliteal area significantly limited the movement of the knee. The above required long term rehabilitation. At present, swelling of the left leg occurs after intensive walking, usually at the end of the day.

The patient didn’t remember while being rescued. We don’t know what first aid was given. We have no medical records from Thailand. Our treatment was administered too late, 3 days after stinging, just after returning to Poland. Looking at damages it seems that first aid was inappropriate. Improper and delayed management caused disfiguring scars.

Universally effective and safe first aid measures for the treatment of jellyfish and Physalia spp. stings are not available [10]. Inappropriate first aid worsens the sting from what it would normally be. That’s why it is important to remind proper action in the event “Portuguese man of war” stings.

At first, you have to get out of the water. It’s easier to deal with the sting. Treatment of ”Portuguese man of war” stings should be intended to: alleviating the pain of the sting, alleviating the local effects of venom, preventing further discharge of unfired nematocysts remaining on the skin, controlling systemic reaction including shock. The most effective treatment to alleviate the pain is tentacle removal, followed by hot water application on the stung skin area [1, 9, 11]. Lift adherent tentacles off the skin and remove them, using a stick, gloved fingers, towel, pincet, shell, credit card, knife, or disposable safety razor. Rinse the affected area with sea water. The hot sea water is the best. Optionally, the affected areas could be dipped in hot (45°C) sea water for 20 min [8]. If you don’t have hot sea water, use any warmed object. Topical treatment with 1% lidocaine is beneficial and recommended. Lidocaine appears to provide relief from jellyfish and ”Portuguese man of war” stings by acting both as an anaesthetic and by preventing further discharge of nematocysts from tentacles which remain on the skin [1, 3, 9, 12, 13]. Ice packs are also effective painkiller [1, 11]. Paracetamol (acetaminophen), acetylsalicylic acid (aspirin), or ibuprofen should also be used to relieve pain. Antihistamines may help limit an allergic response to the sting. Hydrocortisone could help reduce inflammation. In some severe cases a life-threatening allergic reaction may occur. People, who are allergic to insect stinging, especially to bees and wasps stings may experience a dangerous allergic reaction to a “Portuguese man of war” stinging. Severe muscle cramping, breathing difficulty, nausea, vomiting, running nose, dizziness, and impaired consciousness (confusion, drowsiness) indicates allergic systemic reaction. It requires prompt professional medical attention. Only supportive care is indicated for severe systemic reaction, because no antivenom is available [1, 5, 6, 14].

What not to do

Alcohol (ethanol), methylated spirit, baking soda, diluted ammonia, vinegar (4–6% acetic acid), boric acid, lime juice, urine, and fresh water should be carefully avoided, since they could massively discharge nematocysts. Do not scrub the affected area. Rubbing the wound with bare hands or wet sand is forbidden. Secondary stinging by touching swimwear should be avoided. Detached tentacles can sting and release venom for several weeks. It’s worth reminding that tentacles on beaches are still capable of stinging if handled [1, 3, 9, 12, 13].

The “Portuguese man of war” is often confused with jellyfish, which may lead to inappropriate treatment of stings, as the venom differs from that of true jellyfish. Unfortunately, in most cases the stinging species is unknown, can be only suspected. It makes correct management difficult. For example, in case of Chironex fleckeri (sea wasp) stinging, pouring vinegar over jellyfish tentacles is recommended. On the contrary, using vinegar is forbidden for treating “Portuguese man of war” stinging [10, 13].

”Stinger suits” should be used. They are made from spandex or Lycra and provide little thermal protection, but do protect the skin from “Portuguese man of war” stings, jellyfish stings, abrasion and sunburn [1, 10, 14].

Proper and prompt first aid for jellyfish or “Portuguese man of war” stings can limit damages significantly and prevent irreversible sequelae. If management is inappropriate and delayed, disfiguring scars may develop. Complications could also have aesthetic and psychological implications. It should be reminded that the most likely to be affected by venomous marine animals are recreational divers without diving suit. Swimmers, scuba divers, surfers, people who love snorkelling should wear protective equipment in risky areas [1, 10, 13, 14].