Background: Repatriation represents a serious outcome of illness or injury among seafarers at sea. The aim of this study was to describe repatriation patterns due to injury and illness in a seafarer cohort, and determine risk factors for repatriation.

Materials and methods: The study analysed a telemedicine database of 3,921 seafarer injury and illness cases over a 4 year period using descriptive statistics and logistic regression.

Results: There were 61 repatriations over the study period (1.6% of cases). Most repatriations were due to illness (38; 62.3%) as opposed to injury (23; 37.7%). Back injuries and gastrointestinal illness were the most frequent causes of repatriations. Using logistic regression, nationality was identified as a significant risk factor for repatriation.

Conclusions: This study emphasizes illness as a major cause of seafarer repatriation, and suggests opportunities for future studies to identify potentially modifiable risk factors.

Seafarers are an essential workforce, responsible for 90% of global commerce [1]; there are approximately 1.4 million seafarers worldwide [2, 3]. By the nature of their occupation, working seafarers are frequently isolated from professional medical care. For seafarers injured or ill at sea, medical care is administered by the ship’s medical officer, a crewmember with mainly non-medical duties and often minimal medical training. Although mandated to have a medical chest with certain recommended components, in practice, available medications and supplies may be limited. Crew size on merchant cargo vessels is approximately 20 seafarers per ship, with roughly equivalent numbers of deck and engine crew as well as 1 to 3 galley (food service) crew members. With ships frequently undermanned [4], lost work due to health problems may contribute to increased demands on other crew members [5]. This is particularly true if the injured or ill seafarer must be repatriated [6].

Repatriation is the process by which a seafarer is returned to his or her home country or an agreed-upon destination. A shipowner must repatriate a seafarer for several defined conditions aside from medical necessity, including at the end of a contract, following a shipwreck, when a shipowner does not meet contractual agreements, if a vessel is war zone-bound without a seafarer’s consent, and certain other limited conditions. Repatriating a seafarer includes all costs of transportation, food and lodging along the way, wages covering the time of travel, transportation of luggage, and related medical treatment until the seafarer is deemed fit for travel [7].

In considering the impact of medical repatriation, a repatriated seafarer suffers a serious illness or injury and additionally loses work as a consequence. Ship owners, responsible for their seafarer’s medical care [8], bear the high financial cost of the precipitant medical condition as well as indirect costs including evacuations (for example, by airlift or speedboat), diversions, and if needed, repatriations [7, 9]. It is estimated that seafarer medical conditions cost over $1 billion (760 million in 2013 Euro) to the shipping industry, mainly costs of evacuations and vessel diversions [10], often resulting in repatriation. Repatriation is therefore a significant endpoint representing severe injury or illness at sea, resulting in high costs of care (direct and indirect), and an important target for preventive efforts.

The data source was the database of Future Care, Inc., a company that manages the health of seafarers globally and provides telemedicine services. This company maintains records of medical illness and injury that occur on contracted ships at sea, with data collected and entered by telemedicine case managers. As in our previous study [13] we utilised data for merchant seafarers aged 18 to 80, during the 4 year period of 2008–2011, on merchant vessels. This study was approved by Yale Institutional Review Board.

Data variables included seafarer age, job, nationality, sex, case type (injury or illness), diagnostic information (injured body part, type of illness), work status, and repatriation status (repatriated/not repatriated). Seafarer jobs were classified by the worksite (deck, engine room, and galley) as well as rank (officers or ratings), to allow comparison with previous seafarer studies [12, 14, 15]. The injured body part and illness types as listed in the database were classified into more general categories by the authors. For example, injuries of the foot, knee, or hip were grouped into the injury site category of “lower extremity”. The overall distribution of specific injured body parts and illness types was determined. Frequency of illness and injury cases was stratified by age group, sex, nationality, worksite, rank, and repatriation status.

Fisher’s exact test was used to test for associations between categorial variables and repatriation status. The z-test for proportions was used to determine if proportions were significantly different [16]. Student’s t-test was used to compare means. Unadjusted as well as 2 adjusted logistic regression models (full and parsimonious) were used to model odds of repatriation after injury or illness events. The parsimonious model was developed by initially including all variables (age, sex, job, nationality, and all 2-way interaction terms). The parsimonious analysis used a backward elimination strategy, with a limit of p ≤ 0.05 for inclusion in the model. All data analyses were performed using SAS version 9.4 (Copyright SAS Institute Inc., Cary, NC, USA).

The study population included 3,921 seafarer cases of injury or illness at sea (Table 1).

Table 1. Baseline characteristics of seafarer population with injury or illness at sea and repatriation status

The distributions of types of injuries and illnesses for the seafarers and the repatriated subpopulation are shown (Figs. 1, 2). 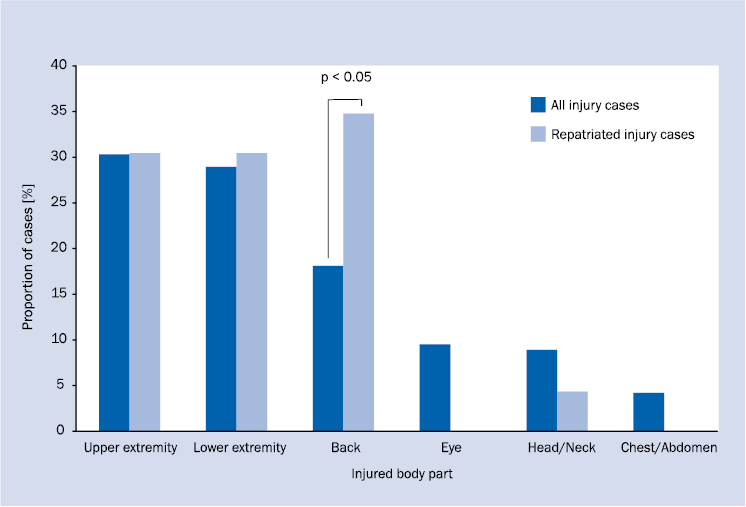 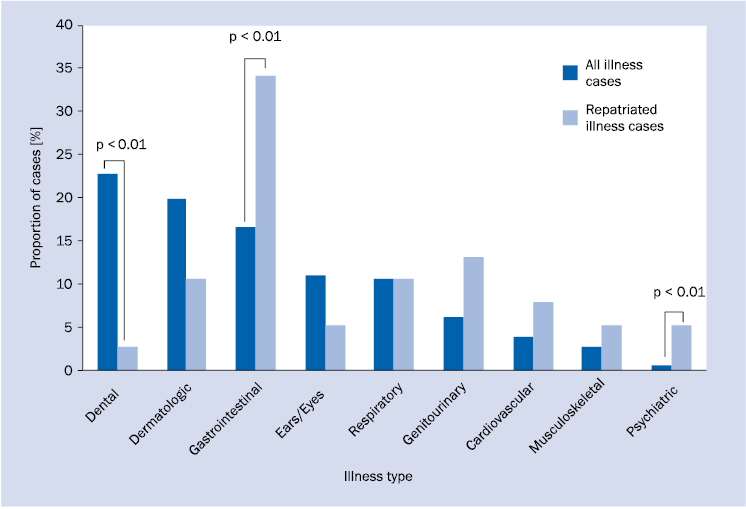 Logistic regression modelling was used to identify potential risk factors for repatriation due to medical illness or injury (Table 2).

In final analysis, the demographic variable sex was not included in the model due to low numbers among women (only 1 female seafarer repatriated). Both the unadjusted and the parsimonious model adjusted for age, nationality, worksite, rank, and 2-way interaction terms revealed only nationality as a significant risk factor for repatriation, with Indians more likely to be repatriated compared to Filipino seafarers (OR 2.57, 95% CI 1.13–5.83 and OR 2.61, 95% CI 1.11–6.11, respectively). Of note, the proportion of female seafarers repatriated (1/77; 1.3%) as compared to male repatriations (60/3,844; 1.6%) was not significantly different (p = 0.86).

This study examines injuries and illness in a seafarer cohort, including the distribution of diagnoses in repatriated cases, as well as risk factors for repatriation. Of note, gastrointestinal illness and back injuries were disproportionally elevated among repatriated seafarers, and Indian seafarers were more likely to be repatriated than Filipinos. There are few comparable studies.

Back injuries and injuries to the extremities were the dominant injuries in both repatriated and non-repatriated seafarers. However, back injuries were significantly more frequent in repatriated seafarers, suggesting that back injuries at sea may be more severe and debilitating than injuries to other body parts. Regarding illnesses, gastrointestinal, genitourinary, cardiovascular, and psychiatric complaints have been found to be significant contributors of seafarer repatriation in limited prior studies [6, 11, 12], and were similarly represented in our cohort. Our study further identified dermatologic and respiratory conditions as significant contributors to repatriation, although there were overall low numbers of cases and specific diagnoses were not available.

Gastrointestinal illness was the most significant contributor to repatriation due to illness. Although specific diagnoses were unavailable, this illness category may have included surgical problems such as appendicitis and hernias, conditions frequently observed in prior studies [12, 17]. Dental conditions were the most common illness reported, yet resulted in repatriations only infrequently. Conversely, psychiatric complaints were reported relatively infrequently compared to other conditions, but resulted in repatriations much more frequently.

While the aging seafarer workforce remains of increasing concern [3], our data did not find a significant effect of age on repatriation. Also of note, seafarer rank and worksite were not found to be significant risk factors for repatriation. However, there was a statistically significant difference in repatriation rates by nationality, with Indians having a higher rate of repatriations compared to Filipinos (Table 1). Logistic regression modelling similarly determined nationality as the only significant risk factor for repatriation among seafarers with medical events, with Indians more than twice as likely to be repatriated compared to Filipino seafarers (Table 2). Recent studies [18, 19] have found that Filipinos seafarers reported fewer accidents at sea compared to other nationalities. Of note, one large study of cruise ship workers found fewer Filipino disembarked for medical treatments compared to other nationalities, and noted potential differences in work assignments by nationalities as well [20]. While the threshold for a crewmember to leave a cruise ship with on-board physicians and medical facilities would likely be higher than on merchant vessels (without doctors or significant medical equipment), our study demonstrated a similar protective effect of Filipino nationality. Although our data did not demonstrate significantly less reported injuries among Filipinos, Filipinos were significantly less likely to be repatriated compared to Indian seafarers. However, differential reporting bias by nationality could potentially underlie this result if Indians did not report less serious injuries, while Filipinos more often reported less serious injuries.

This study has several important strengths. The large dataset with high numbers of injury and illness cases was likely representative of the typical illnesses and injuries among seafarers at sea. Although the total number of repatriations was small, few studies report such data. Unlike other studies, a significant strength of this study is the demographic and occupational variables available on the cases, allowing for analysis of repatriation rates and risk factors. To the authors’ knowledge, no similar analysis has been previously reported.

A major weakness remains the small number of repatriations in the dataset, likely a significant factor limiting detection of other potentially important risk factors for repatriation. In addition, without baseline medical information, risk for repatriation due to pre-existing medical conditions could not be determined. Although we had data on age, sex, worksite, and rank of seafarer cases, we did not have data on pre-existing medical conditions, medications, work experience, vessel characteristics, and other factors that may potentially impact the risk of repatriation. Finally, although the analysis identified a significant difference in repatriation risk between Indian and Filipino seafarers, it is possible that a difference between other nationalities exists but was not detected due to low numbers of other nationalities in the database. However, as Filipino and Indian seafarers comprise a significant proportion of the current seafarer population [21], this finding should be further elucidated in future studies.

In summary, the data present several finding of note. Analysis of types of illness and injury in repatriated cases indicates back injuries and gastrointestinal illness are major causes of repatriation in seafarers, confirming findings in limited prior studies. Our study also provides important new insights, as nationality was identified as a significant risk factor for medical repatriation in seafarers, with Indians more likely than Filipinos to be repatriated. However, the basis of this finding could not be determined with the study data. It is possible that baseline characteristics of the seafarers (medical, socioeconomic, job training or skill), pre-employment screening criteria, cultural differences, or other factors (reporting bias, data limitations) underlie this significant finding. Importantly, this study identifies the need for additional, larger research studies towards identifying potentially modifiable risk factors for seafarer illness and injury at sea, thereby informing seafarer wellness initiatives and helping determine criteria for evidence-based medical fitness standards, for which there is great need [22]. Scovill et al. [23] found a high prevalence of cardiovascular risk factors in a small study (n = 388) of United States inland waterway captains and pilots, demonstrating an important opportunity for risk-factor modification in a subset of seafarers that may translate to substantial cost-savings via reduced medical expenses and repatriations. If risk factors for other dominant types of illness and injury could be identified and mitigated in seafarers, then seafarer injury and illness at sea, and the subsequent need for repatriation, may be significantly reduced.

This study was funded in part by Future Care, Inc.