Consumption of addictive substances in mariners

Background: For many years, studies have confirmed that there is a high prevalence of addiction amongst seafarers. The effect of this is even more serious when one considers their isolated and even hostile living environment presenting risks which require vigilance and rapid reactions. The purpose of this article is to determine the extent of knowledge about addiction among seafarers.

Materials and methods: This is a review of the literature between 1993 and 2013 with respect to the prevalence of consumption of alcohol, tobacco, cannabis, cocaine, heroin, and other drugs amongst seafarers. Total prevalence was calculated using the virtual population represented by the subjects of each article, when drug consumption definition was the same between articles and when mariners studied were different.

Conclusions: The prevalence of tobacco and alcohol consumption amongst seafarers was higher than that in the general population. Further studies on the use of drugs at work would be valuable for this population who are subject to significant occupational risk.

Seafarers are often represented in popular literature as heavy smokers and drinkers. Books such as Kipling’s Captains Courageous, which presents a much more positive view, are rare. Clinical studies over many years have confirmed the high prevalence of addition at the heart of this population [1–4]. Many factors favour the use of drugs in seafarers: geographical remoteness, social isolation, standing by a ship, dangerous situations, stress, sleep disturbance, and also high living standards. The search for positive effects such as the stimulant effect in the fight against fatigue, or negative, as in escape from stressful situations is therefore important for seafarers. As a result, the use of drugs presents a serious public health risk. The effect on seafarers is made even more serious by their life in an isolated and hostile environment, which involves high risk and requires vigilance and rapid reactions [5, 6]. For example, the use of alcohol or drugs is a risk factor for occupational accidents, particularly fatalities [7]. Sea fishing, for example is one of the principal industries of the United Kingdom, and is at the same time one of the most dangerous professions. Changes in working hours, extension of shifts, severe weather conditions, heavy lifting and work with hazardous equipment contributes to the raised fatality level in fishers [8]. The fatal accident rate in British fishermen was found to be 115 times higher than that of the general working population despite the progressive reduction in these levels since the second half of the 20th century. Recent studies show that the fishing industry is the most dangerous in the United Kingdom, and this corresponds with data from other countries [9, 10].

Addiction is common in seafarers, and as well as changes in general health results in increased risk of occupational accident in this population.

The aim of our work is to take stock of current knowledge about addiction among seafarers. What drugs are used and what is the prevalence of their use?

A review of the literature was performed. Articles were sought from medical databases, Medline® and from the journal of the Spanish Society of Maritime Medicine “Medicina Maritima” (Fig. 1). 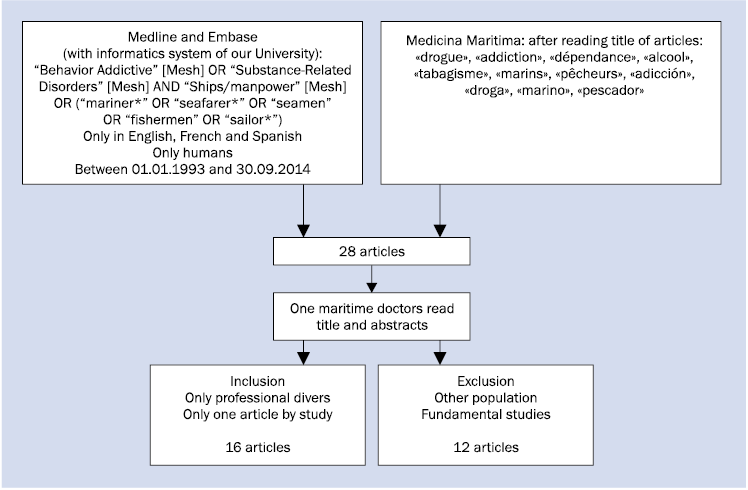 Research was conducted in 3 languages: English, French and Spanish. Research in English used the keywords: “Behavior Addictive” [Mesh], “Substance-Related Disorders” [Mesh]; “Ships /manpower” [Mesh]. The words “mariner” and its synonyms were each attached to these keywords with the “AND” function. Research in French used the keywords: «drogue», «addiction», «dépendance», «alcool», «tabagisme», «marins», «pêcheurs». Research in Spanish used: «adicción», «droga», «marino», «pescador». An additional literature search was conducted from the bibliographies of each article selected. Criteria for inclusion were the study of prevalence of use of at least one drug in articles published between 01.01.1993 and 30.09.2014. Articles studying the use of drugs which did not deal specifically with seafarers were excluded. If several articles considered the same mode of consumption of a substance, total prevalence was calculated using the virtual population represented by the subjects of each article. If several articles considered the same population, these subjects were only included once.

Table 1. Prevalence of smoking, alcohol consumption and use of other drugs among seamen according literature between 1995 and 2013

A recent review of the literature on cardiovascular risk factors showed a prevalence of 61.4% between 1988 and 2013 [4]. According to Mestre Molto et al. [20], alcohol consumption and smoking were strongly associated (p = 0.003).

Other articles used different evaluation criteria. Balanza Galindo [12] for example showed that 22% of seafarers did not drink, 22.5% were light drinkers, 36% were moderate drinkers and 22.9% were heavy drinkers. The higher the consumption of alcohol, the higher the rate of smoking. 55.1% of non-drinkers smoked vs. 89.2% of heavy drinkers (p > 0.001) [12].

Sedatives and other drugs

Use of these drugs is rarely studied. One study evaluated the use of sedative drugs [17], and another the use of other drugs (Table 1). Fort et al. [24] showed that 15% of seafarers had tried a narcotic at least once in their life [23]. Hallucinogenic mushrooms, cocaine and poppers were the other main drugs used (Table 1). The prevalence of use of these other drugs in the previous month was low (1%).

Drug use on board

Several studies considered the use of drugs on board. Percin et al. [27] showed that 68% of fishers used alcohol, but only 10% used it on board a ship whilst fishing. 81% of fishermen smoked on board, two thirds smoking more than 20 a day and 72% smoking more often on board than ashore [27]. Novalbos et al. [22] found that 9% of fishers used illegal drugs, of whom 3% used drugs on board. 30% of fishermen drank alcohol on board, at an average of 8.5 g/day.

In the studies using the same definitions of consumption, total prevalence was calculated. The main substances used were: tobacco (63.1%), alcohol (14.5%) and cannabis (3.3%) (Table 1).

This literature review was used to assess the prevalence of addiction in seafarers according to international publications: 63.1% smoked, 14.5% were hazardous drinkers according to the WHO definition and 3.4% had used cannabis in the previous month. Few studies focused on the use of heroin, cocaine, sedatives or other drugs. The use of alcohol or drugs on board a ship was also infrequently studies. However, 10% of mariners (or more) consume alcohol on board.

The aim of this study was to select articles from multiple databases in several languages. This is particularly important, since the issue of addiction amongst seafarers is an international problem.

On the same boat, mariners come from several countries and a mariner travels around the world. The method of calculation of total prevalence may appear biased. In calculating virtual populations from these studies, one seafarer may be counted several times. This possibility was taken into account, and given the years of the studies and the country of origin of the studies the probability that a seafarer was included several times is small. Equally analysis showed that the definitions of usage varied between studies, so in calculating total prevalence, the size of some virtual populations was small.

This literature review showed a high prevalence of smoking. Seafarers smoked more than the general populations of France and the United States: 63.1% vs. 21.5% and 20.6%, respectively [28–30]. Several reasons may contribute to these findings, such as unusual work patterns and lack of sleep [31]. Tobacco may be used as a stimulant, a distraction in those who are bored or as an anxiolytic for those in a stressful environment [32–34].

The prevalence of alcohol consumption was also higher than in the general population. By comparison, in France, problem drinking is seen in 10% of the population [35]. Nonetheless, studies in seafarers define the different levels of consumption of alcohol. It would be interesting to define the prevalence according to the different levels of use: use, use at-risk, harmful use, dependence. In order to understand the high prevalence in seafarers, several parameters should be studied. As an example, seafarers are at high risk of accident, of being victims of piracy, or of loss at sea [7, 36]. All of these may precipitate post traumatic stress disorder, which may lead to increased alcohol consumption [37–39]. In general, seafarers are exposed to many risk factors for stress, which is in itself a risk factor for drugs dependence [34, 40, 41]. In the general population, mortality due to alcohol consumption is a significant proportion of total mortality, particularly when one considers premature deaths [42]. This mortality is even more important amongst seafarers for whom alcohol is a risk factor.

The use of alcohol on board ranged between 10% and 30% according to studies [22, 27]. This use at work would seem to be higher than in the general population. Indeed, in a study of 2,805 employees, Frone [42] showed that the use of alcohol in the workplace was 15% in the United States. The effects of this use were not studied in mariners. These parameters allow a better assessment of the risk of occupational accidents. Meanwhile, Novalbos et al. [22] showed that 3% of the mariners used illegal drugs on board, which is comparable with data from the general population [22–43].

The consumption of drug on board is always a danger to seafarers. The risk of serious injury is often reported in the literature [44, 45]. Thus, the high prevalence of drug consumption and severity of accidents make this problem a major issue of maritime health. Clear information for seafarers should be their issue worldwide, as well as possibility to be cured in an addiction medical centre. But prevention would be more effective if it were issued to seafarers before they begin to use these drugs.

The prevalences of smoking and alcohol use were higher for mariners than for the general population. The use of cannabis in previous month was 3.3%. Other drugs were not enough studied in this population. In particular, it would be useful to better assess drug use at work for this population exposed to significant occupational risks.