Background: The peacekeeping military units of contributing countries are unfamiliar with the conditions prevailing in foreign mission areas and therefore have difficulties with medical supplies storage.

Aim: The aim of this study is to provide reasonable and practical guidance on the maintenance of medical supplies in the peacekeeping military units of contributing countries.

Materials and methods: A total of 1,972 prescriptions were received by the pharmacy in the peacekeeping level II hospital in the Republic of Sudan from February to July of 2009 including a total of 186 drug categories and 17,713 minimum packing units. Pairwise comparison was performed using the χ2 test. When the total number of samples was smaller than 40, the Fisher’s exact test was adopted for pairwise comparison.

Results: The majority of the consumed medicines mainly belonged to 6 categories, including specialty drugs, anti-microbial drugs, Chinese patent medicines, gastrointestinal drugs, central nervous system drugs, and drugs regulating fluids, electrolytes, and acid-base balance. Altogether, the drugs in the 6 categories accounted for 74% of all consumed medicines that were divided into a total of 20 categories.

Conclusions: Medicine consumption in peacekeeping level II hospitals is unique, therefore the drugs used in military medical facilities should be prepared according to their actual needs in the area of peacekeeping operations.

The medical institutions appointed by the United Nations in each area of peacekeeping operation are categorised into four levels. According to the “Generic Guidelines for Troop Contributing Countries Deploying Military Units to the United Nations Peacekeeping Missions”, the peacekeeping military units of contributing countries are responsible for the provision and maintenance of medical supplies in peacekeeping hospitals. However, the peacekeeping military units of contributing countries are unfamiliar with the harsh conditions prevailing in foreign mission areas and thus have great difficulties with medical supplies storage. The authors of this study previously worked with a medical team in a level II hospital while serving in a peacekeeping mission area in the Republic of Sudan.

The aim of the current study is to provide reasonable guidance on the medical supplies maintenance in peacekeeping military units of contributing countries based on the actual medicine consumption in level II hospitals in a mission area to better serve peacekeeping personnel and reduce medicines wastage. No similar studies have been published to date.

The peacekeeping level II hospital in United Nations Mission in Sudan (UNMIS) Sector II in the Republic of Sudan mainly served more than 1,700 of UNMIS participants, sometimes also served local people and UNMIS participants from other Sectors. From February to July of 2009, a total of 1,328 patients were treated and overall 1,972 prescriptions were received by the pharmacy in a peacekeeping level II hospital from February to October of 2009, including a total of 186 drug categories. A total of 17,713 minimum packing units were prescribed in 14 dosage forms, including tablets, capsules, injections, creams, ointments, and drops.

All data were entered into an Excel spreadsheet for calculation. In accordance with the pharmacological classification method included in the 16th edition of the “New Materia Medica” published by the People’s Medical Publishing House [1], the 186 drugs were classified into 20 ca­-tegories and 70 subcategories.

Pairwise comparison was performed using the χ2 test. When the total number of samples was smaller than 40, the Fisher’s exact test was adopted for pairwise comparison. The statistical software SPSS15.0 was used for the analysis.

Proportions in the 20 categories of consumed medicines

As regards the number of consumed medicines, the proportions in each of the 20 categories of consumed medicines, from highest to lowest, was as follows: specialty drugs; antimicrobial drugs; gastrointestinal drugs; central nervous system (CNS) drugs; drugs regulating fluids, electrolytes, and acid-base balance; hormones and related drugs; vitamins; drugs acting on the cardiovascular system; drugs affecting the blood and haematopoietic system; and drugs acting on the respiratory system. Other drugs, such as biologics and drugs falling into the other 9 categories, represented a small percentage of the consumed medicines (Fig. 1). Significant differences among the 20 drug categories

*p < 0.05; **p < 0.01; CNS — central nervous system; the number of different drugs was the same between Chinese patent medicines and antimicrobial drugs, between vitamins and cardiovascular drugs, between drugs acting on the respiratory system and those acting on the blood and haematopoietic system, between anti-allergic drugs and biologics and autonomic nervous system drugs, between anti-parasitics and enzymes and drugs for surgical use, and between anaesthetics and cerebrovascular drugs and neutraceuticals. Therefore, one drug was selected from each category for comparison.

Proportion and significant differences among the 70 subcategories of consumed medicines

CNS medicines. Among the CNS medicines, antipyretics, analgesics, and anti-inflammatory drugs accounted for nearly a half of the medicines in this category at 46%. Anti-anxiety drugs got the second place at 23%, and comparison between anti-anxiety drugs, antipyretics, analgesics, and anti-inflammatory drugs did not show significant differences (χ2 = 0.650, p = 0.688).

Dermatological drugs in the category of specialty drugs 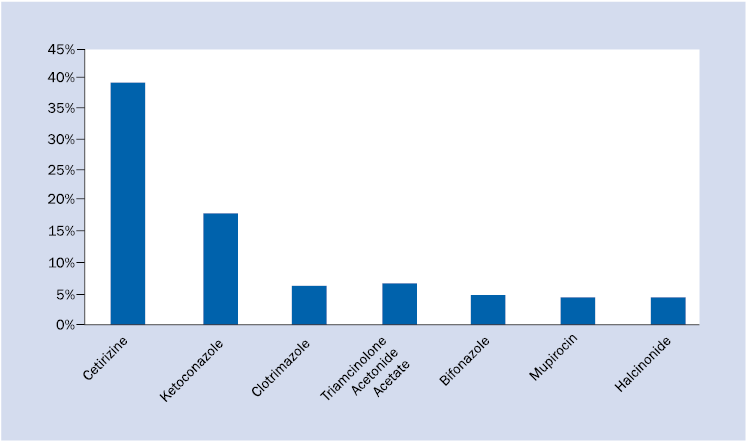 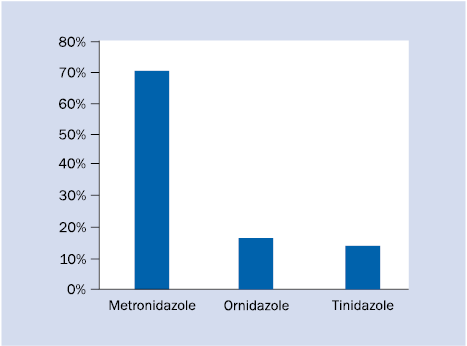 There has been a significant difference between the consumption of famotidine tablets (showing the highest consumption) and ranitidine hydrochloride capsules in second place (χ2 = 7.923, p = 0.006). However, ranitidine hydrochloride capsules showed no significant difference compared to esomeprazole enteric-coated tablets in third place (χ2 = 1.436, p = 0.259) (Fig. 5). 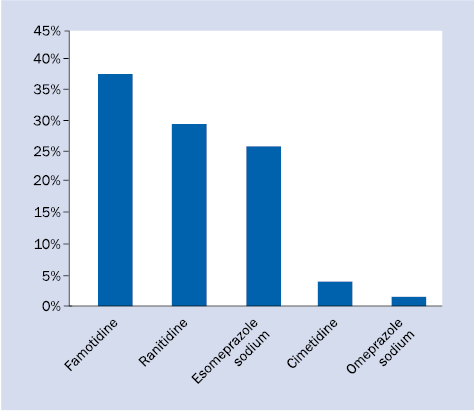 The most common diseases diagnosed in the peacekeeping mission area Figure 6. Proportions of the most common diseases diagnosed

A total of 186 medicines were divided into 20 categories based on their pharmacological properties. The results showed that the majority of the consumed medicines mainly belonged to 6 categories, including specialty drugs, anti-microbial drugs, Chinese patent medicines, gastrointestinal drugs, CNS drugs, and drugs regulating fluids, electrolytes, and acid-base balance. All of the drugs falling into these 6 categories accounted for 74% of all consumed medicines that were divided into a total of 20 categories. The other 9 categories, including drugs such as biologics and anti-allergic drugs, only accounted for a small proportion of the consumed medicines (10%). The medicine consumption was consistent with the most common diseases diagnosed in the peacekeeping mission area.

There were 7 types of specialty drugs, including dermatological, otorhinolaryngological, and gynaecological drugs, they ranked among the most commonly consumed medicines (21%), suggesting that the diseases of patients hospitalised in level II hospitals are different from those of typical outpatients. This difference was most likely related to the type of services provided at level II hospitals, mainly targeted at previously healthy soldiers and young people. There has been a significant increase in the use of gynaecological medicines over time, suggesting that there was an increasing number of female patients; thus, the proper provision of gynaecological medicines cannot be ignored.

Antimicrobial drugs were the second most common type of drugs, indicating that the incidence of infectious diseases remains high.

Gastrointestinal drugs were ranked first among the 5 major system drugs, suggesting that the incidence of gastrointestinal diseases is higher than that of diseases of the other major systems. Acid reducers and antidiarrheals were the most often consumed gastrointestinal drugs, which could have resulted from the fact that the Sudanese diet consisted mainly of meat but lacked fruits and vegetables. In addition, the United Nations staff come from different places around the world, and the changes in the living conditions and the working environment, increased pressure, high temperature and humidity, and the consumption of perishable foods may have led to high incidence of gastrointestinal diseases, including gastritis and intestinal infection.

Among the CNS drugs, anxiolytics represented a significant proportion of the consumed medicines, suggesting that the problem of psychological stress among peacekeepers requires greater attention.

Cephalosporins and nitroimidazoles were the 2 most commonly consumed antimicrobial drugs. Among the cephalosporins, ceftriaxone and cefazolin sodium were consumed in the largest amounts, and metronidazole was the most consumed type of nitroimidazole drug. Cephalosporin antimicrobial drugs, especially the third-generation, have been widely used because of their broad spectrum, powerful antibacterial effects and lower level of adversity. During the 6-month study period on clinical treatment at level II hospitals, ceftriaxone was used for the treatment of 4 black and 3 white patients, and no adverse reactions were reported, suggesting that the third-generation cephalosporin drugs can be safely used in patients of different races. The choice between ceftriaxone and cefazolin sodium was mainly related to the doctors’ prescription habits [2]. Between February and July of 2009, 6 cases of appendicitis were hospitalised in the level II hospital, which, together with a large number of stomatological outpatients, made the nitroimidazole drugs the second most consumed drugs.

Although the consumption of circulatory and respiratory system drugs accounted for merely 4% of the overall drug consumption, emergency drugs such as adrenaline, lobeline, remefline, and lamine must be stored, even if they not used for 6 months, as such are the requirements of a level II hospital. Antihypertensive drugs and bronchial smooth muscle spasmolytic drugs must be stored as well.

Drug consumption in peacekeeping level II hospitals is unique, therefore the drugs used in military medical facilities should be prepared according to their actual needs and characteristics.

Carry-on drugs should be carefully selected. The priority consideration should be placed on 6 categories of drugs, including specialty drugs, anti-microbial drugs, Chinese patent medicines, gastrointestinal and CNS drugs, as these accounted for 74% of the total medicine consumption. Of the 6 categories, dermatological drugs, cephalosporins, drugs for surgical use, antacids, antidiarrheals, antipyretics, analgesics, and anti-inflammatory drugs should be given the highest priority.

Although 9 categories of drugs, such as biologics, anti-allergy drugs, narcotic and adjuvant drugs, only accounted for a small proportion (10%) of the consumed medicines, they should be stored in small amounts to ensure the treatment capability of peacekeeping level II hospitals and the safety of medical personnel. These medicines include tetanus antitoxin, anti-malarial drugs, and first aid and basic drugs, such as adrenaline, lobeline, remefline, and lamine.

The perishability and safety of carried drugs should also be given some consideration. More medicines should be in the form of tablets and capsules rather than explosive aerosols and perishable liquids.