Submit an article Author Guidelines Ahead Of Print Reviewers 2019
_11_FM_04_15_Dabrowski

A case of elongated styloid process in a modern-age skull from Puerto Cabello, Venezuela

Background: The styloid process (SP) arises from cartilage of the second branchial arch and tends to calcify during later life. If the length of the SP is more than 30 mm, it can be considered abnormally elongated. Clinical symptoms associated with elongation of this type are defined as Eagle’s syndrome. The paper presents a case of an elongated SP in a modern skull from Puerto Cabello, Venezuela, obtained from a series of skulls of African slaves kept at the Department of Anthropology, Polish Academy of Sciences in Wroclaw.

Matrials and methods: The skull belonged to a male individual, aged ca. 55 years at death (maturus). In terms of basic anthropometric features it had slightly greater facial width parameters in comparison to the cerebral part, and a shorter length of neurocranium when compared to average values of morphological features in African skulls from Uganda.

Results: Further macroscopic analysis revealed the presence of an elongated SP (ca. 70.1 mm) with secondary lesions remaining after a healed fracture. Imaging of the bone structure of the elongated SP was carried out using a computed tomography scan, with multilevel image analysis without contrast. The elongation and calcification of the left ligament in anterior orientation could have caused irritation to the structure of cranial nerves, running within the parapharyngeal space, and to sympathetic fibres running in the wall of cervical arteries.

Conclusions: Analyses of craniological materials recovered during excavations or as part of old osteological collections are rare due to the fragility of this bone structure, and for that reason they may be a valuable source of information on the health status of historic human populations. (Folia Morphol 2015; 74, 4: 475–478)

The styloid process (SP) is an anatomical structure located on the base of the skull. A precise understanding of the mechanism of SP elongation and calcification requires knowledge of its embryogenesis [11]. During human development the SP, stylohyoid ligament, lesser horn of the hyoid bone and the superior part of the hyoid body are derived from Reichert’s cartilage, which arises from the second pharyngeal arch [11]. It composes of four parts: tympanohyal, stylohyal, ceratohyal, and hypohyal and tends to calcify during ontogenesis [2, 4]. The tympanohyal part forms the tympanic portion of the temporal bone and stapes. It creates the most superior part of the SP [4, 11]. The lower part of the SP and the upper part of the stylohyoid ligament stem are from the stylohyal portion. That part may play a main role in elongation of the SP as a result of fusion between stylohyal and tympanohyal part [11]. The third portion, the ceratohyal, degenerates in utero, giving rise to the stylohyoid ligament. The fourth and most distal portion is known as the hypohyal and becomes the lesser cornu of the hyoid bone [16]. The styloid part undergoes calcification in the first 8 years of life. If the length of the SP is more than 30 mm, it can be considered abnormally elongated [5, 9]. Elongation can be associated with excessive mineralisation of the cartilage, or may result from mineralisation of the stylohyoid ligament, connecting the apical part of the SP with a lesser horn of the hyoid bone [9, 14]. The elongation of the osseous part can be unilateral or bilateral, symmetric or asymmetric [3]. Clinical symptoms associated with the elongation of this type are defined as Eagle’s syndrome [12].

Usually, reports on the elongation of the SP are related to head and neck examination carried out due to exacerbated conditions and complications manifested by pain [3, 5]. Analyses of craniological materials, especially those recovered during excavations or as part of osteological collections, are rare due to the fragility of this bone structure, and for that reason they may be a valuable source of information on the health of historic human populations.

The aim of the study was to carry out anatomical and anthropological evaluations of a case of elongated SP on the left side of a skull, and an attempt to analyse its biological effects on the quality of life of the studied individual.

The analysis was carried out on a modern age skull, no. 8, from a male individual aged 55 years (maturus), obtained from a pre-World War II series of skulls of African slaves from Puerto Cabello, Venezuela, and kept in the collection of bone materials at the Department of Anthropology, Polish Academy of Sciences in Wroclaw. The skull preservation was estimated as calvarium. It had an incomplete number of permanent teeth (8 teeth in the upper alveolar arch) and distinct dimorphic features in the supraorbital, zygomatic and occipital areas. The skull had different sizes of styloid processes, with the longer axis of the left process and larger occipital condyle and mandibular fossa on the right side.

The sex and age at death of the individual were estimated based on the recommended skeletal and dental sets of diagnostic features, and based on the radiographic developmental characteristics of secondary dentine [1, 6–8]. We analysed the supraorbital area and glabella for the expression of features, in temporal and zygomatic areas on both sides, and the squama of the occipital bone for the presence of external protuberance. In addition, we analysed the size of muscle insertions. For morphometric measurements we used dedicated standard anthropometric equipment and electronic callipers (150 digimatic Mitutoyo).

We took basic craniofacial measurement (length and width), including orbital cavities and anterior nasal aperture, and distance between standard anthropometric points [8]. The imaging of the bone structure of the elongated SP was carried out using a computed tomography (CT) scan, with multilevel image analysis without contrast. Visualisation was performed using a dual source Siemens Definition Flash CT, with an effective radiation dose of 2 mSv.

The analysed skull originated from an adult male and had morphological features (metric and descriptive) of the Negroid race. In terms of basic anthropometric features it had slightly greater facial width parameters in comparison to the neurocranial part, and shorter maximum cranial length (g-op) when compared to average values of morphological features in African skulls revealed in the analysis of available data for craniological material from Uganda. Measurements of the calvarium allowed for the creation of a profile presenting normalised values of differences between the measurements of the skull from Puerto Cabello and mean values from the measurements of skulls from male individuals from Uganda (Fig. 1). 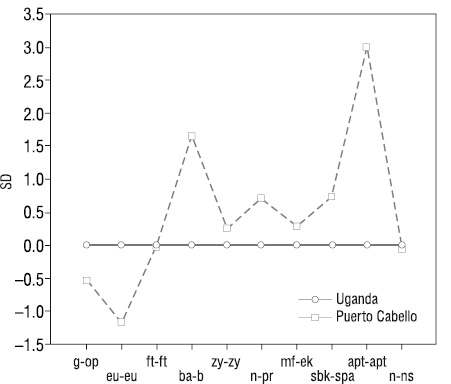 The macroscopic analysis of morphological features of the skull revealed an elongated left SP (ca. 70.1 mm) on the skull base, together with secondary lesions resulting from a healed fracture, resembling callus (sagittal diameter of 6.6 mm). Bone hyperplasia occurred near the base of the SP (max. width 11.2 mm at the level of the callus) (Figs. 2, 3). However, the size of the right process was normal. 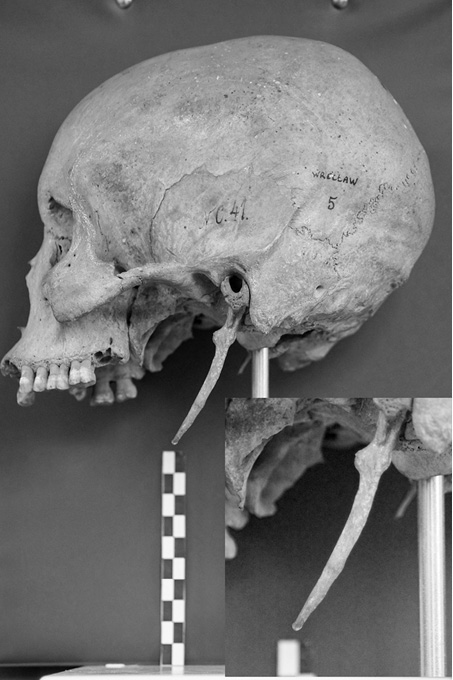 Figure 2. The skull from Puerto Cabello with 3× magnification (right lower corner) of the elongated styloid process with visible area of fracture. 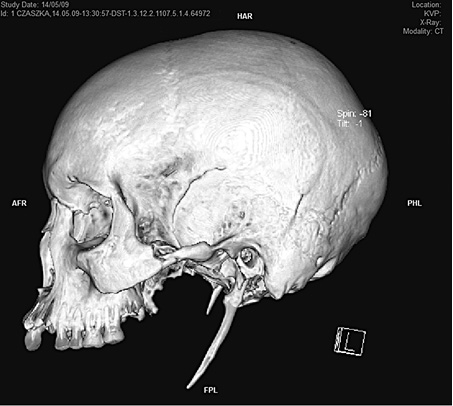 Figure 3. Computed tomography image of the skull from Puerto Cabello, with visualised elongated styloid process and its fracture site.

The normal length of the SP varies from 25.0 mm to almost 45 mm. Elongation of that process is defined when it is longer then 30–40 mm [15] and it is described as anatomical anomaly. It appears in 2–30% in human adults [15]. Usually authors described more commonly unilateral elongation of the process [13]. Bilateral elongation is rare. The analysis of a CT image revealed, at the site of bone hyperplasia, the presence of previously formed pseudo-arthrosis, which due to bone hyperplasia later underwent secondary calcification (Fig. 3). Fracture of the SP may be indicated by a longitudinal groove-shaped mark on the temporal bone and partly on the right occipital bone, about 75 mm long, running almost vertically from the upper margin of the external auditory foramen towards the upper margin of the occipital bone, being most likely the result of a mechanical injury. The nature of the injury and its course imply an impact with a sharp-edged tool, causing, however, no damage to deeper layers of diploë or inner epidural skull structure [8]. As a result, the mechanical force acting on the right side of the head could have caused a sudden, non-physiological repositioning to the left side, leading to the fracture of the already calcifying ligament. We found no bone-related complications, either caused by the extracranial injury or fracture of the SP.

On the other hand the observed CT images may indicate on the presence of the unilateral ossification of the stylohyoid ligament. Clearly visible protrusion at the proximal end of the process may indicate the area of connection between ligament and process. Skrzat et al. [15] described that connection as a bulge of bony mass in the middle parts of the ossified complexes. Its presence may indicate the place of attachment of the ligament to the SP. The bony bulge in the Puerto Cabello skull is situated too proximal to be, according to authors’ experience, a connection point between ossified ligament and elongated process. So the most probable cause of bony enlargement is a healed fracture. The length of the elongated SP is really overstandard [4], therefore the described structure was created during cooperation of two processes: elongation of the SP and calcification of the proximal end of the stylohyoid ligament. The line of the connection between two anatomical elements is invisible.

The elongation of the left calcified ligament and the slightly angular and anterior orientation of its apical part could, however, have finally had an irritating effect on the structure of facial, mandibular, accessory and vagus nerves, running within the parapharyngeal space, and on sympathetic fibres running in the wall of cervical arteries. Trigeminal neuralgia undoubtedly developed due to the injury to the elongated SP, must have caused significant discomfort in the life of this individual [10, 12].

Clinical symptoms associated with mechanical effects of the asymmetrically elongated SP on the adjacent anatomical structures usually include unilateral spontaneous neck pain on opening the mouth, speaking, mastication and yawning, and sometimes sharp pain while turning the head. In the analysed case, the revealed bone lesions could be associated with a slave lifestyle and all its consequences. We believe our findings can contribute to studies on the health status of slaves of African origin in South America.

The authors would like to thank the head of the Department of Anthropology, Polish Academy of Sciences in Wroclaw prof. Slawomir Koziel, for the opportunity to carry out tests on the osteological material derived from exotic skull collection.