Criss-cross atrioventricular (AV) connection is a condition in which the ventricular inflow tracts are crossed, hence the name criss-cross. Ventricles are positioned contra laterally to the atria to which they are connected. The most common is atrial situs solitus presentation with right atrium (RA) connected to left-sided right ventricle (RV) with anterior tricuspid valve and left atrium (LA) connected to right-sided left ventricle (LV) with mitral valve oriented in the posterior direction. There is crossing of systemic and pulmonary venous blood without mixing in the AV valves [1]. The VA connection is extremely variable: discordant being the most common type followed by double outlet right ventricle (DORV) and many more but Taussig-Bing anomaly, which is another rare congenital heart disease has never been reported.

Nine month male baby was admitted with fever and tachypnea. She was product of non-consanguineous marriage and was delivered normally. She weighed 3.9 kg while at birth 2.2 kg. There was history of diaphoresis while feeding and recurrent episodes of chest infection. Her parents noted mild cyanosis during her early infancy. Her SO2 was 89%. On examination, pulse rate was 134 with all pulses preserved. Jugular venous pulse was elevated. Right ventricular heave was conspicuous. There was left ventricular (LV) type of apical impulse. Thrill was present in left third intercostals space. P2 component of S2 was loud with splitting preserved. Systolic murmur was heard in base. There were bi-basal crepts. Routine blood investigation indicated mild leukocytosis. Chest X-ray PA view showed cardiomegaly (cardiothoracic ratio 0.58) with pulmonary plethora. Electrocardiogram showed right axis deviation, clockwise loop, right ventricular hypertrophy and well preserved R waves in V5–V6 reflecting LV volume overload.

The visceroatrial situs was solitus with levocardia (Fig. 1A). Sub costal view showed atrio-ventricular concordance. Cardiac chambers were identified on their morphological characteristics. Right atrium (RA) was on the right side and was connected to right ventricle (RV) which was left to the LV; left atrium (LA) was on the left side and connected to LV which was right to the RV. Ventricles appeared to have been rotated about their long axes without concomitant motion of the AV valve annuli, producing actual crossing of the ventricular inflow tracts therefore establishing the diagnosis of criss-cross heart (Fig. 2). When great arterial connections were probed, both Ao and pulmonary artery (PA) were seen arising from right ventricle (Fig. 3). There was ventricular septal defect which was sub pulmonary (Fig. 3). Pulmonary trunk was seen over-riding sub pulmonary ventricular septal defect (Fig. 3). Pulmonary trunk was situated right, posterior and inferior to the Ao (Fig. 4). There was no right ventricular outflow tract (RVOT) obstruction (Fig. 1B). Also there was no pulmonary-mitral continuity. The great arterial connections confirmed the diagnosis of Taussig-Bing anomaly. There was no coarctation (Fig. 1B). When agitated saline as contrast was injected in right arm, it was seen coursing from RA to RV to Ao thus further confirming atrio-ventricular concordance (Fig. 5). Biventricular systolic function was qualitatively normal.

Figure 1A, B. Visceroatrial situs solitus (A); no coarctation (B) 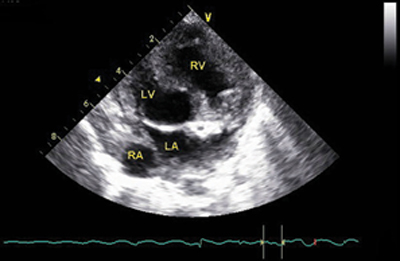 Figure 2. Atrial situs solitus with ventricles appeared to have been rotated about their long axes i.e. Criss-cross heart. Right ventricle (RV) which is left to the left ventricle (LV) 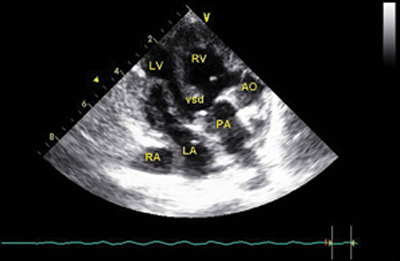 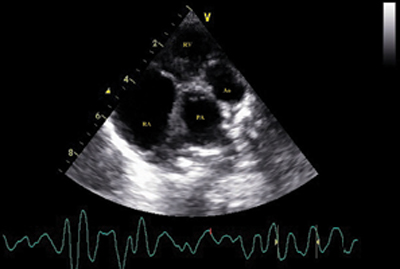 Figure 4. Pulmonary trunk is situated right, posterior and inferior to the aorta (Ao) 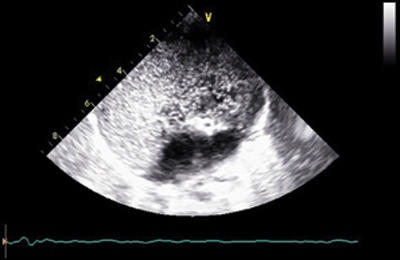 The criss-cross heart is an extremely rare malformation but well described morphologically. It was first described by Lev & Rowlatt [2] in 1961, but it was only in 1974 that Anderson et al. first used the term criss-cross heart which accounts for less than 0.1% of congenital heart defects [1]. It is especially important anomaly because it illustrates a key component essential to understand congenital defects: the difference between situs concordance and alignment concordance; both concepts being important for deciphering and understanding congenital anomalies.

Criss-cross heart therefore illustrates an important concept that AV segmental situs is not always predictive of AV alignment therefore both needs different description and elucidation. The diagnosis of criss-cross heart is based on the intersection of the axes of the ventricular entries. In contrast to normal heart where these axes are virtually parallel, CCH is characterized by a spatial change of the ventricular mass that guides or appears to guide, each ventricle in a contra lateral position in relation to the corresponding atrium. While the base of the heart remains unchanged in its spatial position, the ventricles appear to have been twisted along their longitudinal axis. This promotes a change in hemodynamics characterized by crossing flows through the atrioventricular valves, resulting in the false impression that each atrium is being directed to the contra lateral ventricle [3].

A review of the literature revealed that this anomaly rarely occurs in isolation. Most patients have ventricular septal defects, transposition of the great arteries, double-outlet right ventricle, hypo plastic right ventricle, pulmonary stenosis and tricuspid hypoplasia. Other associated defects, although less frequent, are straddling mitral or tricuspid valve, sub aortic stenosis, aortic arch obstruction and mitral stenosis [3–6]. The diagnosis becomes more difficult due to the similarity of the clinical presentation of the different connections abnormalities [7, 8]. The transthoracic echocardiography can be used to identify the position and morphology of all cardiac chambers, AV valves, in addition to the connections between chambers and vessels. The sub costal window will determine the location of the heart apex and assess mainly the ventricles characteristics. The morphological features help determining the morphologic ventricle characteristics [7]. The great arteries connections are better visualized in the parasternal window [9, 10]. The differential diagnosis of criss-cross heart should include straddling atrioventricular valve, double atrial outlet where an outlet orifice apparently crosses the other valve, and severe forms of Ebstein anomaly on which the tricuspid valve opens to the infundibulum, giving the appearance of crossing the valves [10].

In Taussig-Bing anomaly, as the flow is from RV to aorta and LV blood preferentially enters the lung, cyanosis dates since birth. Consequently, neonates typically present with cyanosis, systolic murmur and heart failure. As the pulmonary vascular resistance increases, PBF curtails and cyanosis deepens but longevity prolongs. Clinically they may resemble transposition of the great arteries, but a scan from posterior to anterior in the apical four-chamber view shows the crossing axes of the atrioventricular valves. Similarly Doppler color flow mapping has been reported to facilitate detection of crossing of the inflow streams.

Taussig-Bing is a rare condition and accounts for 1–1.5% of all congenital cardiac malformations. The distinctive features of the Taussig-Bing malformation are true double outlet right ventricle, semi lunar valves side-by-side and approximately at the same height, a bilateral conus with approximately equally well-developed muscular sub aortic and sub pulmonary conal free walls, and a large sub pulmonary VSD. Despite many years of experience with various management strategies, Taussig-Bing anomaly still continues to pose a considerable challenge to surgeons, largely related to its associated anomalies. Treatment may include initial palliation with a systemic-to-pulmonary shunt to increase pulmonary blood flow and improve cyanosis. This is followed by staged progression toward completion of a Fontan-type operation in the majority. However the two rare cases of the congenital deformities viz. Criss-cross heart and Taussig-Bing anomaly have been reported in isolation but literature review did not show dual occurrence in a single patient till date and our case appears to be the first one such.