A 34-year-old male patient was diagnosed with acute coronary syndrome and referred to our clinic for coronary angiography. Baseline cardiac examination on admission was normal and electrocardiography revealed ST segment depressions in the inferolateral leads. Transthoracic echocardiography revealed a regional hypokinesia in the right coronary artery (RCA) territory with an estimated left ventricular ejection fraction of 50%. Laboratory tests were normal expect an elevated level of troponin I (0.4, reference 0.000–0.016 ng/mL). Clopidogrel, acetylsalicylic acid, beta-blocker, statin, angiotensin-converting enzyme, nitrate and heparin was initiated. Coronary angiography revealed a significant atherosclerotic stenoses in the proximal and mid segment of RCA. It was decided to perform percutaneous coronary intervention. After post-dilatation with a non-compliant balloon TIMI 2 flow was observed and intracoronary bolus of tirofiban followed by intravenous infusion was administered. During this complex procedure we approximately injected 400 mL of iohexol (Omnipaque®, GE Healthcare Co., Ireland Cork, Ireland) and 15,000 IU of unfractionated heparin. After 4 hours, the patient complained of drowsiness, severe headache, nausea, and vomiting. The patient’s pupil reflexes were prompt and isocoric, blood pressure was 100/60 mm Hg and heart rate was 80 beats per minute. Complete blood count revealed a hemoglobin level of 14.7 g/dL and platelet count of 233,000/μL platelets. The prothrombin time (international normalized ratio) was 1.28, the activated partial thromboplastin time was 140.3 seconds, serum creatinine was 0.89 mg/dL, aspartate aminotransferase and alanine aminotransferase were 26 U/L and 50 U/L respectively. Emergent non-contrast brain computed tomography (CT) was performed. Diffuse intracranial hyperdensity in the transverse sinuses and dura along the tentorium was observed (Figure 1A, B). We immediately discontinued acetylsalicylic acid, clopidogrel and tirofiban, and administered intravenous sodium valproate, mannitol and protamine sulfate. Neurology and neurosurgery consultations were requested. After 4 hours the patient’s symptoms were completely recovered. Control non-contrast brain CTs at the 4th and 24th hours showed a decrease in the hyperdense involvements (Figure 1C–F). Acetylsalicylic acid and clopidogrel were reinitiated and patient was discharged on the 4th day without any neurologic or cardiac sequela. On the 1-month visit, he was free of any complaints and brain CT was totally normal. 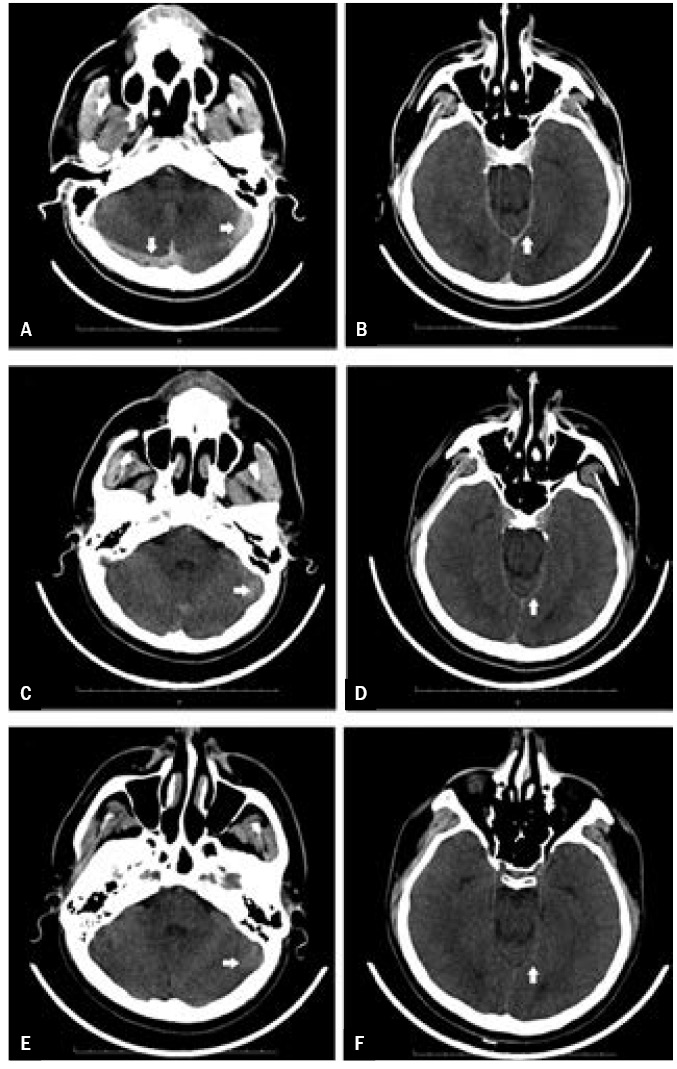 The author received no financial support for the case and/or authorship of this article.