When asymptomatic, any anomalies of the veins used during cardiac implantable electronic device (CIED) implantation procedures are difficult to detect in the preoperative period. This may lead to problems in performing the procedure and increases the risk of complications. An abnormal position of the left brachiocephalic vein (BCV) in the mediastinum may increase the risk of injury to the vessel itself as well as to adjacent anatomical structures [1].

The morphometry and/or topography of the left BCV may be altered by post-thrombotic venous lesions, congenital systemic vein anomalies, or compression by upper mediastinal lesions [2–4]. Development of collateral circulation compensates the compromised systemic venous blood flow by eliminating clinical manifestations, at least initially.

This paper presents a case report of clinically silent mechanical compression of the left BCV, which caused partial obstruction of the vessel and, consequently, hindered cardiac lead advancement during pacemaker (PM) implantation. The altered left BCV morphometry resulted from an unusual proximity between the brachiocephalic trunk (BCT) and the sternum.

An 82-year-old female with a history of paroxysmal atrial fibrillation was admitted due to another episode of arrhythmia with atrioventricular conduction block. Her ventricular bradyarrhythmia was accompanied by episodes of cardiovascular syncope (Stokes-Adams attacks). Apart from a history of well-controlled hypertension there were no other health problems.

After her sinus rhythm was restored, the patient was qualified for a preventive therapy via permanent cardiac pacing. On June 2, 2017, a cardiac lead was introduced via cephalic vein (CV) cut-down through the left deltopectoral approach. In order to explain difficulties in cardiac lead advancement a contrast agent was administered through the lead insertion site. Posteroanterior fluoroscopy revealed contrast flow blockage in the left BCV at the level slightly superior to the tracheal bifurcation. Retrograde contrast enhancement of the ipsilateral and, subsequently, contralateral (right) internal jugular veins (IJVs) could be seen (Figure 1A). Another venography approach, this time via right antecubital venous access, demonstrated retrograde contrast enhancement of the medial segment of the left BCV, which confirmed the site of the vessel’s compression (Figure 1C). Eventually, transvenous cardiac lead placement for the CIED implantation was performed via a left-sided approach (a Sensia DR pacemaker, Medtronic; with a Solia S 53 atrial lead and a Solia S 60 ventricular lead, Biotronik). Our initial difficulty with lead advancement through the vascular narrowing was overcome by the use of a guidewire, which was also used in the case of the other lead. One factor which may have facilitated catheter/

/guidewire advancement were breathing-related variations in the distances between the anatomical structures compressing the left BCV, with the compression diminished during inhalation.

Fluoroscopy images obtained during the initially unsuccessful attempts of advancing a cardiac lead through the narrowing may misleadingly suggest an association with the visible tracheal deformity. Such association, however, can be excluded based on the natural anatomical distance between these two structures (Figure 1A–C). 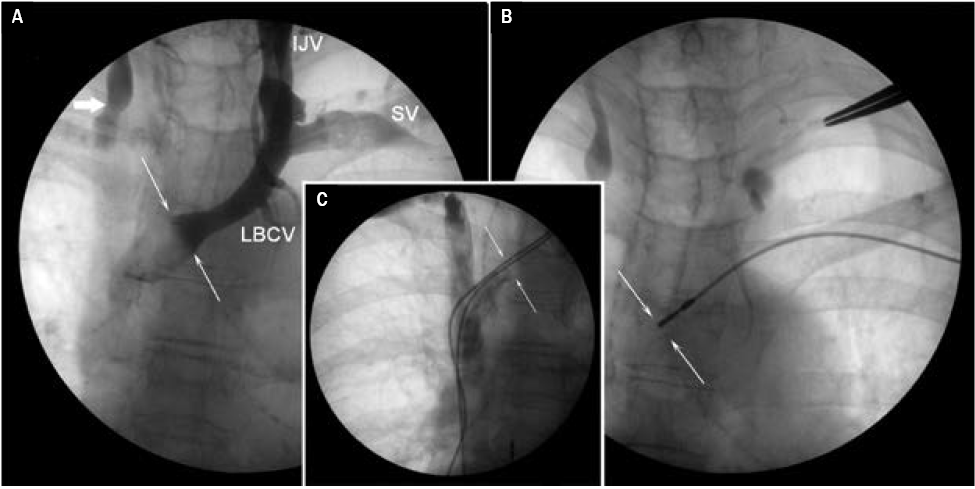 Figure 1A. Selective contrast administration into the left CV revealed left brachiocephalic vein (BCV) obstruction above the level of the tracheal bifurcation (arrows). Note the retrograde flow of contrast into the left internal jugular vein (IJV), with the lumen diameter similar to that of the left subclavian vein (SV) and the left BCV. Note the retrograde flow of contrast into the right IJV (thick arrow) via the sigmoid sinus; B. The site of difficulties in cardiac lead advancement, corresponding to the level of contrast flow blockage in panel A (arrows). Localized contrast agent retention in both IJVs near venous valves; C. Right-sided contrast administration into the CV showed retrograde flow into the left BCV up to the point of lumen narrowing indicated in panel A (arrows)

In order to identify the cause of left BCV narrowing, computed tomography (CT) angiography was performed after the CIED implantation procedure. CT scans demonstrated that the space between the sternum and the BCT, where typically the left BCV passes, was markedly reduced (Figure 2B, C).

Figure 2A. Chest radiogram (P-A view); B. The position of the left brachiocephalic vein (BCV) in relation to large vessels of the upper mediastinum. Image reconstruction adjusted to visualize the intravenous cardiac leads. A 3-D computed tomography (CT) reconstruction illustrating a typical position of the left BCV, i.e. anterior to the brachiocephalic trunk (BCT), left common carotid artery, and left subclavian artery; C. A sagittal CT reconstruction showing the left BCV, with a cardiac lead in its lumen, coursing between the BCT and the sternum (oval)

Successful cardiac lead placement during CIED implantation procedures requires patency of the selected transvenous route. In some cases venous occlusion is detected only during unsuccessful attempts at lead advancement.

One of the veins used during transvenous CIED implantation procedures is the left BCV, the vessel that is formed by the confluence of the left IJV and the left subclavian vein (SV) and is an anatomical continuation of the latter. During the embryonic development of the venous system, the left BCV runs obliquely from left to right in the upper mediastinum and joins the right BCV to form the superior vena cava. The left BCV is typically positioned between the sternum in front and aortic arch branches (the BCT, left common carotid artery and left subclavian artery) behind.

The left BCV location may lead to a natural compression of the vessel, while in extreme situations it may result in a significant narrowing of its lumen, as was the case in the patient presented here. Left BCV compression may be amplified by such factors as the supine position, advanced age, or a dilated aortic arch. This local topography also suggests a likely mechanism for the post-thrombotic lesions occluding the left BCV lumen in the case described by Świętoń et al. [2].

Morphometric anomalies of the left BCV in patients requiring transvenous lead placement may result in vascular injury. Forcing the lead through the narrowing, by changing the moment of the force exerted by the lead tip, may damage the endothelium of the superior vena cava and result in thrombosis. In the case presented here, the difficulties in lead advancement through this venous segment in combination with initial venography findings suggested a more complex anatomical anomaly, before they were eventually explained.

In case of vascular anomalies, the diagnostic modalities available during a CIED implantation procedure are limited to venous lumen enhancement via contrast administration. A more thorough investigation of the mechanism behind the observed phenomenon is possible only after the procedure is over, with diagnostic assessments including CT scans or MRI (the latter possible only with MRI-safe pacing systems). Ultrasound examination may also provide indirect evidence indicating the possibility of this anatomical positioning [5, 6].

The phenomenon presented in this paper increases the risk of future left BCV thrombosis and occlusion, which may be further increased by the potential endothelial injury in this vascular segment due to the presence of cardiac leads in its narrowed lumen.