Extensive postoperative bleeding in the first 24-h postoperatively is always a problematic finding. It makes cardiac surgeon to decide if the patient should be reoperated or conservative treatment would be the most appropriate. Patients at high risk of serious complications should be considered for resternotomy. Such treatment strategy can be found in 2–12% of patients operated in cardiac surgery departments [1, 2]. However, this complication increases the risk of in-hospital mortality from 2.72 to 22% of reoperated patients [3, 4]. Decision for reoperation should be considered if mediastinal blood drainage excides 200 mL/h in the first 4 postoperative hours or when reported bleeding is rapid [2]. Moreover, the mortality is higher if drainage excides 2 mL/kg in the first 2 hours or the amount of blood excides 200 mL/h in any of the first 6 postoperative hours. Drainage exceeding 495 mL/24 h is also a negative prognostic factor for the need of transfusion, hypotension, organ failure, prolonged ventilation, dialysis, and in-hospital infections [5]. Conservative treatment is also possible and it could be considered shortly after the operation. It is based on administration of the coagulation factors combined with bedside testing (activated clotting time, thromboelastometry, whole blood impedance aggregometry) and results in decreased incidence of blood transfusion and thrombotic/thromboembolic events [6]. Therefore, defining patients with high risk of postoperative hemorrhage is important for postoperative planning.

In this study, we sought to identify patients at high risk of increased postoperative bleeding after off-pump surgical treatment of coronary artery disease (OPCAB).

This is a retrospective study including all patients who under­went OPCAB in the Department of Cardiac Surgery, Medical University of Warsaw from 01.01.2004 to 31.12.2008. The analysis was conducted on data collected from medical records of patients, following the internal audit approval. The inclusion criteria were: OPCAB through the median sternotomy, one surgeon. The exclusion criteria included: combined procedures (operations different than isolated coronary artery bypass grafting [CABG]) and conversion to surgery with cardiopulmonary bypass (Figure 1). 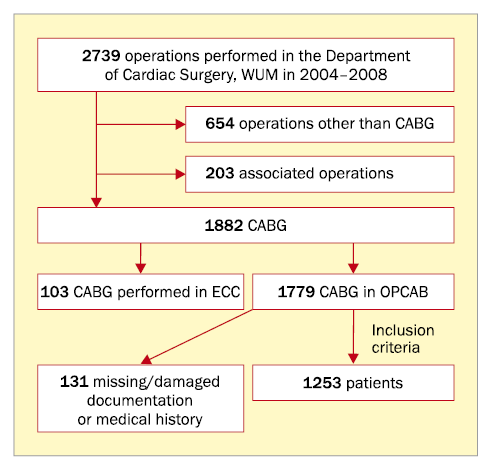 The data were statistically analyzed for occurrence of increased postoperative bleeding using t-test, Kruskal-Wallis test and Rho-Spearman analysis for measurable parameters. For immeasurable parameters was used U Mann-Whitney test. Finally we performed paired comparison analysis for blood drainage indexed with BSA. Statistical significance was determined at the level of p below 0.05.

One thousand and fifty-three patients aged 65.5 ± 9.6 years were enrolled into the study. Nine hundred and twenty-four patients of the analyzed population were male (73.74%). Urgent operation was performed in 131 (10.45%) of cases meanwhile emergency operation was 47 (3.75%) of cases. The average amount of drained blood in the first day after the surgery was 716.74 ± 430.12 mL. Seventy-six patients (6%) underwent a surgical re-exploration due to postoperative bleeding. Patients undergoing reoperation received significantly more PRBC within 24-h postoperatively (6.64 u. vs 1.98 u., p < 0.0001).

Among factors elevating mediastinal drainage in the first day after the surgery were: advanced CAD, admission of clopidogrel at least 5 days before surgery and arterial grafts (Table 1, Figures 2 and 3). 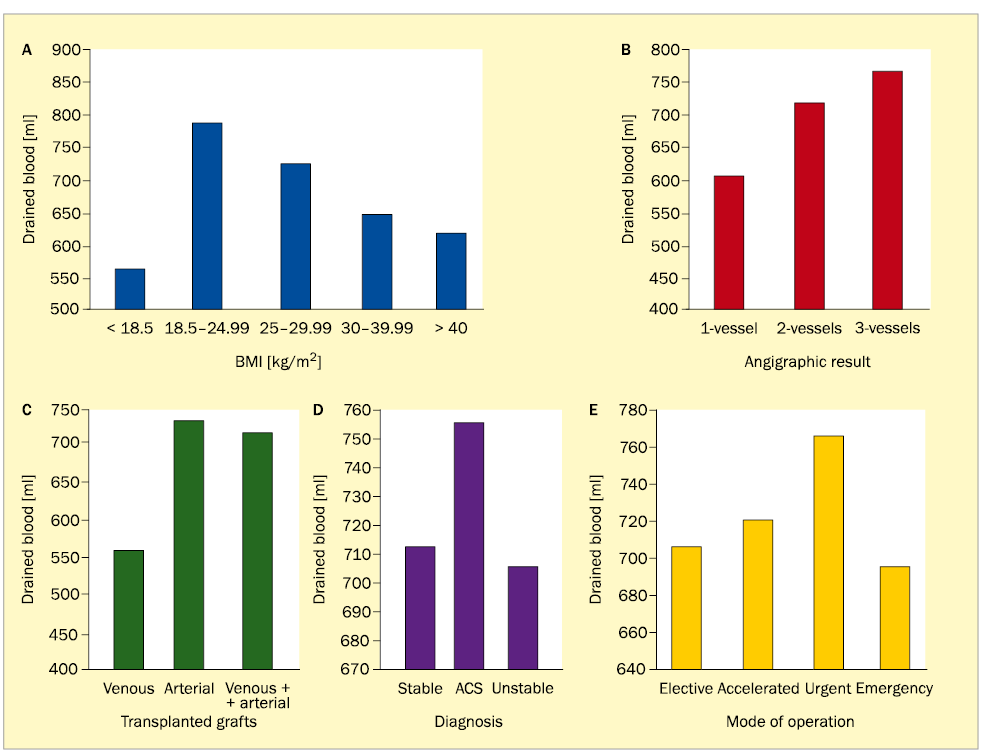 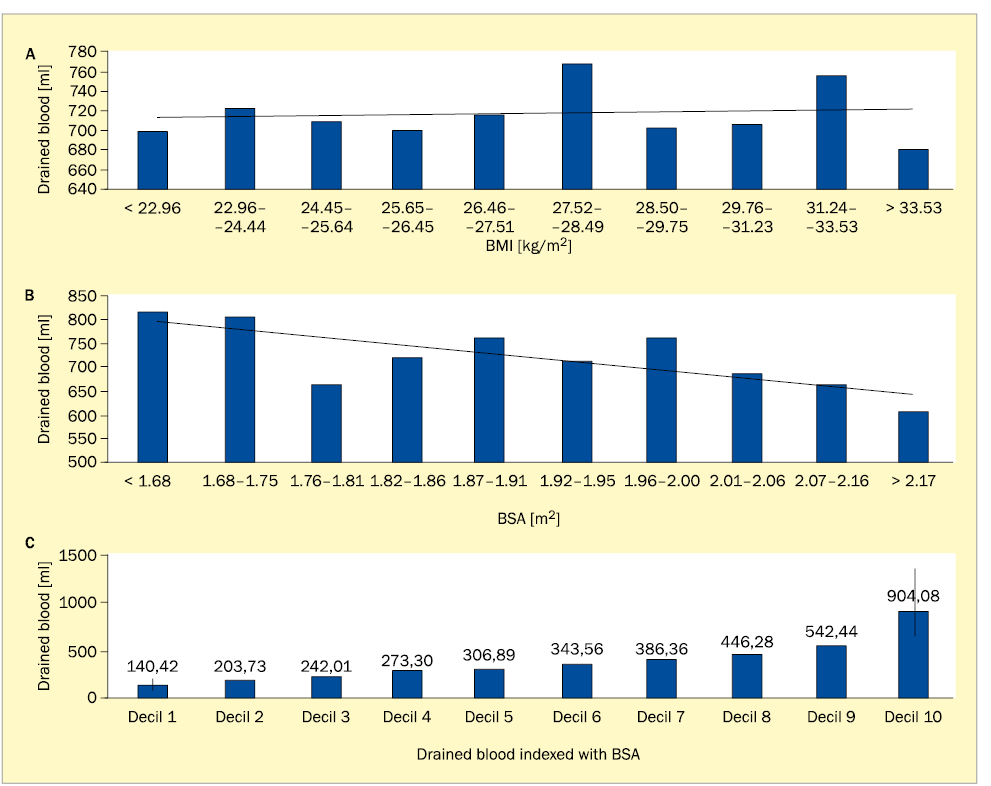 In our study, 76 patients (6%) required reoperation within 24-h due to excessive bleeding. This affects final clinical outcome of treatment as patients undergoing re-exploration due to postoperative bleeding have higher mortality and longer hospitalization [1, 4, 5]. To achieve reliable results we eliminated two risk factors. We eliminated impact of surgeon’s experience on results of treatment [7] by including into the study patients operated only by a single, experienced cardiac surgeon. Moreover, we excluded patients operated on-pump, which it is another important risk factor for postoperative bleeding [2, 4, 8].

Using LIMA to bypass the left anterior descending artery is a standard practice in coronary surgery. Such a technique has proven better both clinical and angiographic outcomes [9, 10]. Moreover, patients receiving BIMA in comparison to those receiving one internal mammary artery have decreased risk of death by 6.3% and decreased risk of reoperation by at least 8.3% in 12-year observation [11]. Using BIMA a surgeon has a chance for full arterial revascularization. It is naturally connected with more anastomosis, which also prolongs the time of operation [12] even in hands of an experienced surgeon. Such a procedure increases the risk of higher postoperative bleeding, which was shown in our study.

Patients with diabetes had also higher mediastinal drainage. Such an observation results most likely from the complications of the disease itself. In this group of patients, there can be usually found advanced and diffused CAD. Moreover, it predisposes to renal insufficiency [13], which is a postoperative bleeding risk factor itself [1]. Therefore, including that postoperative bleeding is also higher in older patients (> 75 years) [8], both parameters more often met in diabetic patients, our results supplement their clinical profile.

In our study, patients with lower BMI had higher risk for increased postoperative bleeding. Such a result is in agreement with previous results [1, 14]. Moreover, some authors showed that lower BSA is also a risk factor of higher drainage [4]. We have found that patients, whom BSA was noted in the first deciles, had higher drainage than those found in the last ones. We believe that such an observation can result from higher volume of blood in obese patients. This could be influenced by factors affecting hemostasis such as platelets and coagulation factors. It is known that obese patients with severe hemophilia (PWH) use 1.4 times more clotting factors concentrate/patient-month than non-obese patients. Moreover, in obese vs. non-obese PWH, higher level of von Willebrand factor plasma concentration, factor VIII activity, endogenous thrombin potential and plasminogen activator inhibitor type 1 levels can be found [15]. However, as shown in Figure 1, patients with BMI < 18.5 kg/m2 had also low chest tube drainage but this group is too small to analyze in comparison to other ‘BMI groups’ (0.006% of population).

Surprisingly, we have found that reoperated patients were hospitalized for shorter time in ICU. This results from higher mortality in this particular group. It is well known that such complication prolongs hospitalization in ICU and total hospitalization [16], which was confirmed in our study.

Our study has several limitations. We had missing information on aspirin admission in most of urgent and emergency operations, whereas most of elective surgeries were performed on patients receiving aspirin. Patients were qualified for reoperation when excessive bleeding was found (drainage > 200 mL/h in the first 4 postoperative hours), however the decision was also undertaken individually. This protocol of qualification to reoperation shows clinical difficulties in everyday practice. We did not analyze the impact of oral anticoagulants on postoperative bleeding as in our data base information on parameters as international normalized ratio (INR) or activated partial thromboplastin time (APTT) was missing. However, low-molecular-weight heparin (LMWH) administered before the surgery did not increase amount of drained blood within 24-h postoperatively (administered vs. not administered respectively 240 vs. 1,013; p = 0.202). We analyzed only PRBC transfusions but we did not collect information on amount of fresh frozen plasma units, platelet concentrate and coagulation factor concentrates.

Our results suggest that overweight and obese patients have significantly decreased risk of increased blood drainage. Lost blood should be probably considered an indexed parameter, however our observation needs further evaluation. Surgeons should pay special attention to patients with diabetes, patients with multivessel disease and those who had BIMA used as grafts. 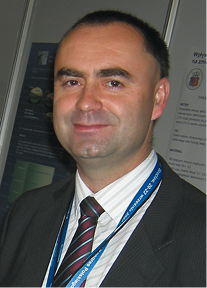