The increasing worldwide prevalence of lifestyle diseases, including cardiovascular disorders, makes preventive measures more and more important. The identification of risk factors for myocardial infarction (MI) and stroke allow for determination of people requiring implementation of effective primary prevention. This will definitely help to reduce the incidence and morbidity due to cardiovascular diseases.

In Poland cardiovascular diseases are still the leading cause of death, including a significant percentage of premature deaths. The Polish Forum for Prevention stresses the need to implement an effective primary prevention strategy at the level of the general population [1]. Metabolic syndrome (MS) is much more common among patients with cardiovascular disease, including coronary artery disease, hypertension and ischemic stroke [2–6]. Conversely, individuals who meet the criteria for the diagnosis of MS have an increased risk of developing cardiovascular diseases. A meta-analysis of 37 studies that used the definition by World Health Organization (WHO) and third report of the National Cholesterol Education Program — Adult Treatment Panel (NCEP-ATP III) found that the presence of MS increases the risk of cardiovascular events (CVEs) and death 1.78 times in total [7].

The aim of the study was to assess the prevalence of MS in the urban population of Poland and to assess which of the MS criteria (WHO, NCEP-ATP III or International Diabetes Federation [IDF]) correlate with an increased risk of nonfatal CVEs development.

The present analysis is based on the data gathered within the framework of the Project ordered by the Ministry of Health entitled: “Primary and secondary prevention and its impact on epidemiological and economic indicator in type 1 and type 2 diabetes in the Polish population” in the 1998–2000, and then extended to the follow-up study conducted in 2007–2009. Contractor for the project was the Department of Endocrinology Jagiellonian University Collegium Medicum (UJCM). The study protocol was approved by the Bioethics Committee of the Jagiellonian University in Krakow.

A random sample of 2838 participants was recruited at the baseline survey (response ratio of 47%) from the residents of the district Podgórze in Krakow. After the mean of 8.8 (standard deviation [SD] = 1.76) years the subjects who in the baseline study did not have diagnosed diabetes or did not report a history of CVEs were included in the present study (Figure 1). The final sample comprised 798 participants. 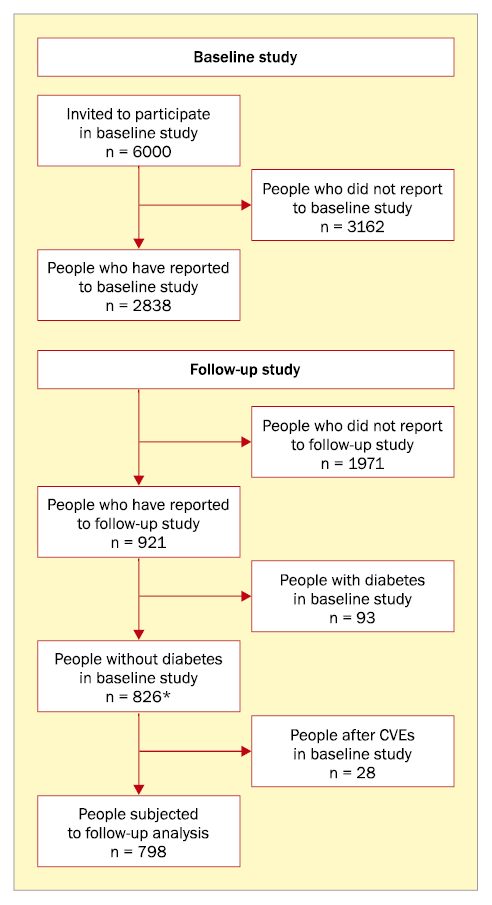 Figure 1. Characteristics of groups in baseline and follow-up studies; *2 people were excluded, because of the lack of anthropometric measurements and/or biochemical results in follow-up study; CVEs — cardiovascular events; n — numbers

In both, the baseline and the follow-up study, participants fulfilled a structured questionnaire and were invited at clinical investigation. The physical investigation included measurements of blood pressure, height, weight, waist and hip circumference. Body mass index (BMI — m/kg2) and waist-to-hip ratio (WHR) were calculated according to the standard protocol. Biochemical examination included fasting glucose (mmol/l) and insulin (µU/ml), total cholesterol, high-density lipoprotein (HDL)-cholesterol and triglycerides. For the measurement of fasting plasma glucose and fasting plasma insulin a blood sample was taken after an overnight fast. In people not treated due to diabetes mellitus type 2 (DM2) oral glucose tolerance test with testing of blood glucose and insulin at 120 min after administration of 75 g glucose was performed. Information on lifestyle and healthy behaviors, the current state of health and family history of CVEs and DM2 were obtained by the structured questionnaire.

The data obtained in the follow-up study were then compared with the data obtained in the baseline study. In order to identify people with MS, three MS definitions were used — the WHO of the 1999, the NCEP-ATP III of the 2001 and IDF of the 2005. Nonfatal CVEs defined as MI or stroke were identified on the basis of the answer to the question “Have cardiovascular disease like myocardial infarction or stroke ever been diagnosed by a doctor?“ included in the questionnaire.

Difference in baseline demographic and clinical characteristics were assessed by CVEs status with the standard methods: χ2 test for categorical variables, and t-Student or Mann-Whitney tests for continuous variables.

Incidence rates of CVEs were calculated dividing number of events by person-time at risk while the follow-up time was the number of months between the baseline visit and either the first event or last contact. Multivariate proportional hazard regression analysis was applied to model the relationship between MS status assessed by different definitions and CVEs, adjusted to age, gender, and smoking habit. The proportional hazards assumption was tested by inspecting Schoenfeld residuals [8] and found to be satisfactory.

Table 1. Anthropometric and metabolic parameters from the baseline study by volunteers without and with cardiovascular events examined during the follow-up study*

A similar analysis was performed after taking into account gender. Women with CVEs history were older, had higher waist-to-hip ratio, and MS by NCEP and IDF was recognized among them more often. Women after CVEs show higher systolic (p = 0.003) and diastolic blood pressure (p = 0.002), higher levels of LDL (p = 0.016) and lower HDL-cholesterol levels compared with the group of women without CVEs (p = 0.004). All these differences were statistically significant. In the group of men with CVEs no statistically significant differences in anthropometric and metabolic parameters in comparison with the group of men without CVEs was observed. Men with CVEs were significantly more frequently treated for hypercholesterolemia (p = 0.01) and hypertension (p < 0.003) compared with the group of men without completed CVEs. In women, these differences were not observed. In both women and men, there was a higher incidence of CVEs in subjects with previously identified MS compared with those without metabolic disorders. This difference was statistically significant (in women, p < 0.001; in men, p = 0.042). For both, men and women, the cumulative hazard of cardiovascular events related to MS by WHO, NCEP and IDF is presented in (Figures 2–4). 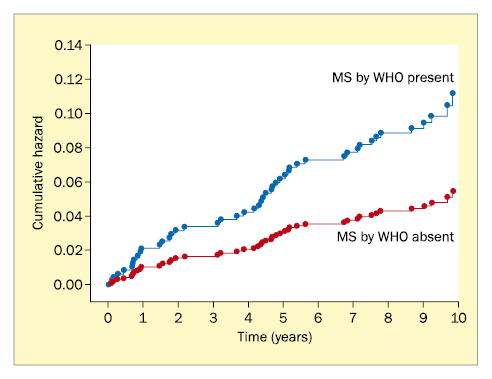 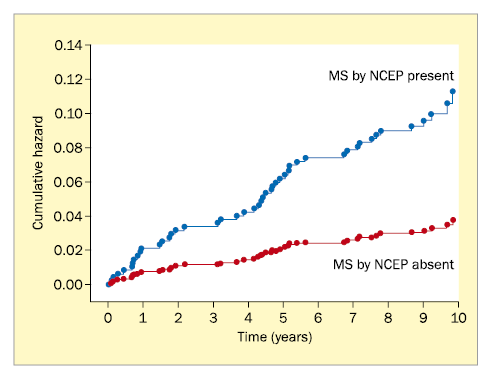 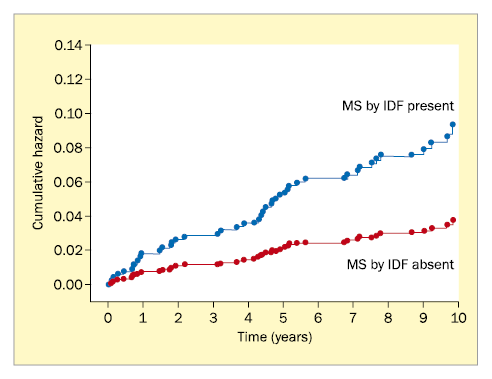 Results of the Cox regression analysis showed that the risk of CVEs was 2-fold higher in men compared with women and increased with age. These associations were statistically significant (Table 2).

Table 2. The risk of cardiovascular events related to age and gender estimated by univariate Cox regression analysis in the whole study group

In the multivariate regression model, after adjustment for age and sex, it was found that the potential factors that increased the risk of CVEs in the study group were: BMI ≥ 25 kg/m2, abdominal obesity as curtained by waist-to-hip ratio, glucose in 120’ OGTT and HDL cholesterol. These associations were statistically significant (Table 3).

Table 3. The risk of cardiovascular events associated with individual components of metabolic syndromes, standardized for age and gender. Each factor was estimated in a separate model

The greatest risk of CVEs were observed for visceral obesity diagnosed on the basis of WHR (HR 4.44, p = 0.04). For diagnosis of MS according to the NCEP and IDF criteria it was found that individuals with the syndrome was approximately 2.5 times more likely to develop CVE that individuals without the syndrome. In both cases these associations were statistically significant (Table 4).

For primary prevention of cardiovascular diseases it is necessary to search for risk factors for these diseases in the population. Many countries developed risk cards using simple parameters such as gender, age, total cholesterol and HDL cholesterol in the blood serum, blood pressure, history of smoking and type 2 diabetes. These cards estimate 5- and 10-year risk of the cardiovascular diseases development [9–11]. In the present study attempts were undertaken to assess which CVEs risk factors are valuable and at the same time simple indicators were sought, which would allow for identification of persons who need primary prevention of cardiovascular diseases in the Po­lish population.

In the study group, taking into account the three definitions of MS, the percentage of people with MS is much higher compared with other epidemiological studies [12–16]. It should be emphasized that the study group included a significant proportion of people with overweight and obesity, and that the average age was higher compared with most large population studies. Many studies have shown that MS is more common in people with obesity and in the elderly [17]. In a study of only patients with obesity, MS by NCEP-ATP III was found in 60.6% of patients. In the cited work the average BMI was 42.3 (± 7.4) kg/m2 [18].

In our work, nonfatal CVEs were observed in 5.8% of patients during the 9-year follow-up. In a Danish prospective study, in which the median follow-up time was 9.4 years and the average age of the respondents was 51 years, at the end of the follow-up, CVEs were observed in 9.4% of patients [19]. According to a Swedish prospective study, among more than 5 thousand people without DM at baseline, MI and/or stroke was observed in 6.9% of the study population during the 11 years follow-up [20]. On the other hand, in a prospective study of the Framingham Offspring Study, CVEs occurred in 6.5% of the study population, during the average 7 years of follow-up [21]. In a nationwide study performed by POLSCREEN in outpatient centers throughout the country (mean age for women 60.7 ± 11.7; mean age for men 58 ± 11.6), 16% of men and 7% of women reported in an interview MI and/or stroke. This high percentage of people with a history of CVEs in the cited study results from the analysis of only such persons who were registered by Primary Health Care for advice. The profile of the risk factors studied by this research group was also much more negative, with a large percentage of people treated for DM (16% of women and 15% men) and a large percentage of people with BMI ≥ 25 kg m2 [22].

In our study group, MS assessed by the three definitions increased risk of CVEs, but only in the case of MS according to the NCEP-ATP III and IDF this relationship was statistically significant (HR 2.78; p < 0.001 and HR 2.39, p = 0.002 respectively). In the Framingham Offspring Study a positive correlation between MS defined by NCEP-ATP III and CVEs was found [20]. Jeppesen et al. [19] found in a prospective study lasting over 9 years that MS by NCEP is an independent risk factor for CVEs. A Swedish prospective study assessed the three definitions of MS (NCEP, IDF and EGIR) in predicting CVEs. In this study, after taking into account age, gender, low-density lipoprotein and lifestyle, HR for CVEs was highest for MS according to the NCEP-ATP III (HR 1.59 95% confidence interval [CI] 1.25–2.03) [19]. In the prospective Strong Heart Study with patients with no identified diabetes, MS by WHO and NCEP-ATP III (but not by IDF) increased risk of CVEs. In patients with diabetes, MS by WHO seemed to be the most useful in assessing the risk of CVEs. The authors emphasize that the obtained data come from a population with a large proportion of people with obesity and diabetes [23]. Ahmadi et al. showed that MS (by NCEP) patients have significantly greater prevalence and severity as well as worse prognosis of coronary artery disease compared with patients with one component of metabolic syndrome [24]. Similar relationships showed Suh et al. During 8.1-year follow-up period MS (definition NCEP) was a significant risk factor for the development of cardiovascular disease although its impact varied between sexes [25]. Polish researchers who analyzed a population of more than 750 patients after ischemic stroke, found MS by NCEP in 54.3% of people, and after taking into account the criteria by the IDF 2005, in 60.8% of people. Both, the data available in the literature and our results demonstrate that the use of MS as defined by the NCEP and IDF can identify individuals at increased risk of CVEs. These people need to implement multi-primary prevention in order to prevent cardiovascular events [4]. 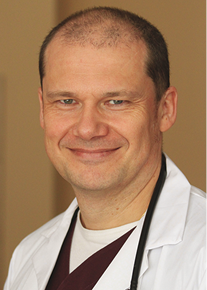 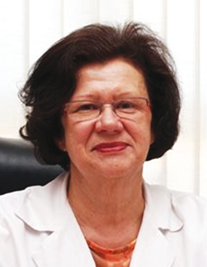