Congenital heart disease collectively labelled as functio­nally single ventricle or functionally univentricular heart is a group of most complex congenital heart defects. Their common feature is the presence of a dominant ventricle which supplies both pulmonary and systemic circulation, while the other ventricle is much less developed, often rudimentary, or even absent [1]. Single ventricle defects account for 7.7–7.8% of all congenital heart disease and are lethal without appropriate treatment. The most common form of a functionally univentricular heart is hypoplastic left heart syndrome (HLHS). Treatment outcomes in children with functionally univentricular heart have significantly improved with advances in cardiac surgery, anaesthesiology, intensive care and paediatric cardiology, particularly over the last 25 years. Patients with single ventricle undergo multi-stage cardiac surgical treatment, with the Norwood procedure or hybrid approach (cardiac surgery combined with interventional cardiology techniques) being the first treatment step. A bidirectional Glenn procedure is the second step, and the final step is the Fontan procedure, resulting in the single ventricle serving as the systemic ventricle only, while the systemic venous return is directed to the pulmonary circulation. This non-physiological hemodynamic scenario relieves the single functioning ventricle but also contributes to the development of irreversible changes in the cardiovascular system, leading to multiple complications. The rates of Fontan circulation-related complications increase with time and include systemic ventricular dysfunction, protein-losing enteropathy, plastic bronchitis, progressive atrioventricular valve insufficiency, cardiac arrhythmia, and thromboembolic complications. Systemic ventricular dysfunction begins as diastolic dysfunction and may be easily missed in the early stage [2, 3]. Magnetic resonance imaging is the gold standard for the evaluation of the single ventricle function. However, it is expensive, time-consuming, requires patient cooperation and is not widely available in outpatient settings. Echocardiography remains the most widely available, non-invasive, and reproducible diagnostic tool [4]. Echocardiographic eva­luation of the single ventricle function, particularly with the right ventricular morphology (e.g., in HLHS), continues to be a challenge for cardiologists due to its specific anatomic features which cannot be described with a simple geometric model [5, 6]. Thus, it is particularly important to use different available echocardiographic techniques for the systematic evaluation of patients with functionally univentricular heart. These techniques not only allow better investigation of the cardiovascular system but also help determine prognostic factors to guide patient management. Evaluation of the single ventricle includes conventional echocardiographic parameters such as the myocardial performance index (MPI) and tricuspid annular plane systolic excursion (TAPSE). MPI is an indicator of global ventricular function independent of its geometry and thus may be used to evaluate function of an irregularly shaped ventricle.

The role of tissue Doppler imaging (TDI) in paediatric patients with univentricular heart has been also highligh­ted. This technique, first described by Isaaz et al. in 1989, uses pulsed wave Doppler and colour Doppler to measure myocardial motion velocity. It is based on the fact the myocardial wall Doppler signal is characterized by low velocity and high amplitude, in contrast to the signal generated by ultrasound waves reflected from blood flowing through cardiac chambers. With development of Doppler echocardiography, myocardial velocity measurements became widely used for the evaluation of left and right systolic and diastolic function [5, 7, 8].

The aim of the study was to assess the relationship between conventional echocardiographic and TDI parameters in the evaluation of the performance of a functional single right ventricle in children with HLHS after the Fontan procedure.

We studied children with HLHS who underwent three-stage, palliative cardiac surgical treatment culminating with the Fontan procedure. The first step was the Norwood procedure, the second step involved anastomosing the vena cava superior with a pulmonary artery (bidirectional Glenn procedure), and the third step involved connecting the vena cava inferior with pulmonary arteries (Fontan procedure). Fenestration or a temporary connection between the tunnelled vena cava inferior and the right atrium was performed in high-risk patients. The fenestration was closed by interventional cardiology techniques within 6–12 months after the Fontan procedure. All patients were operated in the Department of Cardiac Surgery at the Polish Mother’s Memorial Hospital Research Institute in Lodz, and echocardiographic examinations were performed during scheduled follow-up hospitalizations in the Department of Cardiology at the Polish Mother’s Memorial Hospital Research Institute in Lodz.

Echocardiographic examination was performed using a Philips iE33 system with a 5MHz probe, with simultaneous ECG recording. MPI was calculated using the formula MPI = (a – b)/b, where a is the time from tricuspid valve closure to tricuspid valve opening as evaluated using a flow velocity spectrum recorded by pulsed wave Doppler in a four-chamber view, with tricuspid flow (A and E waves) recorded by placing the sample volume at the tips of tricuspid valve leaflets, and b is the total duration of flow through the neoaortic valve, measured by placing the sample volume below the valve in the parasternal short axis view (Figure 1).

Using TDI, tricuspid annulus velocity was measured by placing spectral Doppler volume at the annular attachment to the free myocardial wall. From a recording of cardiac cycle, peak early diastolic velocity (E’) and atrial contraction velocity (A’) were determined. TDI MPI was calculated using the formula: TDI MPI = (a – b)/b where a is the sum of isovolumic contraction and relaxation times (IVCT and IVRT, respectively), and b is the ejection time (ET) (Figure 2). TAPSE was measured by M-mode in the four chamber apical view by placing the M-mode interrogation line within the lateral aspect of the tricuspid annulus in the right ventricular long axis, followed by measurement of the peak annular plane excursion (Figure 3). 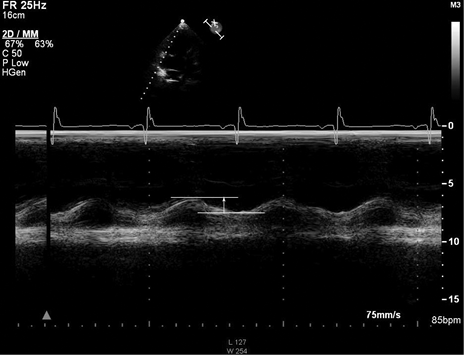 Statistical analysis was performed using Statistica 5.0 software, with p < 0.05 indicating statistical significance. Quantitative data were reported as mean values ± standard deviation, and categorical data as numbers and percentages. The number of valid measurements, arithmetic mean, minimum and maximum vales, and standard deviation were calculated for each variable. Relations between the evaluated variables were assessed using Pearson correlation coefficients, and their significance was tested using Student’s t-distribution. Differences between mean values of the evaluated variables in different patient groups were evaluated by the Student t test and non-parametric Mann-Whitney test. Snedecor’s F-distribution-based analysis of variance tests were also used to compare mean values of the evaluated variables in different groups.

We studied 34 children (27 boys and 7 girls) with a functionally single right ventricle. Detailed patient characteristics are shown in Table 1.

The mean patient age at the time of the third stage of cardiac surgical treatment, i.e. the Fontan procedure, was 5.21 years. In most children, an extracardiac tunnel was created (32 patients, 94.1%) and fenestration was performed during the surgery (32 patients, 94.1%). Cardiac arrhythmia was not recorded in any children either on ECG or during echocardiographic examination, and first degree atrioventricular block was observed in two patients. Values of the evaluated echocardiographic parameters are shown in Tables 2 and 3.

In our study group, we found significant relations between:

We did not find significant correlations between the E’/A’ ratio and other evaluated echocardiographic parameters.

The importance of TDI in the evaluation of left and right ventricular systolic and diastolic function in children has increased [9–11]. However, few studies were performed to evaluate utility of TDI for the evaluation of systemic ventricular function in paediatric patients with functionally single ventricle. Available studies indicate significant systolic and diastolic dysfunction of the single ventricle compared to the control group, even if conventional echocardiographic techniques indicate normal ventricular function [12–14].

Systolic and diastolic dysfunction of the systemic ventricle as well as regional wall motion abnormalities may develop in patients with functionally single ventricle following the Fontan procedure. This is related to persisting abnormal filling of the ventricle that was previously volume overloaded. Diastolic dysfunction may be diagnosed based on a restrictive tricuspid inflow pattern identified by conventional echocardiography with calculation of the E/A ratio. However, this approach is not routinely used in children due to its dependence on cardiac preload, and thus on atrial pressure, and also due to possible fusion of E and A waves, such as during tachycardia [15–17]. In contrast to conventional echocardiography, parameters evaluated using TDI (E’, A’) are not dependent on filling pressures [18]. This may explain the absence of a statistically significant correlation between diastolic dysfunction parameters by TDI (E’, E’/A’) and conventional echocardiographic parameters (E, A, E/A) that was also found in our study. Similar results were reported by Watanabe et al. [5] who found a statistically significant correlation only in healthy children. In contrast, such a correlation was not found in patients with congenital heart disease, particularly in those with elevated right ventricular and pulmonary artery pressures. We found a statistically significant relation only between A’ and A, and between E/A and E/E’ ratios.

In addition, statistical analysis in our study did not show a significant relation between TDI MPI and conventional MPI. However, similarly to the study by Roberson et al. [10], we found slightly higher TDI MPI values compared to conventional MPI. This is due to longer isovolumic contraction and relaxation times measured by TDI, resulting in higher a values in the MPI formula. An advantage of TDI MPI over conventional MPI is related to the fact that intervals are measured during a single cardiac cycle in one echocardiographic view, which eliminates the effect of heart rate variability on the calculated parameters. Harada et al. [16, 17] found that heart rate variability during an echocardiographic examination was greater than 10% in 59% of patients.

Systolic tricuspid annular velocity measured by TDI (S’) is considered a good quantitative parameter used to evaluate right ventricular function in adults. Similarly to the study by Koestenberger et al. [19], we found a significant correlation with TAPSE. The latter evaluates systolic function of the inflow part of the right ventricle which remains relatively normal for the longest time in progressive ventricular dysfunction. Following fenestration closure, hemodynamic conditions of the Fontan circulation change, which indirectly affects systemic ventricular function. For this reason, we observed higher TAPSE values in patients with closed fenestration.

The E/E’ ratio allows noninvasive assessment of ventricular end-diastolic pressure (VEDP) and evaluation of ventricular diastolic function. According to literature data, E/E’ values above 12 may indicate elevated VEDP and impaired diastolic function [20]. In our study, E/E’ values ranged from 4.4 to 17.5, and a value above 12 was noted in 14.7% of patients. We also found a positive correlation between the E/E’ ratio and MPI.

Limitations of TDI are as follows: this technique reflects motion of only longitudinal and not circular myocardial fibres but this is not a significant limitation in the right ventricle, as its primary function is to move the atrioventricular valve towards the apex, and twisting and rotating motion is of minor importance; no angle correction is used; preload changes resulting from breathing have not been accounted for (to reduce potential bias, we averaged MPI values from three cardiac cycles).

Study limitations included a small patient sample that reduced the power of statistical analysis. The presented results are preliminary findings of our research.