Preservation of healthy functional fitness level and social usefulness of cardiac patients is a challenge of today’s cardiac rehabilitation. Contemporary standard programme according to American College of Sports Medicine (ACSM) 9th edition guidelines seems to require the extension. Several studies have described the different cardiac rehabilitation (CR) programmes in terms of the positive impact on the incidence of many chronic diseases, including cardiovascular diseases [1–4].

These findings indicate the need not only for regular intake of medications but also for the implementation of interventions aimed at lifestyle change, including increasing physical activity and modifying the dietary habits especially in patients at high risk of cardiovascular disease.

In this study, we evaluated the use of different than standard CR training programme on some elements of physical fitness level among patients early after invasive treatment of acute coronary syndrome (ACS). The assumption was that following an invasive treatment, patients would be highly motivated to implement lifestyle changes.

An analysis comprised the data of 40 patients in programme. The mean age for all was 52.78 ± 6.22 years. In the programme, 40 patients were divided into two, homogeneous groups: 20 in the standard rehabilitation programme procedures such as: calisthenics, walking and cycle ergometer training. The other 20 in the group with the standard procedures expanded with the elements of resistance training using constant ankle and wrist weights (for the arms: 0.5 kg each and for the legs: 1 kg each) during walking and calisthenics. The weights were used from the 3rd session after patient was adapted to the training with the standard programme. Patients attended 20 sessions (Table 1).

Patients were constantly monitored by EKG system during the cycle ergometer training. Patients’ heart rate during the calisthenics and walking training were constantly monitored by Polar system (Manufacturer: Polar Electro Oy, www.polar.fi). The intensity of the training during the walking training on the treadmill was increased individually by raising the speed of walk on the flat position. Average speed was 2.5 at the beginning and 4.5 km/h at the end of rehabilitation programme. 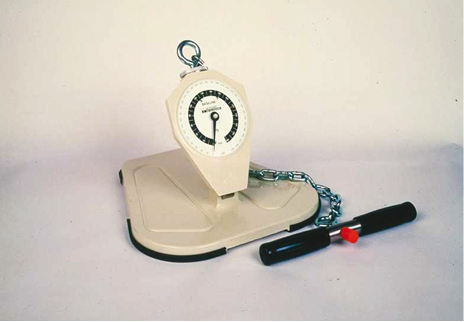 The tests were performed on the admission and at the discharge of rehabilitation programme (Fig. 2). 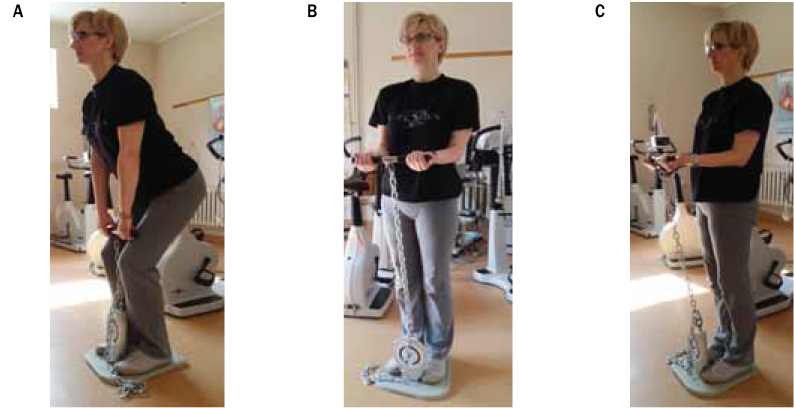 The CR programme consisted of the following:

Statistical analysis was performed using Statistica 10.0 (StatSoft Inc. Tulsa, OK 74104). The analysed results are presented as mean ± standard deviation (SD). The non-parametric test of Mann-Whitney was used to compare the 2 groups, while variables within the same group were compared using the Friedman’s analysis. A p value of 0.05 was used to determine statistical significance.

Both rehabilitation training programmes provided to the patients post-ACS improved significantly the endurance parameters assessed with the 6-min walking test. For the standard CR group, the mean distance on the admission was 518 ± 57 m and after rehabilitation 581 ± 94 m (delta was 63 m) (p < 0.05). For CR with the resistance training elements, the mean distance values were 523 ± 45 m and 598 ± 57 m, respectively; (delta was 75 m).

The total improvement in between the terms (admission I and discharge II of each group) was significant in both groups. There were no significant differences in the improvement of the distance level between the groups (different CR programmes) (Table 2).

The strength endurance assessed with the SFT (arm curl test and chair stand test) in general improved significantly during the training in both CR groups.

According to recommendations for cardiac rehabilitation summarized by the organizations like (ACSM) or American Association of Cardiovascular and Pulmonary Rehabilitation (AACPR), the largest challenge remains providing proper trainings in acute setting, not only to improve physical endurance but also affect other element of the so-called physical fitness, such as: cardiorespiratory endurance (walking cycling, stair climbing and other), strength and endurance (free weights, weight machines, resistance bands, light wrist and ankle weights) [5, 8].

There is a special need for the actions that can be safely use in home-based environment.

With the respect to the new recommendations this training model extends the endurance training with use of strength elements.

As mentioned above, in the general recommendations the use of wrist and ankle weights is being recognized as positive extension of training duration. Apparently we do not find any literature with reports based on actual use of the weights, especially in patients early after acute coronary intervention.

What we find among cardiac and pulmonary rehabilitation literature, there are training programmes extended with the resistance elements based on: weight machines [8], or general exercise with multiple repetitions [9] or elastic bands [10]. Resistance training there, is isolated from other activities, takes part 3 times a week with 3–4 exercises of often single muscles and practiced for 20 min.

Usually it is directed to the patients late (2–3 months) after the acute syndromes [8–10].

Over the past 10 years, screening the available research literature, the use of the resistance training in the rehabilitation programmes should be common. The scepticism in the medical community responsible for the implementation seems to be unjustified. In the literature there is no evidence for the pathologies or complications that occur while using resistance training: “The perception that resistance exercise is harmful to cardiac patients, or at the least is not beneficial, is not supported by the scientific literature” [5, 11].

With the respect to the doubts, this project conducted the in-patients rehabilitation group with constant medical control, also between the training sessions. Ankle and wrist weights (1 and 0.5 kg) used for the project were definitely lower resistance that recommended 50% of 1RM. Anyway, it allowed the use of it for longer time (30–45 minutes of walking training or 20–30 minutes of general exercises, 5 days a week). Recommendation statement is: 2–3 sessions a week, with 48 h break between, the load of 50–80% of 1RM and 8–12 repetition of each exercise. 1RM assessment in practice is never mentioned. From our research, 1RM is very hard to assess among patients with poor physical activity experience.

In general not only the weight but also the number of repetition of the movements is used to extend the intensity of the training [8].

In conclusion, there were no complications related to the training. None of the patients were excluded from the project. We achieved better improvement of the strength and endurance than in the standard training programme.

Its well-known fact, that any form of the physical activity, including resistance training while using the moderate loads, leads to reduction in heart rate and resting blood pressure. Resistance training also reduces the level of pain and disability resulting from degenerative processes in the joints. It improves the balance and coordination, preventing older patients from falls and injuries. In this case, it affects also the self-reliance. Finally, the increase secretion of endorphins during the training, improves the comfort of mind, preventing patients from depression [12].

In comparison, the practical value of the resistance training in everyday life, like: opening, closing the door (pushing), walking up and down the stairs, carrying shopping bags or handbag, banding over to fasten the shoes or pick up something from the floor, vacuuming, cleaning the floors, to carry children or grandchildren, driving the car, moving furniture, even chairs, gardening. These are only a few examples of the activities with need for proper strength, which we deal every day. The strength and full range of motion is necessary for proper functioning in everyday life [13].

Promoting a higher level of fitness endurance, improves range of motion, a more comprehensive weight control, increases the level of basic metabolism, beneficially affects the patients with metabolic diseases such as diabetes, and also maintains a certain level of bone density and increases satisfaction with health improvement, as programmes incorporating a variety exercises makes the training attractive for the patients and perhaps that’s why it is the argument for including elements of resistance training in the standard model of cardiac rehabilitation [14].

Based on the results of this study, the modified standard cardiac rehabilitation programme with the resistance elements is safe and provides particularly positive effect on the functional status and also the ability to perform every-day activities.

It must be mentioned that modified form of the training that was examined in this research was defined as more attractive for the patients and simple in use — in other words, more suitable for use in the every-day life. This study, conducted on the patients after acute coronary syndrome, indicates that this form of training can be safely used on a large scale in the area of rehabilitation and medical tourism in health prevention programmes.

Due to logistical issues, the study included only men after ACS.

It should also be noted that the study was performed only in patients at moderate risk of developing another episode of cardiac disease according to ACSM 9th edition risk stratification [8].

Expanding the standard programme of early phase cardiac rehabilitation in patients after ACS with the elements of resistance training results in greater improvement, especially in the elements of strength. The improvement for the resistance training group was more evident compared with standard training programme. We also observed the tendency to a greater improvement in the other functional fitness elements like: flexibility, coordination and cardio-respiratory endurance and higher level of satisfaction (which may be a good motivating factor). We find the use of weights as suitable for home-based continuation of the rehabilitation programme. 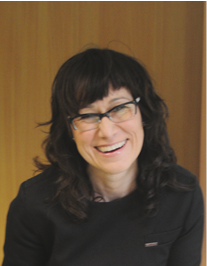 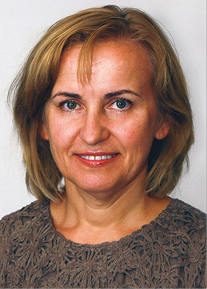