Bruck syndrome is an autosomal recessive syndrome consisting of bone fragility and congenital joint contractures. According to the genotype, it has been classified into types 1 and 2. Recently, mutations in FKBP10, localised to chromosome 17q21, have been identified in some patients of Bruck syndrome. Twenty-seven patients of this syndrome have been reported so far. We present a new patient of this syndrome, with frequent fractures, congenital joint contractures, kyphoscoliosis, bilateral clubfoot, and pectus carinatum. The clinical and genetic features of all previously reported cases are also reviewed.

Bruck syndrome (BS) is a very rare syndrome in which bone fragility is associated with congenital joint contractures. It has been considered as an autosomal recessive form of osteogenesis imperfecta (OI) [1].

In 1989 Viljoen et al. reported five children with frequent fractures and arthrogryposis multiplex [2]. Because the same disorder had been reported by Dr. Bruck in 1897 [3], Viljoen et al. suggested that the disorder be called Bruck syndrome. To the best of our knowledge, 27 cases of BS have been reported in the literature so far. The first mutations discovered in BS patients were PLOD2 mutations, but evidence for the role of chromosome 17 in Bruck syndrome has lead to identifying the FKBPIO gene as a responsible locus [4-6].

The FKBPIO gene has been located on chromosome 17q21.2 and contain 10538 base pairs and transcript to a 2888bp mRNA with 11 exons, which encodes a protein with 582 amino acids that belongs to the FKBP-type peptidyl-prolyl cis/trans isomerase (PPIase) family. FKBPIO contains four sequential peptidyl-prolyl cistrans isomerase (PPIase FKBP-type) domains at N terminal and 2 EF-hand domains (calcium-binding domain) at C terminal. This protein is known as a molecular chaperone and is located in the endoplasmic reticulum [7]. The ability of FK506 Binding Protein 10 (FKBPIO) to act as a collagen chaperone justifies its role in the pathogenesis of osteogenesis imperfecta [4, 8]. Recently, mutations in FKBPIO have been detected in a few BS patients. FKBPIO mutation is associated with phenotype heterogeneity [9].

In the present article, a case of BS with novel mutation in FKBPIO is reported from Shiraz, Iran. A brief review of clinical and genetic characteristics of all previously reported cases of BS will be discussed.

Report of the case

The patient was a four-year-old girl, the second child of a first cousin consanguineous marriage from healthy Iranian parents. She was the product of a normal pregnancy born by caesarean section due to abnormal foetal presentation. She had good Apgar scores at birth and a birth weight of 2700 grams. Another child of the family is a normal boy.

Immediately after birth, contracture of both knees and elbows were detected.

In physical exam, she had short stature (height at 4 years of age was about 94 cm, between 3rd and 10th percentiles), white sclera, normal teeth, normal hearing, no dysmorphic facial features, mild pectus carinatum, kyphoscoliosis, bilateral contractures and pterygia of knees and elbows, mild bilateral clubfoot, and overriding of second and third digits of the right foot. Her cognitive function was normal (Fig. 1). 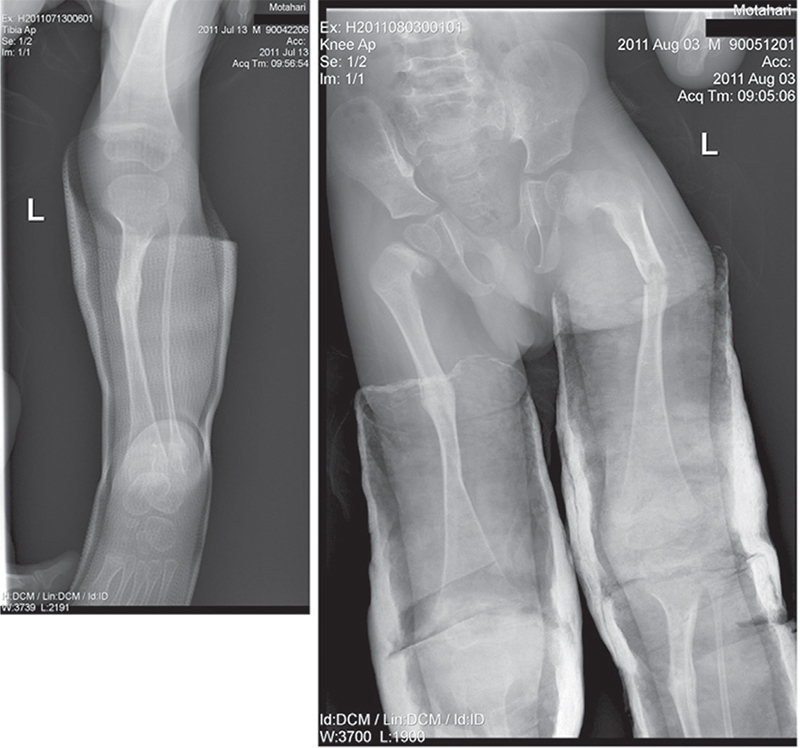 Radiographic evaluation showed signs of old fractures in both lower and left upper extremities. Skull X-ray was normal without visible wormian bones. There was no positive family history for congenital joint contracture or frequent fractures.

Since she was three years old, intravenous pamidronate (1 mg/kg/day, for 3 consecutive days) was started every three months, and frequent castings were applied to decrease joint contractures.

After one year of treatment, she had only one fracture, with slight improvement of joint contractures.

Genetic study with the impression of B.S. was performed for the patient and her parents with informed consent at the Collagen Diagnostic Laboratory, University of Washington. No mutation was identified in the PLOD2 gene. Sequencing the FKBP10 gene revealed a homozygous mutation in the FKBP10 gene, which consisted of a deletion of a single cytosine nucleotide (del C) and an insertion of three adenine nucleotides in exon 1 (ins AAA) c.204delCinsAAA and/or p.His68Glnfs*92, which corresponds to a net gain of two nucleotides. This leads to a reading frame shift and the creation of a premature termination codon downstream in exon 3. This mutation has not been detected previously, and this is the first case with this mutation. Informed written consent was taken from the parents before submission of this report. 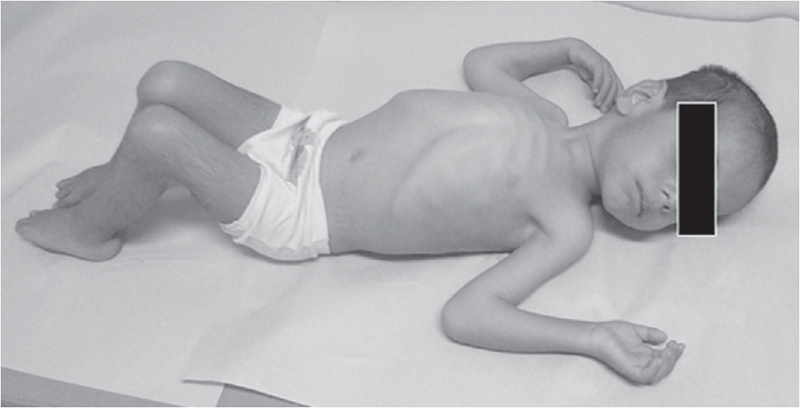 Bruck syndrome was first reported by Dr. Bruck in 1897 [3]. Viljoen et al. in 1989 reported five children with multiple fractures and congenital joint contractures, and they suggested that this disorder be named Bruck syndrome [2]. FKBP10 mutation causes phenotype heterogeneity. It is a cause of osteogenesis imperfecta with different severities and also a cause of B.S. [8].

The first PPIase domain in FKBP10 protein contains 89 amino acids (from codon 62 to codon 150). Exon 1 of FKBP10 gene has 349 bp lengths and encodes 81 amino acids, this region is a conserved sequence and codes part of the first FKBP-type peptidyl-prolyl cistrans isomerase domain. Insertion of AAA instead of C in position 204 of cDNA and codon 68 of protein sequence substitutes histidine with glutamine residue, but translation with reading frame shift continues to codon 158 in exon 3 and then termination codon due to this mutation makes a premature peptide chain [7].

So this mutation is located around the beginning of the first PPIase FKBP-type conserved domain, and it seems to lead to a radical transformation in peptide structure and folding and results in loss of function of FKBP65 protein, which in turn has several effects: secretion of type 1 procollagen is delayed, the stabilisation of the intact trimer becomes incomplete, and hydroxylation of the telopeptide lysyl residue, which is involved in intermolecular cross-link formation in bone, is decreased. The clinical effects of these molecular changes are short stature, high incidence of joint contractures, frequent fractures, and scoliosis [5, 6]

BS has been classified into types 1 and 2 [9]. BS type 2 has been linked to mutations in PLOD2 [10, 11]. The aetiology of type 1 BS has not been determined, but it has been linked to chromosome 17, possibly region 17 P12 [12]. Recently, mutations in FKBP10, localised to chromosome 17q21, have been identified in some cases of BS [9]. These mutations are also associated with some cases of autosomal recessive osteogenesis imperfecta without arthrogryposis. Therefore, FKBP10 mutations have diverse phenotypic features, including osteogenesis imperfecta with or without congenital joint contractures [6, 11]. BS is defined as congenital joint contractures associated with multiple fractures; therefore, our patient has clinical criteria of BS, but she has no specific clinical finding that can be attributed to the novel mutation in FKBP10. Researchers that have reported BS patients with mutations in FKBP10 have not found any specific clinical difference between these patients and other BS patients. Schwarze et al. identified 38 cases of osteogenesis imperfecta with FKBP10 mutations. They also found that there is remarkable variability in phenotype even within families [4, 5, 9].

So far, to the best of our knowledge, at least 27 cases of BS have been reported. Clinical features of BS are the same in different genotypes [10]. In addition to multiple bone fractures and congenital joint contractures, patients commonly have short stature, skull wormian bones, and kyphoscoliosis.

Most but not all of the cases had normal teeth, white sclera, normal cognitive functions, and normal hearing. A few cases had dysmorphic features including triangular face and brachycephaly [13-19]. Most BS cases treated with pamidronate had good to fair response. Therefore, pamidronate therapy with the same doses used in OI is recommended for these patients. Important clinical and genetic features of all reported cases of BS are presented in Table I [20, 21].

According to the expanding number of cases of Bruck syndrome, it is necessary for physicians to have more information about clinical and paraclinical aspects of this disorder.

It is recommended that patients with multiple fractures and joint contracture have detailed clinical and paraclinical evaluation for detection of this disease.