Aortic stenosis (AS) leads to severe left ventricular (LV) hypertrophy and impaired relaxation of the LV, resulting in LV diastolic dysfunction [1]. In advanced-stage AS, the contractile functions of myocardial cells are reduced and LV systolic functions are impaired. The subsequent chronic pressure and volume overload into the LV adversely affect the functions of the left atrial (LA) and the LA appendage (LAA) [2, 3].

Transcatheter aortic valve implantation (TAVI) has emerged as an alternative method of surgical aortic valve replacement for symptomatic patients with severe AS and with very high or prohibitive operative risks [4]. Recent studies that used speckle-tracking echocardiography reported an improvement in some LA functions after TAVI in high-risk AS patients [5–7]. Although the beneficial effect of TAVI on clinical and echocardiographic hemodynamic parameters is well known, there are no data in the literature regarding the effect of this procedure on LAA functions. In this study, the functions of the LAA were compared before and approximately 1 week after the TAVI procedure pulsed wave (PW) Doppler and the tissue Doppler imaging (TDI) with transesophageal echocardio­graphy (TEE) technique.

Study design and patient selection: This study enrolled 78 consecutive patients from January 2011 to December 2014 who had symptomatic aortic valve stenosis New York Heart Association (NYHA) functional class ≥ II and documented calcific aortic valve stenosis, with an initial aortic valve area (AVA) of < 1.0 cm2 (or an AVA index of < 0.6 cm2/m2) and a mean pressure gradient of > 40 mm Hg or a jet velocity of > 4 m/s, as measured by transthoracic echocardiography (TTE). The patients were deemed high risk based on the Society of Thoracic Surgery (STS) score of ≥ 10%, a logistic EuroSCORE of ≥ 20%, or agreement by a multidisciplinary heart team that frailty and/or coexisting comorbidities would be associated with a high surgical risk [8, 9]. The study’s exclusion criteria were the following: a congenital unicuspid or bicuspid aortic valve, an acute myocardial infarction, a transient ischemic attack, or a stroke within previous 6 months. Additional exclusion criteria were any permanent neurological defects, severe renal insufficiency, a pre-existing prosthetic heart valve or a prosthetic ring in any position, more than moderate (> 3+) mitral regurgitation or aortic regurgitation, untreated clinically significant coronary artery disease and a documented LV ejection fraction (LVEF) below 30%. In patients with a thrombus or severe spontaneous echo contrast (> 2+) in the LAA, which is a contraindication for the TAVI procedure, were excluded from this study. After the initial evaluation, 23 subjects were excluded from further analysis. Finally, 55 patients were included in the study. Patient demographics and medical history were obtained by the attending physicians. The Edwards Sapien XT transcatheter aortic valve system (Edwards Life Sciences, Irvine, CA, US) was used in all cases, with the patients under general anesthesia. The study complied with the Declaration of Helsinki, and the trial protocol was approved by the Institutional Ethics Committee of the hospital.

All the patients underwent TTE and TEE (General Electric Vivid 7 GE Vingmend Ultrasound AS, Horten, Norway) before the procedure and again the first week after TAVI, according to the recommendations of the American Society of Echocardiography [10–11]. Two independent experienced physicians who were blinded to the patients’ clinical characteristics performed all the echocardiographic measurements. The patients’ blood pressure was measured prior to all of the procedures.

LV systolic function was assessed by calculating the patients’ LVEF with 4-chamber Simpson’s method. LV diastolic performance was evaluated using PW Doppler and TDI. The LV diastolic inflow velocities were obtained from the apical 4-chamber view by placing the sample volume at the level of the mitral valve tip. Peak early diastolic flow (E) and peak atrial filling flow velocities (A) were measured. TDI of the velocities of longitudinal mitral annular motion were recorded at the septal and lateral mitral annular borders, the average of the results obtained. The early diastolic (Em), and late diastolic (Am) Doppler tissue velocities of the mitral annulus were measured, and the ratio of mitral inflow E velocity to tissue Doppler (E/Em) for both septal and lateral walls was calculated, the average of the results was obtained.

All the patients were instructed not to take water or food for at least 4 h. The patients’ oropharynx was anesthetized with a topical lidocaine 10% spray. Sedation with midazolam was used if needed. TEE was performed with a 5 MHz multiplane transesophageal probe. The LAA was visualized in the mid-esophageal 2-chamber view by rotation of the imaging sector from 50o to 90o. The LAA emptying and filling flow velocities were also recorded by PW Doppler, with a 2 × 2 mm sampling volume placed at the one-third proximal position of the LAA cavity. During the assessment of LAA flow, 2 blood flow velocities were evaluated. An early diastolic outflow wave observed before the electrocardiographic P wave was termed V1. Biphasic waves following V1 subsequent to the P wave were termed V2 (late emptying flow velocity) and V3 (filling flow velocity) (Fig. 1). The peak flow velocities of the V1, V2, and V3 waves were measured.

In the TDI analysis, the spectral mode of the PW Doppler sample volume of the LAA lateral wall was placed midway between the LAA tip and outlet. In sinus rhythm, 3 distinct velocities were recorded. The first positive wave after the electrocardiographic P wave was termed AM, followed by a negative wave (SM), which coincided with LV contraction, and then a positive wave (EM) during LV relaxation. A representative illustration of the LAA TDI velocities of a patient pre- and post-TAVI is shown in Figure 1. 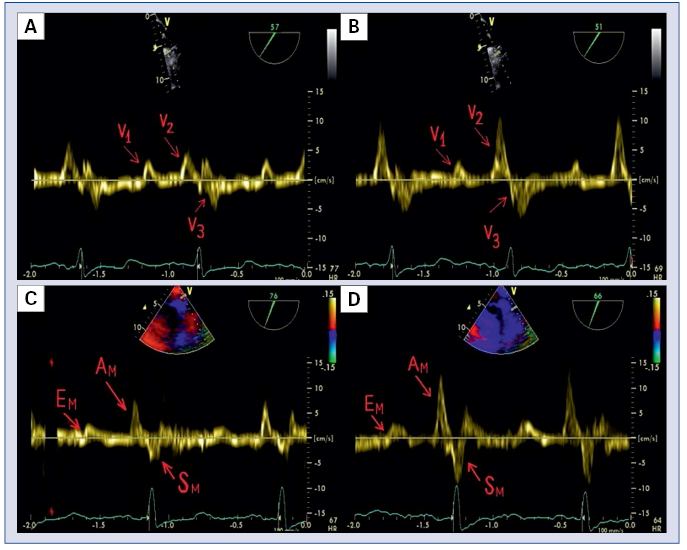 Continuous variables are expressed as mean ± standard deviation. Categorical variables were expressed as frequencies and/or percentages. The Kolmogorov–Smirnov test was used to evaluate whether the continuous variables were normally distributed. The “paired samples test” was used to compare the before and after TAVI procedure results. A p value of less than 0.05 was considered to indicate statistical significance. Statistical analyses were carried out using the Number Cruncher Statistical System 2007 Statistical Software (Utah, USA).

TTE 2-dimensional and Doppler parameters before and after the procedure are given in Table 2.

Table 2. Comparison of TTE and TEE variables before and after TAVI.

The comparison of the TEE PW Doppler and TDI parameters of pre- and post-procedural LAA functions in all the patients is reported in Table 2.

Table 3. Comparison of LAA function before and after TAVI by TEE with LVEF.

Table 4. Comparison of LAA function before and after TAVI by TEE with E/Em.

Previous studies described the beneficial effects of the TAVI procedure on clinical, hemodynamic, and echocardiographic parameters including LA and LV functions, in patients with severe AS [12–15]. However, there are no data in the literature regarding the effects of TAVI on the functions of the LAA. In this study, we used TTE and TEE to evaluate pre- and post-procedural (7.1 ± 2.8 days) LAA functions. We demonstrated, for the first time, an improvement in LAA functions detected by PW Doppler and TDI approximately 1 week after the TAVI procedure, especially in patients with marked diastolic dysfunction (E/Em > 15) and a low LVEF (< 50%).

In advanced-stage AS, volume overload, which is caused by a depressed LVEF, impairs LA and LAA functions. This impairment leads to a decrease in the LAA velocities, the LAA Doppler tissue velocities, and the mechanical functions between the LA–LAA [2, 16, 17]. LV function is an important predictor of LAA velocity. A previous study reported a relationship between a low LVEF and LAA dysfunction. Moreover, reduced LAA velocities in non-valvular atrial fibrillation and LV systolic dysfunction were presented in recent studies [18–20].

Transcatheter valve implantation offers a new treatment modality for patients who have multiple comorbidities that make conventional surgery a high risk [21]. Recent studies reported an improvement in LA functions after the TAVI procedure in high-risk patients with systolic and diastolic dysfunction [5–7]. In the present study, the amelioration of LAA functions soon after the TAVI procedure may have been due to the marked and beneficial effects of the procedure on hemodynamic and echocardiographic parameters.

D’Andrea et al. [5] have recently used speckle-tracking echocardiography to demonstrate an improvement in the LA longitudinal function of patients with severe AS 6 months after they had undergone the TAVI procedure. Spethmann et al. [7] demonstrated that a global and regional LV and LA mechanics improved 12 months after TAVI. LA function was evaluated with speckle-tracking echocardiography in previous TAVI studies [5–7]. To the best of our knowledge, this is the first study to assess LAA functions after TAVI procedure in patients with severe AS. In this study, LAA filling velocities significantly increased in the post-procedural period. Although LAA emptying velocities were elevated after the TAVI procedure in this population, the increase was significant only in the low LVEF group. Spethmann et al. [6] demonstrated an improvement only in reservoir and conduit functions in the early period after the TAVI procedure. However, their study contained no information on the relationship between reservoir and conduit functions and LVEF. In this study, a significant increase in the post-procedural LAA tissue Doppler velocities in the low LVEF group was detected.

Different studies demonstrated depressed LA or LAA functions due to LV mass, LV outflow tract gradients, and LV diastolic dysfunction [22–24]. Moreover, the functions of LA booster-pump were found to be related to symptoms of severe AS in patients with preserved LVEF [22]. Although the velocities of the E/Em and Em have a close relationship with systolic function, recent studies reported that this parameter reflected the functions of the LAA, independent of the LVEF [23–25].

In conclusion, the LA functions as a conduit of LV in early diastole and diastasis phases. Hence, it is affected directly by end-diastolic pressure and diastolic functions of the LV. The LA is also affected directly by compliance and pressure of the LV because it functions as a pump of the LV at the end of diastole [25–27]. In our study, the E/Em was decreased in the post-procedural period. In the subgroup analysis, the post-procedural LAA filling velocity, LAA emptying velocity, and mean velocities of the EM, AM, and SM were significantly higher than those during the pre-procedural period in patients with an E/Em of > 15. However, this study has not revealed any difference in the post-procedural LAA functions in patients with an E/Em of < 15.

As a result of these data, the early increase in the functions of LAA may be due to improved post-procedural hemodynamic parameters, including elevated LVEFs and improved diastolic function, especially in patients with marked systolic and diastolic dysfunction. This improvement may be expected in long-term follow-up of patients with preserved LVEFs and diastolic function, because LA and LV remodeling takes much time.

This was a single-center study with a relatively small sample size, both of which limit the power of our research findings. Lack of follow-up of the patients in terms of short- and long-term cardiovascular events and link to the patients outcomes were the most serious weaknesses of our manuscript. Moreover, the lack of long-term follow-up of the echocardiographic parameters was another limitation of the present study. As atrial fibrillation is a common arrhythmia in patients with valvular heart disease, this was not an exclusion criterion. In our study, only 6 patients had chronic atrial fibrillation, and therefore ALAA was not evaluated in these patients.

In this study, we demonstrated that successful TAVI improved the echocardiographic hemodynamic status and increased the LAA Doppler and TDI velocities, which lead to improved regional LAA function in patients with a depressed LVEF, and increased LV diastolic dysfunction. Thus, the relief of AS by TAVI may not only confer hemodynamic benefits resulting in symptomatic improvement, but also have a favorable influence on LA and LAA function.

Conflicts of interest: None declared