Coronary artery disease (CAD) is an important cause of mortality and morbidity worldwide, with important socio-economic impacts [1]. The diagnosis of CAD takes into account the presence of symptoms, risk factors and complementary diagnostic methods that generally use stress mecha­nisms, with the goal of diagnosing the presence of myocardial ischemia. Among these, myocardial perfusion imaging (MPI) using single photon emission computed tomography (SPECT) plays an important role in the diagnosis and prognosis of CAD. However, the occurrence of positive results may be due to various clinical situations beyond obstructive coronary atherosclerosis [2]. SPECT studies with non-significant perfusion defects for myocardial ischemia may represent a challenge, sometimes leading to unnecessary indication for cardiac catheterization. A recent multicenter study demonstrated that, based on current algorithms used for the evaluation of patients with suspected CAD, about 40% of patients undergoing coronary arteriography showed no coronary obstruction [3]. Coronary computed tomography angiography (CCTA) is an important method in the evaluation of the coronary arteries with high accuracy in the diagnosis and prognosis of coronary heart disease. Although coronary artery calcium (CAC) scoring has an established role in risk-stratifying asymptomatic patients at intermediate risk of CAD, its utility in the evaluation of this specifically group is uncertain [4–9]. The purpose of this study is to assess the potential of CAC in the prediction of cardiac adverse events in patients with suspected CAD with mild-moderate perfusion by MPI.

From January 2008 to July 2013, 804 consecutive patients with suspected CAD, who underwent CCTA were prospectively enrolled.

Among them, 292 patients had SPECT with non-significant perfusion deficit (defined as a summed stress score [SSS] between 4 and 12) and were selected for this study. The exclusion criteria were: known CAD, acute coronary syndrome, cardiac arrhythmia, allergy to iodinated contrast material and renal failure.

Informed consent was obtained from all patients and the Ethics Committee of the institution approved the study.

Upon admission, each individual completed a collection of standardized data on the presence of cardiac risk factors. Systemic arterial hypertension was defined as a documented history of high blood pressure or treatment with antihypertensive medications. Diabetes mellitus was defined by a diagnosis of diabetes formerly carried out by a physician and/or use of insulin or oral insulin-lowering medication. Dyslipidemia was defined as known dyslipidemia or current treatment with lipid-lowering medication. A positive history of smoking was defined as smoking or smoking cessation within 3 months of the examination. Family history of coronary heart disease was defined as the presence of CAD in first-degree relatives younger than 55 (men) or 65 (women) years of age.

All CT scans were performed on a 64-slice scanner with a 0.4 s rotation time (Aquilion multi-64-slice system, Toshiba Medical Systems). Non-enhanced CT scan for calcium scoring was performed from the level of tracheal bifurcation to the diaphragm using the following parameters: 120 KVp, 300 mA, 0.25 s, slice thickness of 3 mm, and intervals of 3 mm. The calcium scores of each area at each vessel were calculated at an offline commercially available workstation with dedicated software (Software Vitrea 2 V3.9.0.1, MN, USA) and the scores were quantified by the scoring algorithm proposed by Agatston et al. [10], and calcium scores were classified into the following categories: 0 = 0; 1 = 1–99; 2 = 100–399 and 3 ≥ 400.

Patient adverse clinical outcomes were obtained through telephone interviews and were classified as the occurrence of: 1) cardiac death, 2) myocardial infarction or 3) need of revascularization.

The demographic and clinical characteristics of the study population were expressed as numbers and percentages for categorical variables and as mean and standard deviation for continuous variables. The variables were compared using χ2 test for categorical variables and Student’s t-test for continuous variables. To satisfy the assumption that the events are independent, the recurrence of cardiac events in one participant was not included in the analysis.

Cox regression model was used to assess the value of clinical variables and CAC in predicting cardiac events. Initially, the univariable analysis of clinical characteristics and CAC measurement was performed to identify potential predictors. Hazard ratios (HR) were calculated with a 95% confidence interval (CI) as an estimate of risk associated with a particular variable. Subsequently, the multivariable analysis was performed including all variables selected in the univariate analysis. Cumulative event-free survival rates as a function over time were obtained by the Kaplan-Meier method. Cardiac event-free survival curves were compared using the log-rank test. Statistical analyses were performed using the SPSS software (version 18.0, SPSS Inc., Chicago, Illinois) and p < 0.05 was considered statistically significant.

At enrollment, 334 patients were initially selected, but 16 were excluded for indication of post-coronary artery bypass grafting (CABG) surgery and 26 for post-angioplasty evaluation. In total, 292 consecutive patients were included in the study; 64.7% were men, with a mean age of 57.9 ± 12.6 years. The general characteristics of the patients are summarized in Table 1.

Mean follow-up was 34 (range 3–66) months, carried out in 264 (90.1%) patients. To determine whether loss at follow-up would influence the results, we performed a comparative analysis between the groups with and without follow-up, and no differences regarding age, sex, smoking status, hypertension, family history, dyslipidemia and diabetes were found.

A total of 37 events occurred during the follow-up and only those with adverse clinical outcomes occurring at least 3 months after follow-up were selected. Three patients died of cardiac cause, myocardial infarction occurred in 9 patients; 25 patients underwent coronary revascularization, with percutaneous coronary intervention being performed in 23 patients, while the remaining 2 patients underwent CABG. The decision for revascularization was based on worsening of angina and/or ischemia at noninvasive testing. Univariate analysis of clinical characteristics and at CCTA to predict adverse clinical outcomes is shown in Table 1. Variables that were significant in the univariate analysis were included in the multivariate analysis. Independent predictors of cardiac events obtained in the multivariate analysis are shown in Table 2.

Table 2. Baseline characteristics of the study population according to the occurrence of cardiac events. 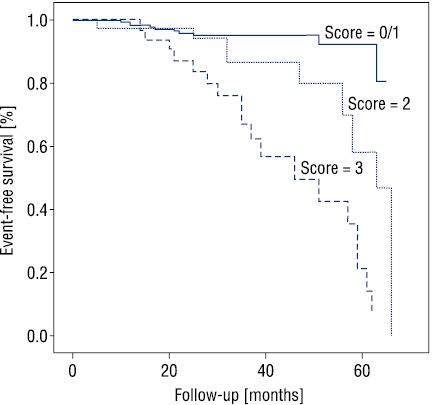 In the present study, we found that CAC score poses an incremental value in the prognostic evaluation of patients with MPI studies presenting non-significant perfusion deficit and suspected CAD.

Since its introduction over 30 years ago, SPECT has become a mainstay for assessing diagnosis and prognosis of patients with suspected CAD [2]. For patients with normal results, the rate of cardiac death and myocardial infarction are less than 1%. More extensive and severe perfusion defects are associated with up to 5% of the annual cardiac events rates [11–13]. The last subset is decidedly of high risk and favors the use of aggressive anti-ischemic therapy and consideration of coronary angiography and revascularization [14].

Patients with non significant perfusion defects (SSS < 13) represent a group at intermediate risk for the occurrence of adverse events, with rates 1–3%. Hachamovitch et al. [15] in a study involving 5,183 patients, followed by an average period of 642 days, showed that the annual rate of myocardial infarction was 0.5% in normal examinations, 2.7% had mild perfusion deficit, 2.9% for moderate deficit and 4.2% when there was severe impairment by SPECT. Doukky et al. [16], in a study encompassing 1,390 followed by an average period of 27 months demonstrated that patients with perfusion deficits in mild to moderate magnitude showed HR for adverse events of 2.3 (95% CI 1.1–4.7, p = 0.02). On the other hand, non significant perfusion defects may be related to various clinical situations, such as the presence of endothelial dysfunction (an early marker of CAD), arrhythmias and myocardial hypertrophy without concomitant significant obstructive lesion, as well as a higher rate of equivocal studies due to attenuation artifacts, movement and gating, arrhythmias, conduction disturbances, errors of acquisition and post processing [17, 18]. Given these considerations, the medical approach towards this group of patients can be challenging, requiring strategies to enable better stratification of these patients.

In our study, except hypertension, the conventional risk factors were not able to stratify these patients, which may be explained by their high prevalence, since the indication of SPECT is often associated to an intermediate pretest risk of CAD.

The presence of calcification in the coronary arteries is equivalent to the presence of atherosclerosis, which can be measured noninvasively using a CT [19]. The assessment of CAC is based on a non-contrast acquisition of a series of axial CT cuts with a 3 mm thickness covering the whole extension of the heart, with radiation doses from 0.9 to 1.1 mSv, defined as a hyper attenuating injury with signal intensity above 130 HU and area of (at least 1 mm2). Several population studies have shown that CAC score correlates significantly with the occurrence of major cardiovascular events in the monitoring of medium and long term [20–23]. Its use as a diagnostic tool, however, is more controversial, and although it represents an excellent NPV in the exclusion of obstructive CAD (96–100%), its positive predictive value (PPV) is moderate, which has been shown by more recent studies, particularly in younger patients or populations with a high prevalence of significant CAD. In addition to inappropriate PPV, CAC score also has insufficient NPV to exclude the presence of significant obstructive disease [19, 24].

Several studies have demonstrated the additive role of CCTA in patients undergoing SPECT. Abidov et al. [25] demonstrated the ability of re-stratification in patients with normal, abnormal or inconclusive SPECT regarding studies with normal coronary arteries, non-obstructive CAD and significant CAD (> 50% stenosis) by CCTA. In this study, c.a. 53% of patients with abnormal exams by scintigraphy showed normal coronary by CCTA. Cole et al. [26], in a study investigating 206 patients with SPECT showing non-significant perfusion abnormalities, as well as equivocal or inconclusive studies, have shown that only 32% of these patients underwent catheterization based on the results of the CCTA. However, this algorithm expresses a concern related to overexposure to radiation and a load of iodinated contrast, especially when patients are subjected to all 3 procedures (SPECT, CCTA and subsequent coronary angiography). Thus, the introduction of the CAC score, non-invasive method with low cost and radiation exposure and without contrast, may allow better diagnostic strategy in these patients. In our sample, the high NPV of the CAC score suggests that this method could be useful in prognostic stratification of these patients.

Among the limitations of this study, we mention the low rate of events, as well as a wide spectrum of different conditions associated with the examination indication. The exam results have the potential to influence the decision of revascularization indication and can change the outcome in this study. However, we considered an adverse clinical outcome only those that occurred after 3 months of follow-up (mean 34 [range 3–66] months). After this period, the indication for CABG was based on clinical decision, according to established guidelines. Nevertheless, the results of exams may be a confounding factor, being associated with the revascularization outcome. Studies of MPI were referred from different institutions, and this may be a cause of potential variability in the results. However, we believe that it may reflect the daily clinical practice more reliably in the real world. Furthermore, the study population was small, and studies performed on larger samples are clearly necessary to confirm these results.

In conclusion, CAC score carries a strong prognostic value in predicting adverse events in patients with suspected CAD and myocardial perfusion scintigraphy with mild-moderate perfusion defects and may be useful in risk stratification of these patients.