Levels of anxiety and depression as predictors of mortality following myocardial infarction: A 5-year follow-up

Post-myocardial infarction (MI) depression is a highly prevalent disorder, affecting nearly 18% of all MI patients [1, 2], and it is a major predictor of disability in the year post-MI. Moreover, the question arises whether depression following MI is a risk factor for cardiovascular morbidity and mortality. Although the number of positive studies in this field has been growing steadily, the discrepancies have continued since the publication of a few negative results [3–9]. Scant studies have reported longer-term mortality data in MI patients; whereas one has found an association between an in-hospital depression and mortality 5 years later [10], the other has observed no association at 3-year follow-up [11]. Although symptoms of depression and anxiety overlap, little is known about how anxiety affects mortality, with reports of both positive and negative effects [12–15].

These apparently conflicting results prompted us to find an answer to the following question: “Is there any association between depression and the cardiovascular mortality following MI”? We had previously found that depression or anxiety would not predict a subsequent increase in mortality during a 24-month follow-up period after MI [8]. We sought to expand this analysis by: comparing case-level anxiety, depression, and comorbid anxiety and depression as predictors of long term mortality during a 5-year follow-up period after MI; and investigating the role of potential modifying and confounding factors.

Between 2005 and 2010 all consecutive patients admitted to the coronary care units at Razi Hospital (Mazandaran University of Medical, Ghaemshahr, Iran) and Fatemeh Zahra Hospital (Mazandaran University of Medical, Sari, Iran) who met established criteria for MI were eligible for inclusion in the study. Patients were included if they met World Health Organization criteria for MI during their hospital admission [16]. Patients were excluded from the study if MI was the result of coronary artery bypass graft surgery or angiography, if they had another medical condition likely to lead to death within the next 5 years and if they were unstable medically to complete the assessment even with assistance from the researcher. There were no age or gender restrictions. The study was approved by the ethics committees of the hospitals and was conducted in accordance with Helsinki Declaration.

Patients meeting the inclusion criteria were asked to participate as soon as they were medically stable and had been informed of their diagnosis, on average 6 days after their MI (range 2–15 days). After explaining the study and obtaining written informed consent, a research psychologist (investigator) conducted all baseline interviews which gathered routine demographic data, including age, gender, education, current partner status, history of smoking and alcohol use, history of thrombolytic therapy and any past medical history, including history of cardiovascular disease, diabetes mellitus, hypertension and past psychiatric history. Patients also completed a series of questionnaires. The 21-item self-report Beck Depression Inventory (BDI) whose validity and reliability has been previously approved in Iran [17, 18] was used to assess the then current depressive symptoms. Scores of 10 or higher were considered to indicate the presence of mild to severe symptoms of depression [19]. Anxiety was assessed with the Persian version of the Spielberger’s State-Trait Anxiety Inventory (STAI). The Persian version of STAI had been used in previous studies and its validity and reliability had been approved [20, 21]. The STAI, which comprises two self-report scales, was used to assess state anxiety. Scores of 40 or higher indicated the presence of anxiety symptoms [22].

The main outcome of this study was a 5-year cardiac mortality. We tested the BDI × STAI interaction effect in addition to the BDI and STAI main effects. Employing these cut-offs, four groups were identified for the analysis: case-level anxiety only, case-level depression only, case-level comorbid anxiety and depression, and a reference group scoring below case-level on both scales.

Data were analyzed using SPSS for Windows, version 20. All statistical tests were 2-tailed; p values < 0.05 were considered statistically significant. Categorical variables were compared using the χ2 statistic or Fisher’s exact test, if necessary. Continuous variables were compared using independent sample t-tests. The key outcome was cardiac mortality after MI. Cox regression models were used to quantify associations between anxiety, depression and mortality, for investigation of confounding/mediating factors all demographic, clinical, and psychological variables that differentiated patients who died from those who survived were entered into a regression model. The same analyses were constructed for the dichotomized BDI (BDI score < 10 or ≥ 10, respectively) and state anxiety scores (dichotomized as < 40 and ≥ 40).

Results are presented as hazard ratios (HR) with 95% confidence interval (CI). Individuals still alive at the end of the follow-up comprised a common reference category.

Baseline characteristics as a function of BDI or STAI status

Tables 1 and 2 show the baseline demographic, clinical and psychological information for participants with relatively high scores of depression and anxiety compared to those with relatively low scores during their hospital admission after acute MI. At entry, BDI score of 192 (67.4%) patients was ≥ 10 and 145 (50.9%) cases had STAI score ≥ 40, respectively.

There were several differences between the groups: those with high BDI scores were more likely to be female, to have hypertension, diabetes or history of a previous MI, less to be current smokers, and to have lower educational level. Anxiety was significantly associated with hypertension and lower educational level. Aside from a substantial association with state anxiety, BDI status was linked only to sex and diabetes in univariate analysis; women and patients with diabetes were more likely to register BDI scores ≥ 10.

Mortality and depression and anxiety disorders

Of the 285 completed baseline assessments, 274 were traced on 5 years of follow-up. Of the 274 patients whose survival data were available, 91 (33.2%) died. Non-participants (patients who did not participate in the follow-up) were heterogeneous but did, on average, have poorer health than the participants. Comparison of the 91 dead subjects with the 183 living cases at the time of final assessment has been summarized in Table 3. Females were more likely to die, and the patients who died during the 5-year follow-up period were significantly older than those who survived, had more history of previous MI, received more thrombolytic therapy in the Index MI and had significantly higher BDI scores.

Table 3. Baseline demographic and psychological data of patients who survived and died during the follow-up. 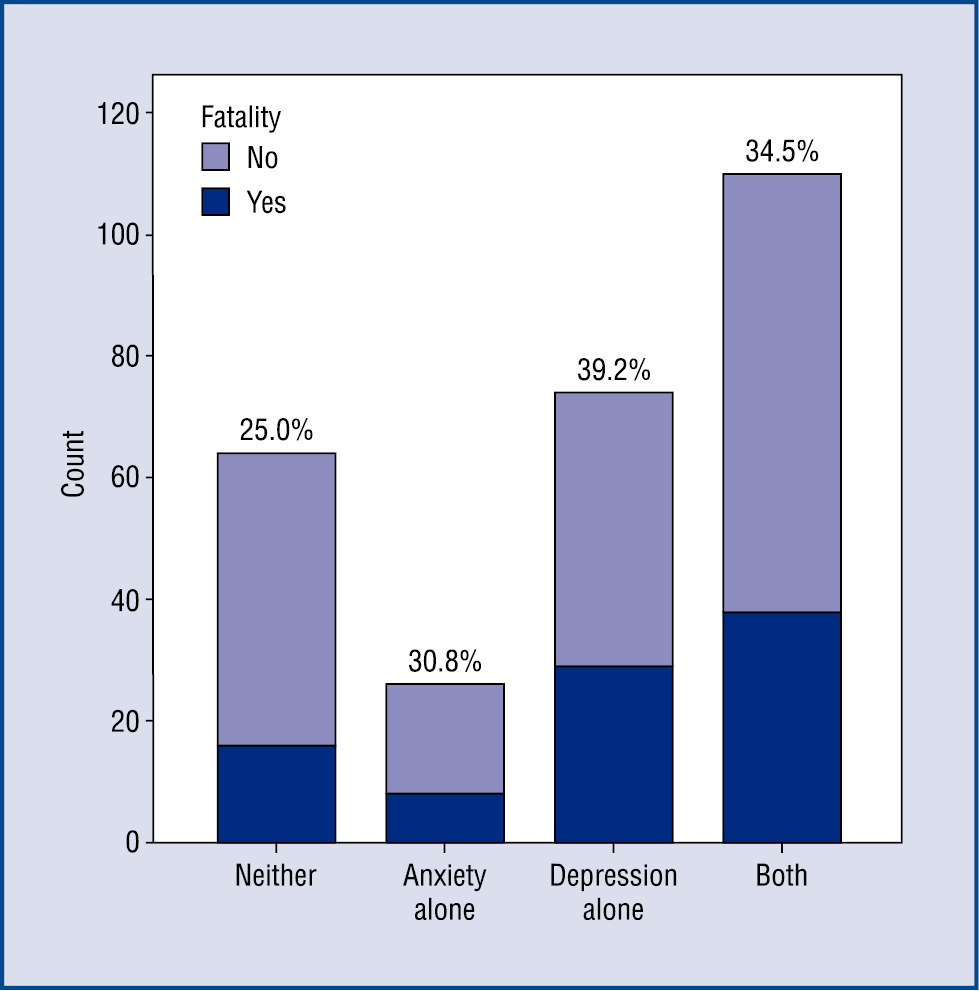 In the present analysis, anxiety was not associated with mortality, whereas depression significantly predicted death, but this association was abolished with full adjustment. Our finding of stronger mortality association in female participants between depression and mortality contrasts with the previously reported stronger effect in men than in women [23, 24].

A number of previous studies have evaluated both anxiety and depression disorders and mortality in MI patients. High depression and anxiety values have both been shown to predict subsequent mortality [3, 7]. However, in some cases, symptoms of depression but not anxiety in multivariate models predicted mortality [5, 6], and in some, neither depression nor anxiety symptoms were found to predict mortality in MI patients [9]. Because the studies have varied in location, patient population, sample size, and the means of measuring depression, some variation in results is hardly surprising. In a previous analysis, we found that depression was not a stronger risk factor for post-MI mortality than for other causes combined during a 24-month follow-up [8]. A meta-analysis in 2004 [2] reported that post-MI depression is associated with a 2- to 2.5-fold increased risk of impaired cardiovascular outcome, and a recent meta-analysis in 2013 indicated that, although the association between depression following MI and prognosis is attenuated after adjustment for cardiac disease severity, depression remains independently associated with prognosis with a 22% increased risk of all-cause mortality and a 13% increased risk of cardiovascular events per standard deviation in depression z-score [25]. The relation of depression with cardiac mortality or all-cause mortality was more significant in the older studies (OR 3.22 before 1992) than in the more recent studies (OR 2.01 after 1992). This is despite the fact that in the recent large-scale intervention trial in MI patients with major or minor depression, the successful treatment of depression was successful in reducing symptoms, however it did not reduce mortality or the recurrence of MI over the average follow-up period of 41 months [26].

The failure of some previous studies with negative results regarding the relationship between depression or anxiety with post-MI mortality, is attributed to the prevalence of mild symptoms among their patients [4, 32]. However, 67.4% of our patients scored ≥ 10 on the BDI and 50.9% scored ≥ 40 on the STAI, indicating mild to severe symptoms of depression and anxiety, respectively.

Depression and anxiety are highly comorbid psychiatric conditions [33]. In the present study, 40.3% of total participants had a diagnosis of both depression and anxiety. More strikingly, 59.9% of those with a diagnosis of depression also had anxiety. The literature on anxiety and mortality is relatively sparse compared to that on depression. Previous studies have reported conflicting findings concerning the association between anxiety levels and mortality, which was reported as positive [12], absent [13, 14], and negative [15]. Furthermore, we found lower mortality in participants with comorbid anxiety and depression compared to those with depression alone. The latter finding is contrary to what seems intuitive, since comorbid anxiety and depression are associated with both poorer physical health [34] and more disability [35] than depression alone. We guess that low anxiety may result in reduced asking for help and reduced adherence to medications when somatic illness occurs [36], and may promote earlier identification and treatment of potentially life threatening disease and/or decrease risk behavior associated with non-disease mortality [15]. In other words, there may be an evolutionary benefit of moderate levels of anxiety, a hypothesis that needs further demonstration. These findings of differences between anxiety and depression might be an argument for maintaining the separation of the two disorders. Confounding is also unlikely since there was no apparent alteration following adjustment for the large number of covariates available for this analysis.

It should be conceded that there are a number of limitations to this analysis and its interpretation. First, our patients were hospitalized only for a few days and we did not regard the fluctuating distress reported by patients immediately after an MI as true depressive disorder. Furthermore, patients who were depressed at baseline were less likely to accept follow-up interviews than other patients. However, depression and anxiety at baseline were not related to lack of follow-up, so it is unlikely that the lack of interview data biased the results. To establish a causal relationship, we need longitudinal research combining repeated measurement of depression and its presumed pathophysiological mechanisms, followed by adequately powered, randomized trials targeting the implicated mechanisms.

In conclusion, the present analysis showed that anxiety symptoms were not associated with mortality, whereas depressive symptoms significantly predicted death, but this association was attenuated to no significance with full adjustment. In spite of non-significant results, with regard to the impact of depression and anxiety on cardiac outcome, it should be stressed that this does not mean that physicians and cardiologists can ignore depression.

This study was supported by a grant from Research Deputy at Mazandaran University of Medical Sciences.

The authors would like to thank Farzan Institute for Research and Technology for technical assistance.