Mitral stenosis (MS) still leads to significant morbidity and mortality worldwide [1]. The presence of impaired left ventricular (LV) systolic function, determined by M-mode and/or two-dimensional (2D) echocardiography (ECHO), is noted in 25–30% of the patients with MS [2–6]. Recently, in the studies using tissue Doppler imaging (TDI) [7–9] and strain/strain rate imaging [10, 11], which are more sensitive methods compared to the conventional ECHO, the occurrence of subclinical LV systolic dysfunction was confirmed even in MS patients with preserved ejection fraction (EF). The functional and/or myocardial factors, which cause impaired LV systolic function, are unclear. In the study of Lee and Lee [12], systolic dysfunction of LV was suggested to be associated with the severity of myocardial involvement in isolated mitral valve stenosis during the rheumatic attack, not with the degree of the MS demonstrated by ECHO. Furthermore, Sengupta et al. [8] showed that subclinical LV dysfunction improved following the percutaneous mitral valvuloplasty.

Isovolumic acceleration (IVA) is a new tissue Doppler parameter for the assessment of systolic function of both left and the right ventricles [13, 14]. IVA is calculated as a ratio of tissue Doppler-derived peak myocardial velocity during isovolumetric contraction (IVV) divided by the acceleration time (AT). This parameter has been validated in a variety of experimental [13, 14] and clinical [15, 16] settings. IVA remains unaffected by the changes in the preload and afterload within the physiological range [13–16]. It can detect small changes in the contractile function and is well correlated with the invasive or noninvasive measures of LV dP/dt [13, 17].

Written informed consent form was obtained from the patients following approval of the study by the institutional review board. The study was consistent with the Declaration of Helsinki.

All the transthoracic echocardiographic (TTE) examinations were performed using GE vivid S6 Vingmed system 5 (Norway, Horten) equipped with 2.5–4 MHz transducers. All the patients were examined in the left lateral and supine positions with 2D, M-mode, pulsed, and color flow Doppler ECHO. Single lead electrocardiogram was recorded continuously. An average of at least 5 cardiac cycles was obtained for all measurements.

M-mode measurements and conventional Doppler ECHO examinations were performed based on the criteria of the American Society of Echocardiography and European Society of Echocardiography guidelines [18]. Left atrial (LA), LV end-systolic and end-diastolic dimensions were measured in the parasternal long-axis views. LVEF was estimated by Simpson’s rule. Peak and mean transmitral pressures were measured via continuous wave Doppler. MVA was measured planimetrically in 2D views from the parasternal short axis and using the pressure half-time method by applying continuous wave Doppler during apical 4-chamber view of the mitral valve. The area was calculated by the mean value of 2 measurements [19]. Pulmonary artery systolic pressure (PASP) was estimated by continuous-wave Doppler imaging using the Bernoulli equation [20].

Doppler tissue ECHO was performed using transducer frequencies between 3.5 to 4.0 MHz, by adjusting the spectral pulsed Doppler signal filters until a Nyquist limit of 15 to 20 cm/s was reached, and using the minimal optimal gain. Five consecutive cycles were recorded with a frame rate greater than 150 fps. The monitor sweep speed was set at 50 to 100 mm/s to optimize the spectral display of myocardial velocities. Every effort was made to align the pulsed wave cursor so that the Doppler angle of incidence was as close to 0 as possible to the direction of these walls. In the apical 4-chamber view, the pulsed Doppler sample volume was subsequently placed at the level of LV lateral and septal basal wall at end-expiration [21]. 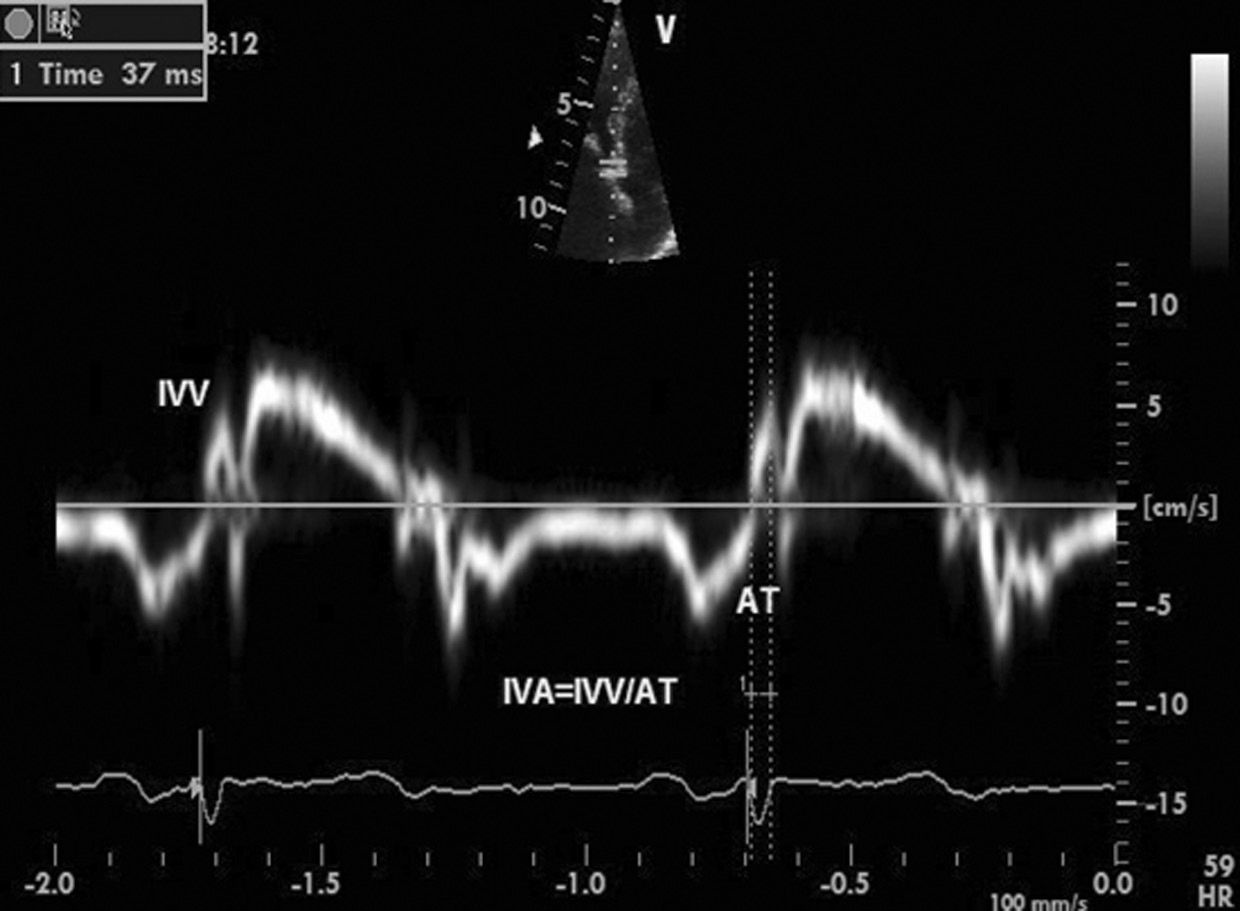 Statistical analyses were performed using the SPSS software version 17. The variables were investigated using visual and analytical methods to determine whether they were normally distributed or not. Descriptive analyses were presented as mean ± standard deviation (SD) and categorical variables were shown as percentages. Groups were compared using the Student’s t-test, Mann-Whitney U test, one-way ANOVA, and Kruskal-Wallis test (MVA, mitral valve gradient, PASP, Sm, e’, a’, IVCT, IVRT, AT, IVV). Fisher’s exact or χ2 tests was used to compare different groups. Mann-Whitney U test or Tukey’s test was performed to determine the significance of pairwise differences using Bonferroni correction to adjust for multiple comparisons. Correlation analyses were derived by using Spearman test. An overall 5% type-I error level was used to infer statistical significance.

Parameters such as age, gender, body mass index, heart rate, systolic blood pressure, diastolic blood pressure, smoking, hypertension, and diabetes mellitus were similar in both MS and healthy groups (Table 1). Of the MS patients, 52 were classified in New York Heart Association functional class I or II and 10 patients were in class III.

It is well known that MS affects the LV systolic function in various degrees. The probable causes can be listed as: chronically restricted LV filling due to the structural abnormalities in the mitral valve, increased afterload, myocardial involvement during rheumatic fever, extension of the scar process from the mitral valve into the adjacent posterior basal myocardium, restriction or tethering of the posterobasal myocardium by the scarred mitral apparatus, abnormal interventricular septal motion associated with the right-ventricular overload, and the decrease in LV compliance [2, 4]. Conventional ECHO methods such as M-mode and 2D ECHO can detect one fourth of the LV dysfunction in MS [2–6]. In recent years, the studies using TDI [3–5] and strain/strain rate imaging [6, 7] demonstrated the presence of subclinical LV systolic dysfunction, which was not detected with the conventional ECHO methods in pure MS patients with preserved EF. Since the gold standard measurement of the ventricular contractility (end-systolic elastance) requires invasive quantification [22], and most of the contractile indexes (e.g., EF, MPI, and TDI-derived velocities or strain) are highly sensitive to loading conditions, it is thought that they might not reflect the intrinsic myocardial performance [17, 23, 24].

Isovolumic acceleration is a new tissue Doppler parameter for the assessment of systolic function of both left and the right ventricles [13, 14]. It remains unaffected by the changes in the preload and afterload within the physiological range [13–16] including age, sex and body mass index [25]. It can detect even small changes in the contractile function and is well correlated with the invasive or noninvasive measures of LV dP/dt [13, 17]. Therefore, IVA can be used as a valuable and easy parameter for the quantification of global systolic function in various cardiac diseases [26, 27].

The present study shows that isolated MS may lead to significant decrease of LV systolic and diastolic function. In the studies using TDI-derived parameters, systolic velocities were demonstrated to be significantly decreased in the healthy controls, as consistent with our study [7–9]. Similar to the study by Sengupta et al. [8], Ozdemir et al. [9] demonstrated that early and late diastolic myocardial velocities were decreased in MS. On the other hand, Dogan et al. [28] did not find any differences compared to the controls. Decreased LV pre-load, impaired compliance and increased LA afterload are known changes in MS. LA size increases with the LA volume and pressure, and is associated with the initial gain in the contractile shortening. However, with progressive dilatation of the LA, which eventually leads to a threshold fiber length, atrial shortening and contractility begin to decline. Beyond the threshold, further enlargement will only result in the deterioration of atrial function. This theory was supported by decreased e’ and a’ velocities, and the presence of positive correlation between this decrease and MVA in our study. Previous study demonstrated that MPI and IVRT were increased and ET was shortened [29] in the patients with MS compared to the controls. In consistent with the previous studies, the present study demonstrated that ET decreased as the severity of MS increased and, MPI and IVRT increased independently from the severity of MS.

Even though IVV, IVA and Sm velocities decrease in the patients with MS compared to the control group, this decrease is independent from the degree of MS. In addition, the fact that the systolic parameters such as IVA and Sm velocities are not correlated with MVA and the mean gradient, though weakly associated with IVV, indicates that the LV systolic dysfunction might be caused by an acute rheumatic fever leading to myocardial damage. The results of some studies [12, 30] were consistent with these findings in that the major determinant of the LV systolic dysfunction in isolated MS is impaired contractility and not the hemodynamic factors. Lee and Lee [12] evaluated the LV myocardium of 15 isolated MS patients using electron microscopy and demonstrated structural changes in LV independent from the EF and the degree of MS, determined by ECHO parameters. However, these patients with abnormal LV function always exhibit more extensive loss of myofibrils which results from either disproportion of the mitochondria-to-myofibril ratio or myofibrillar degeneration. In the study of Bilen et al. [30], which investigated the LV systolic function of mild, moderate and severe MS patients with preserved EF, using 2D speckle-tracking ECHO-derived strain; it was demonstrated that LV longitudinal function was decreased in patients with MS compared to the controls, however, this decrease was independent from the degree of MS. In our study, LV systolic function was evaluated globally with TDI-derived IVA and similar results were obtained. Furthermore, the patients were more evenly distributed into the groups in the present study.

Tayyareci et al. [26] investigated the IVA of right ventricle in prediction of the degree of MS and demonstrated that Sm, IVV and IVA of right ventricle significantly decreased in the patients with MS compared to the control group, however, they noted that only right ventricle and IVA can predict the degree of MS. Decreased IVA of LV was shown in MS patients in our study, although it was not associated with the degree of stenosis. This discrepancy might be caused by the classification differences; since Tayyareci et al. [26] grouped the MS patients into two groups (mild-moderate and severe) instead of three (mild, moderate and severe), which was helpful in the assessment of treatment strategies. Besides, the correlation of IVA with both LA diameter and PASP might be resulted from the increase in these two parameters due to hemodynamic effects of stenosis, instead of the systolic dysfunction of LV.

The current study has some limitations. First, a small number of patients included in this study. Second, systolic function parameters were not compared with the parameters obtained from cardiac catheterization and magnetic resonance imaging. Third, the potential change in the IVA of LV was not assessed following the percutaneous balloon valvuloplasty.

In the light of these results, it is demonstrated that subclinical LV systolic dysfunction is present in all of the patients with MS and this condition is not affected by the degree of MS determined by ECHO.