Percutaneous coronary intervention (PCI) in chronic total occlusion (CTO) represents an evolving field of interventional cardiology. Since complex techniques and high support are often required, large guiding catheters inserted by trans-femoral approach are usually adopted by CTO-dedicated operators [1]. As a consequence, the majority of interventionalists who perform CTO PCI consider trans-radial approach (TRA) unsuitable for such kind of interventions. On the opposite, some dedicated trans-radial operators use to select TRA for CTO PCI. Operator’s experience with both TRA and CTO interventions is probably important for the safety and efficacy of TRA CTO. In the present study, we assessed the acute and long-term results of consecutive TRA CTO PCI performed by dedicated radial operators. Moreover, we sought to assess the impact of operator’s experience and wiring technique on procedural efficacy.

From January 2006 to May 2011, consecutive patients admitted to our Institution, undergoing the TRA as a first access, were screened to enter the present registry. Among those, PCI on CTO lesions performed by operators having a > 90% TRA rate at study beginning (“dedicated radialists” [2]) were included in the present retrospective study.

CTO lesions were defined as TIMI 0 flow within the occluded segment with an estimated occlusion duration of > 3 months [1].

Demographic, clinical and procedural data were prospectively collected on a dedicated database agreed on by all the operators of the center. Recorded procedural data included the need for access crossover defined as failure to successfully complete the procedure by the first attempted approach.

Patients with renal failure requiring dialysis were not considered for the radial or ulnar approach in order to avoid any damage to the forearm circulation. The Allen test was routinely used to screen the patient suitable for radial artery catheterization. In the case of abnormal Allen test, the Barbeau test was performed.

Trans-radial PCI technique adopted during all the study

An antegrade approach through 6 French guiding catheter was the main revascularization strategy adopted. Larger (7–8 French) lumen guiding catheters were used in a minority of patients who required an intravascular ultrasound-guided CTO proximal cap puncture. Systematic double radial approach was selected when distal vessel was not visualized by intracoronary collateral circulation. Figure 1 shows the cath lab set up at our center for a patient undergoing CTO PCI using bi-radial approach. As a general rule, the left radial approach was selected for PCI in occluded right coronary CTO while right radial approach was used for CTO located in the left coronary artery in order to gain the maximal guiding catheter support [3]. After successful lesion crossing with the guidewire, multiple balloon dilations were performed. Drug-eluting stents were then used in the majority of patients. A strategy of aggressive stent post-dilation with non-compliant balloons and full lesion coverage (with multiple stents if needed) was adopted. 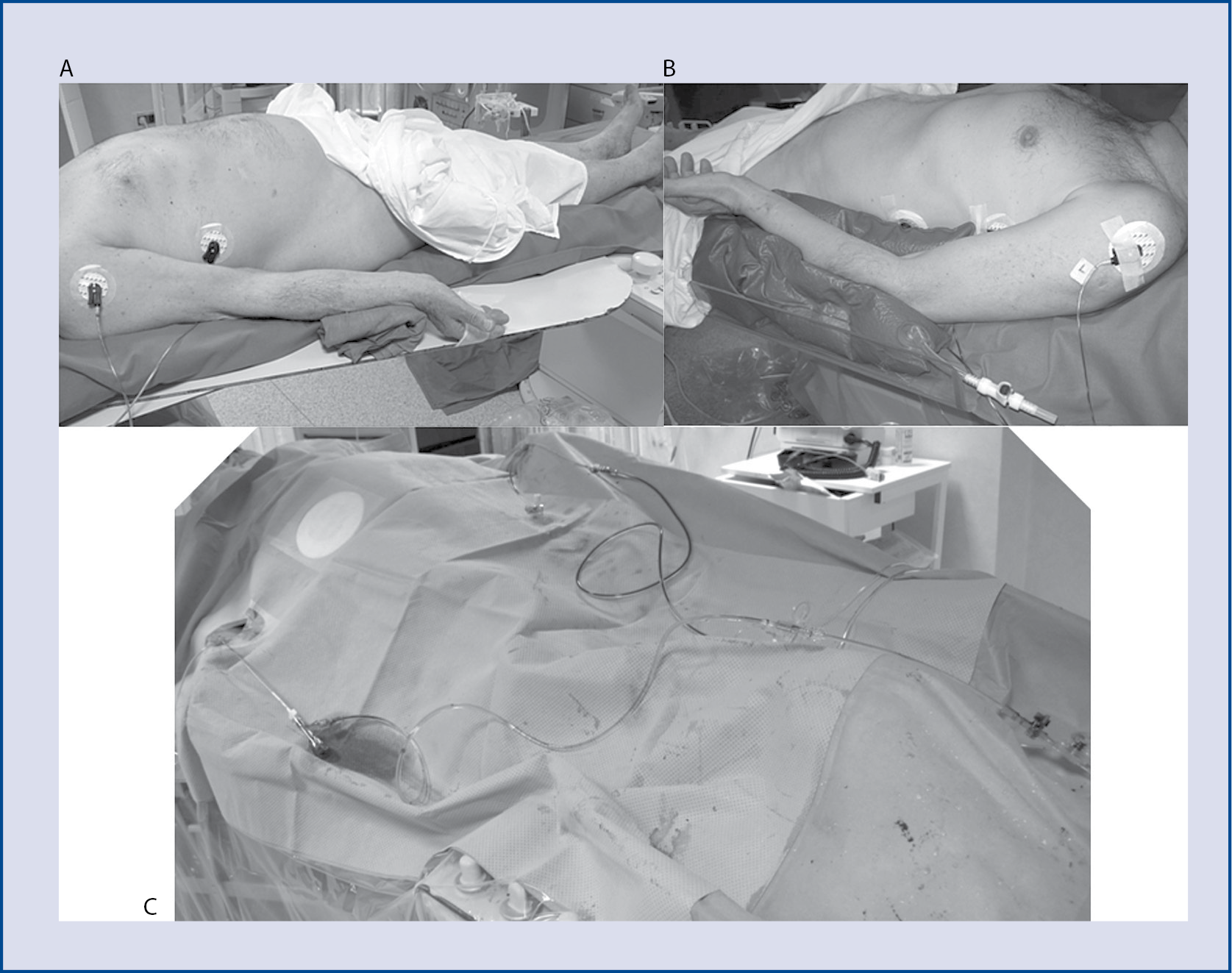 Figure 1. Patient set up for chronic total occlusions recanalization requiring bi-radial approach; A. Set up of right arm; B. Set up of left arm using a pneumatic pillow; C. Appearance of the operative table during intervention (a dedicated sterile drape with left and right radial holes is used for bi-radial approach).

All patients were on double antiplatelet therapy with aspirin (100 mg/day) and clopidogrel (300 mg loading dose followed by 75 mg/day) before PCI attempt. In the cath lab, weight-adjusted (100 IU/kg) bolus was administered through the sheath at procedure beginning and was eventually followed by further intravenous heparin boluses to maintain activated clotting time between 250 and 300 s. IIb/IIIa inhibitors were not used. Vasodilator drugs were not routinely administered and only nitrates were used in the case of documented or suspected radial artery spasm. The arterial sheath was always withdrawn after the procedure. A bandage made of a gauze pad and 3 adhesive elastic bands was used for compression. The bandage was slackened after 1 h and kept on for 4–6 h after procedures.

Although the above described general set up for PCI attempt was maintained throughout the study, a significant evolution in the specific approach for CTO lesion crossing was observed during the study. Such evolution mainly reflected a change in the strategy of wire selection. Indeed, we firstly introduced in our practice the teaching received by a Japanese expert CTO operator who recommended a specific selection of step-wise increase in guidewire stiffness and, later on, we started using a novel tapered, soft hydrophilic guidewire. During these phases, also the confidence in selecting the radial approach for CTO increased.

Such evolution allowed us to divide the study into 3 sequential phases as follows:

Study end-points were the following:

After PCI, the in-hospital clinical course was carefully monitored, whereas, after discharge, patients were followed-up by telephone or hospital visit at 9, 12, 24, and 36 months.

Major adverse cardiac events (MACE), including cardiac death, non fatal myocardial infarction (MI), stent thrombosis and target vessel revascularization (TVR) were assessed. All deaths of unknown cause were considered of cardiovascular origin. MI included post-procedural MI and MI during clinical follow-up. TVR was defined as repeat clinically driven revascularization by either PCI or coronary artery bypass grafting involving the treated vessel. Stent thrombosis was classified by the Academic Research Consortium as definite, probable, or possible, and as early (0 to 30 days), late (31 to 360 days), or very late (over 360 days) [5].

Continuous variables were checked for normality using the Kolmogorov-Smirnov test, presented as mean ± standard deviation, and compared using the Student’s unpaired t-test. Categorical variables are presented as counts and percentages, and compared by means of χ2 tests or Fisher exact test, as appropriate. A two tailed, p value < 0.05 was established as the level of statistical significance for all tests.

At the beginning of the study period, 2 operators of our institution had > 90% TRA rate. These two operators attempted 167 TRA PCI on CTO in 158 patients. Of note, most of the procedures were conducted with both operators scrubbed at the operative table.

Table 1. Main clinical characteristics of the study population and of patients belonging to Period 1 and Period 2.

Technical details of PCI procedures are reported in Table 2. PCI success was achieved in 124 procedures leading to a PCI success rate of 74.3% and patient success rate of 78.5%. Drug eluting stents were implanted in 95.1% of successful procedures (Table 2). One (0.6%) patient only had an angiographic complication (minor guidewire-induced coronary perforation sealed by anticoagulation reversal and prolonged balloon inflation). No catheter-induced iatrogenic dissection of coronary ostia occurred. A minor access-site vascular complication occurred in 1 (0.6%) patient who had a forearm hematoma which was successfully managed by prolonged compressive bandage without any need of blood transfusion nor surgery.

Table 2. Angiographic and procedural characteristics of the study population and of procedures conducted in Period 1 and Period 2. 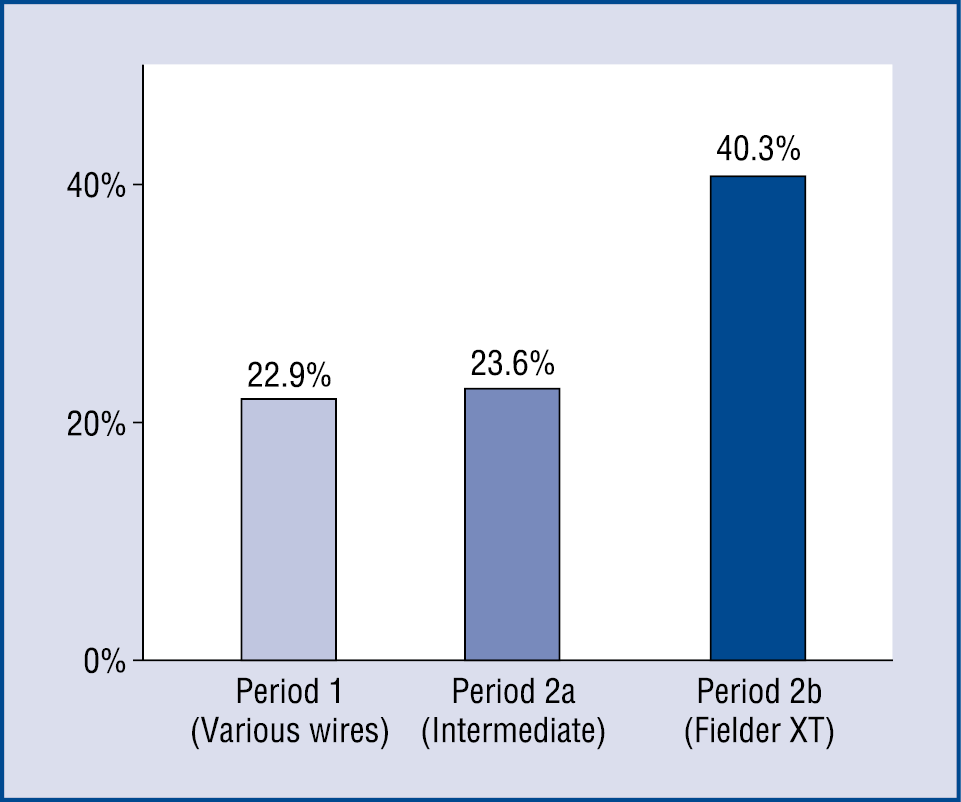 Figure 4. Rate of successful lesion crossing with the first wire during the three “wiring strategy” phases of the study.

CTOs represent the most technically challenging lesions for PCI and, according to the standard practice of the majority of CTO-dedicated centers and operators, PCI on CTO are attempted using large guiding catheters and trans-femoral approach. In the present manuscript we show that:

TRA is a valuable alternative to TFA associated with a reduction of vascular complications [6, 7] and possibly to a better clinical outcome especially in acute coronary syndromes [8]. Thus, the use of TRA for routine PCI is rapidly expanding while its application to complex procedures is under evaluation.

In the specific field of CTO PCI, usually, the need for high back up force to advance devices into the coronary tree and the possible need for complex techniques requiring simultaneously multiple devices has traditionally lead to the use of large guiding catheters through the femoral access as a default strategy in the majority of cath labs [9]. Yet, progressive miniaturization of materials and evolution of wiring techniques may currently allow to tackle the majority of CTO by 6 F guiding catheters [4]. Moreover, in the hand of expert TRA operators, bilateral radial access and appropriate guiding catheter selection and manipulation allows to have an excellent back-up from the guiding catheter [4].

In the present study we report on the experience earned in the last years by dedicated trans-radial operators operating in a high volume TRA centre [2]. The utilization of TRA CTO PCI in this specific environment has been encouraged by the observation that access crossover and coronary or peripheral complications were rare [2]. Our data suggest that in a dedicated TRA centre TRA can be considered also for highly complex PCI like CTO. The possible relevance of TRA experience in TRA CTO PCI is also suggested by the highly variable rate of access failure reported by previously published studies [5, 10–13]. Moreover, since access crossovers are mainly due to anatomical variants of radial and subclavian arteries [11], the ability to promptly recognize and appropriately overcome upper limb anatomic variants [14] is probably pivotal to successfully complete the procedure by TRA.

Moving from procedure safety to procedure efficacy, procedure success rates should be carefully considered. In CTO PCI studies, the issue of matching between lesion complexity and operator experience with CTO are probably the main determinants of PCI success. Such concepts are strongly supported by our study which shows increasing success rates despite worse angiographic features. Similar results were observed in the specific setting of TRA CTO PCI by other authors [5, 10].

Trying to provide better characterization on the main evolution of our CTO technique during the study, we were able to distinguish 3 phases on the bases of guidewire selection. In the first phase, we tried to select at procedure beginning the best guidewire on the basis of lesion anatomy. Such approach may lower the number of procedures initiated by each guidewire (thus limiting the operator’s learning of best manipulation of each specific guidewire) and may increase the risks of unnecessary subintimal track in the case of incorrect stiffer wire selection for relatively soft lesions with adverse angiographic aspect (since no angiographic feature may accurately predict lesion stiffness). Thereafter, we moved to a strategy of stepwise increase in guidewire stiffness, observing an impressive increase in success rates. Finally, after the availability in Europe of the Fielder XT (Asahi Intecc, Aichi, Japan), a unique guidewire characterized by hydrophilic coating and soft tapered tip, we started to use such guidewire as the very first step in order to try navigate the (often angiographically-invisible) micro-channels within the tissue of the CTO lesion (“sliding” technique). The high rates of success and low adverse events observed suggest that the approach of antegrade attempt of CTO crossing with sliding technique followed by eventual stiffer wire selections via radial approach is a safe and highly effective strategy. Further improvement in such direction is expected by the introduction of miniaturized (i.e. 0.010”) guidewires (and balloons) [15]. The first series of such devices is represented by the “Slender System” (Japan Lifeline) and 2 studies reported their use in the setting of CTO [16, 17].

This is a single center study reporting the results obtained by 2 highly experienced radial operators who selected the cases. Accordingly, the complexity of attempted CTO cannot be compared with other case series and the reported results may not be extended to operators with different radial experience.

Retrograde recanalization attempt was reserved for second attempts (with favorable anatomy) only so that the present paper does not allow any evaluation regarding the feasibility of TRA for retrograde approach for CTO PCI. Yet, some case reports [18, 19] and case series [20, 21] suggest that retrograde CTO techniques may be practiced by radial approach in patients with various anatomical complexity.

Finally, post-procedure renal function parameters were not systematically investigated so that the incidence of procedure-related contrast-induced nephropathy was not assessed.

This paper is dedicated to the memory of Dr Hideo Tamai. His incredible technical skill and extraordinary dedication to patients cannot be forgotten by anybody who had the opportunity to see him working in his hospital.