The Atrial Fibrillation in Turkey: Epidemiologic Registry (AFTER)

While atrial fibrillation (AF) is the most common rhythm disorders observed in our clinical practice, its prevalence in general population is 1–2% [1]. As an important cause of cardiovascular mortality and morbidity with progressively increasing prevalence, AF has become a serious health issue recently. In accordance with the increasing and ageing world population, the prevalence of AF and AF related adverse events, especially thromboembolic events, increases. Therefore, current guidelines recommend anticoagulant treatment in patients with moderate to high risk of thromboembolic events [1]. These patients have high scores; a score evaluation system using a 9 point scale (9-point score evaluation) defined as CHA2DS2-VASc (cardiac failure, hypertension, age ≥ 75 (doubled), diabetes, stroke (doubled), vascular disease, age 65–74 and sex category [female]) acronym [2]. In our country, the studies conducted on AF, stroke and oral anticoagulant usage are mostly unicenter studies with a limited number of patients and CHA2DS2-VASc score wasn’t included [3–5]. Since the multicenter studies have been conducted in western and far eastern populations, they do not reflect the characteristics of the country [6–10].

The aim of this study is to determine the stroke risk of the patients with non-valvular AF, using CHA2DS2-VASc score based on the records of the multicenter, prospective Atrial Fibrillation in Turkey: Epidemiologic Registry (AFTER) study and to evaluate the profile of anticoagulant medication use in these patients and the accordance with the guidelines.

2242 consecutive patients admitted to the cardiology outpatient clinics of 17 different tertiary health care centers with at least one AF attack determined on electrocardiographic examination. They were included in the study in a manner of reflecting the population of all geographic regions of Turkey [11]. These centers were interviewed and informed about the number of patients that they should admit to the study according to the population of the city. The inclusion criteria were determined as “all consecutive patients over 18 years of age who applied to the cardiology outpatient clinics with at least one attack of AF identified on electrocardiographic examination”. Emergency admittances, inpatients, patients who had refused to be included in the study or had not signed the consent form were excluded from the study. Basic demographic data and medical treatments of the patients were assessed. While the patients were being assessed by a cardiologist, the data obtained were being recorded to the patient registry form prepared for the study. Stroke risk was evaluated by CHA2DS2-VASc score [2]. CHA2DS2-VASc depends on a point scoring system that gives 2 points stroke and/or transient ischemic attack and 1 point for each of the following factors: age between 65 and 74 years, history of hypertension, diabetes, recent cardiac failure, vascular disease (myocardial infarction, complex atheromatous plaque, prior revascularization, amputation due to peripheral artery disease or peripheral artery disease including angiographic results of peripheral artery disease) and female gender [2]. In terms of stroke risk, the patients were divided into two groups as high risk patients and low risk patients. The patients underwent routine electrocardiographic screening for the assessment of heart failure. Hypertension was described as blood pressure measurement > 140/90 mm Hg, prior diagnosis of hypertension or being on antihypertensive treatment. Diabetes mellitus was described as a fasting blood glucose level of > 126 mg, prior diagnosis of diabetes mellitus or being on antidiabetic treatment. A standard registration form was filled for every patient and a consent form was signed by the patients. Ethics Committee consent of the study coordinating center was obtained.

Table 1. Demographic characteristics of the patients. 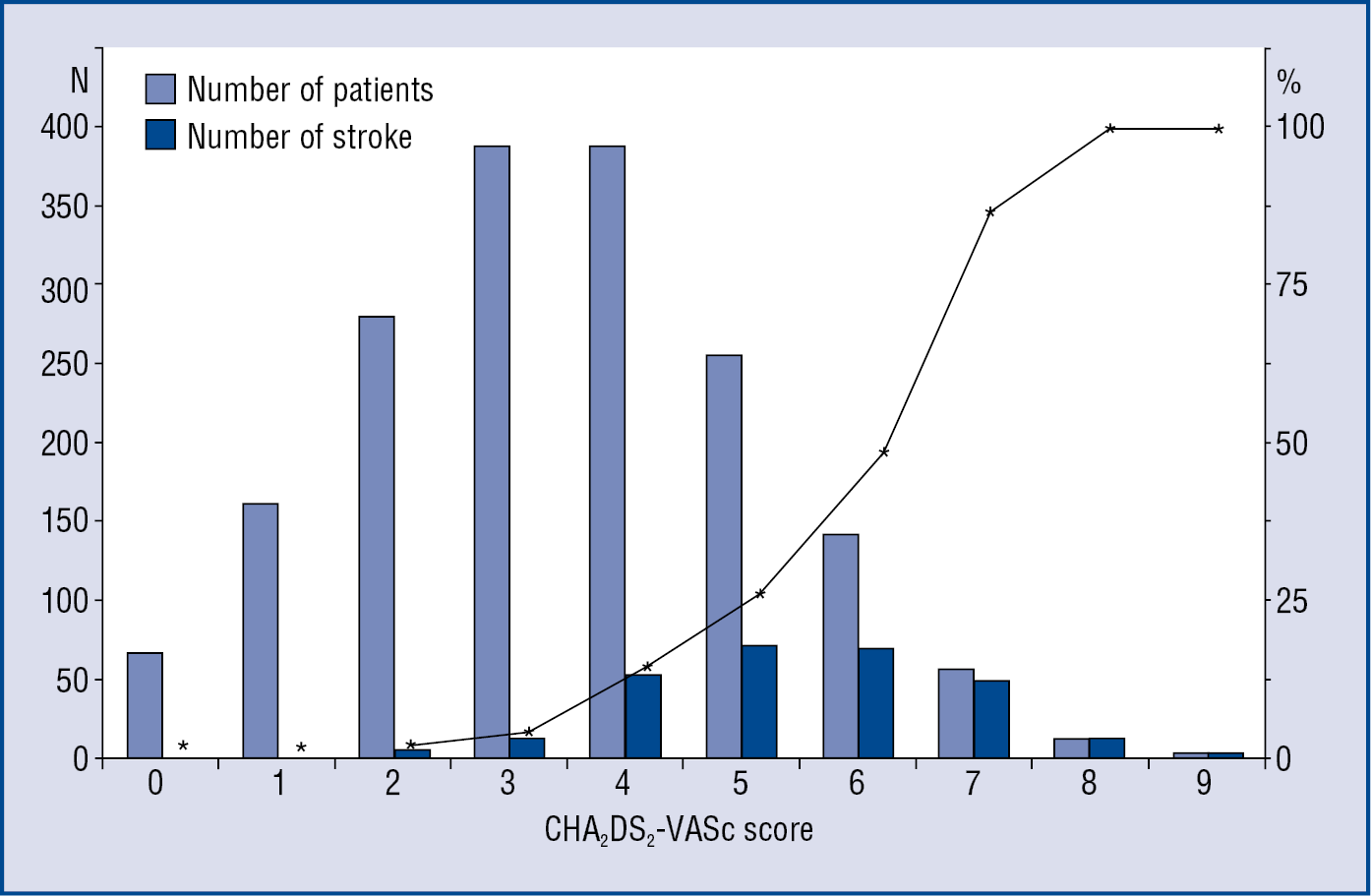 Figure 1. The relationship between CHA2DS2-VASc scores and number of patients with stroke; *percentage of stroke. 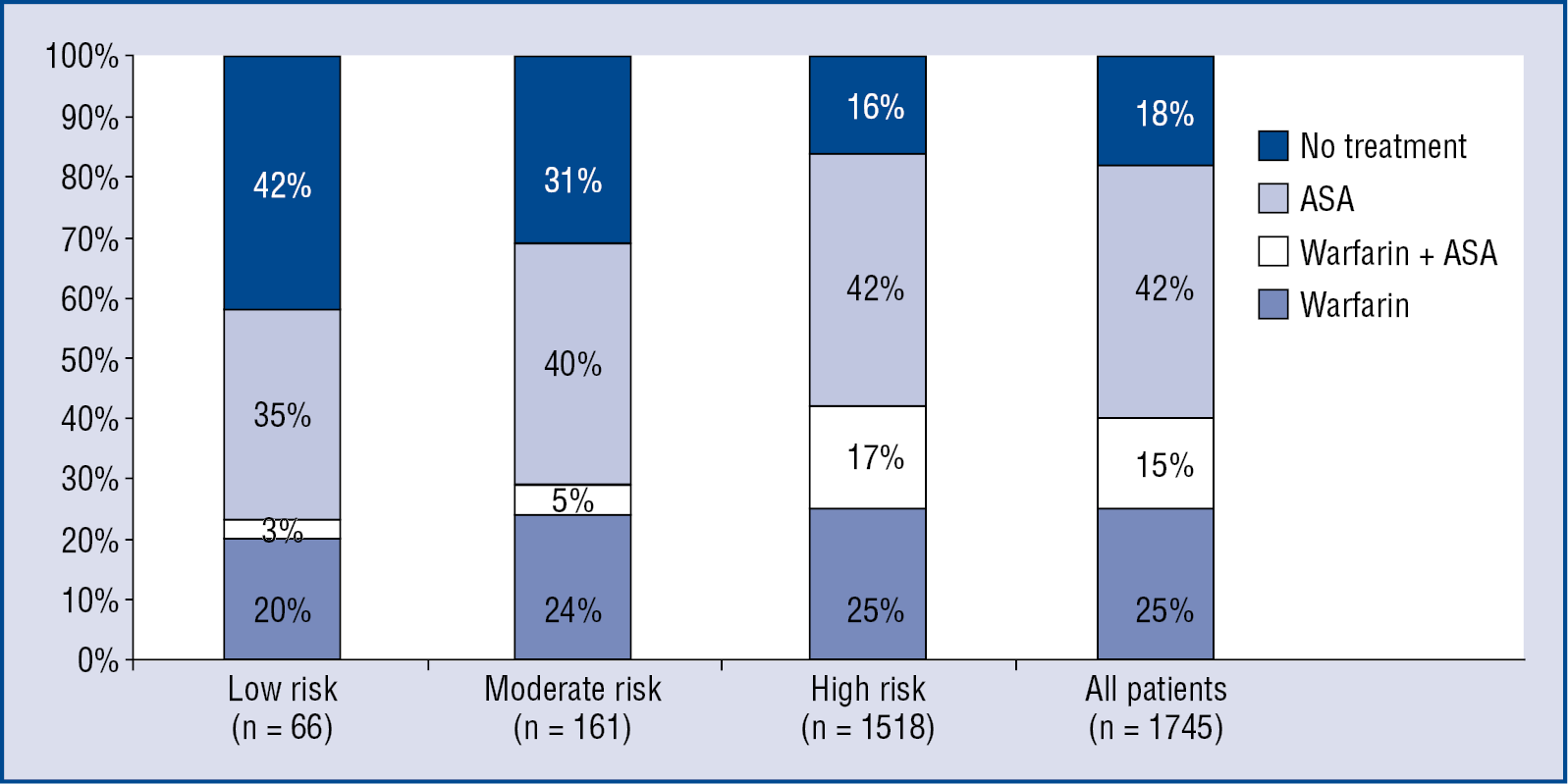 Figure 2. The use of oral anticoagulant/antiplatelet medications according to the stroke risk groups; ASA — acetylsalicylic acid.

The present study is a multicenter, prospectively designed study of non-valvular AF. According to the analysis of the preliminary data, 4/5 of AF cases were included in the persistent/permanent group. The frequency in females was higher than in males. The most common concomitant risk factor was hypertension. According to CHA2DS2-VASc score, while 87% of the patients were high risk patients, only 42% of these patients were on oral anticoagulant treatment. The major reason for not receiving oral anticoagulant in spite of medical indication was determined as physician’s neglect.

One of the results of the AFTER study that differ from that of the literature was the determination of an incidence in females surpassing the incidence in males with a percentage of 22%. However, the incidence of AF was 1.5 to 2 times higher in females than in males according to the records of Framingham studying American Society and Euro Heart Survey studying European societies [12, 13]. Although our results appear to contradict these data, they support the data of TEKHARF study (Cardiac Diseases and Risk Factors in Adults in Turkey), the epidemiological study on AF in Turkey [14]. When assessed according the geographical regions of Turkey, no difference was detected between female/male distribution. This observation suggests that the aforementioned result is a demographic characteristic specific to our society. In a study of 1084 patients with non-valvular AF conducted by Lip et al. [2] — the one who introduced the CHA2DS2-VASc risk score to the literature — the most common comorbidity in AF was demonstrated as hypertension. In our study, while hypertension was observed in a similar rate, vascular disease was observed in a lower frequency and heart failure, history of stroke and diabetes mellitus were observed at a higher frequency.

Euro Heart Survey Investigators showed that, when assessing the independent effect of all potential risk factors on thromboembolic events, female gender was the only significant associated factor (OR = 2.53; 95% CI 1.08–5.92; p < 0.29). However, in our cohort, the multivariate analysis revealed age as the only significant factor.

In the Euro Heart Survey study [15] of 2706 patients with AF, when the patients were assessed in terms of oral anticoagulant/antiplatelet medication profile, 57% of all patients were on warfarin treatment alone, 7% were on warfarin + ASA treatment, 27% were on ASA treatment alone, and 9% of the patients were not using any of these treatment options. In our study, while the rate of oral anticoagulant use was 40%, ASA use was approximately 2 times higher. In the J-RYHTHM [6] study which was conducted in Japan, while the rate of anticoagulant use was 87%, the rate of ASA use was found to be 22%. In the subgroup analysis [16] of the same study, 89% of the 6324 patients with non-valvular AF were on warfarin treatment and 23% were on ASA treatment. In this study too, only in 34% of the patients the effective INR level (2.0–3.0) was achieved. When the data of our study were compared with these results, while the rates of warfarin use were dramatically lower, the effective INR levels were achieved at a rate surprisingly similar to the rate of the aforementioned study. When considering that the most common cause of not receiving anticoagulant medication was that in 70% of cases the medication was not prescribed by the physician, one may suppose that our physicians attach a particular importance to warfarin monitoring and surpassing the value reported in the literature. However, the detection of the rate of unnecessary use of warfarin as 23% in the low risk group reveals that the guidelines are not followed in the anticoagulation management. In this way it emphasizes the important barrier concerning warfarin. Therefore, novel anticoagulants will be welcomed in real world practice against stroke prevention in patients with AF [17–20].

According to the results of our study, the stroke prevalence in patients with non-valvular AF was 15% and all of these patients were included in high risk group according to the CHA2DS2-VASc score. Age was the most powerful independent determinant of stroke. The major cause of the anticoagulation rate of 40% and the prevalence of 37% in achieving the effective INR levels and not receiving anticoagulant medication was the physician’s neglect. These results suggest that in our clinical practice of non-valvular AF, particularly in the treatment field, one shall pay more attention to the stroke risk scores indicated by guidelines and anticoagulation shall be managed according to these guidelines.