Aortic valve sclerosis (AVS) is defined by echocardiography as thickening and calcification of the normal trileaflet aortic valve without obstruction to the left ventricular outflow. The prevalence of AVS has been estimated at the level of 25–30% in patients ≥ 65 years and up to 40% in those ≥ 75 years [1, 2]. Several reports have demonstrated a significant association between AVS and atherosclerosis risk factors or clinical atherosclerosis [3–5].

Eighty subjects with AVS and age-gender and traditional CV risk factors, and 80 subjects without AVS were prospectively selected from the subjects directed to the echocardiography laboratory at the Ahi Evren Thoracic And Cardiovascular Surgery Training And Research Hospital. Patients with aortic stenosis (transaortic flow velocity > 2.5 m/s), rheumatic valvular disease prosthetic valves, bicuspid aortic valves, congenital heart disease, bacterial endocarditis, atrial fibrillation, or hypertrophic obstructive cardiomyopathy, as well as those who had suffered from symptomatic vascular disease such as stroke, transient ischemia, coronary heart disease, congestive heart failure symptoms or ejection fraction less than 50%, and intermittent claudication or any peripheral artery revascularization, were excluded from the study. Coronary heart disease was defined by: (1) self reported myocardial infarction, angina, or use of nitroglycerin; and (2) self-reported history of coronary angioplasty or coronary artery bypass surgery. Cerebrovascular disease was defined by self-reported stroke, transient ischemic attack, or carotid endarterectomy. AVS is defined by echocardiography as thickening and calcification of the normal trileaflet aortic valve without obstruction to the left ventricular outflow. CAVI measurement and echocardiograhic examination were performed by 2 different investigators who were blinded to the patients clinical data (AOV and HB, respectively). Informed consent was obtained from all subjects.

In addition to questions about the symptoms of ischemic heart disease, peripheral vascular disease, and stroke, data on the CV risk factors, diabetes mellitus, arterial hypertension, and smoking habits were obtained. Patients were considered to be hypertensive if they had a systolic blood pressure > 140 mm Hg and/or diastolic pressure > 90 mm Hg or were using antihypertensive drugs. Subjects with fasting glucose ≥ 126 mg/dL and/or use of pharmacological treatment were considered diabetics. Smoking was defined as “current smokers” or “nonsmokers”. Hypercholesterolemia was defined as total cholesterol > 200 mg/dL or taking medications.

Arterial stiffness was assessed by CAVI. It was measured using a VaSera VS-1000 CAVI instrument (Fukuda Denshi Co. Ltd., Tokyo) by the methods described previously [10]. CAVI was measured in the morning after 12 h of fasting within 1 day after echocardiography. Briefly, cuffs were applied to the bilateral upper arms and ankles, with the subject supine and the head held in the midline position. After resting for 10 min, measurements were performed. Electrography, phonocardiography, and pressures and waveforms of brachial and ankle arteries were measured. Next, CAVI were automatically calculated. According to the manufacturer company recommendations, CAVI was considered normal (CAVI < 8), borderline (8 ≤ CAVI < 9) and abnormal (CAVI ≥ 9) [11].

Clinical, demographic and laboratory characteristics of patients and control subjects were illustrated in Table 1. There was statistically significant difference of CAVI values among AVS and control subjects (Fig. 1). In univariate analysis, there was significant association between AVS and CAVI (95% confidence interval [CI] 1.44–2.48, p < 0.001). Multivariate analysis demonstrated CAVI (95% CI 1.39–2.44, p < 0.001) as an independent determinant of AVS (Table 2). 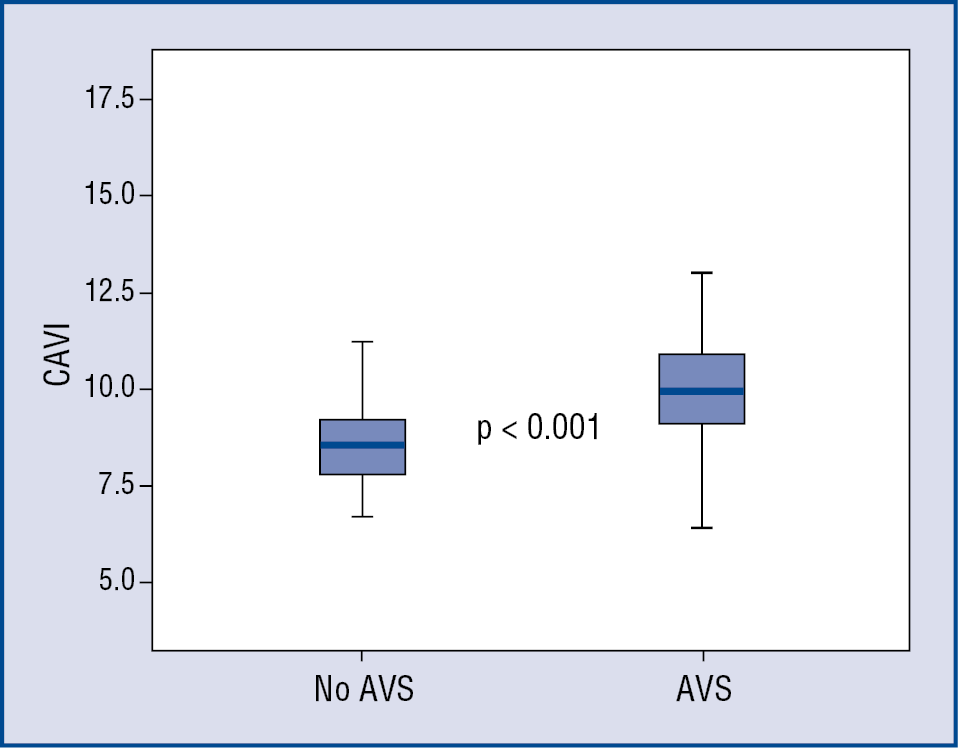 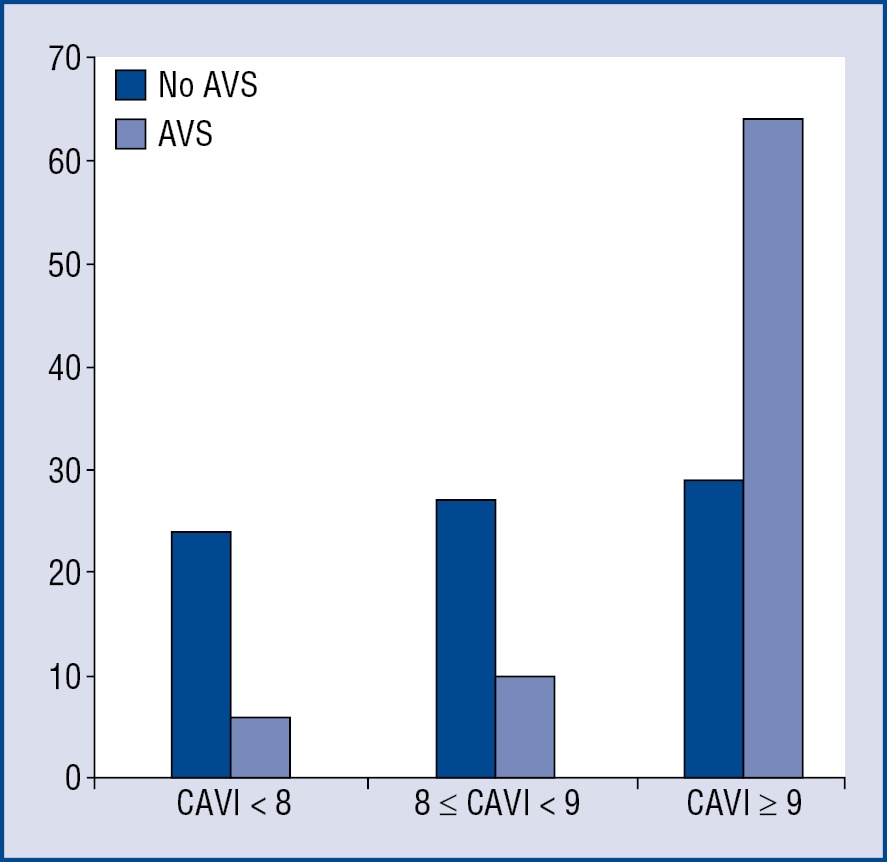 In present study, we have found increased CAVI values representing arterial stiffness in asymptomatic subjects who had AVS. Also, there was a significant and independent association between presence of AVS and CAVI.

Arterial stiffness has been known as a sign of CV risk for a long time, and assessment of arterial stiffness improved the prediction of CV disease when added to traditionally recognized CV risk factors [12]. Several mechanisms may explain the association between arterial stiffness and coronary heart disease. Arterial stiffness has a negative hemodynamic effect on heart by causing increase of systolic and decrease of diastolic blood pressure. These changes lead to the increase in myocardial oxygen demand, reduce in ejection fraction, increase in ventricular load and inducing left ventricular hypertrophy [13]. Decrease of diastolic blood pressure can compromise coronary perfusion, resulting in subendocardial ischemia [14]. Furthermore, stiffer arteries may contribute to rupture and ulceration of atherosclerotic plaques [15], especially when inhomogeneity in stiffness in and around the plaque is present [16]. In addition, increased pulse pressure that is a consequence of arterial stiffness is independently associated with arterial plaque ulceration and rupture [17].

The presence of AVS has been suggested as a marker of increased CV risk, including increased mortality. Also, after adjusting for baseline characteristics, AVS was associated with increased risk of CV death, including higher rates of myocardial infarction and congestive heart failure among patients without prior history of coronary artery disease [18]. Moreover, in a recently published study, AVS predicts all — cause and CV mortality [19]. Therefore, AVS may be considered a potentially useful prognostic factor in patients without overt evidence of coronary artery disease [20, 21].

Relation between AVS and arterial stiffness may be explained by the fact that AVS represents a surrogate marker either for underlying atherosclerotic disease [3, 22] or some generalized systemic process, such as inflammation [23, 24]. Furthermore, similarities of valve composition in aortic valve sclerosis to atherosclerotic disease give credence to the biologic plausibility of the association of aortic valve sclerosis with both traditional clinical risk factors and CV events. Arterial stiffness provides information about the functional and structural vascular changes and surrogate marker of atherosclerosis. It has been related to the Framingham and other CV risk scores.

In the previous study, we did not find a meaningful relation between AVS and arterial stiffness, assessed by carotid-femoral PWV [9]. In present study, we evaluated arterial stiffness by CAVI on which blood pressure has less impact. In addition, Cecelja et al. [25] performed a systematic review of cross-sectional published literature in order to determine independent predictors of arterial stiffness assessed by carotid — femoral PWV. They found consistent independent association between PWV and age and blood pressure. But no independent association between PWV and sex, total cholesterol, low-density lipoprotein cholesterol, high-density lipoprotein cholesterol, triglycerides, smoking, or body mass index were noted. Therefore, they reached to the conclusion that the contribution of risk factors other than age and blood pressure to PWV is small or insignificant. Thus, the discrepancy in results of 2 studies may be due to methodological issues inherent in the evaluation of arterial stiffness by different techniques.

There are limitations to our study. First of all, number of study population is relatively small. Based on its cross sectional study, the present findings are inherently limited to explain causal relationship between AVS and CAVI. Also, we have excluded subjects with ankle brachial index < 0.9 since CAVI in these subjects may be inaccurate.

In conclusion, we have demonstrated AVS as a marker of increased arterial stiffness in subjects who were asypmtomatic and clinically free of CV disease. Echocardiographic examination of aortic valve may have a role in screening asymptomatic subjects with increased risk of CV disease in general population.