Atrial fibrillation (AF) remains the most common clinically encountered arrhythmia associated with increased morbidity and mortality [1]. Diabetes mellitus (DM) has been reported as one of the strongest independent risk factors for AF and atrial flutter with an odds ratio of 1.4–2.2 [2–4] and its prevalence in AF patients is 10–25% [5]. On the other hand, DM is one of the most common chronic diseases with increasing prevalence of approximately 140 million people worldwide. This number is projected to increase to 300 million by the year of 2025 [6]. However, the pathophysiological pathways linking DM and AF remain obscure.

Sixteen Japanese rabbits (1.5–2.0 kg at the beginning of the study) (Beijing Medical Animals Research Institute, Beijing, China) were used in this study and divided into two groups: DM group (n = 8) and control group (n = 8). In the DM group, alloxan monohydrate (Sigma Aldrich Chemical, Saint Louis, MO, USA) was dissolved in sterile normal saline to achieve a concentration of 5% (W/V), and 120 mg/kg was immediately administered intravenously via the marginal ear vein over a period of 2 min with a 25 gauge butterfly catheter. The diabetic state was examined 48 h later by quantitative determination of blood glucose levels of ≥ 14 mmol/L. Then, blood glucose concentration was monitored weekly with a glucometer Optium Xceed (Abbott Laboratories Medisense Products, Bedford, MA, USA). The animals in both groups were housed in cages in the Tianjin Institute of Cardiology under a 12 h light cycle, constant temperature and humidity, while they had free access to water and a standard laboratory pellet diet for 8 weeks.

After 8 weeks, echocardiographic images were obtained after inducing general anesthesia with 3% pelltobarbitalum natricum (10 mg/kg). Rabbits were placed on the table at the left lateral decubitus position. The echocardiograms were obtained using a GE Vingmed machine (Vivid 7/Vingmed General Electric, Milwaukee, WI) equipped with a 7.5 MHz standard pediatric probe. Parasternal and apical views were obtained with the probe positioned at a cranial angle over a shaved area on the lower portion of the thoracic wall as previously reported [9, 10]. The exact position of the transducer was adjusted as necessary to acquire standard images. Standard parasternal short- and long-axis views as well as apical 2-, 3- and 4-chamber views acquired with at least 200 frames per second were digitized during 5 consecutive cardiac cycles in cine-loop format for analysis. Echocardiographic measurements by both 2D and M-mode were obtained in the parasternal long axis view. These included interventricular septal thickness (IVST) and left ventricular posterior wall thickness (LVPWT), left ventricular end-diastolic dimension and end-systolic dimension, aortic root and left atrial anteroposterior diameter. Doppler imaging of the mitral valve was obtained from the apical 4-chamber view. The following measurements were obtained at the mitral inflow velocity image: peak E and peak A wave velocities, E/A ratio. Measurements of left ventricular ejection fraction (LVEF) according to international standards [11]. The average of the 3 measurements was used for subsequent analysis. 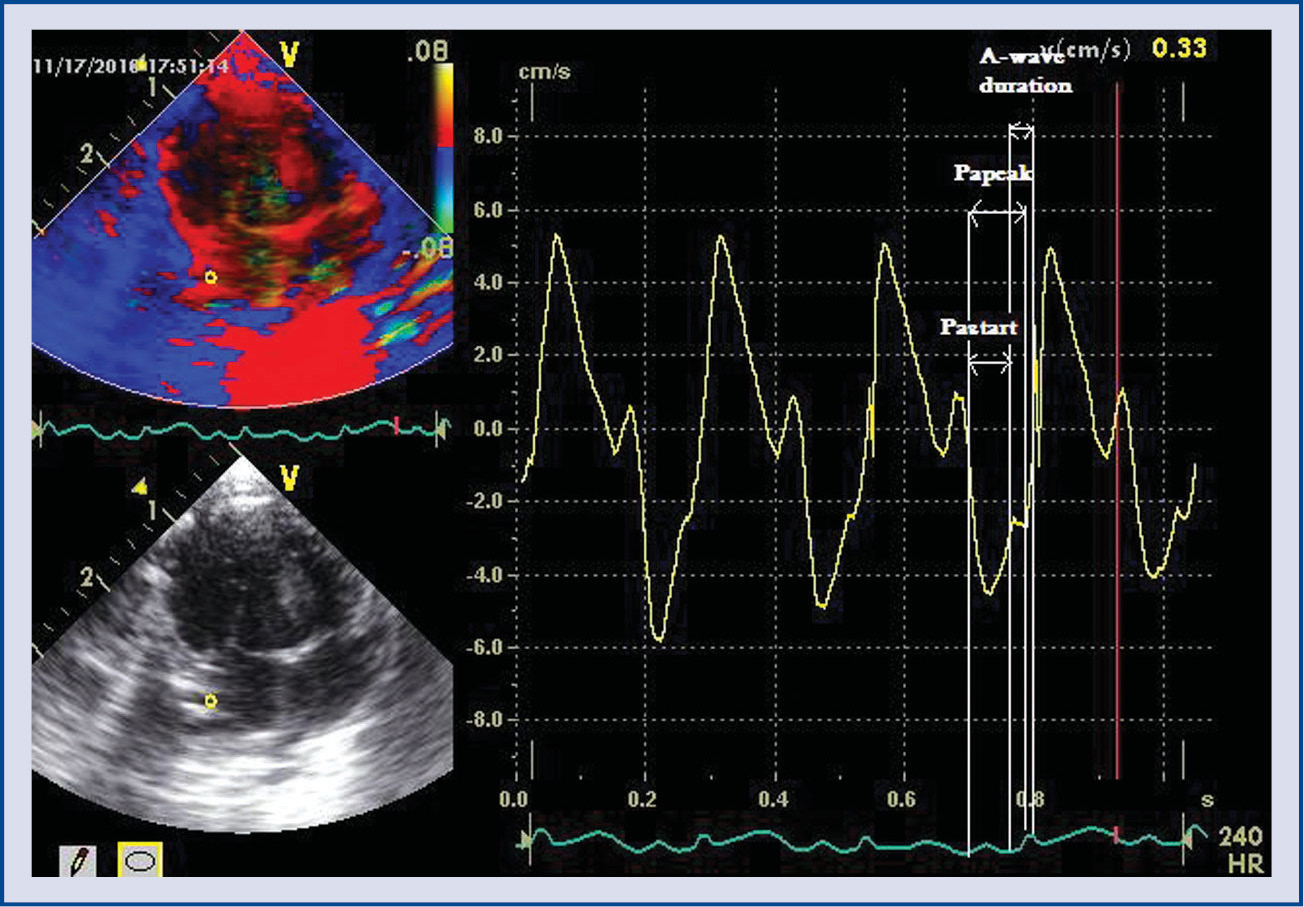 At 8 weeks, the rabbits were intravenously heparinized (1000 IU) and anesthetized with 3% pelltobarbitalum natricum (30 mg/kg). The ECG tracing was obtained with bipolar cutaneous electrodes placed on all 4 limbs and the signal was amplified and filtered. The right carotid artery was isolated surgically with a median incision in the neck. Cannulae was inserted into the right carotid artery to monitor aortic systolic and diastolic blood pressure (SBP, DBP). SBP and DBP (3 times, 20 s interval) were recorded after a stabilization period of 5–10 min. Then the cannulae was moved slowly through the aortic valve to left ventricle to measure left ventricle end-diastolic pressure (LVEDP). The ECG and BP were continuously monitored on custom-made computer software program (Electrophysiological Recording System, TOP-2001, HTONG Company, Shanghai, China).

Following the hemodynamic studies, the rabbit hearts were quickly removed and placed in cold perfusion fluid (4oC). The aorta was cannulated and connected to a Langendorff perfusion system filled with warmed (37 ± 0.5oC) Tyrode’ s solution. The perfusion pressure was maintained at 65–75 mm Hg, resulting in an initial coronary flow of 50 to 60 mL/min. The Tyrode’s solution consisted of the following (mmol/L): NaCl 130, KCl 5.6, NaHCO3 24.2, CaCl2 2.2, MgCl2 0.6, NaH2PO4 1.2, and glucose 12. The solution reservoir was saturated with 95% O2 and 5% CO2 and had a pH of 7.4.

Four sets of silver bipolar electrodes were placed on the epicardial surface of high right atrium (HRA), high left atrium (HLA), left atrial appendage and right ventricular apex. The atrial effective refractory period (AERP) was evaluated using programmed extra-stimuli and defined as the longest S1–S2 interval that failed to capture. The S2 extra-stimulus was delivered after a drive-train of 8 S1 stimuli of 250 ms. The S1–S2 interval was decreasing in intervals of 2 ms until atrial refractoriness was reached (pulse duration: 2 ms, output: 2-fold diastolic pacing threshold). AERP dispersion (AERPD) was defined as the difference between the longest AERP and the shortest AERP at 4 different sites. Wenckebach cycle length of atrial-ventricular conduction was measured by RA incremental pacing. The interatrial conduction time (IACT) was measured during HRA (at a pacing cycle length of 250 ms) pacing. IACT was defined as the duration from the HRA pacing stimulus to the beginning of HLA stimulus. AF vulnerability was tested by the burst pacing (cycle length of 50 ms) for 1 s, 5 times at 30 s interval at an amplitude of 5 V. We evaluated the appearance of AF, defined as rapid, irregular atrial response longer than 1000 ms. All epicardial ECG were amplified with a custom-made amplifier and recorded with a custom-made computer software program (Electrophysiological Recording System, TOP-2001, HTONG Company, Shanghai, China).

Isolated atrial samples from the LA free wall was placed in 4% paraformaldehyde, embedded in paraffin, and cut into 4 µm cross-sections. Sirius-Red (Sigma Aldrich) staining was used to evaluate interstitial fibrosis. We randomly selected 40 sections from 8 rabbits per group and evaluated them at 200-fold magnification.The vascular and perivascular fibrosis were excluded from the selected sections. The red pixel content of digitized images was detected as interstitial fibrotic area and measured relative to total tissue area with a digital imaging analyzer of Image Pro Plus 4.5 Scion image software (Scion corporation, Frederick, MD), these analyses were performed in a blind manner. The result was obtained from 2 independent measurements.

Data are presented as mean ± standard deviation (SD). Statistical analysis was done using the Student’s t-test (unpaired). The incidence of AF was analyzed by Fisher’s exact test. Statistical differences were considered significant at a p value < 0.05. For the exploration of relationships between TDI parameters, electrophysiological parameters and atrial interstitial fibrosis, we calculated Pearson’s correlation coefficients.

Atrial electromechanical function. The atrial electromechanical function parameters measured from different sites by TDI are shown in Table 2. RA Pastart, LA lateral wall Pastart, LA lateral wall Papeak and LA posterior wall TEMA were greater in the DM group compared with controls (p < 0.05). Pastarts and Papeaks in other atrial walls tended to increase in DM group, but they did not reach statistical significance.

As shown in Table 3, the DBP and LVEDP were slightly increased in DM group. However, no significant differences were observed between the 2 groups.

As shown in Table 3, in both the RA and the LA, the AERPs in DM group were slightly prolonged. However, no significant differences were observed between the 2 groups. AERPD was significantly increased in DM group (p < 0.001). IACT in diabetic rabbits was significantly prolonged compared with healthy controls. Figure 2A shows representative AF induced by the burst pacing, which were observed in the DM group; Figure 2B shows the inducibility of AF in both groups. AF was induced in 6/8 (75%) of animals in DM group, whereas 1/8 (12.5%) in controls (p < 0.05).

Figure 3A and B illustrates the representative LA histology in both groups and the quantitative ratio of the area of fibrosis to the area of the reference tissue is summarized in Figure 3C. Compared with the control group, extensive and heterogeneous interstitial fibrosis was observed in the DM group (2.09 ± 0.7% vs. 6.67 ± 2.3%, p < 0.01). 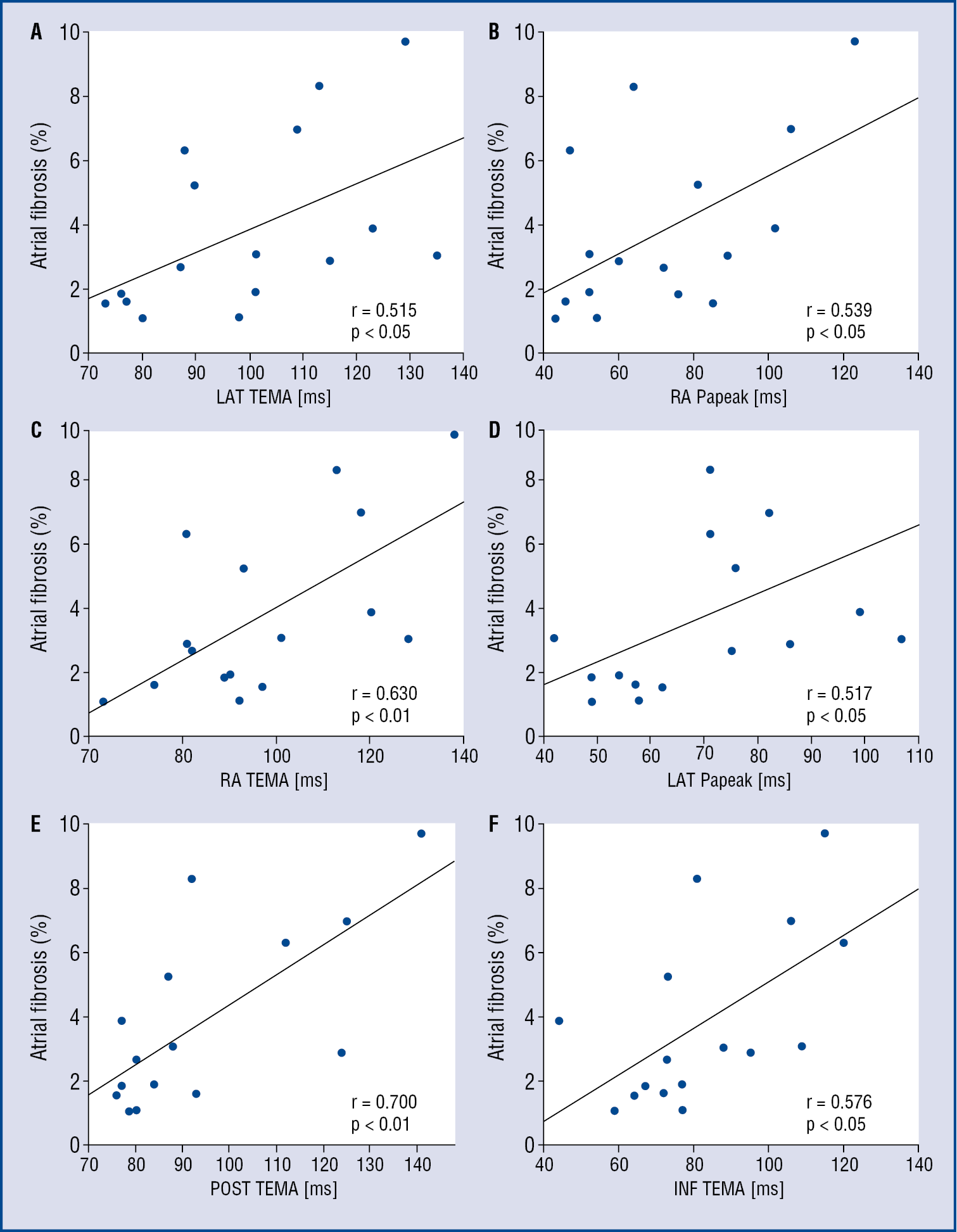 A recent study indicated LA mechanical function measured by LA total emptying fraction is a predictor for the development of post-operative AF following cardiac surgery [16]. Additionally, the atrial emptying pattern is strongly affected by LV diastolic properties [17, 18]. It has been demonstrated that in diabetic patients, decreased LA passive emptying volume is related to increased LVEDP and increased LA active emptying volume is associated with compensatory mechanisms in LA contraction [15]. However, in present study, diastolic and systolic dysfunction of LV and systolic dysfunction of LA were not observed. Moreover, hemodynamic parameters, such as the DBP and LVEDP were slightly increased in DM group. Therefore, we speculate that diabetic atrial mechanical dysfunction at 8 week was too slight to be detected by echocardiography.

Atrial remodeling involves changes in the structure, function and geometry of the atria, modification of atrial electrical and contractile properties, and changes in the amount and the composition of the extracellular matrix [19, 20]. Together, these alterations create an arrhythmogenic substrate essential for the onset and persistence of AF. Structural remodeling results in electrical tissue non-homogeneity, slowed conduction and electrical uncoupling, facilitating AF continuation without inducing changes in atrial action potential properties.

The potential mechanisms for diabetes-induced atrial remodeling were not fully understood. It was supposed that inflammation, oxidative stress activation, autonomic imbalance were observed in diabetic pathophysiological state, which may promote the development of AF. Also angiotensin 1 receptor activity was upregulated in diabetic hearts [21], and this receptor was coupled with transforming growth factor-beta1 and lead to atrial fibrosis [22]. Kato et al. [23] showed that inter-atrial conduction delay and increased fibrotic deposition in atrium play a major role in producing atrial arrhythmogenicity in genetic type 2 DM rats, which indicated that atrial structural remodeling characterized by extensive interstitial fibrosis may be one of the major mechanisms of AF development in diabetic heart. Another study [24] from this group demonstrated that activation of advanced glycation end products and its receptor was associated with diffuse atrial interstitial fibrosis in streptozotocin-induced diabetic rats. The present study showed that impaired LA electromechanical function along with extensive atrial fibrosis and increased inter-atrial conduction delay were related to increased inducibility of AF. Also, our results also indicated that AERP dispersion was increased in DM rabbits, suggesting that heterogeneity of repolarization is an electrophysiological change in this setting. However, the molecular mechanisms for DM-induced atrial electromechanical dysfunction and atrial remodeling should be investigated in future studies. Further studies on atrial electromechanical function may be of special value to assess the impact of novel thearpeutic interventions anti-remodeling effects such as glitazones [25] on prevention and treatment of AF.

There are several limitations in the present study. First, tissue Doppler measurements depend on skills of the person performing the examinations and need suitable acoustic window to carry out registrations of acceptable quality. We have to take into account the intrinsic limitations of the technique, such as dependency on the angle of incidence, the variable position of the sample volume during the cardiac cycle, and the complex movement of the analyzed segment. Heart rate and small heart of the rabbit may affect the imaging quality of our study. Second, we do not have data on the successive electrophysiological and structural changes over time as well as on the temporal relationship between the two types of remodeling. Another limitation is that we did not assess the possible paradoxical response of AERP to increased heart rates which is another characteristic of electrical remodeling. Finally, the molecular mechanisms for DM-induced electrical and structural remodeling should be further investigated in future studies.

This work was supported by grant (No. 30900618 to T.L.) from the Program of Natural Science Foundation of China. The authors thank Dr. Panagiotis Korantzopoulos (Department of Cardiology, University of Ioannina School of Medicine, Ioannina, Greece) for helpful comments and suggestions.

Conflicts of interest: none declared