Neuroendocrine neoplasms (NENs) show wide spectrum of clinical course – from benign biological potential to recurrences and rapidly progressive disease. Somatostatin analogs that bind to somatostatin receptor are part of the therapy; detection and evaluation of activation of somatostatin receptor subtypes are part of the process of new therapy induction. When using RT-PCR method and immunohistochemistry, it is possible to detect more than two SSTR subtypes in majority or all neuroendocrine neoplasms regardless tumor origin. Generally with some exceptions, from the viewpoint of tumor grade – apart the site of origin, there is a tendency to decrease the percentage of SSTRs expression; 100% (G1,2)-85.7% (G3) for SSTR 1 ; 81.8% (G1, 2)-61.9% (G3) for SSTR 2; 54.5% (G1, 2)-52.4% (G3) for SSTR 3; 9% (G1, 2)-4.8% (G3) for SSTR 5. Different studies indicate significant differences in the expression of SSTR 1 and 2A and 2B between NEC G3 small cell type and non-small cell type. Further research on SSTRs expression in NEN could serve as base to development and improvement of somatostatin analogs’ pharmacotherapy in patients with unsatisfactory course.

Somatostatin influence on cells has a wide spectrum, through binding to its SSTR subtype(s), and activation of the second messenger system. These systems include (1) inhibition of adenylate cyclase activity and (2) activity of calcium channels, as well as (3) stimulation of phosphotyrosine phosphatase or (4) MAPK (mitogen-activated protein) kinase activity [17, 20, 21]. The inhibitory effects of somatostatin on adenylate cyclase activity and on the influx of calcium are linked to inhibition of secretion processes.

A high density of SSTRs are expressed in tumors, arising from tissues which are target for the somatostatin [27-31].

Multiple SSTR subtypes are coexpressed by the majority of the SSTR-positive tumors and essential variation in their expression between the different tumor types and among tumors of the same type were described [33-36].

SSTR 2 predominance is generally found in more than 80% of the endocrine pancreatic and endocrine GI tract tumors [29, 31, 37-39].

Different methods have been used for identification SSTR subtypes expression in tissue samples. The most relevant are: the specific mRNA of SSTR detection (e.g. in situ hybridization, RNase protection assays and RT-PCR), using radiolabeled somatostatin analogs and immunohistochemistry. IHC based on SSTR-specific antibodies seems to be widely available and cost effective method which identifies SSTR subtypes – it is worthy to mention that many researchers noticed that this method needs the precise standardization [40-48].

Many articles bring information about SSTR expression using the nuclear medicine methods – for this knowledge we send the reader to the references [49-54].

Pituitary adenomas (PA) in the majority have a benign biological potential. These tumors are classified based on the hormones that are produced by the neoplastic cells (GH, prolactin, adrenocorticotropin, thyrotropin, follitropin, or luteinizing hormone) – some of them can secrete two hormones (GH and prolactin as the most common combination), and rarely, pituitary adenomas are plurihormonal. Clinically non-functioning adenomas (CNFA) lack the typical hypersecretion of the functional pituitary adenomas and do not produce clinical symptoms of hormone excess.

Grossly NETs have tendency to be small, circumscribed, and in Gl tract they can be covered by a flattened mucosa [60] or have the gross appearance of gastric polyps [61]. Microscopically, the predominant pattern of growth may be microglandular, trabecular or insular. The nuclei are regular and normochromatic, mitoses are scanty, necrosis is usually absent, and vascularization is florid. Focal mucin positivity may be present. Immunohistochemically, GI NENs are positive for neuron-specific enolase, chromogranin, synaptophysin, and keratin. NECs may form a large, sometimes fungating mass deeply infiltrating the GI wall and often metastatic to lymph nodes and liver. They are composed of large, poorly formed trabeculae, nests or sheets of anaplastic round, polyhedral to spindle cells, small to fairly large in size, and immunoreactive for general neuroendocrine markers including chromogranln A, synaptophysin, neural cell adhesion molecule (NCAM1/CD56) or neuron-specific enolase [59].

Immunohistochemistry revealed that SSTR 1, SSTR2A, 3 and 5 are expressed in gastrinomas, insulinomas and carcinoid tumors. Immunostaining of the specific antibodies is non-homogenous and shows differences between SSTR subtypes and between commercial antibodies. Generally immunoreactivity for SSTR 2 is localized in the plasma membrane in contrast to SSTR 1, 3 and 5 which stain mainly the cytoplasm.

The pulmonary neuroendocrine tumors include typical carcinoid (TC), atypical carcinoid (AC), small cell carcinoma (SCLC) and large cell neuroendocrine carcinoma (LCNEC). These tumors are characterized by similar microscopic appearance, like other neuroendocrine tumors in the body – they have organoid nesting, palisading and trabecular pattern with mitotic activity and presence of necrosis as the distinguishing features (TC: < 2 mitoses per 2 mm2 and no evidence of necrosis. AC: 2-10 mitoses per 2 mm2 and/or focal necrosis). 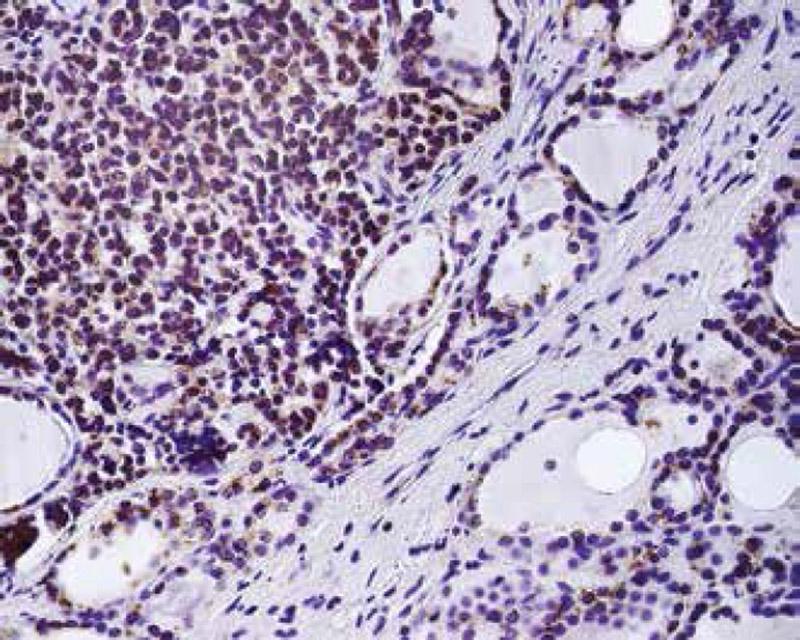 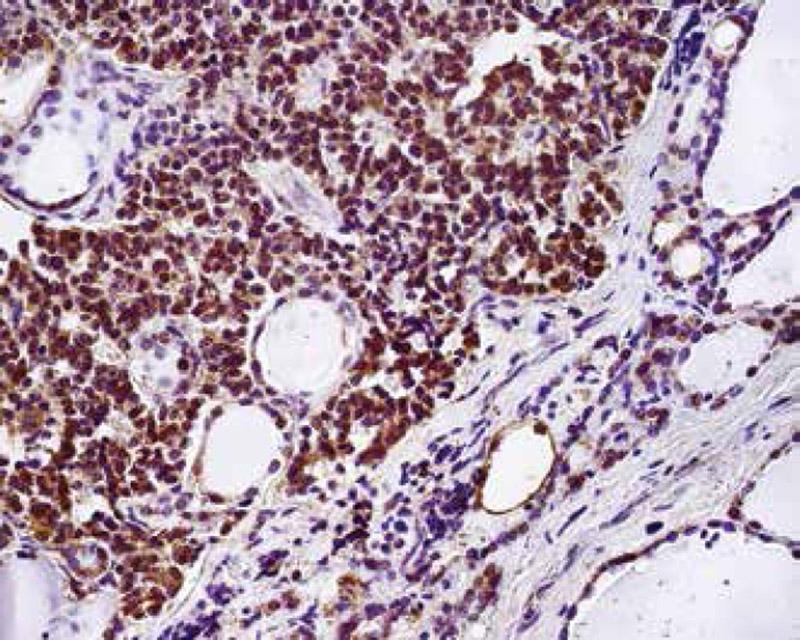 LCNEC is differentiated from SCLC by larger cell size, abundant cytoplasm and prominent nucleoli. Mitotic activity is high (10-11 mitoses/10hpf). Prominent nuclear molding and deposition of hematoxylin-stained material (DNA) in blood vessel walls are characteristic for SCLC. These tumors are positive for chromogranin, synaptophysin and NCAM (CD56), about 50% of LCNECs also express TTF-1.

TC and AC occur in significantly younger patients than SCLC and LCNEC. They present as firm and well-demarcated tumors, with predilection to bronchi (frequently endobronchial growth). TC is evenly distributed in the lung parenchyma, while AC arises more commonly in small peripheral bronchi. Clinical symptoms are related to bronchial obstruction (cough and hemoptysis as the most common), Cushing’s syndrome and carcinoid syndrome are rare.

SCLC has tendency to occur in central location with locoregional spread, commonly accompanied by paraneoplastic syndromes. On macroscopy it presents as a white-tan, soft and friable mass with extensive necrosis and frequent nodal involvement.

LCNEC occurs preferentially as peripheral mass, but may also involve subsegmental or large bronchi. It spreads on visceral pleura and chest wall. Typically LCNECs do not produce clinical symptoms of hormone excess [65-70].

Tsuta et al. demonstrated that SSTR 1,2A, 2B, 3 and 4 have a tendency toward decreased expression in well to poorly differentiated NECs [71].

There is no difference in distribution of SSTR 1-5 compared with TNM parameters [72].

Pheochromocytoma (PCC) and paraganglioma (PGL) are neuroendocrine tumors derived from adrenal chromaffin cells and extra-adrenal paraganglia, respectively. Hereditary tumors are frequently diagnosed before 40 years of age, while sporadic tumors are usually discovered in patients aged 40 to 50 years. Clinical presentation results from effects of secreted catecholamines, including: hypertension, tachycardia, pallor, headache, and anxiety; but up to 25% of pheochromocytomas are asymptomatic. Macroscopically tumors are variable in size and weight (up to > 2000 g), with round to oval and sharply circumscribed presentation. Cut surface shows a dusky red-brown mass with possible marked hemorrhage and necrosis. Tumor cells vary in size and shape and show round nuclei, prominent nucleoli and granular amphiphilic to basophilic cytoplasm. They are arranged in well-defined nests (Zellballen), surrounded by the sustentacular cells. Cell nests can be separated by thin strands of fibrovascular stroma.

Merkel cell carcinoma is an uncommon neoplasm of the skin with neuroendocrine differentiation, which involves commonly head and extremities. It is usually small (from 0.8 cm to 4 cm), pink, solitary nodule, rarely with multiple nodules presentation. Tumor is composed of small, round, blue cells with scant cytoplasm and irregular nuclei with uniformly distributed chromatin. Nucleoli are inconspicuous, frequent mitotic figures and individually necrotic tumor cells are commonly visible. Tumor cells are positive for chromogranin, synaptophysin, neuron-specific enolase and cytokeratin 20 [78-83].

Overall, 76.5% of Merkel cell carcinomas express at least one of SSTRs. SSTR 2A and SSTR 5 are expressed in 59.2% and in 44.9% of tumors, respectively. Expression of SSTRs is not associated with clinical characteristics, Ki67 proliferative index and survival [84].

Neuroblastoma is the most common solid tumor of young children (90% occur < 5 years); it shows minimal to none maturation and is composed of small round blue cells arranged in nodular aggregates separated by fibrovascular septa. Homer-Wright pseudorosettes can be visible. Macroscopically tumor forms large mass with a gray cut surface, often accompanied by hemorrhage and necrosis. Neuroblastoma cells are positive for neurofilament, synaptophysin, chromogranin and neuron-specific enolase [85-90]. Neuroblastomas show expression in 66.7%, 81.5%, 9.3%, 37% and 0% for SSTR 1, 2, 3, 4 and 5 respectively. The favorable histology group of NBs are characterized by higher SSTRs expression than the unfavorable histology group – the researchers indicate significant differences in SSTR 1, 2 and 4 expression. SSTR subtypes expression in normal tissues from the adrenal medulla and sympathetic ganglia are similar to those of ganglioneuromas and ganglioneuroblastomas, with rates being 100% for SSTR 1, approximately 90% for SSTR 2, approximately 40% for SSTR 3, 100% for SSTR 4 and 0% for SSTR 5 [91].

Others studies analyzed SSTR expression in other thyroid malignancies – they also showed that SSTR 5 is commonly expressed in thyroid neoplastic and non-neoplastic entities (86.2-100%) [97-98].

Further research on SSTRs expression in NEN could serve as a base for development and improvement of somatostatin analogs’ pharmacotherapy in patients with unsatisfactory course.