BACKGROUND: This paper is the short review of our preliminary results obtained with 99mTc-EDDA/HYNIC-TOC.

MATERIAL AND METHODS: The total of 495 patients with different neuroendocrine tumors were investigated during last few years.

CONCLUSION: Scintigraphy of neuroendocrine tumors with 99mTc-Tektrotyd is a useful method for diagnosis, staging and follow up of the patients suspected to have neuroendocrine tumors. SPECT had important role in diagnosis. It is also helpful in the appropriate choice of the therapy, including the peptide receptor radionuclide therapy. In the absence of 68Ga-labeled peptides and PET/CT, the special emphasize should be given to application of SPECT/CT as well as to the radioguided surgery.

Neuroendocrine tumors (NETs) are rare tumors originating from neural crest, and can be localized in different organs. They are slowly growing and therefore not easy to detect. The first line diagnosis is made by laboratory analysis and radiological (anatomic) imaging modalities such as ultrasonography (US), computerized tomography (CT), magnetic resonance imaging (MRI) and angiography. The presence of neuroamine uptake mechanisms and/or peptide receptors at the cell membrane of these tumors allow clinical use of specific radiopharmaceuticals for imaging and therapy (theranostics) [1]. Thus, radiolabeled metaiodobenzylguanidine (131 l-MIBG, 123I-MIBG) have been used to detect catecholamine-secreting tumors, while technetium (99mTc)-labeled pentavalent dimercaptosuccinicacid (DMSA-V), sestamibi (MlBl) or tetrofosmin are used only for diagnosis of medullary thyroid cancer. The fact that the majority of NETs express somatostatin receptors provided a possibility for development of various radiolabeled somatostatin analogs for their diagnosis and therapy.

The first in vivo studies were performed with the radioiodinated (123I) derivative of octreotide [2] but had drawbacks such as the high price, unavailability of 123I, time consuming and demanding preparation and predominantly biliary excretion obscuring intra-abdominal tumors. In order to overcome these disadvantages, 111In-DTPA-D-Phe1 -octreotide was developed [3] with a high affinity for somatostatin receptors, easy labeling and predominant elimination by the kidneys. Although 111In pentetreotide was proved to be reliable for the detection of NETs, the potential clinical advantage of 99mTc labeling in comparison to labeling with 111In, led to development of 99mTc-labeled somatostain analogs. 99mTc is not expensive and easily available on site. Physical characteristiscs of 99mTc are more suitable for imaging with gamma camera, leading to the lower radiation burden to the patient allowing the better image quality with lower radiation doses. 99mTc-EDDA/HYNIC-TOC (Tektrotyd) is a radiopharmaceutical indicated for diagnosis of tumors with overexpression of somatostatin receptors (especially subtype 2, sstr2). This paper is a short review of our preliminary results obtained with this radiopharmaceutical.

Scintigraphy of the whole body was performed 2h and 24h after i.v. administration of 740 MBq 99mTc-Tektrotyd, Polatom. Investigation was followed by SPECT of particular region. It was performed using 360° orbit, step and shoot mode, at 30 sec per view. The acquired data were collected in a 128 x 128 computer matrix and reconstructed using filtered back-projections with a Butterworth filter (cut-off 0.6 cycles/pixel, order 5) and iterative reconstruction. If necessary, the study was supplemented with liver/spleen radiocolloid and/or bone diphosphonate scintigraphy. Before study therapy with somatostatin analogs was withdrawn, mild laxatives were introduced, patients were fasting and were well hydrated. The study was performed with ECAM gamma camera and computer (ESOFT), using high resolution collimator and one photopeak activity (140keV ± 20%).

Whole body and SPECT images were first evaluated visually by two experienced nuclear medicine physicians. Visual appearance of an increased focal uptake of tracer in the suspected tumor site was considered a positive finding. Subsequent semiquantitative analysis was limited to cases with positive findings to compare the tumor uptake of radiopharmaceutical to non tumor tissue in NETs on SPECT and whole body imaging. For that purpose, tumor to non/tumor (T/NT) ratio was calculated after drawing the region of interest around the lesion and at the corresponding contralateral area on both whole body and SPECT images. 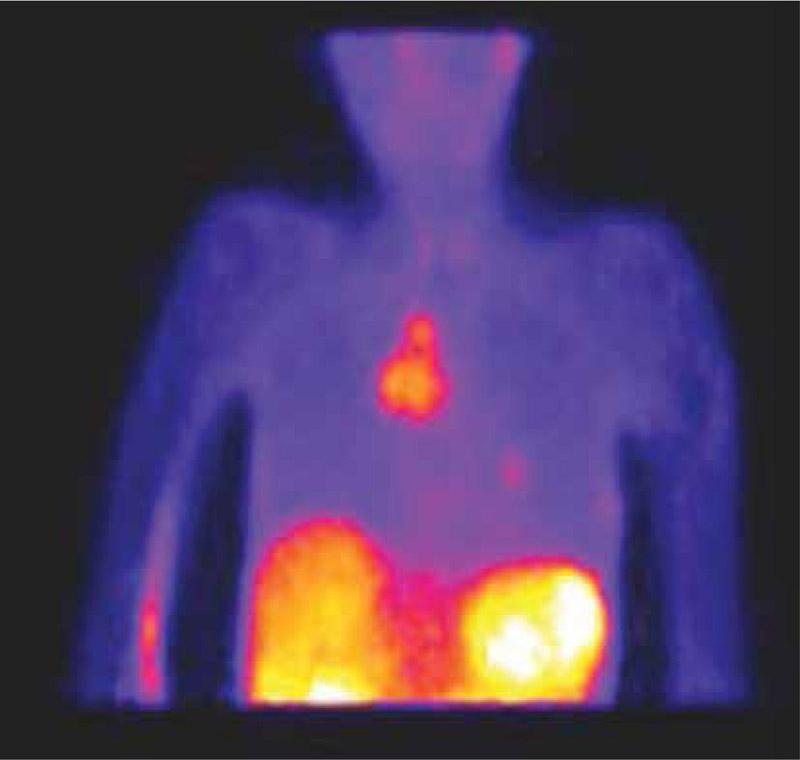 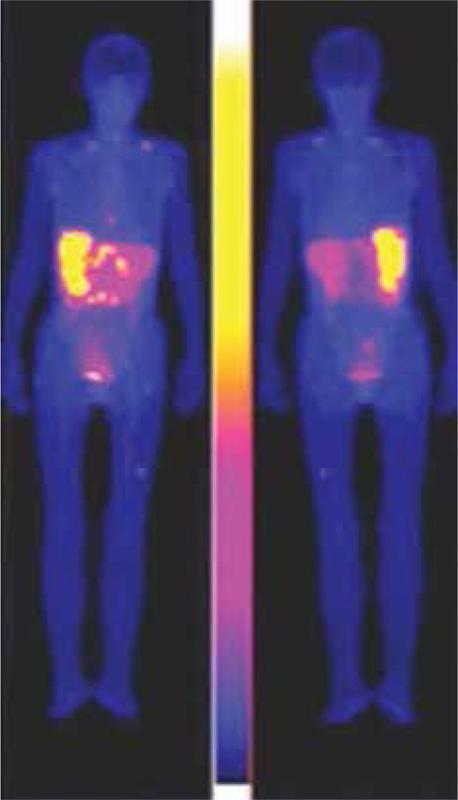 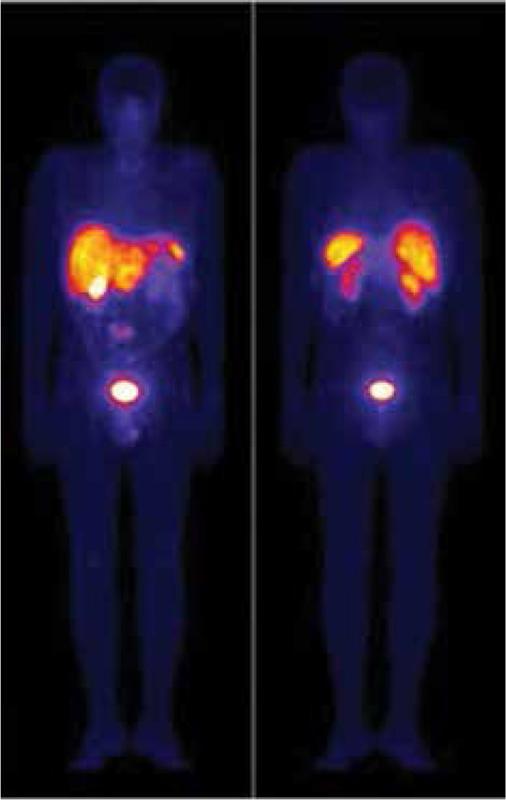 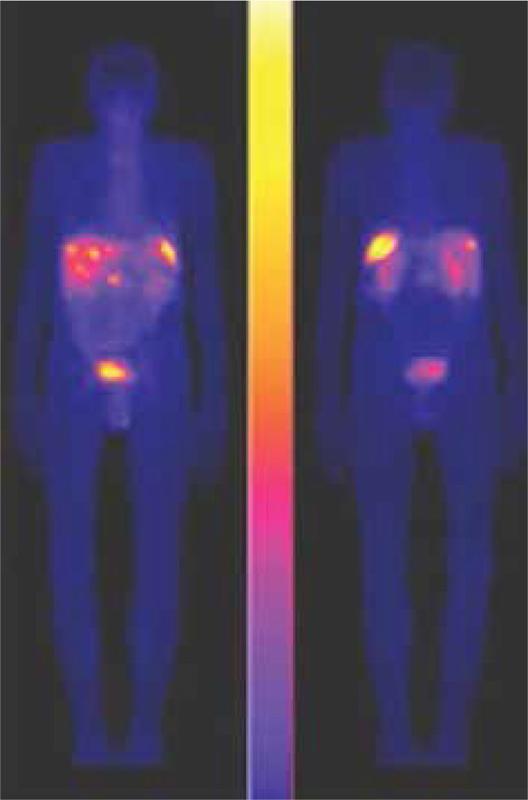 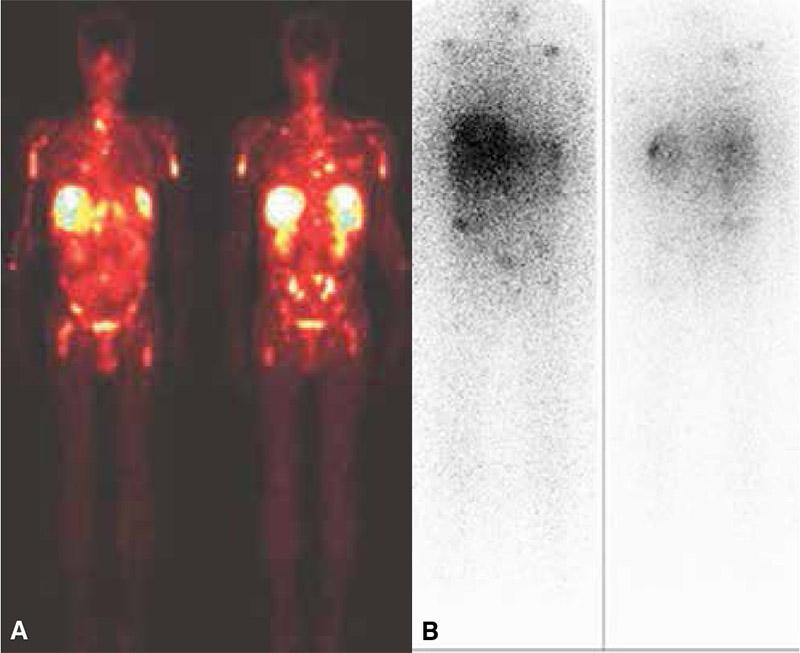 Figure 5. Multiple metastases in bones, lung, liver. A. scintigraphy with 99mTc-Tektrotyd; B. therapy with 90Y-DOTATATE

Our results proved high sensitivity, specificity, accuracy, as well as positive predictive value. The additional value of SPECT is confirmed in 25% of patients as well as estimation of T/NT ratio. In FP patients, mainly inflammation was confirmed, as well as physiological uptake of radiopharmaceutical increased on particular foci because of previous surgery. In patients with FN findings, the cause were particular hystological tumor characteristics (mainly low differentiated tumors, dedifferentiated tumors...) or very small lesions. They were mainly confirmed with other nuclear medicine and other (morphological) methods. Correllation of results of 99mTc-EDDA/HYNIC-TOC scintigraphy with results of other imaging methods, as well as with laboratory analysis and clinical parameters will be evaluated further.

Our previous results [4] mainly in patients with NET of unknown origin or digestive NETs showed sensitivity 87%, specificity 86%, positive predictive value 95% negative predictive value 67% and accuracy 87%. Our previous results in lung lesions [5, 6] showed 87-88% sensitivity, 84-85% specificity, and 86-88% accuracy. This investigation has been reported to be usefull method for the detection of NET of different origin and localization, the results were similar to those obtained with 111In-pentetreotide as well as reliable for the appropriate choice of therapy [7-15].

Results of other authors are similar. Thus, Gabriel et al. [16] in GEP tumors obtained sensitivity of 80%, specificity of 94.4% and accuracy of 82.9%, and recommended it as an accurate procedure. They [17] revealed a higher sensitivity of this pharmaceutical compared with 111In-Octreotide.

Some other somatostatin analogs, very similar to 99mTc-EDDA/HYNIC TOC have been recently investigated and recommended for clinical use [23-30]. Some of them are: 99mTc-EDDA-tricine-HYNIC-NATE, 99mTc-EDDA/HYNIC-octreotate, 99mTc (HYNIC-OC, HYNIC-TOC and HYNIC-TATE) and 111In (DTPA-OC and DOTA-TATE), 99mTc-demotate, 99mTc-P829. Introduction of hybrid systems (SPECT/CT, SPECT/MRI), additionally contributed to the accuracy and clinical validity of this method [31, 32]. A step forward was also made with [33, 34] the potential use of radio-guided surgery.

18F-FDG PET/CT can be used for detecting of low differentiated or heterogenous tumors [35]. However, other positron emiting radionuclides are recommended such as 18F-fluorodopamine, and, the most widely used, 68Ga-labeled peptides. In spite of superior resolution, short imaging time and imaging whole body in three dimensions, the price and availability of use of this pharmaceuticals still do not allow wide application [36, 37].

Our results show that scintigraphy of neuroendocrine tumors with 99mTc-Tektrotyd is a useful method for diagnosis, staging and follow up of the patients suspected to have neuroendocrine tumors. SPECT had important role in diagnosis. It is also helpful in the appropriate choice and monitoring of the therapy, including the radionuclide one. In the absence of 68Ga-labeled peptides and PET/CT, the special emphasize should be given to application of SPECT/CT as well as to the radioguided surgery. Correllation of results 99mTc-EDDA/HYNIC-TOC scintigraphy with results of other imaging methods, as well as with laboratory analysis and clinical parameters will be evaluated further.

The study was performed owing to grant Ministry of Science of Serbia number 175018; The majority patients were investigated in cooperation with Clinic for Endocrinology and Metabolism, Clinical Center of Serbia