BACKGROUND: Aim of this study was to determine the value of technetium-99m-hydrazinonicotinyl-Tyr3-octreotide (99mTc-EDDA/HYNIC-TOC) in patients with somatostatin receptor (SSR) positive tumors of head and neck region.

Somatostatin receptor scintigraphy (SRS) is considered as an imaging modality of choice for many neuroendocrine tumors (NETs). NETs of head and neck are rare group of neoplasms. NETs originate from neural crest cells and have both neural and endocrine cell features [1]. Head and neck NETs can be divided in two groups: epithelial derived tumors (typical carcinoid, atypical carcinoid and small cell carcinoma) and neurally derived tumors (paraganglioma, olfactory neuroblastoma) [2]. Rarely, NETs from other sites can also metastasize to the head and neck region [3]. Some other types of head and neck tumors; medullary thyroid carcinoma (MTC), meningioma, Hurthle cell carcinoma, also showed somatostatin receptors (SSRs) on the cell membrane surface [4].

MTC is a rare malignancy and in comparison with other types of thyroid carcinoma, MTC is more demanding and more difficult to treat with higher rates of recurrence and mortality. Different radiopharmaceuticals are used for detection of occult metastatic disease and SRS with 99mTc-EDDA/HYNIC-TOC is the promising method [13-15].

The aim of this study was to determine the value of 99mTc EDDA/HYNIC-TOC in patients with neuroendocrine and other SSR positive tumors of head and neck region in terms of sensitivity, specificity, diagnostic accuracy. Impact on patient management was also evaluated.

All patients gave their written informed consent for the study. This is a retrospective study of 16 patients who referred to our Department for a routine examination between February 2011 and March 2016. 99mTc-EDDA/HYNIC-TOC was prepared from a commercially available kit (Tektrotyd, Polatom, Otwock, Poland) following the manufacturer’s instructions. Patients were intravenously injected with an average activity of 670 MBq of the tracer. Imaging was performed at 2 and 4 hours with a double-headed gamma camera (SymbiaT; Siemens Medical Solutions, Erlangen, Germany). Planar whole body (WB) and single photon emission computed tomography (SPECT) images were acquired at 2 and 4 h. Single photon emission computed tomography/computed tomography (SPECT/CT) images of the head and neck region, or other region of interest, were acquired at 4 h. SPECT image data were reconstructed using FLASH-3D iterative reconstruction with 8 iterations and 8 subsets [16]. All images were reconstructed using syngoMI workstation (SynogMI VA60B; Siemens Medical Solution, Erlangen, Germany).

Quantitative data are presented as their mean ± standard deviation (median; range), if not otherwise stated. Findings on SRS images were classified as true-positive (TP), true-negative (TN), false-positive (FP), or false-negative (FN), as compared to the reference standard (conventional imaging methods, clinical and biochemical follow up). 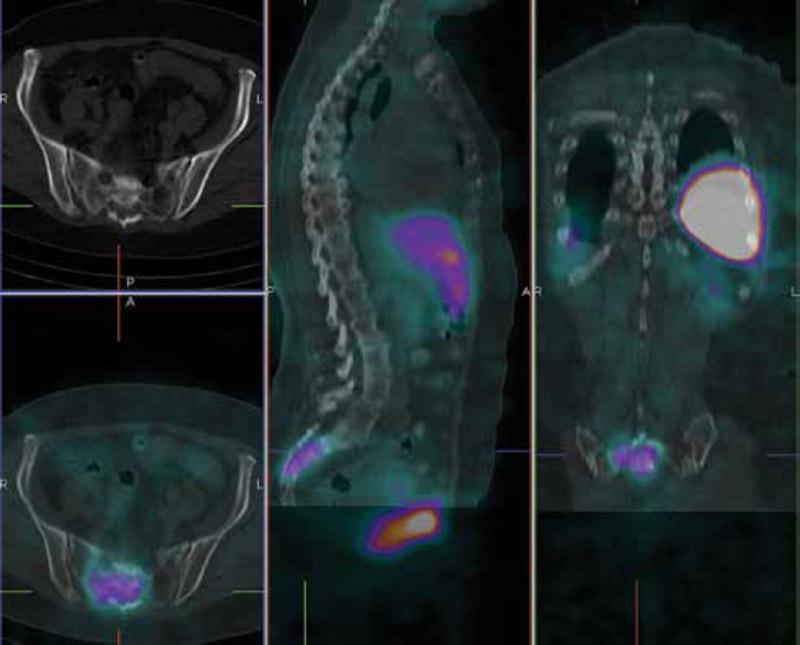 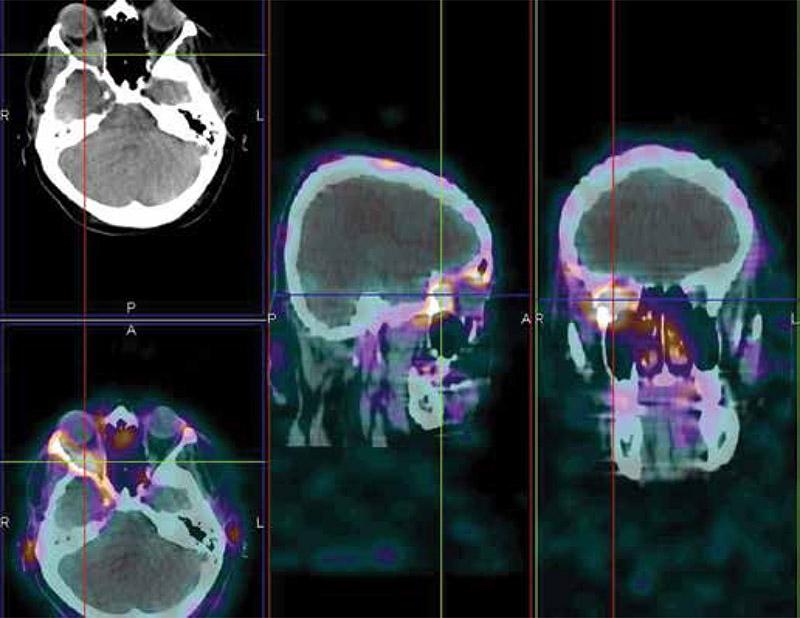 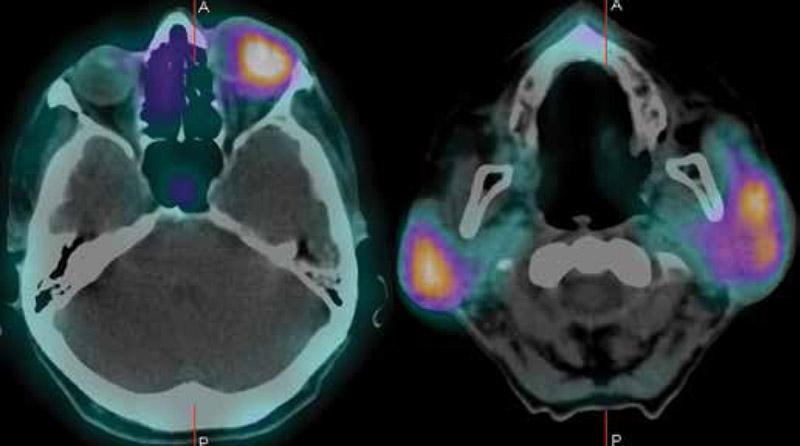 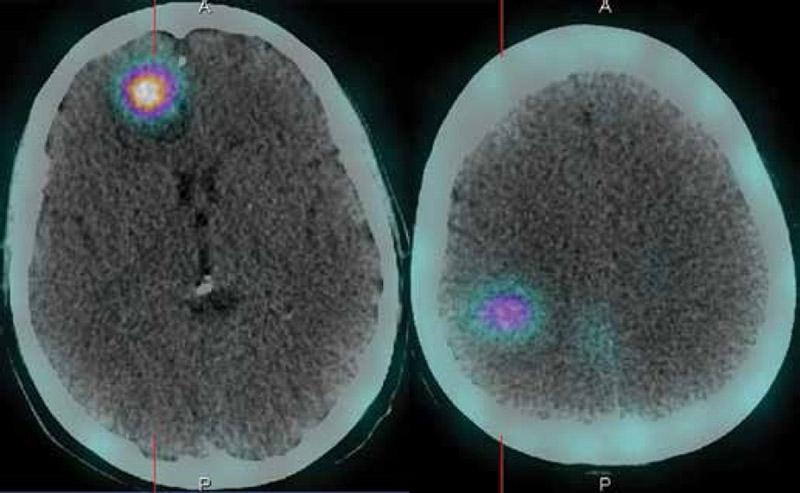 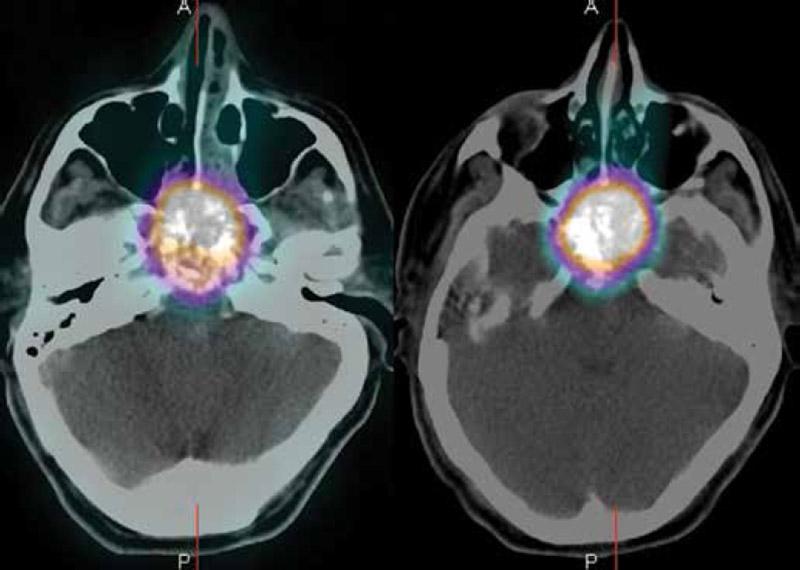 Cases number 13 and 15, both MTC, were TN with fairly long follow up period of 45 and 53 months, respectively. During this follow up numerous imaging techniques were performed in both patients including whole body PET/CT, MSCT (of the neck, thorax and abdomen region) and once per year US examination of the neck. Once in a year during follow up period patients were admitted to the hospital and on each occasion one of mentioned imaging modality (PET/CT or MSCT) was performed together with US of the neck region.

In five patients (cases 4, 7, 10, 11 and 14) distant spread of disease to skeletal system was found. In these cases 99mTc-EDDA/HYNIC-TOC findings upstaged disease to stage IV (distant metastasis). This changed initial staging done by conventional imaging methods. In all this cases “cold” SSAs were introduced. In two additional patients (cases 2 and 16) “cold” SSAs were also introduced after positive scintigraphy. Treatment of one patient (case 14) was changed to PRRT after positive scintigraphy scan. In overall, on a clinical basis 99mTc-EDDA/HYNIC-TOC scintigraphy provided additional information in 50% of patients, with impact on patient management in the same percentage of patients. Distant metastases were found in 56% of patients (9/16). Metastatic bone disease was the most common site of distant metastases in 31% of patients (5/16). Other sites were lymph nodes in 25% (4/16), lungs in 12% (2/16), brain in 6% (1/16) and liver in also 6% (1/16). In one patient (case 3) direct extension of tumor from eyelid and orbital cavity to sphenoid bone was seen. In this patient FP result (in terms of NET spread) was seen in both parotid glands due to chronic inflammatory changes of salivary glands (Sjogren’s syndrome, Figure 4).

In group of patients with NEC (patients 1, 2, 5, 7 and 16) PET/CT and US were used in all patients as reference imaging modality for follow up, while in patients 1, 2 and 5 (because of the neck or head and neck involvement) additional MRI of the head and/or neck was performed. No difference between imaging modalities (99mTc EDDA/HYNIC-TOC vs. 18F-FDG PET/CT or MRI) was noted. In group of NEC distant metastasis were found in 60% of the patients (3/5).

Precise diagnosis and staging are of incremental value in directing therapy for tumors of head and neck region. Surgical resection is still first choice treatment for a patients with head and neck malignancies, including NET, MTC and other types of SSR positive tumors. In a metastatic disease multiple options are available. In patients with positive finding on SRS one of these options are “cold” SSAs. SSAs are used to control hormone related symptoms. Patients using SSA showed symptomatic and biochemical improvement. SSA anti-tumor effects are still under investigation, they have direct impact on proliferative signaling pathways, on activation of apoptosis, on angiogenesis and on tumor stabilization [17, 18].

Although Hurthle cell carcinomas do not belong to the traditional group of NETs, positive SSR in these tumors could provide, especially in negative radioiodine cases, new treatment option like PRRT [4, 19, 20].

Somatostatin scintigraphy of receptors type 2 with radiolabeled octreotide has been shown to be very useful in the meningioma diagnosis [21-23], in their published study Wang et al. showed that 99mTc-HYNlC-octreotide SPECT/CT SRS is a sensitive method for detecting meningioma [24]. Several authors investigated this topic using 68Ga-DOTA-peptides PET/CT [25]. We had only one patient with meningioma and 99mTc-EDDA/HYNIC-TOC SPECT/CT in this case provided additional information concerning tumor recurrence and extension. Planned radiotherapy target volume was slightly modified based on SPECT/CT data. Improved treatment planning for meningioma using 68Ga-DOTATOC PET/CT is more and more available method [26-28]. Usefulness of 99mTc-EDDA/HYNIC-TOC SPECT/CT in this indication is still to be investigated.

“Cold” SSAs were introduced in cases number 2, 4, 7, 10, 11, 14 and 16. In cases number 2 (CUP NEC) and 16 (CUP NEC) “cold” SSAs were introduced to reduce the number of flushing episodes and to improve general clinical condition of patients. Good clinical response to the treatment with reduced number of flushing episodes was noticed after introduction of long-acting SSA.

In five other cases (four MTC and one NEC of larynx), based on positive expression of somatostatin receptors, “cold” SSAs were introduced as antineoplastic treatment but no beneficial effect and no significant improvement in the natural course of the tumor was noted. More evident was an improvement in clinical symptoms as general weakness and weight loss in all the patients. Currently, randomized control studies referring on antitumor effect in patients with MTC, do not exist and only case series or studies of limited value are published, which were not able to demonstrate any consistent antitumor somatostatin effect [29-32].

According to Clarinet study (Controlled Study of Lanreotide Antiproliferative Response in Neuroendocrine Tumors), usage of long-acting SSA was associated with significantly prolonged progression-free survival among patients with metastatic enteropancreatic neuroendocrine tumors of grade 1 or 2 (Ki-67 < 10%) [33, 34]. This positive antineoplastic result was not seen in our very small group of patients with MTC and NEC (n = 7) that received “cold” SSA.

There are a number of limitations in this study; retrospective design, sample size was small, group consisted of patients with heterogeneous population of different SSR positive primary tumors (NET, MTC, meningioma, Hurthle cell carcinoma and unknown primary NET tumor with metastases in head and neck region in two patients).

In our subgroup of NETs only grade 2 and grade 3 NETs were present, we didn’t have well-differentiated (low grade) NETs and this could have significantly impact study results. Studies investigating larger and more homogeneous populations are needed.

99m-Tc-EDDA/HYNIC-TOC SRS shows high accuracy in detecting SSR positive tumors. SRS is an excellent imaging modality and reliable tool in the evaluation and treatment planning of patients with SSR positive tumors of head and neck region.

Written informed consent was obtained from all patients.